Hi Team
Yet more reviews
Yesterday I was out at EUREKA MINIATURES and as usual I was treated to a sneak peek at some of the upcoming releases and some of the currently available but not well known products
Firstly a look at some cute 'Pulp' characters.
I really like the female sculpts that EUREKA produce. The always look so 'Girly' rather than simply male figures with longer hair and breasts.
These US G.I Janes' are excellent examples:
The ladies can be purchased with backpacks and Garrison Caps / bareheaded or if you're so inclined with Rocket Packs and 'Futuristic' helmets. 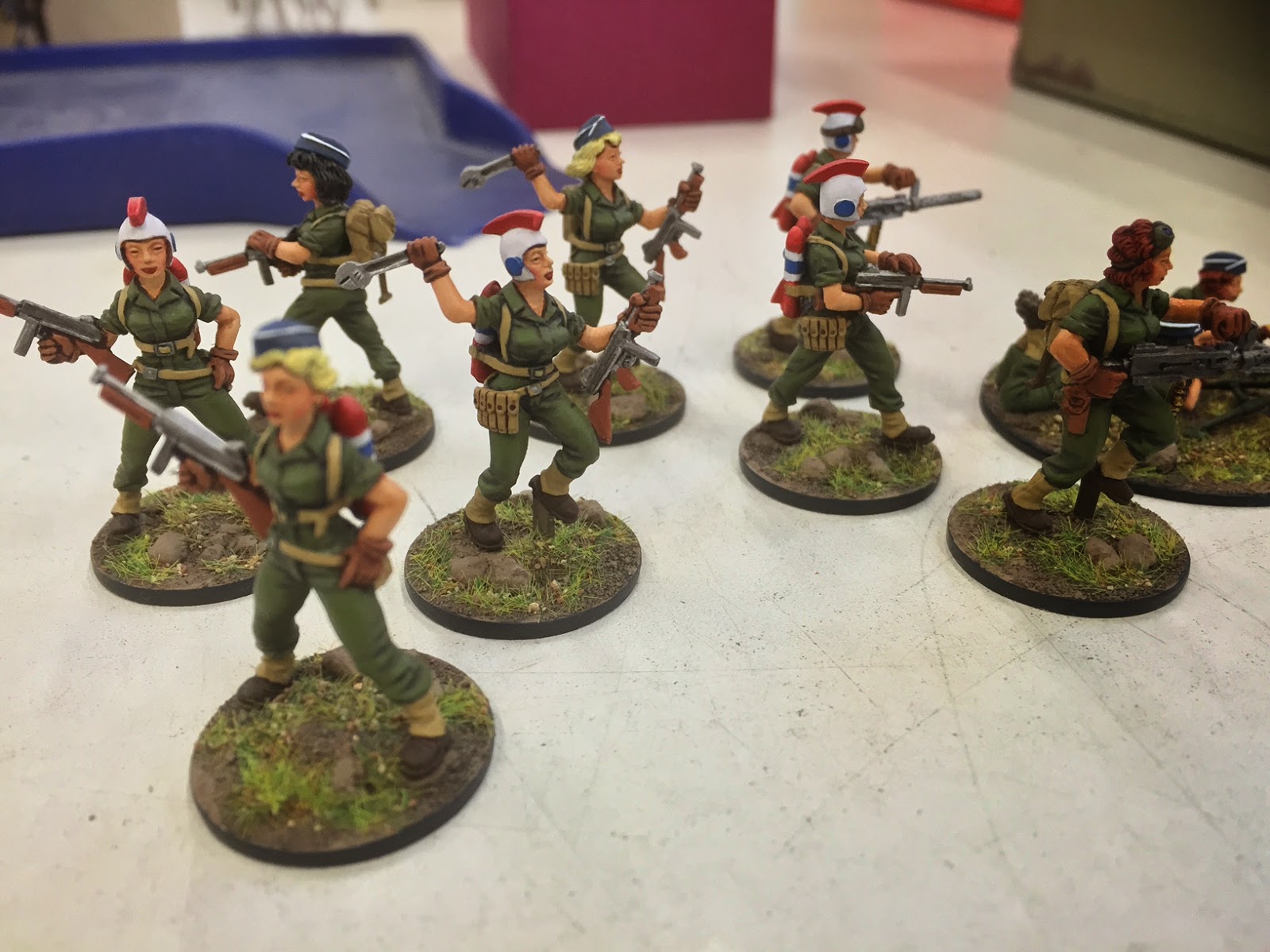 BELOW: The MG Team is my favourite.
I can just see this young lady lying prone behind this MMG with her feet casually swaying to and fro as she sends some tracers down range,... 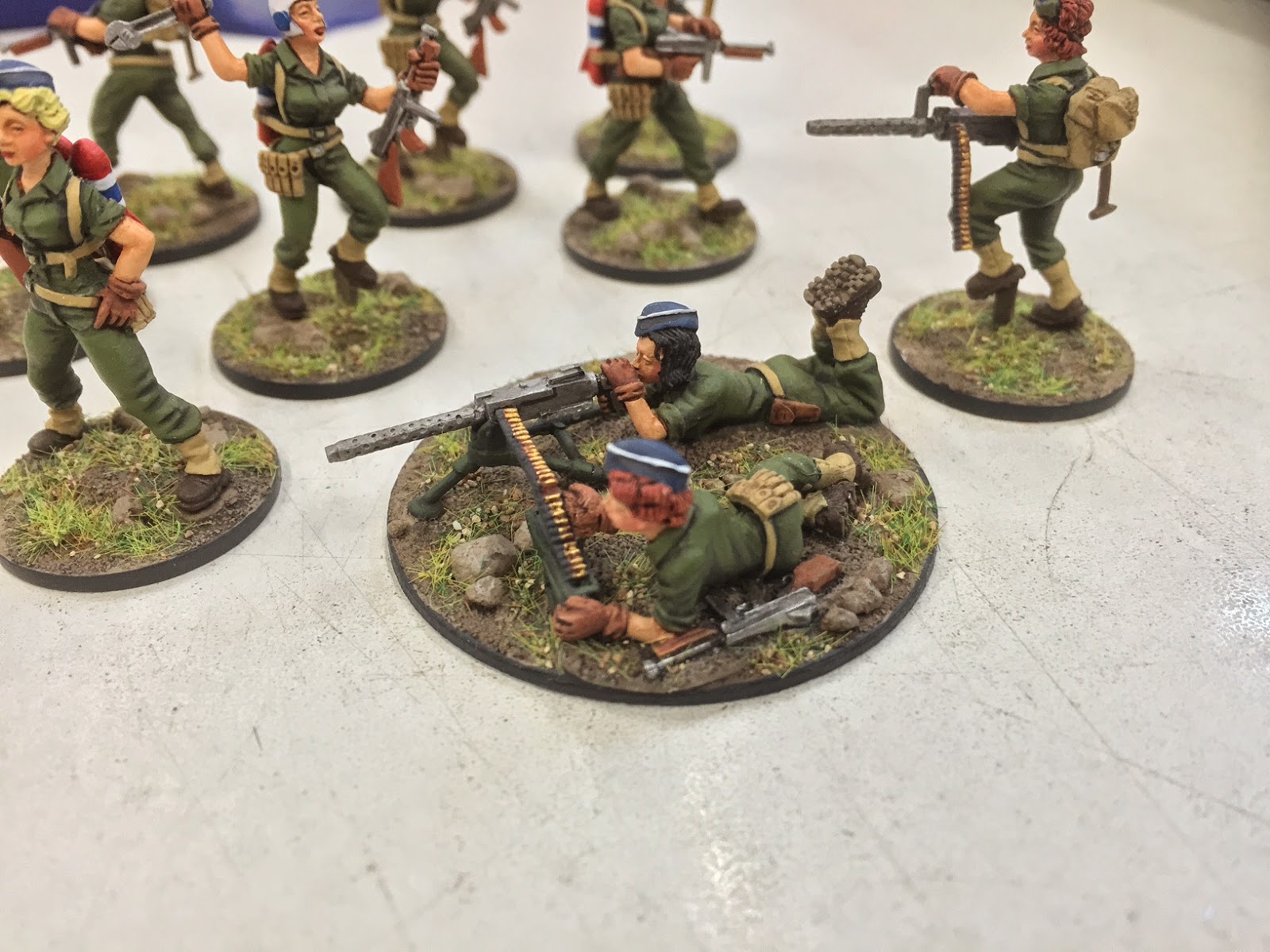 BELOW: Seems Rosie the Riveter is not content on the production line anymore,...
She means to do some harm to the vile Nazis with her spanner! 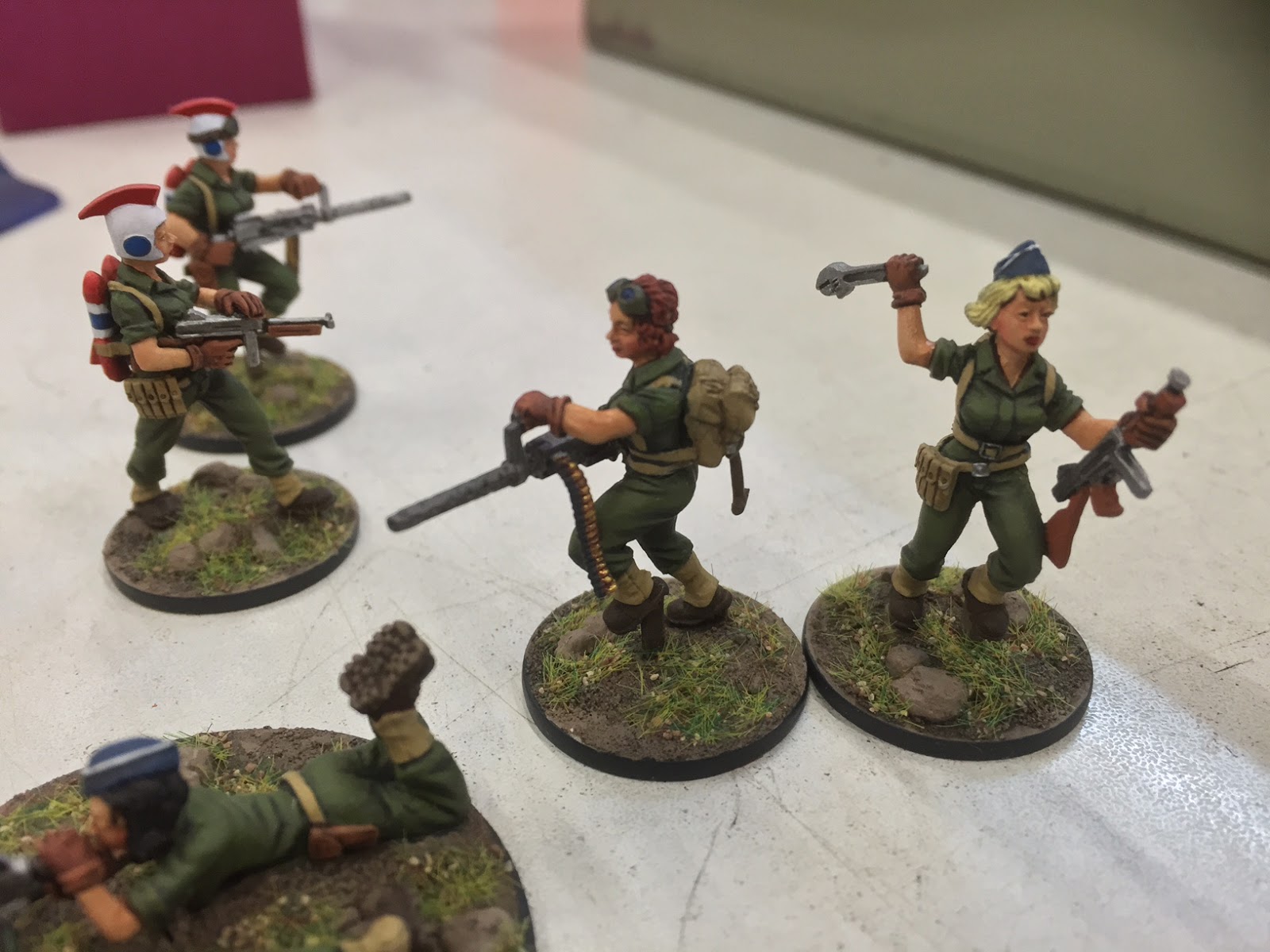 Now Last time I posted I mentioned that GUNNER DUNBAR (GD) was now taking commissions to paint miniatures.
I recently sent him some EMPRESS MINIATURES 28mm Modern Australians.
The EMPRESS MINIATURES are very nice sculpts and the fit in very well with my predominantly EUREKA MINIATURES Afghanistan Campaign collection.
Firstly to the actually painting that Dan did.
I'm simply blown away at how well GD captured the Disruptive Pattern Camouflage Uniform  (DPCU) 'Oz Cam' pattern.
Not only are the colours and pattern spot on, but they subtle shading and subdued style works perfectly in this scale
He also added Goggles to the Helmets (with Green stuff I suspect) free of charge and without my prompting!!!!
How cool is that?! I mean, it hadn't even crossed my mine to request the modification but it's an obvious one really as ALL Australian Troops are issue Eye Protection as standard and no Digger would leave his FOB without them on him.
(Mods were done AFTER these photos were taken)
I could have had them painted in DigiCam, DPDU (the 2nd 'D' is for Desert) or DPCU.
I chose DPCU as it was the most common pattern used throughout Australia's commitment to OP SLIPPER (2001-14)
The photos speak for themselves.
Again, I cant recommend GD highly enough. 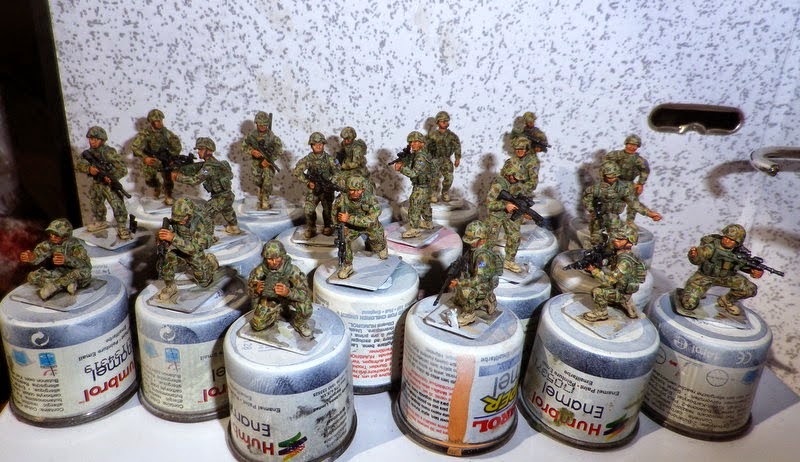 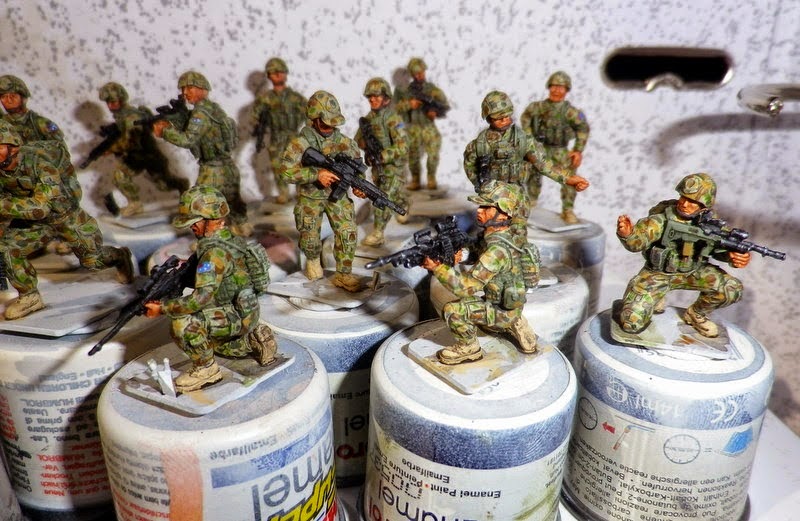 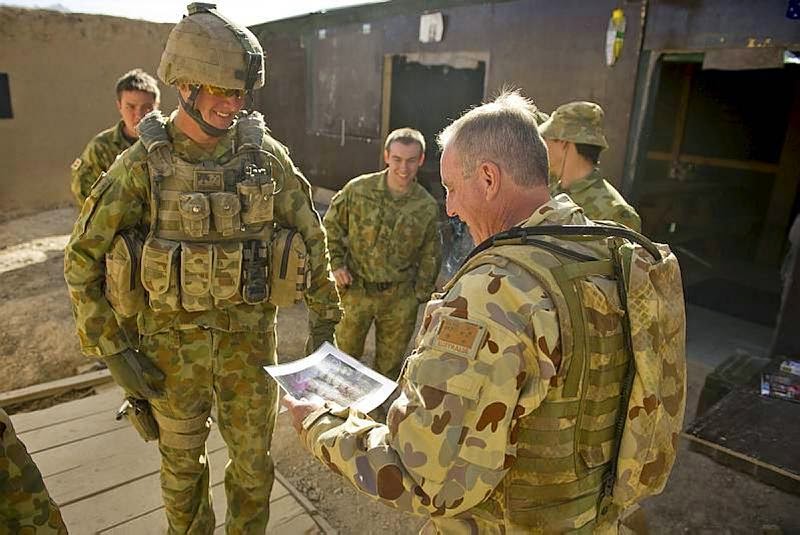 Now as for the actual miniatures.
They are excellent.
As far as I know no one else does Aussie Diggers in 28mm apart from some SASR types that EUREKA do on Motorcycles and Quad Bikes
The sculpting is crisp with little flash to speak off. The range is comprehensive and there are no 'silly' poses.
One criticism,...
No self respecting Digger would EVER use his master hand to make a hand signal.
This chap below would get his arse so kicked by the Platoon Sergeant to using his master hand and taking his eyes away from where his muzzle is pointing whilst on patrol!!! 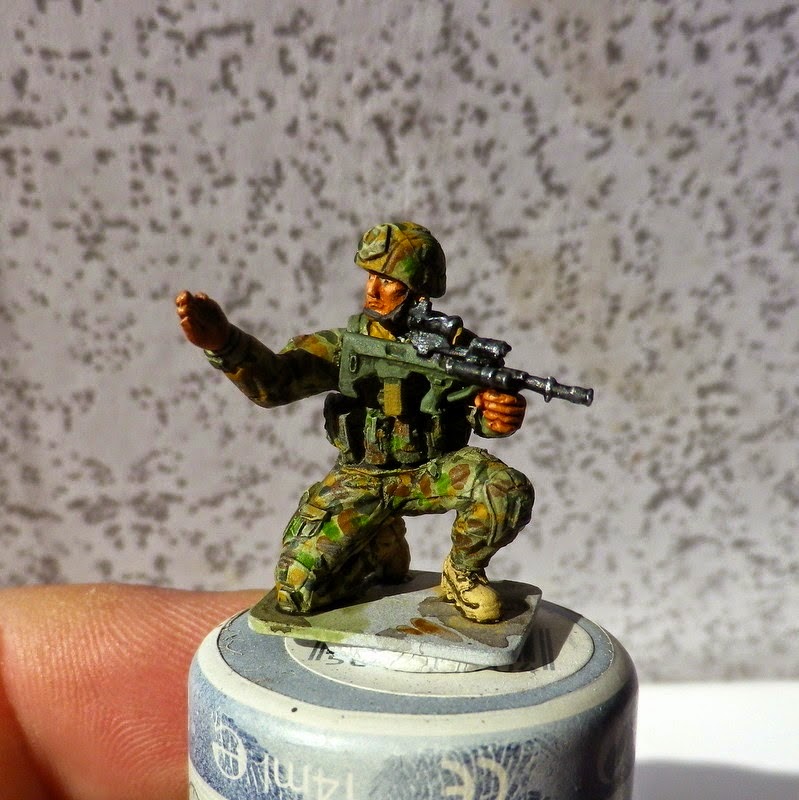 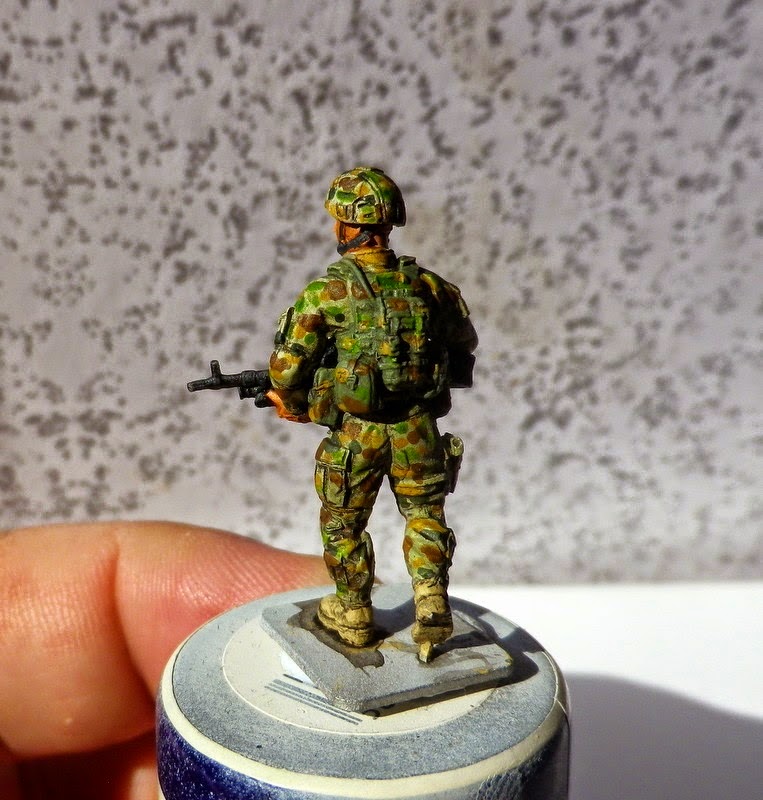 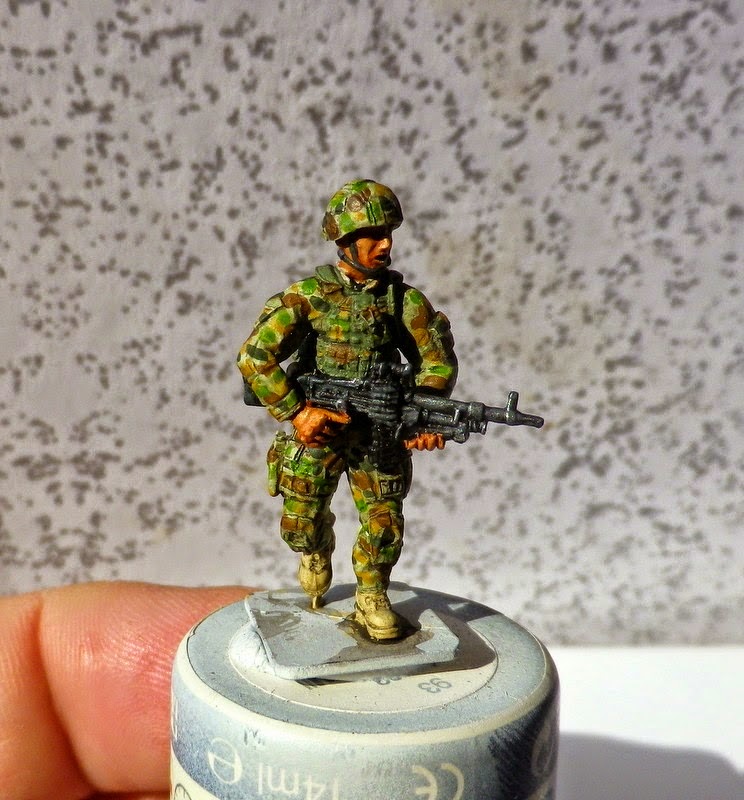 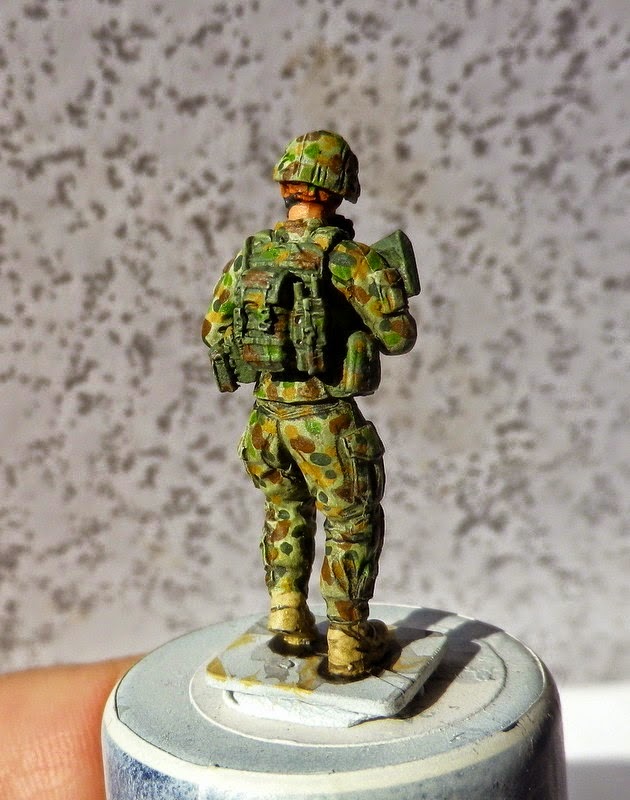 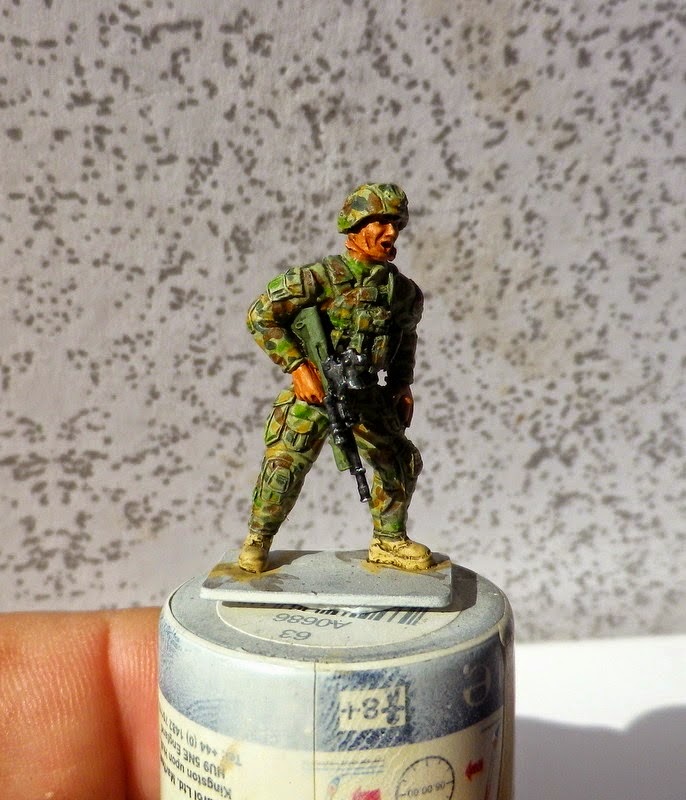 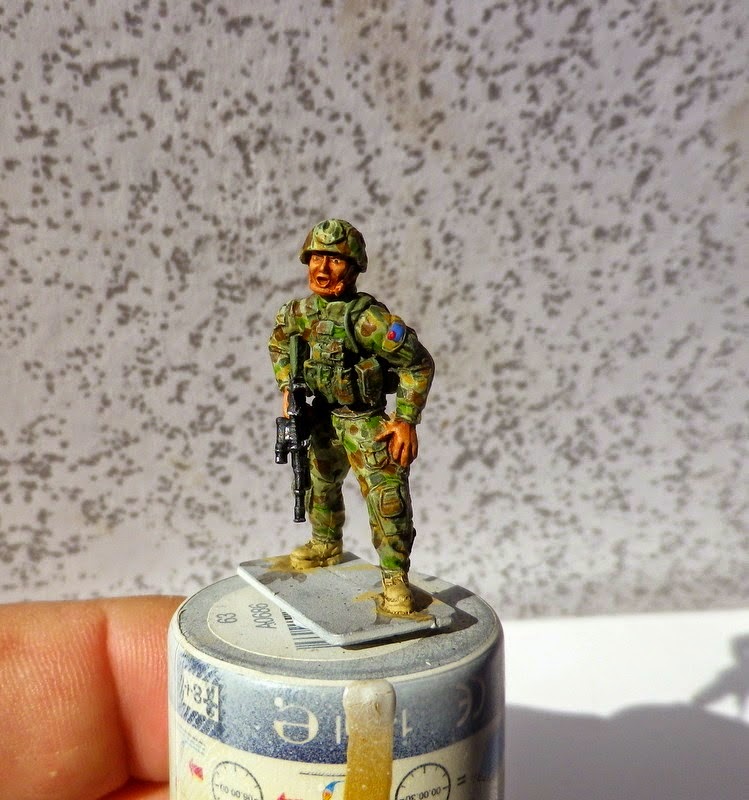 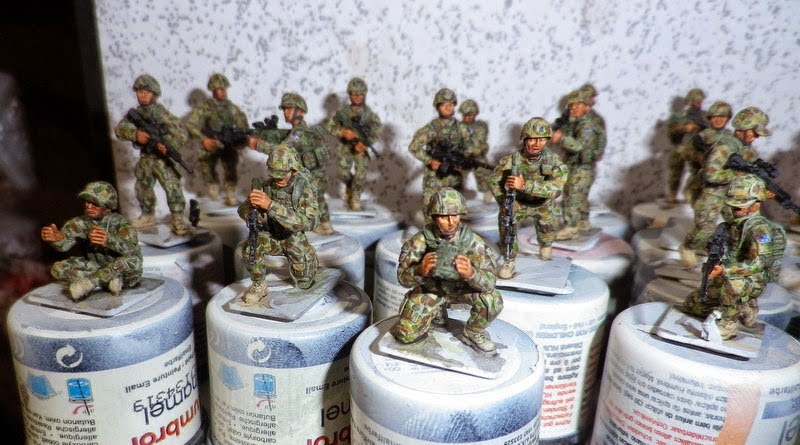 I purchased these Diggers from ELITE MINIATURES AUSTRALIA whom I HIGHLY recommend to anyone in Australia or New Zealand!
Service is OUTSTANDING and the owner Nathan is a top bloke and Ex Australian Soldier so he knows his stuff.
Anyway.
That's all for now.
More reviews shortly including a look at Chain Of Command V Bolt Action.
Posted by Trailape at 7:35 PM 5 comments:

Hi Team
I've a couple of reviews I need to share.
First I need to tell you about a FANTASTIC Painting service now available here in Australia.
My good mate 'Gunner Dunbar is now taking Commissions to paint your miniatures.
I've been having miniatures painted by Dan for some time now and I can tell you that he's the most talented artist I know who is currently 'painting for profit' at a price that wont cause your Minister For War and Finances to have a meltdown.
He is talented, quick, outstanding value and his communication with you the customer is beyond anything I've experienced with other painting services.
Not only will he paint your miniatures but he will modify them and or build them.
you can see Gunner Dunbar's rates and examples of his work here:
GUNNER DUNBAR PAINTING SERVICE
http://gunnerswargamming.blogspot.com.au/2015/03/now-taking-commissions-gunners-painting.html
Here are some photos of just some of his outstanding work: 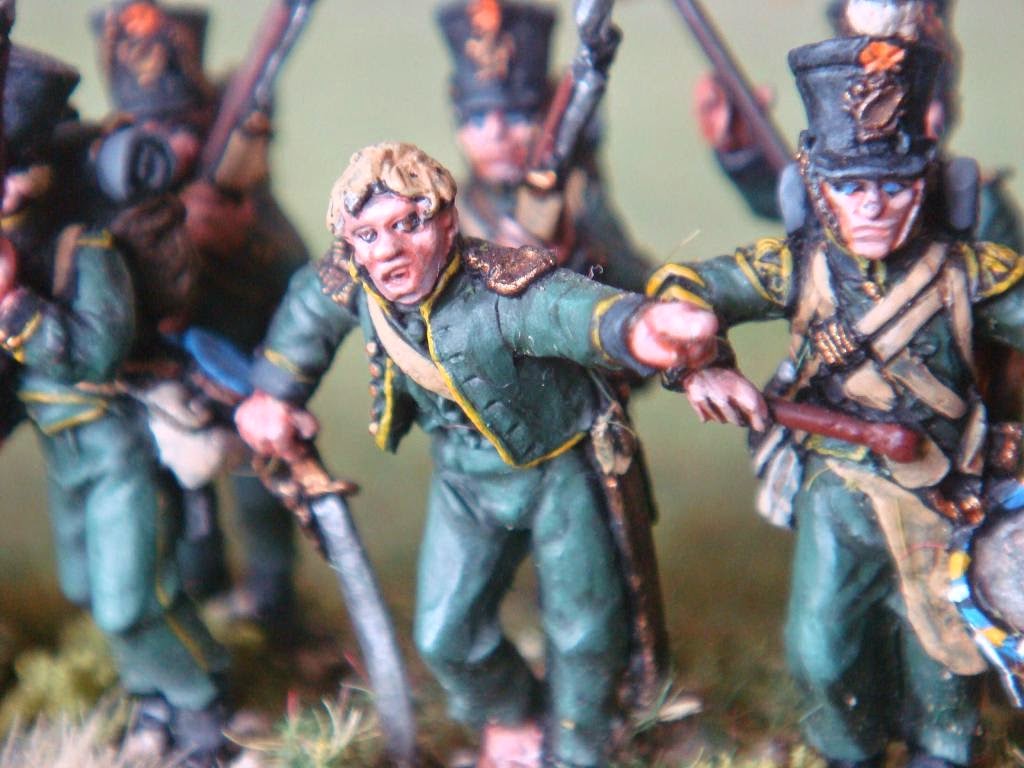 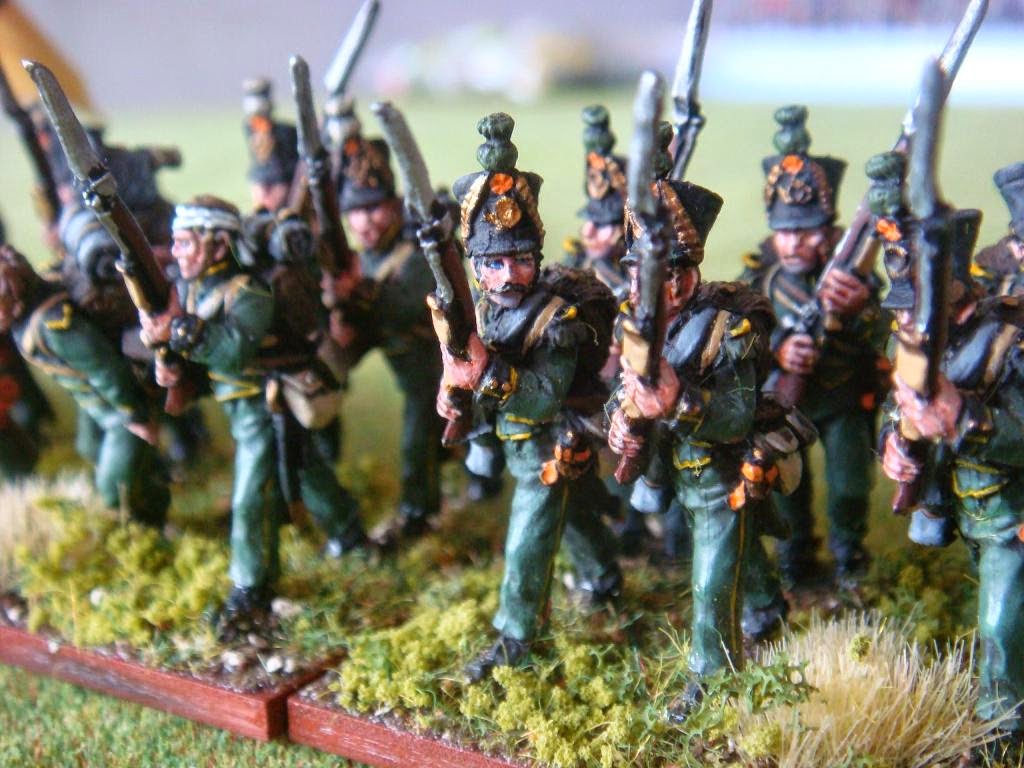 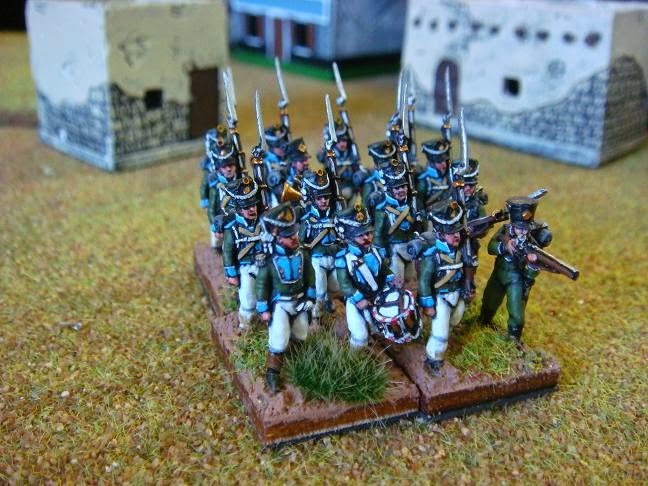 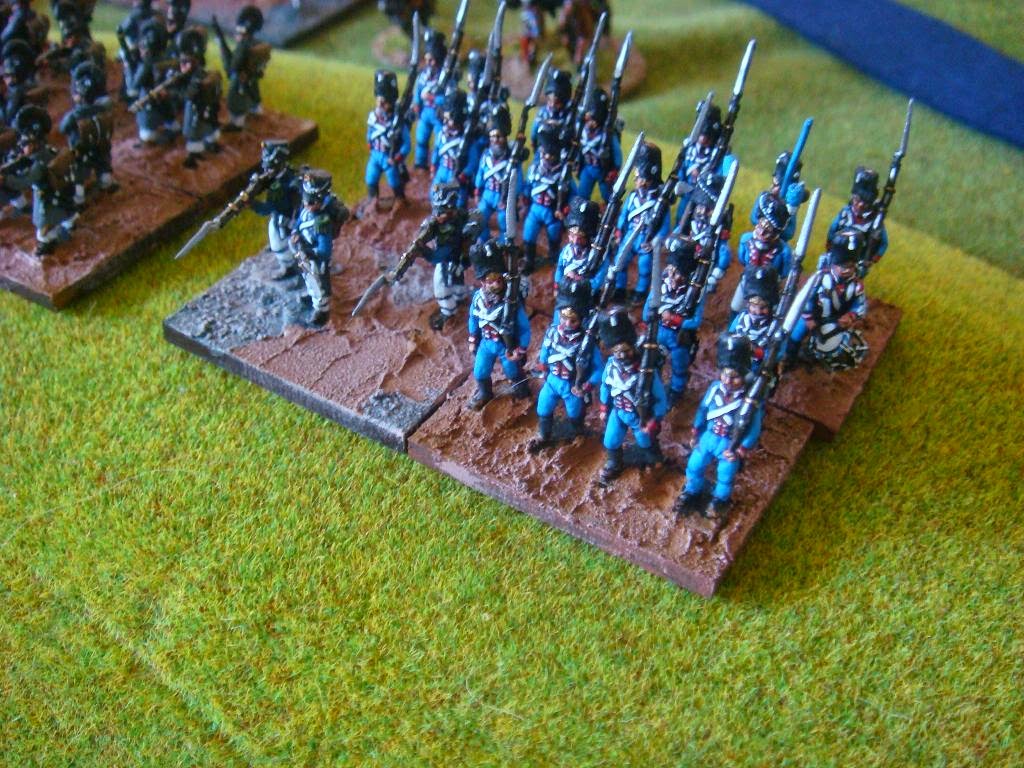 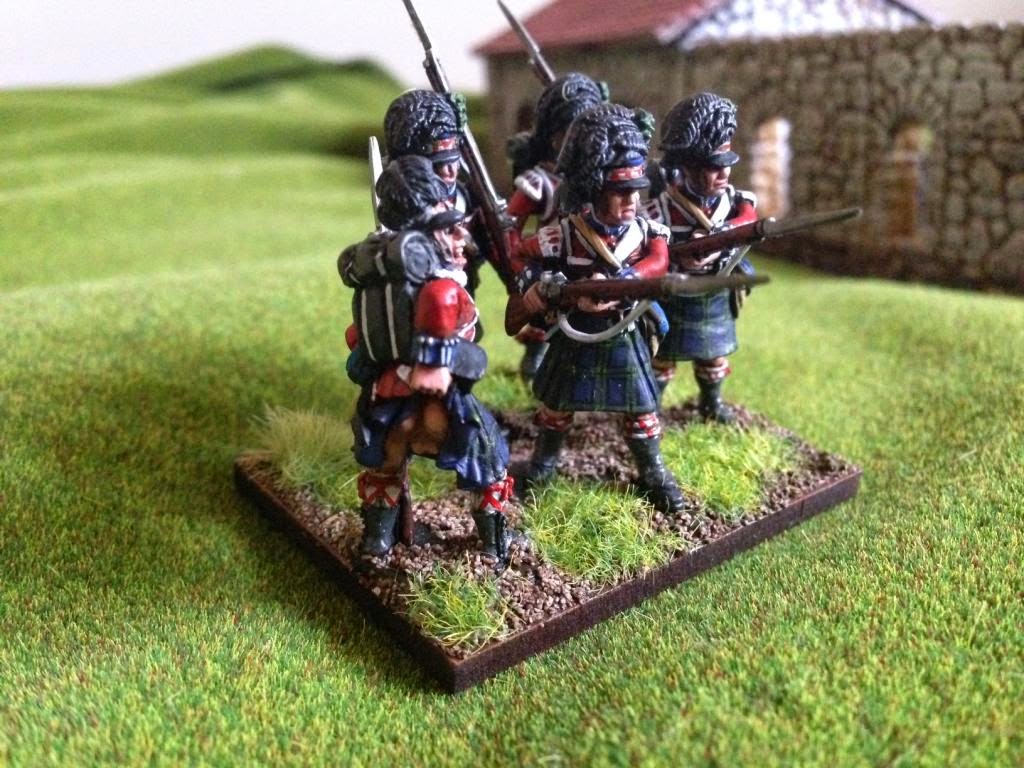 ABOVE AND BELOW: Tartan!!!! 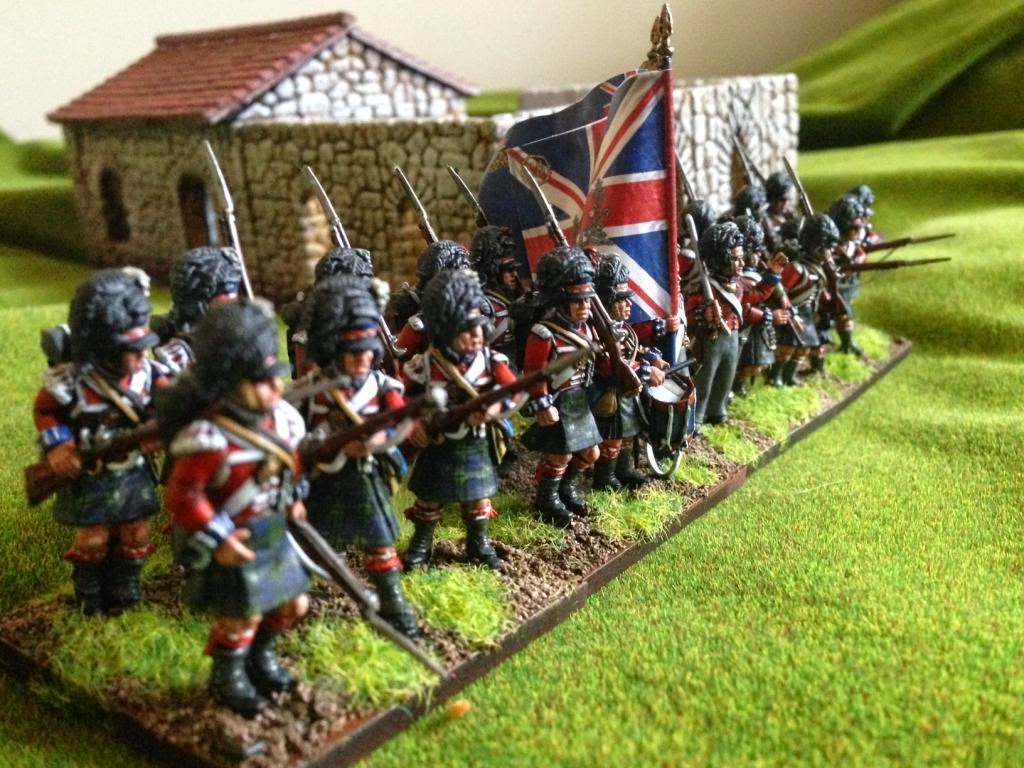 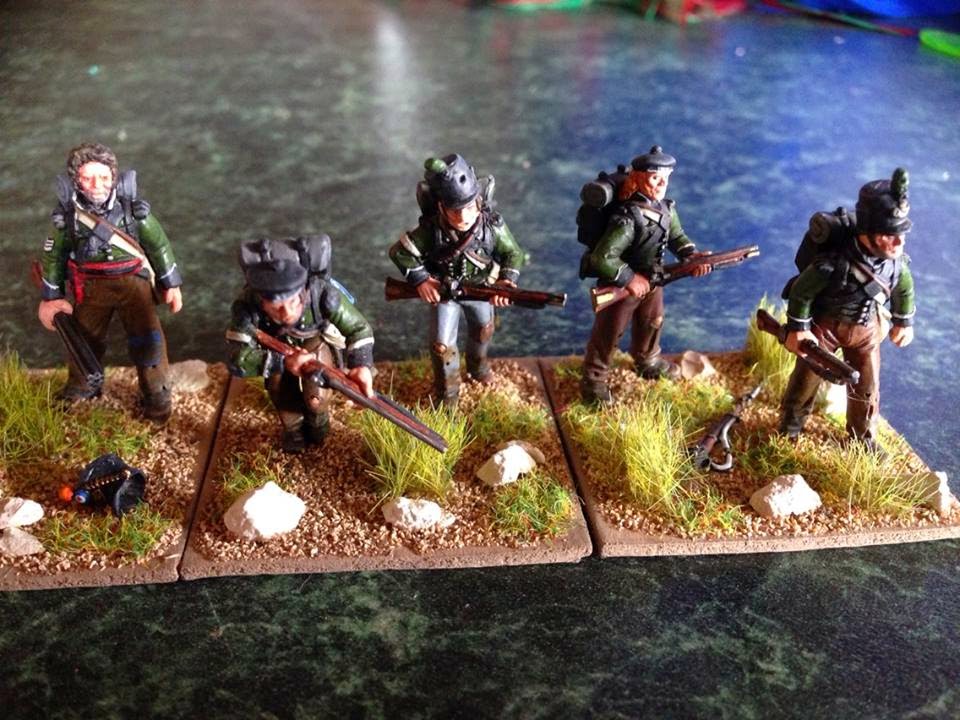 ABOVE AND BELOW: Converted PERRY MINIATURES rifles to represent Richard Sharpe's men. 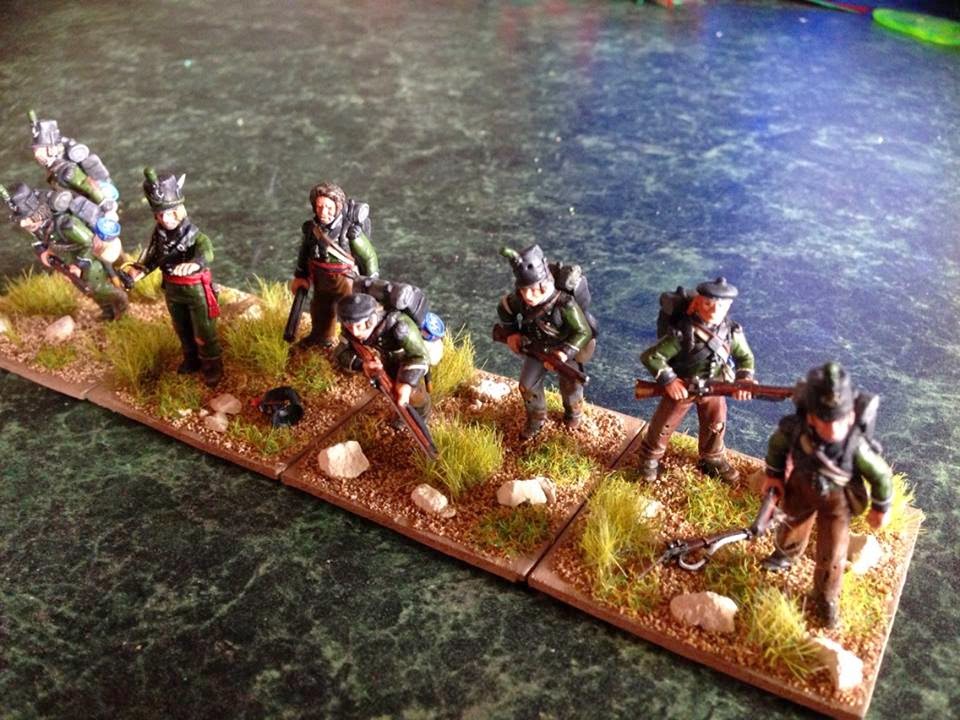 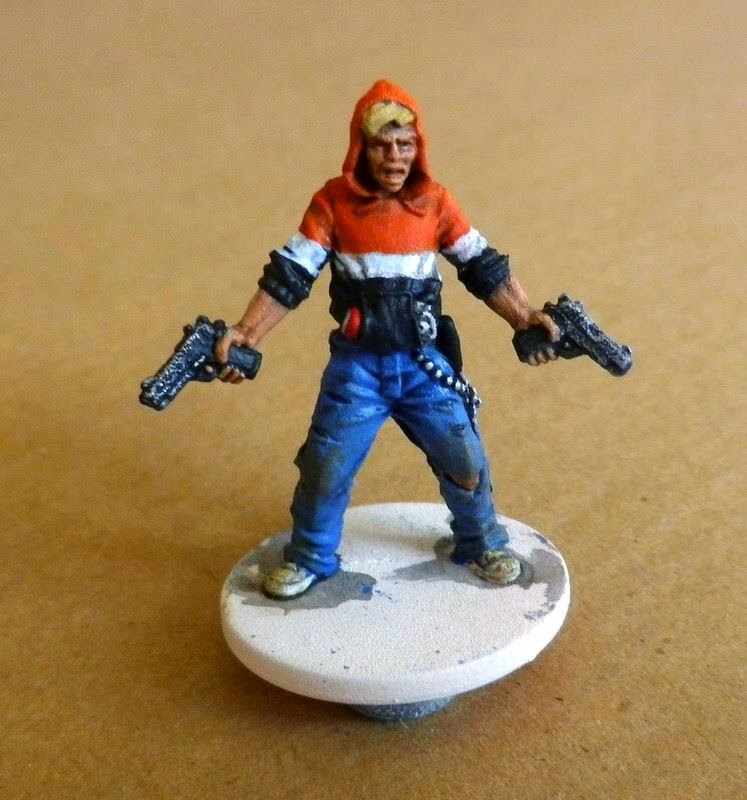 I can't recommend Gunner Dunbar more highly.
I rate his standard as 'SHOWCASE'.
There is a LABLE below (Dan Dunbar) where you can see more examples of his work!
5 out of 5!

Next I'd like to make mention of a new TERRAIN supplier.
Let's face it, most of us neglect that aspect of wargaming.
For the most part we insist on having at least half decent miniatures on our tables but then we drop the ball an use shoddy terrain.
Either we cant afford the good stuff, or we lack the time and or effort / skill required to make affordable stuff.
Good news.
Now you can purchase ready made, 'Good to Go' wargames quality terrain from STANLEY'S TERRAIN
No need to assemble or paint it. Just take it out of the box it comes in and place it on the table.
No, its not a 'Museum Quality' stuff,.. but its serviceable and value for money.
Here's some samples: 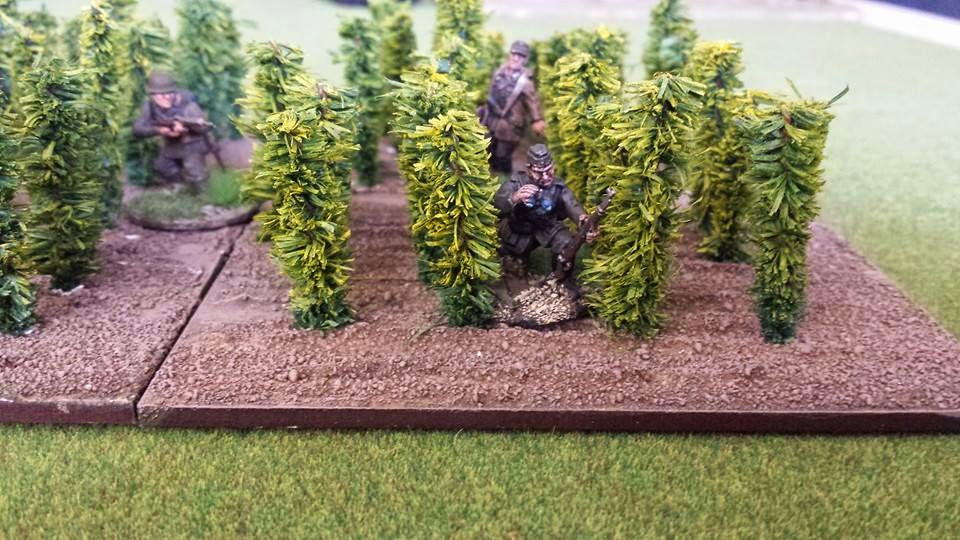 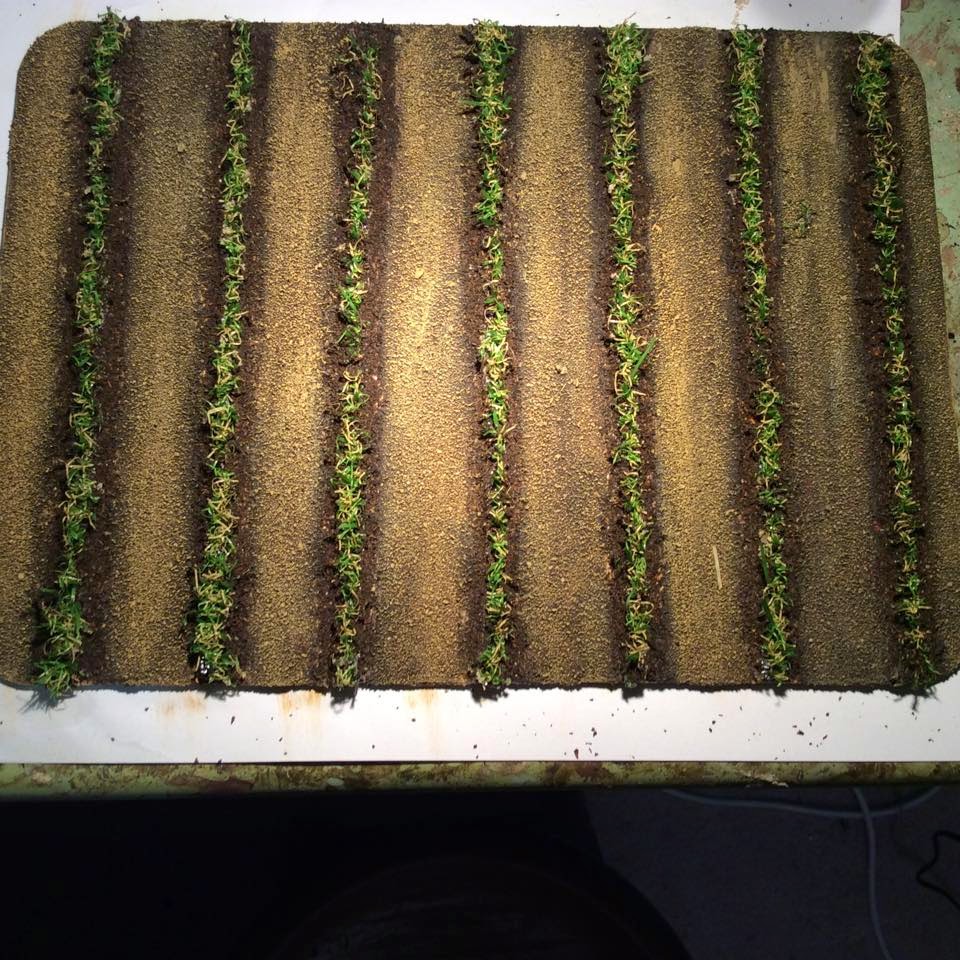 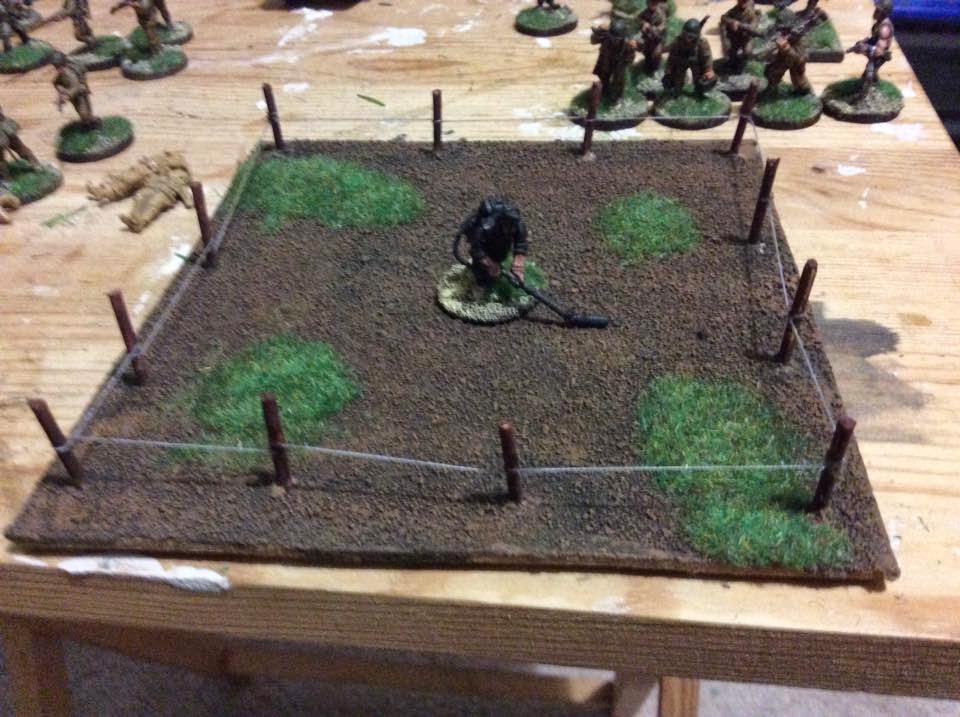 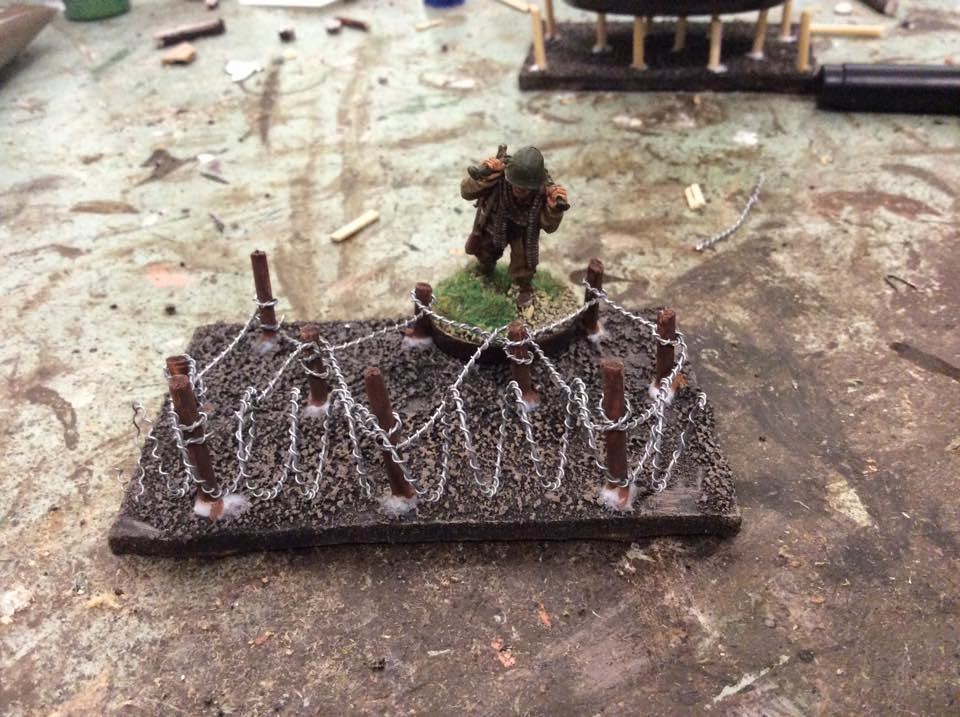 I myself have purchased a Minefield and a walled field / enclosure and I'm very happy.
Highly recommended.

Hi Team
Well, as you may have noticed its been about 6 MONTHS since my last Blog Entry.
STREWTH!!!
Sorry about that.
I was recently discharged from the army after 32 and a bit years of service and the adjustment has been a challenge.
Furthermore my treatment for Post Traumatic Stress Disorder (PTSD, the reason for my discharge) has also been something that has required a bit of 'adapting' to.
Anyway, I'm back now and have a fair bit of stuff of a wargames nature to share, which I will do very shortly.
A huge thanks to my wife who has got me through this,.... 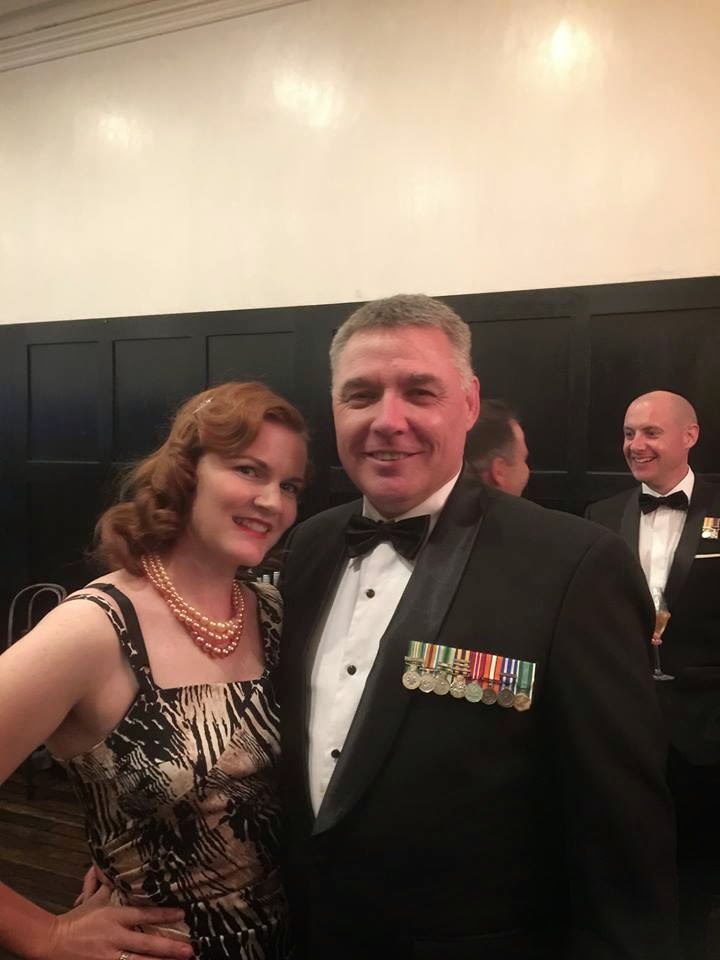 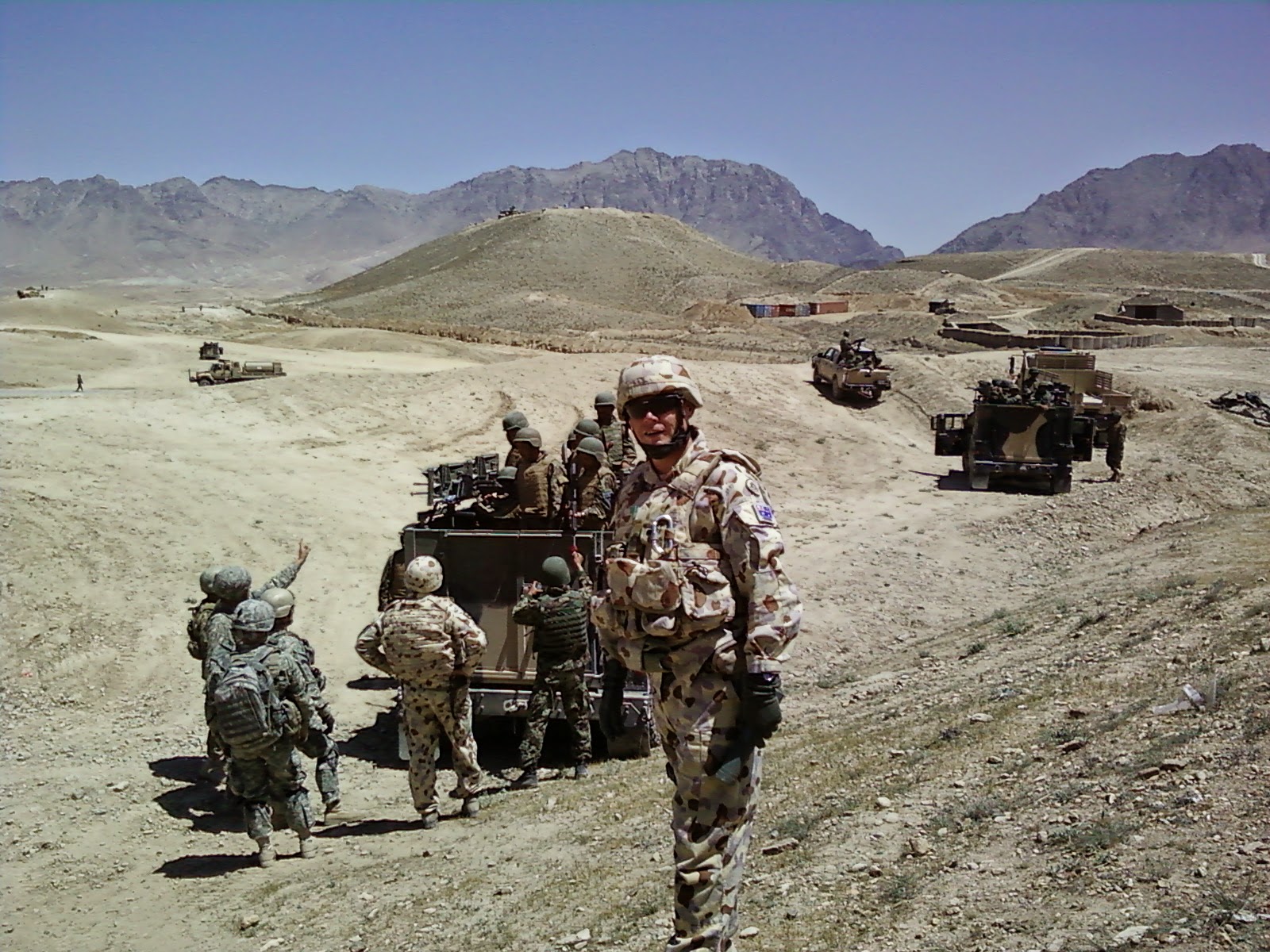