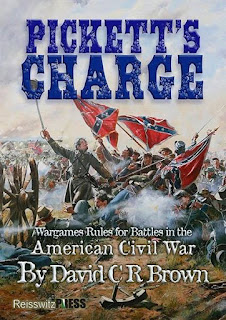 Recently the team at Too Fat Lardies teamed up with David C R Brown of 'Guns at Gettysburg' and 'General de Brigade' fame to produce 'PICKETT'S CHARGE'!
Well I had a quick hit out with the new 'PICKETT'S CHARGE' (PC) Rules and I'll say right off the bat I'm impressed!
These are great rules that give a great feel for commanding a Division or Corps during the ACW.
LIKES

Command and Control:
A proper command and control system that places you in the situation of a Divisional Commander, having to prioritize where your main effort will be. Brigades are deployed with Regiments allocated places withing the brigade area and they (the Regiments) must remain there, unless a staff officer is sent to rearrange where Brigade within the Division can be redeployed. For example,...
The 1st Division will deploy its 4 Brigades as follows: the 1st on the right, 2nd on the left, the 3rd the center and the 4 behind the 3rd".
Now those Brigades must remain in that formation relevant to each other unless a staff officer is posted to rearrange the deployment.
In other words when the Division moves the individual Brigades maintain their positions (flanks, center, reserve) within the Divisional Deployment Area.
Artillery:
If you blaze away all day with your guns it wont be long before your gunners are fatigued and ammo is low. You are forced to prioritize your targets and make sure you have your guns ready to support the main effort, be that shooting in support of an infantry assault or "driving off the enemies guns on that thar younder ridge-line,.".


Sequence of play: both players are engaged throughout the game. no one is left sitting around.
Mechanisms:
Resolving firing and Close Combat is very simple. What else can I say. Essentially a Battalion will fire with two dice. If the Battalion is LARGE it receives extra Casualty Dice (CD) which give you a increased probability of doing some damage. Small Battalions fire with two dice also but on what is another table giving less brutal results.
Artillery Fire is particularly well modeled with an option to engage in ARTILLERY ASSAULTS reminiscent of Lee's effort of blowing a hole in the union lines prior to the Charge these rules are named for. And just like that event you will run a risk of 'Burning out' your gunners and their ammo if you are too cavalier with your artillery fire.
Another thing I loved was how Fire Disciple can fall apart and once that happens it important you get your Battalion / Regiment back under control as their fire will become less effective.
Fog Of War (FOW):
There is a very simple FOW mechanism built into the game. Brigades that are hidden simply have a Card placed on the table behind the hill or in the woods that they are deployed behind / within. When enemy come within sighting range they are revealed and troops deployed. OR
A staff Officer can be sent forward to scout the position and reveal to the Divisional commander what awaits his men,...
FRICTION:
It is well inserted into the game. You can never be sure your orders will be obeyed. You can send staff officers from your HQ to pressure Brigade commanders to do as directed but you're never a certainty,...

PACE:
The game moves along at a brisk pace and play very quickly. 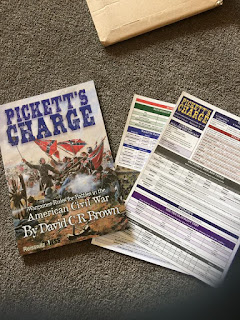 I can honestly say I can't find anything to dislike about these rules.

We played the Attack on the Sunken Lane scenario straight out of the rules, based on the Federal assault on the Sunken )Bloody) Lane at Antietam in September of 1862.
I played as the assaulting Union Division under French. 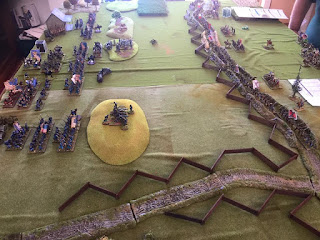 I decided to simply go 'up the guts' simply to see what kind of result the rules would produce.
Not surprisingly the Union troops took an utter pounding.
Of my 5 Brigades only 2 (the Irish

🍀 Bde and a Brigade of New Yorkers) managed to even reach the sunken lane.
Even then none managed to cross bayonets with the Rebs. The best result we achieved was to get a Regiment of New York Zouaves to crest the lane's near edge and pour in a single volley before being force to retire. 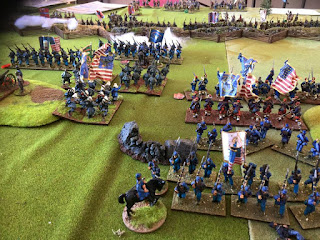 Tip for young players: it's not wise to deploy brigades one in front of another.
Deploy them side by side. Otherwise (as the Rebs at Shilo found out) you'll soon have a jumble of regiments from different brigades getting under each other's feet. And that sucks

These rules are extremely bloody and if you don't coordinate your attacks and successfully soften up an enemy which has terrain in his favour you'll be fortunate to have any success in the assault.
The command and control system, with its use of 'Staff Officers' to provide influence on your brigade commanders is a very simply yet elegant way of simulation command 'friction'. 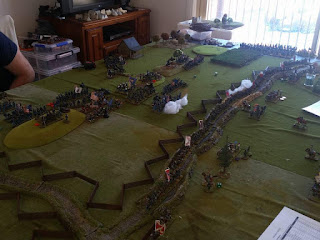 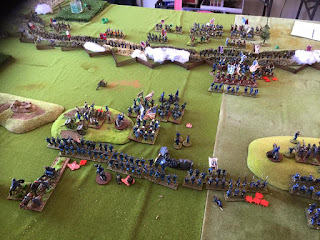 The game moves along at a brisk pace and you never feel like a spectator.
Though your individual Regiments / Battalions are the maneuver elements it is the Brigade that is the formation of decision. 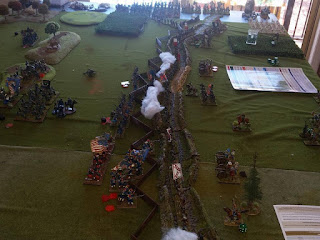 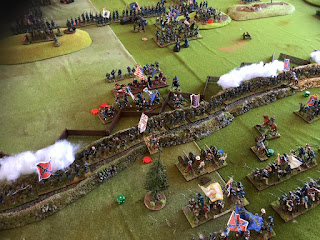 So how does PC compare with other rules?
I've never played 'Guns at Gettysburg' so I can't comment on that but I have played the well played and respected 'FIRE & FURY' (F&F) rules.
I would say (IMHO) that I prefer PC over F&F in so far as even though the focus is on the 'Brigade' the Regiment is still the fighting unit you're focused on with other regiments within the brigade providing support to the 'Lead Regiment'. In other words you Brigade needs to fight AS a brigade with attention paid to how the individual Regiments are deployed and if they are mutually supporting. A lone Regiment will soon find itself in deep KAKA.
Melee results are similar to those you find in F&F with the usual result being a repulsed attacker (in various stages of disorder) or the defender 'giving way' prior to any bayonets or clubbed muskets being used.
Even when melees do happen they are brief and bloody.
PC fits neatly into that place between F&F and Regimental
You can hear an Interview with the rules author with the chaps at MEEPLES AND MINIATURES HERE