A Tale of Two Farms

A Tale of Two (or is it three) farms

If there is one area of tabletop war gaming that is usually and painfully underdone it the area of nice, quality terrain.
How often have we seen nicely painted miniatures manoeuvring across a table top covered in terrain that quite frankly is an eyesore?
For most of us building nice terrain is a real challenge.
It's one thing to paint a beautifully sculpted miniature but it's another to creat a realistic model of contemporary buildings.
As a child I loved the old Airfix buildings. Remember the Roman Fort and US Cavalry fort? The D-Day gun emplacement sets, the Jungle HQ, the Arabian / French Foreign Legion Fort and of course the Pontoon Bridge set were 'must have' items.
Alas they are not available in either 15mm or 28mm.
So it was a case of either scratch building or buying 'ready made' resin models.
And then came the MDF kits!
There has been a lot of buzz about these kits, particularly the very nice 4Ground kits.
They are however rather pricey.
Today I'm going to explore two or three recent kits that have become available. Kits that allow we budding architects to build that most desired of buildings, La Haye Sainte of Waterloo fame!
You've all probably heard of Warlord Games La Haye Sainte (LHS) box sets. There are two. The 'Battle Set'
http://us-store.warlordgames.com/collections/napoleonic-wars-1789-1816/products/la-haye-sainte-battle-set 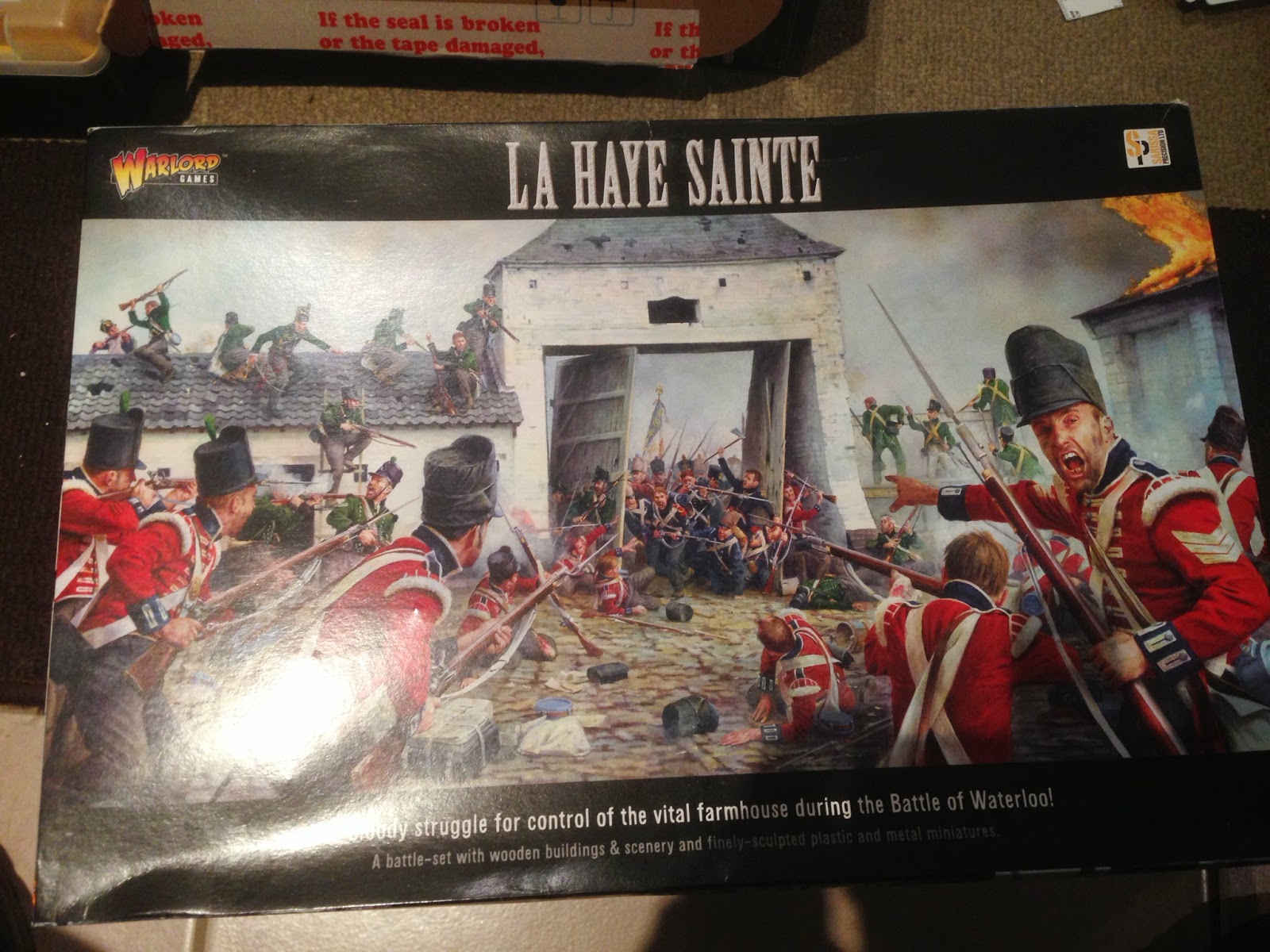 and the 'Collectors Set'
http://us-store.warlordgames.com/collections/napoleonic-wars-1789-1816/products/farmhouse-assault-la-haye-sainte-collectors-edition

There is a third manufacturer.
4Ground has made a version of LHS, but unfortunately I want be reviewing that kit, just the Warlord Games and BA versions.
Given the 4Ground version is selling for a not inconsiderable £275 (about $500 something) I can just continue to dream.
No, I'll be looking at the 'less expensive' versions.
I'll do the review over a couple of posts.
First I'll share my thoughts on the pros and cons of the two sets I'm reviewing, (the WLG 'Battle Set' and the BA LHS set).
Once discussing the content and first impressions are dealt with ill discussing building the kits, which was easier to do, and which is more detailed and practical for gaming with.

Ok. First impressions?
The WLG battle set come in a rather nice box with artwork depicting the famous farm house on that fateful June day in 1815.
Opening up the box we find all the contents listed
La Haye Sainte contains:

The first thing I noticed was the very professional packaging.
There is a interesting 'Scenario' booklet aimed at the gamer using the Black Powder rules.
As you can see you receive 62 miniatures, about half are plastics. Let's say you get $160 of miniatures to go with the farmhouse. So for $385 AUD you can say that that the farmhouse costs you $225 give or take.
This observation is important to consider.

By contrast you will notice the BA version of LHS comes in a plain white box. Within you you will find the lazier cut 'bits and pieces' necessary to construct the farmhouse of LHS.
There are also photo copy standard pictures of all the various buildings and walls that are required to be assembled to build the farmhouse complex.
There are no miniatures to speak of. There are also assembly instructions / construction guide as such, just the photocopy pictures.
However I've found the photocopy pictures are all I really needed. That said Mike has posted a very very handy uTube video that shows you how to construct a building and Mike promises that more instructional videos will follow shortly.
You can see the first video here:
http://youtu.be/Wk3q0k8q1UY

What's really cool about the video guide is not only are you shown how to construct one of the buildings from the BA LHS set but Mike provides heaps of nifty little tips.
Even if you don't buy his LHS set or any of the other BA offerings it's worth watching if you intend to build any lazercut MDF buildings 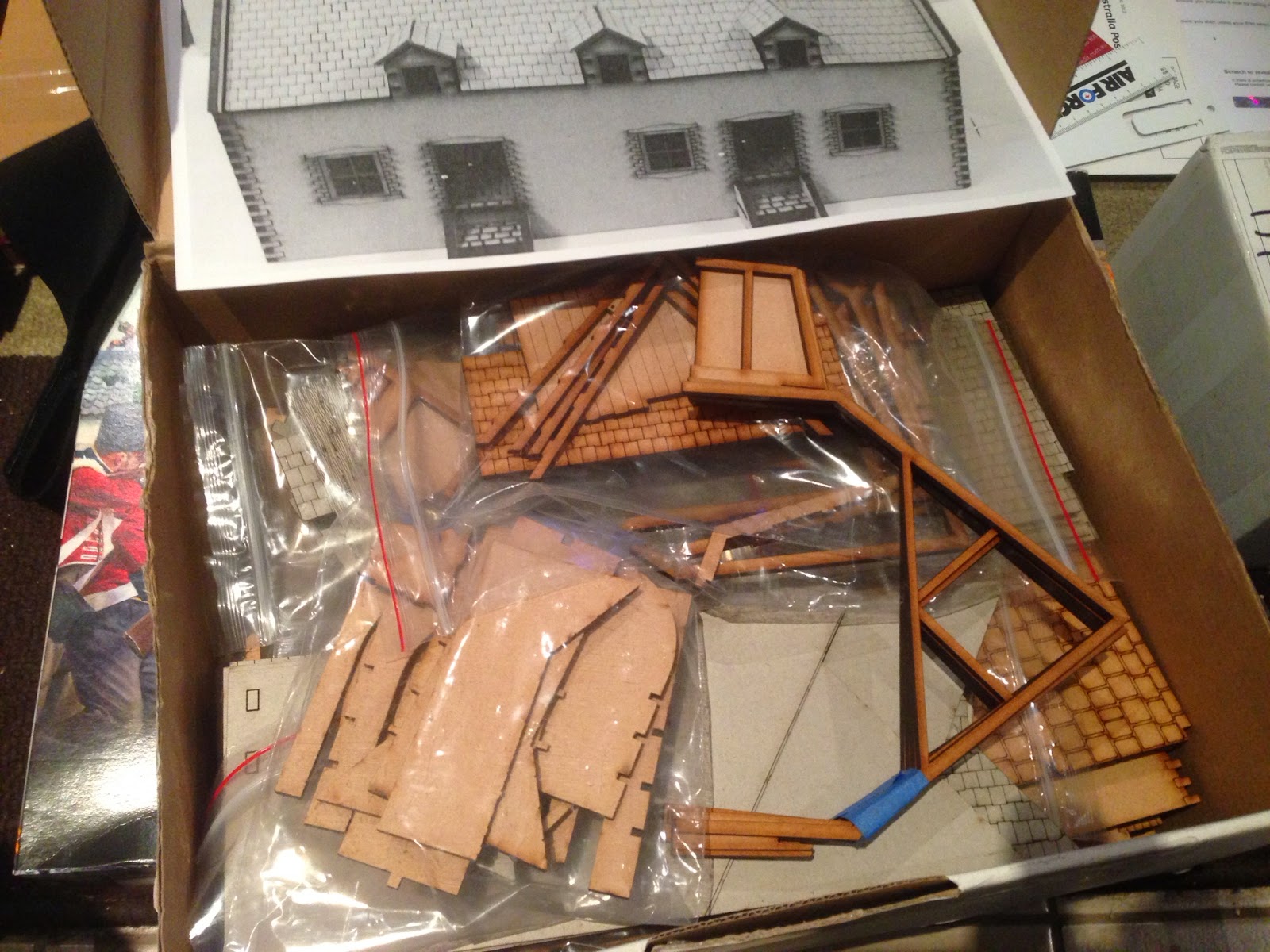 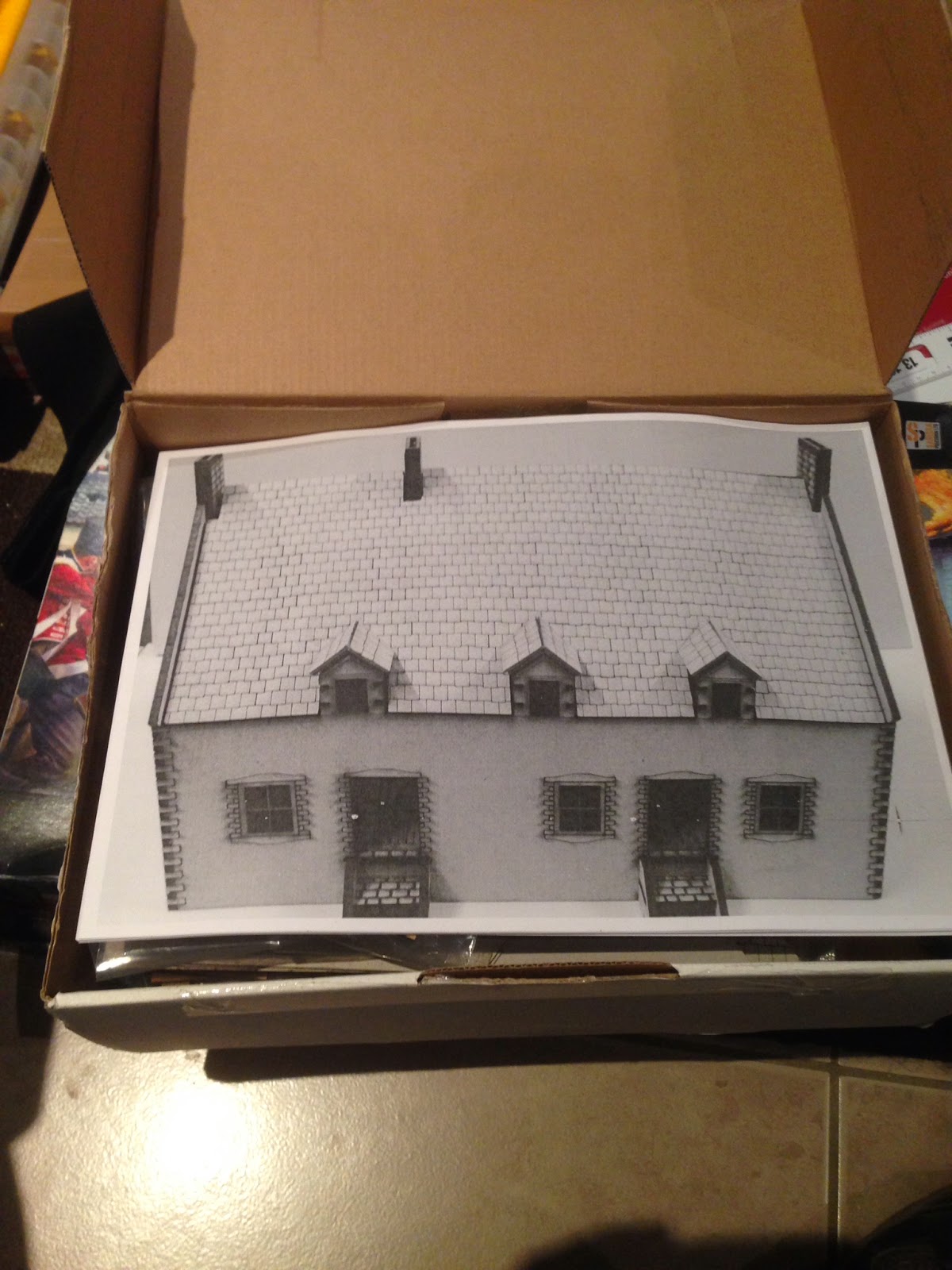 Let's now talk value for money.
I've seen both models constructed.
To be honest there is really nothing in real 'model quality' to split them. Both are nice models. Both appear relatively easy to construct.
Both are made from quality materials.
Looking at the building instructions shows that the BA version is a more detailed model in regards to building interiors, with interior walls, lofts and staircases in some buildings.
The WLGs model has several carts and pieces of furniture which are nice.
Both models are very suitable to skirmish style games.
But what leaves me feeling that the BA model is better value for my money is the bottom line price.
The BA version retails for $175 AUD plus a flat $15 postage domestic or $25 international.
The WLG version costs $385 AUD plus postage. I've no idea on what postage to us here in Australia will be. I'd buy it directly from WAR AND PEACE GAMES here in Australia and save on postage. Besides, WAR AND PEACE are great to deal with.

Yes,.. WLG gives you 62 miniatures and YES you get a plough, two nifty carts and some furniture but I personally don't need 41 extra French infantry and 21 KGL riflemen.
Even if I did I'd rather purchase my miniatures from Perry to match the rest of my Napoleonic collection. I'm not saying the Warlord games miniatures are not nice, but what if my collection is Perry, or Victrix, or Front Rank?

And what if I want the farmhouse for playing WW2 games exclusively because Napoleonic's just ain't my thing.
Well, you get the idea.
The other issue for me is also the fact that the BA version is Aussie made!
That's right! Home grown Aussie made terrain!
For me supporting the domestic manufacturers such as Eureka Miniatures, Adventure Miniatures and Battlefield Accessories is important.

All that said, IF I was recently getting into Napoleonic gaming AND I was a fan of Warlord Games miniatures (and they are fine miniatures just not to my taste) then the WLGs battle set is a good starting point. Even more so if your rules of choice are BLACK POWDER.
Also consider looking at the WLGs COLLECTOR Edition of LHS.
In that set you get even more miniatures and some nice additional terrain pieces including the famous 'Sand pit' that riflemen from the 95th fought.
Plus:
Resin pile of dead Frenchmen (used by the King’s German Legion to block the gateway after they burnt the gates for warmth the night before!)
6 French Voltigeurs skirmishing
Marshall Ney (Bravest of the Brave)
4 French casualties
Mounted French Officer
36 plastic French Line Infantry (6 metal command and 30 plastic infantry)
6 Luneberg Light Infantry
6 British 95th Rifles
1 British Rocketeer and a horse.
1 Nassau officer using cooking pot to extinguish the barn fire (exclusive metal model)
6  Nassau infantry
36 plastic Hanoverian Infantry (6 metal command, 30 plastic infantry)
Farmer’s wife tending young calf (exclusive metal model – she refused to leave the poor newborn and stayed with it during the battle…)
Abatis branches
Cost? $478 USD. I suspect it would sell here in Australia for around the vicinity of $525-550 AUD, but I must stress I'm just speculating on the Aussie $ cost.

Now, as we progress with the review I will look closer at the miniatures that come in the Warlord Games sets but for now let's just focus on the Farm Buildings because let's face it, this isn't a figure review.
So that's all for now.
In my next post we'll look at both construction and a side by side comparison of the two sets.
Posted by Trailape at 5:16 AM 1 comment: