Hi All
Well, its been a long time since I've posted on this blog, (and more on the reason why later) but here is a long overdue addition to my reports.
I've been staying in Canberra for the last few weeks, so I took the opportunity to catch up with an old gaming mate David and get in a game of MAURICE.
David provided all the miniatures and terrain and gaming aids.
My army was a Hessian force with some Pfalz allies. David's army was Russian. 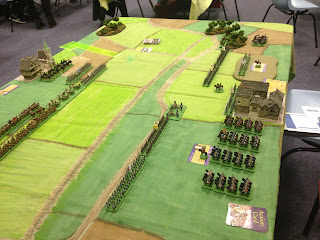 I deployed with three battalions of Musketeers on the right of the enemies objective, the town of Hayleystadt with two forward and one in reserve on the high ground.  My irregulars were deployed in and around the wooded area on our far right flank. I garrisoned the town with a battalion of musketeers and deployed my two guns in front of and slightly to the left of the town. My left flank consisted of the Elite Grenadiers and a a Pfalz Musketeer Battalion.
Finally I massed all my Cavalry in reserve in March Column behind the left flank battalions. My notables consisted of the Rev.Whitehorse and Hans Von Gudarian (I might have changed their names)  ;)
Gudarian was my choice to command my mounted reserve, adding a +1 to all rally rolls for the Regiment he was attached to.
The Rev Whitehorse was commanding the right flank infantry.
David decided to stack his right flank. I looked like he intended to try and clobber my left flank infantry and then roll up my Cavalry reserve in a combined arms attack. He massed his artillery in the center, I assumed to provide support to either flank, in either defence or attack. 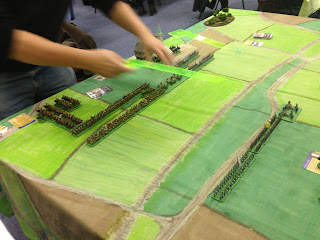 ABOVE: David's first move. He advanced his massed artillery and in a coordinated move worthy of a Prussian Drill manual swings his cavalry regiments out towards his right flank. 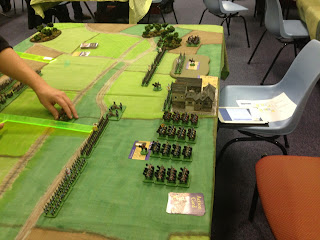 Before I could exclaim "Mien Gott"! david was able to sweep all his horse around to threaten my left.
Fortunately I was able to wheel my Pfalz Musketeers back and refuse my left flank and change the facing of my own Cuirassiers to face the threat.
I was able to hold off the Russian attempt to roll up my left flank. Quickly David now advanced his Elite Grenadiers and Musketeer to support his cavalry. 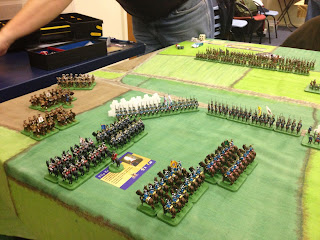 ABOVE: The threat to my left flank.
BELOW: I advance my right in an attempt to distract David, to no avail. 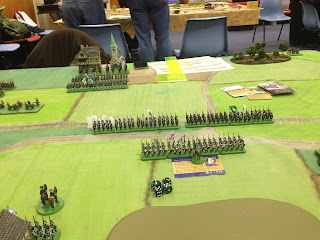 As David threw his men at my left I attempted to distract him by repaying him the favour by advancing the three battalions on my right. All my attacked achieved doing was destroying one of his Artillery with a combination of brisk musketry and artillery fire. (see above and below) 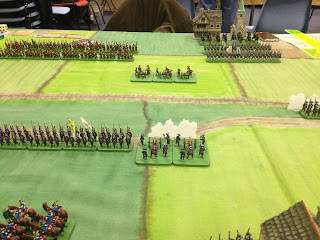 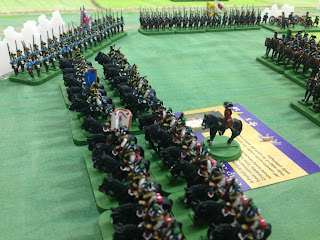 ABOVE: My Hessian ELITE cavalry, Cuirassiers, and BELOW: the Russian equivalents. 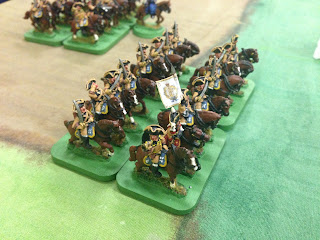 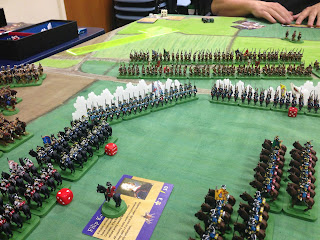 The action now centered on my left flank, with fire-fights and the occasional charges into hand to hand combat between our flank forces infantry and cavalry. My Pfalz Musketeers performed feats of valour, consistently rallying of disruption and delivering devastating volley fire resulting in the dispatching of one battalion of Russian Grenadiers, and then a supporting battalion of Musketeers after some torrid hand to hand combat. (see below) 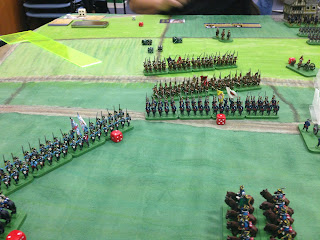 Not to be outdone, two of my cuirassiers then routed one of their opposite numbers after an initial setback. Adding insult to injury the Russian artillery was whipped out gun by gun by the less numerous Hessian gunners.
BELOW: The fog of war; Pfalz Musketeers blaze away at Russian Dragoons and Hessian Cuirassiers destroy one of the Russian Cuirassier Regiments leaving only one left to continue the uneven fight 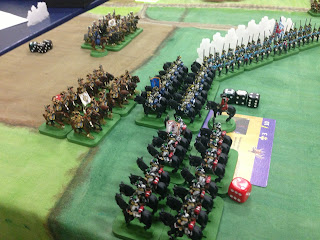 With the Regiment of Russian Dragoons being routed by musket fire (see above) the Russian army fell apart and routed from the field. 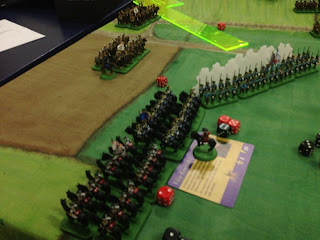 David played an excellent game, but just couldn't turn hits into disruption. Furthermore my lads consistently rallied of what disruption they did take showing incredible discipline.
David's gunners were a huge disappointment, with my gunners performing beyond expectations.
A great game, lots of fun and done in two hours including set up.
David's comments:

"I simply did't expect you to refuse your flank by falling the Pflaz battalion back. But I was disappointed (embarrassed actually!) with my artillery.Still a very enjoyable game played at a good pace".

David's miniatures are the beautiful EUREKA Miniatures 18mm infantry and Artillery and the Cavalry are Old Glory or Essex miniatures I think.
As usual, comments are welcomed.
Cheers
Posted by Trailape at 10:03 PM 9 comments: