Hi Guys
I was fortunate enough to be given a small building created by Mike Parker of BATTLEFIELD ACCESSORIES whilst visiting EUREKA MINIATURES a few days ago.
Mike produces some fantastic resin terrain but is now considering entering the world of 'Laser Cut' terrain.
Very early days but here is his initial offerings.
Two building, one in 15mm - 18mm scale and another in 25mm scale.
As you can see the kit comes flat packed. This is the 15mm version. 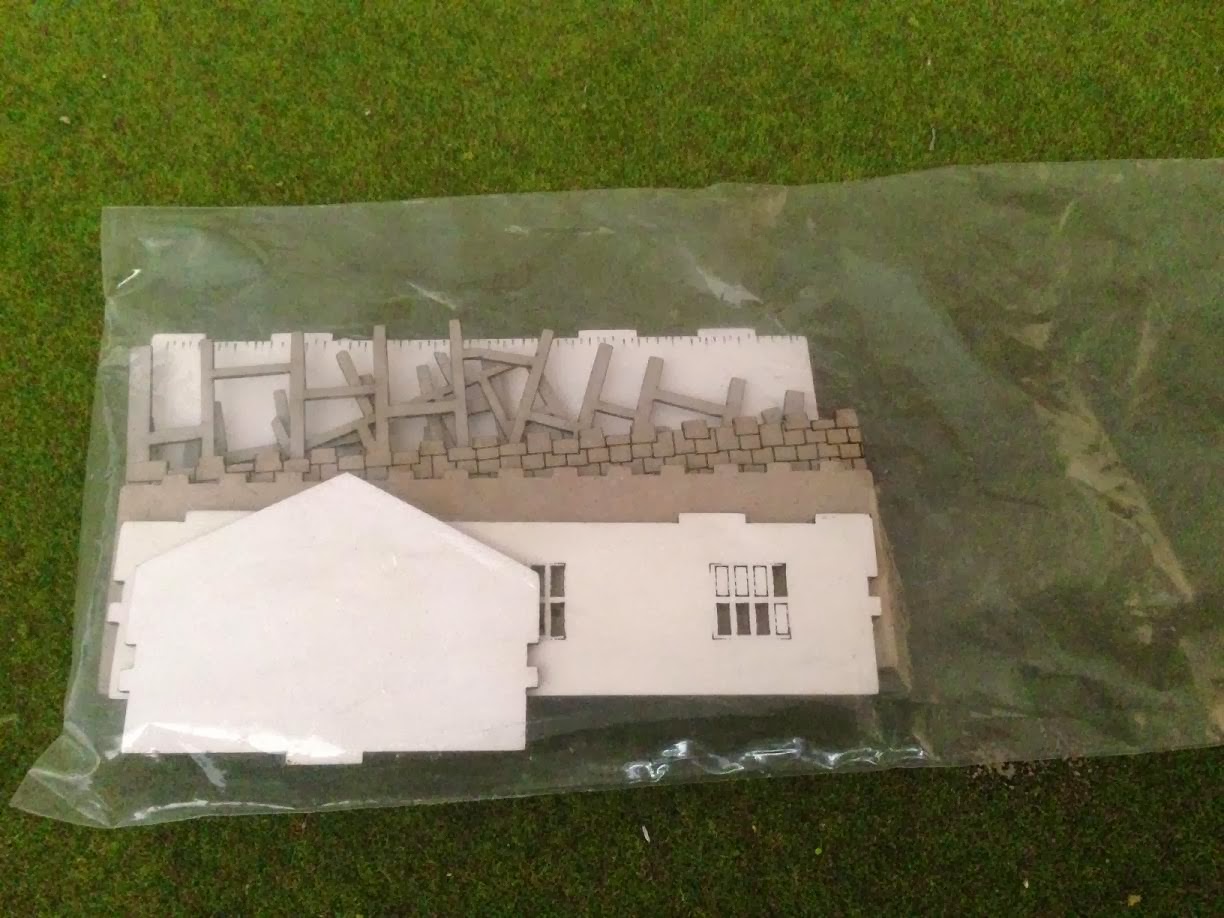 Once opened it's always a good idea to lay all the parts out and then conduct a 'Dry Run' at assembly. 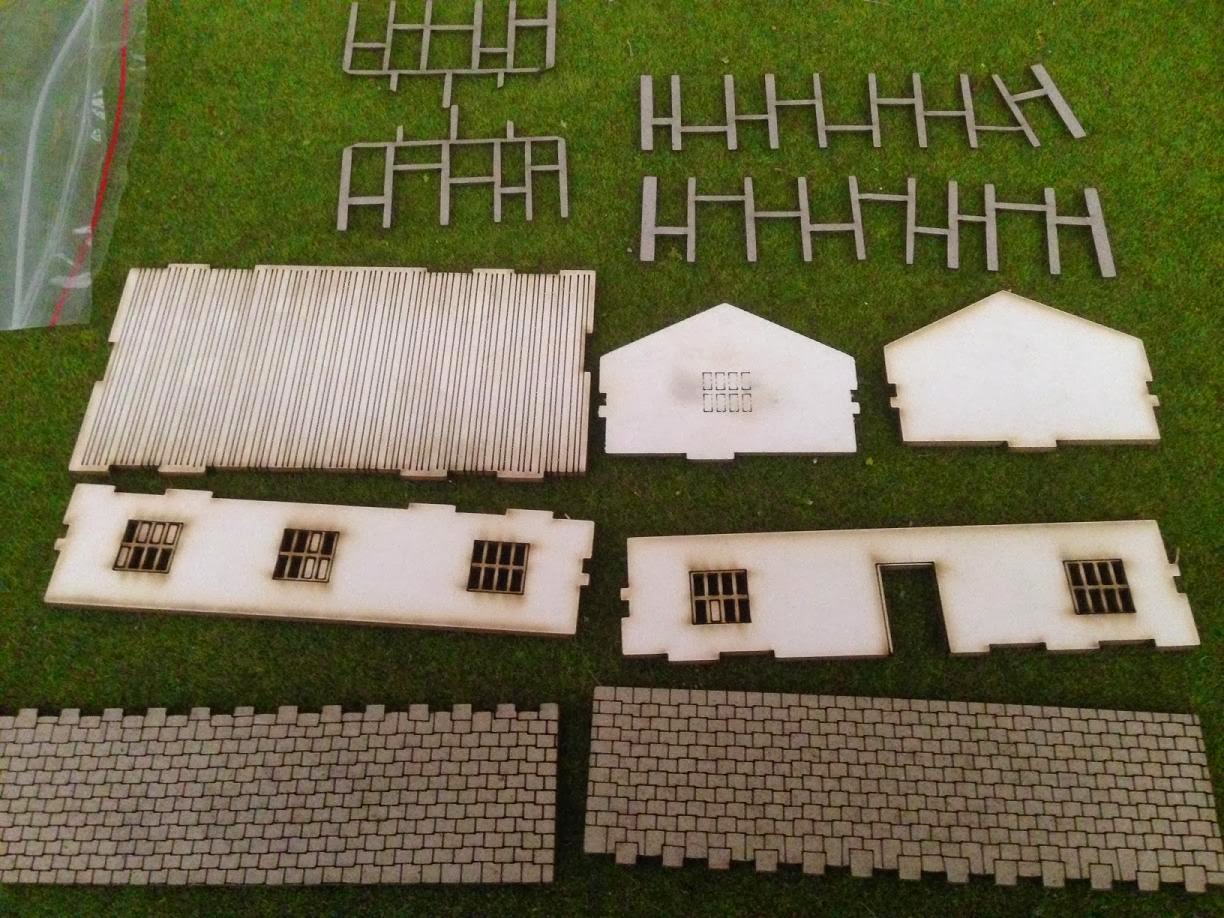 Now here are some vids I took with 'step by step' assembly.
I'll admit they aren't of the highest quality. I used my iPhone and only have two hands,....


And here is a photo of the finished product with framing attached. 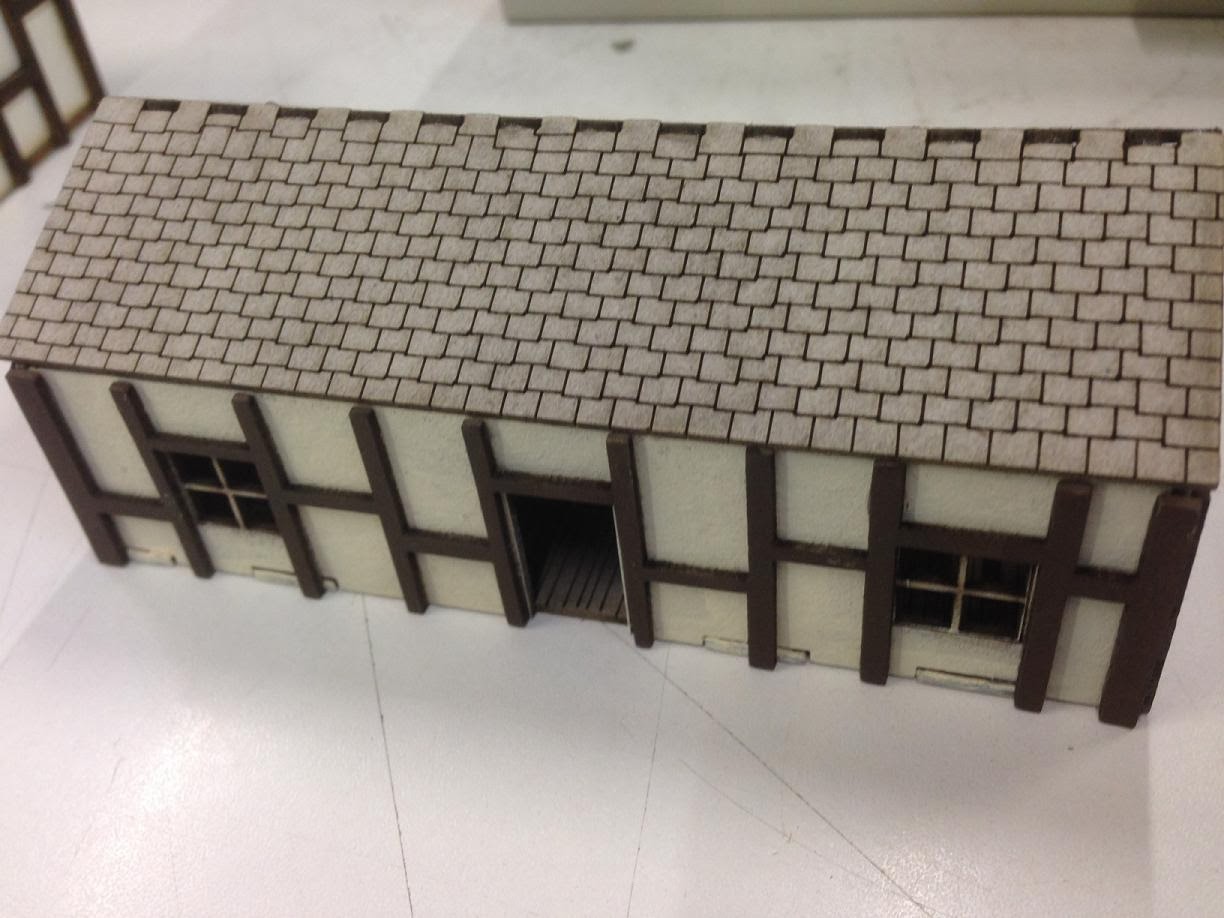 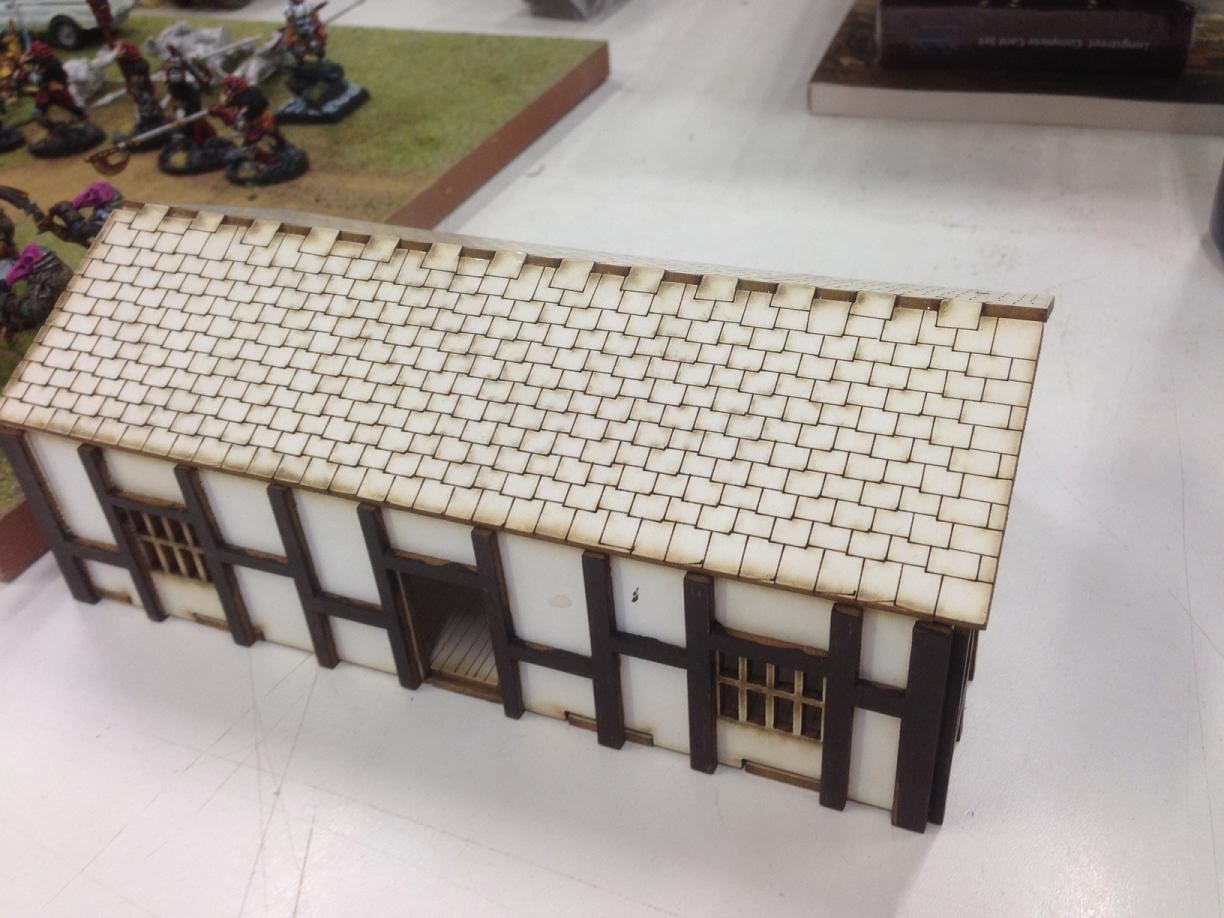 These are by my understanding just prototypes but the finished product should be pretty close to this mark.
I for one will be very keen to see these buildings hit the shelves and be available for purchase. As with all products from Battlefield Accessories these promise to be excellent value and a great addition to your terrain collection.
The prices I mentioned in the video IIRC are what was mentioned for the 28mm scale building.
I'll try and get a better idea of costs ffrom Mike or Nic.
Cheers
Posted by Trailape at 7:15 PM 2 comments:

Hi Guys
I recently acquired some underlay material. We were moving house (again) and the removalists left some underlay with us wrapped around some furniture.
I remember reading somewhere that underlay was a useful material for use as a terrain covering though the consensus was it was best used buy draping over books of foam bloxks to create hils and then covering it with a terrain 'coloured' cloth.
I wondered if it was possible to simply colour the underlay itself.
What follows is a series of photos of my attempt at colouring underlay and using it as a terrain matt.
Here is what the underlay looks like without any alteration at all in contrast to a Warhammer Game Matt: 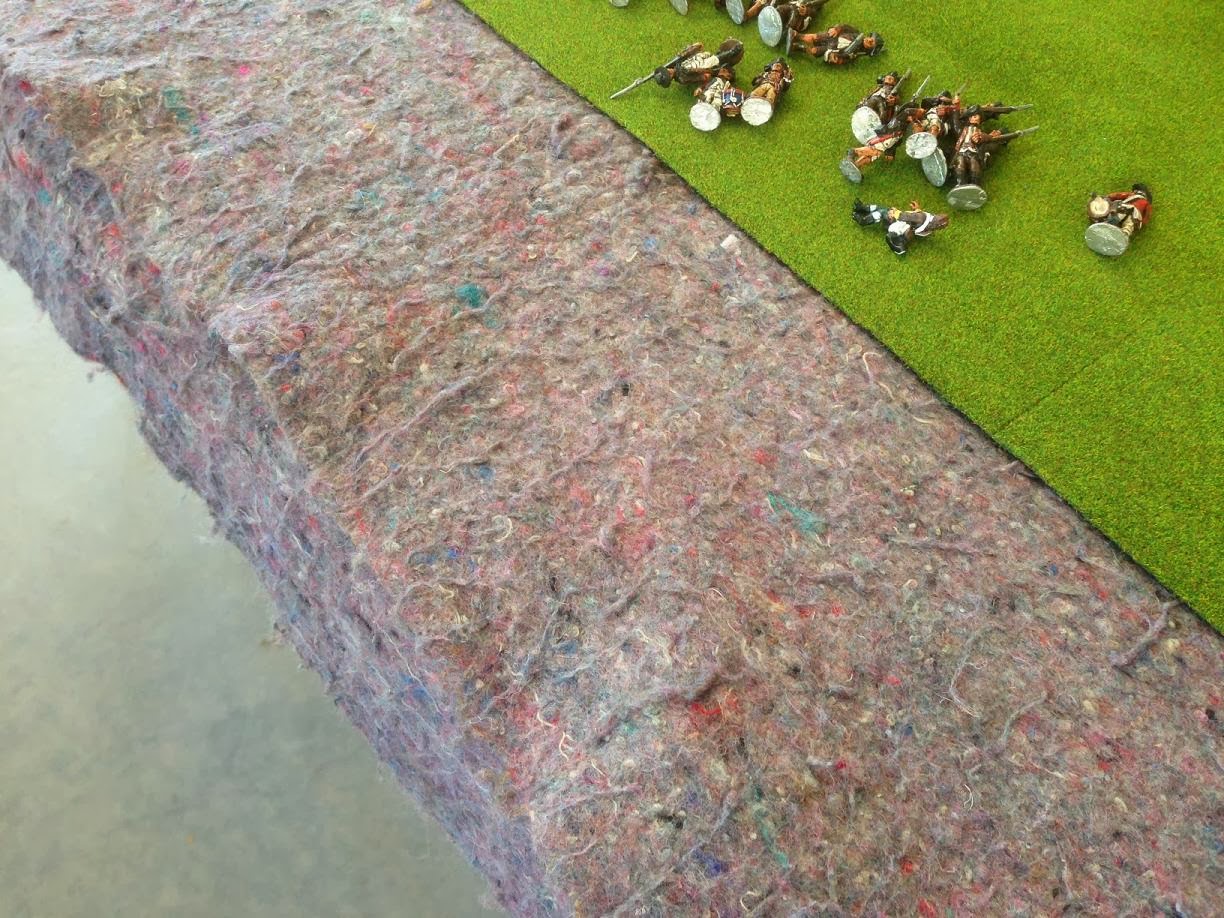 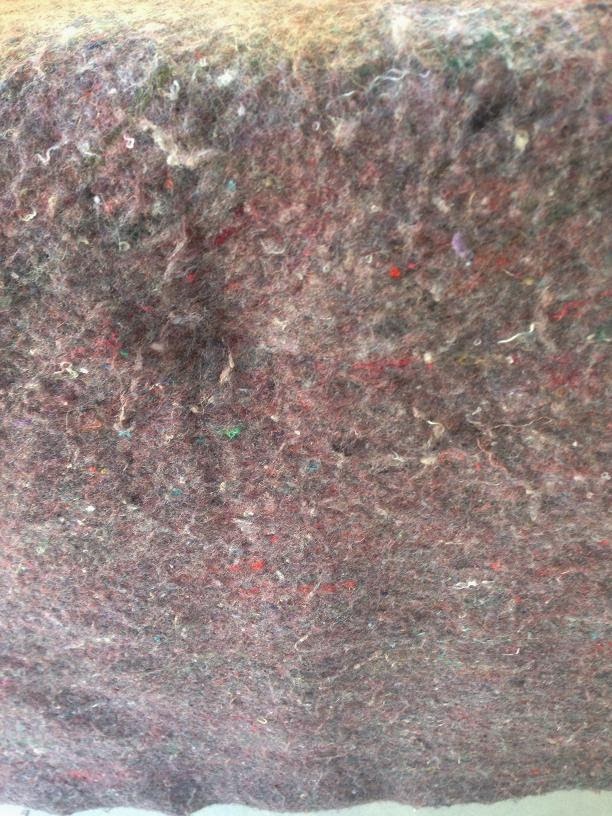 Next: I sprayed the underlay with several cans of paint. Starting with earthy and dark browns the dark green and light green. 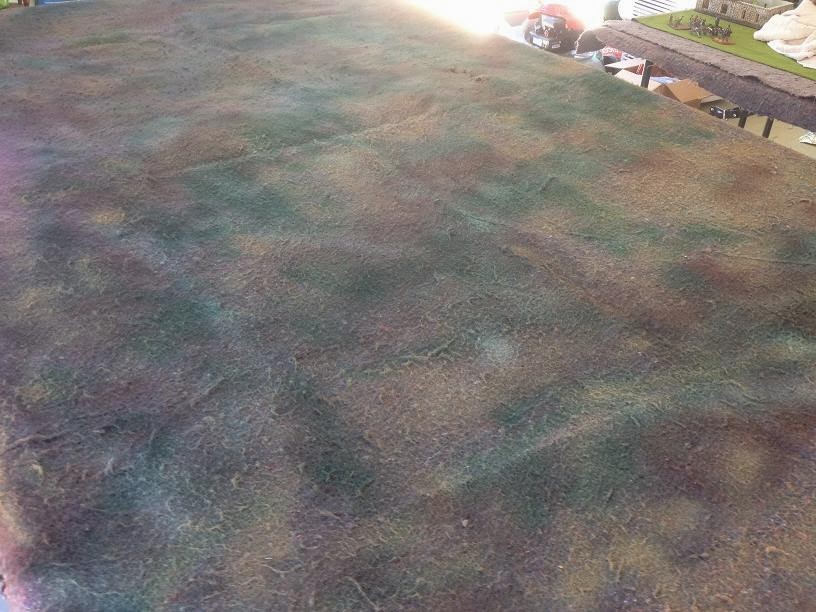 You can see here that the underlay has a natural 'Grassy' look about it. 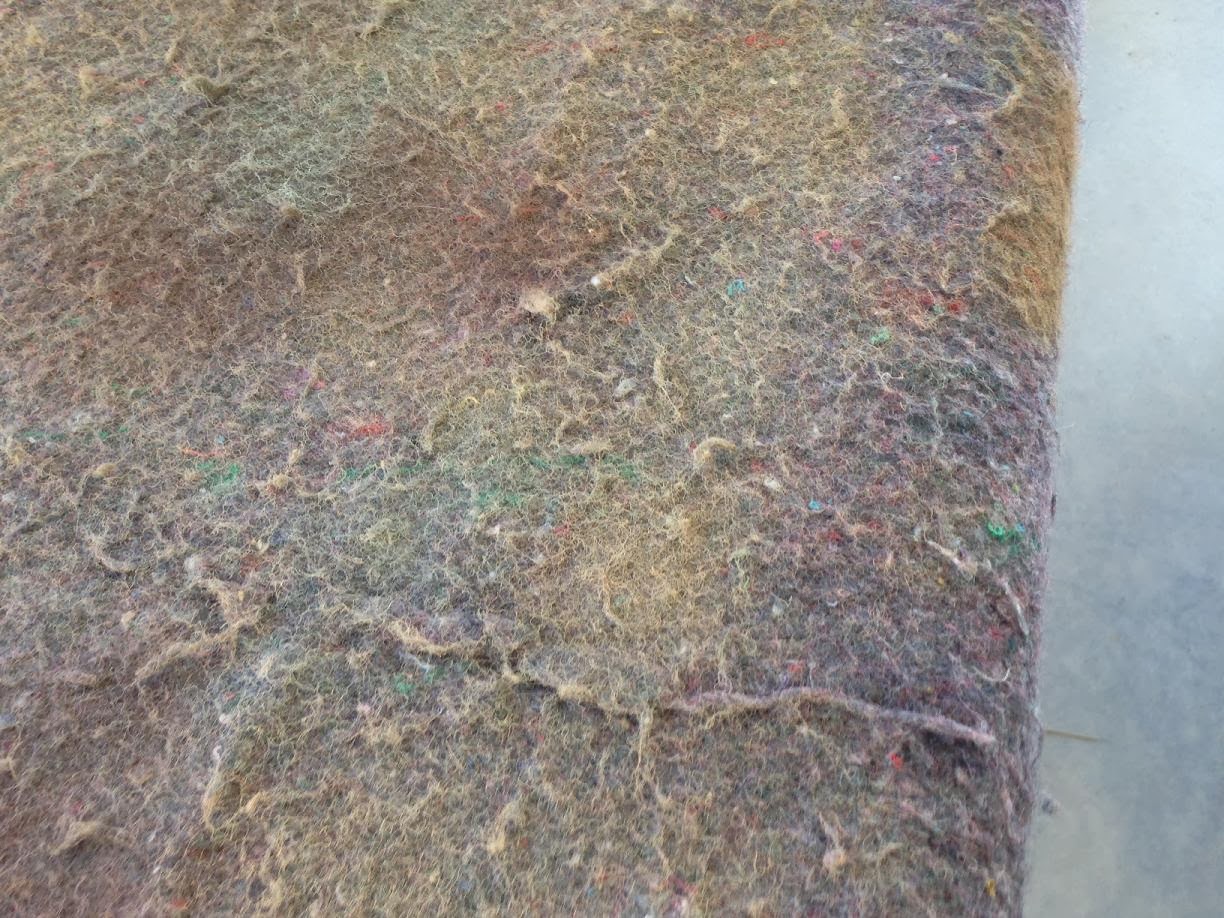 Finally I gave it an 'All Over' light spray of Army Painter Desert Yellow colour as a bit of a highlight. 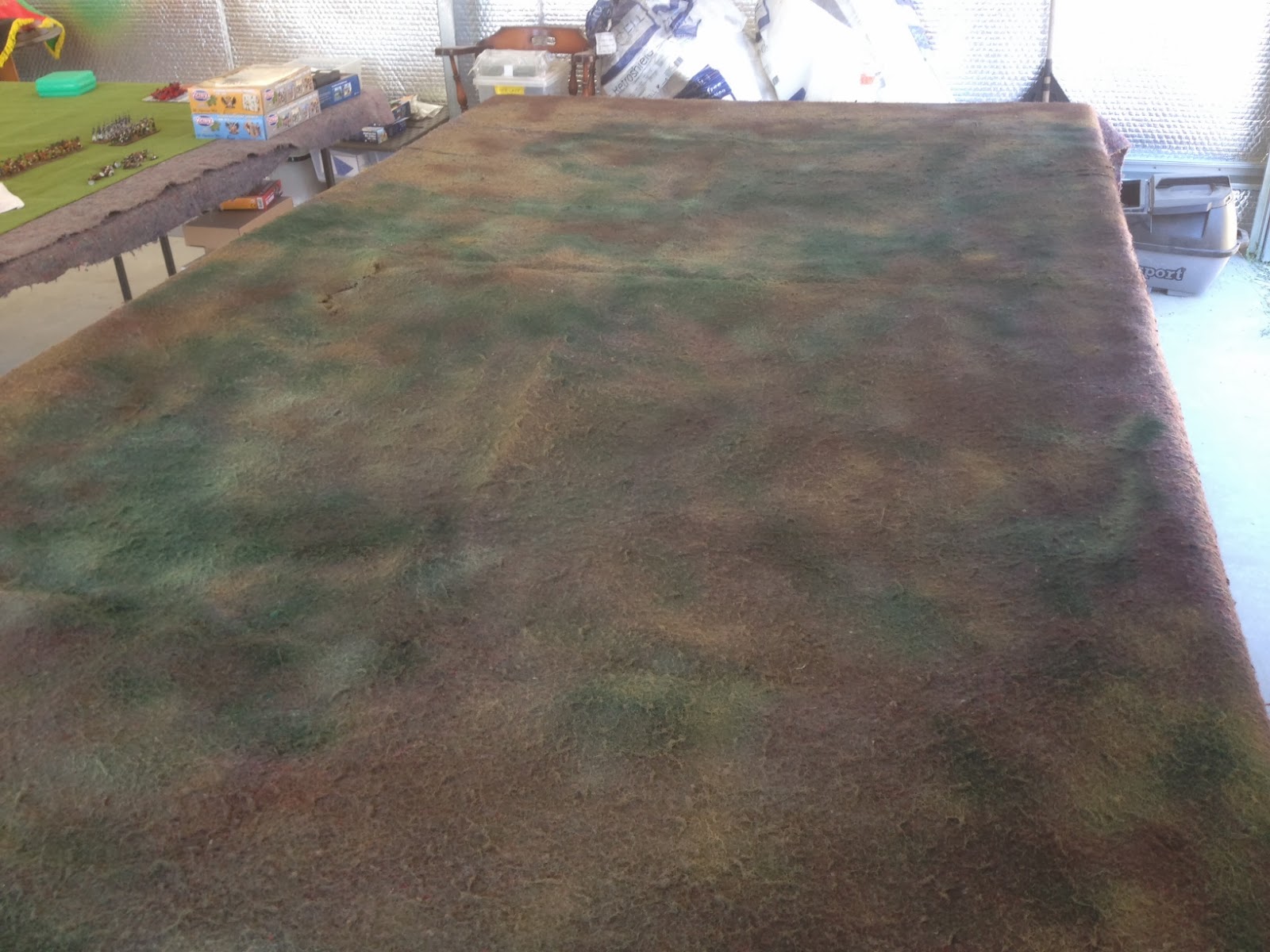 Add some terrain features like roads, crops and a building,..... 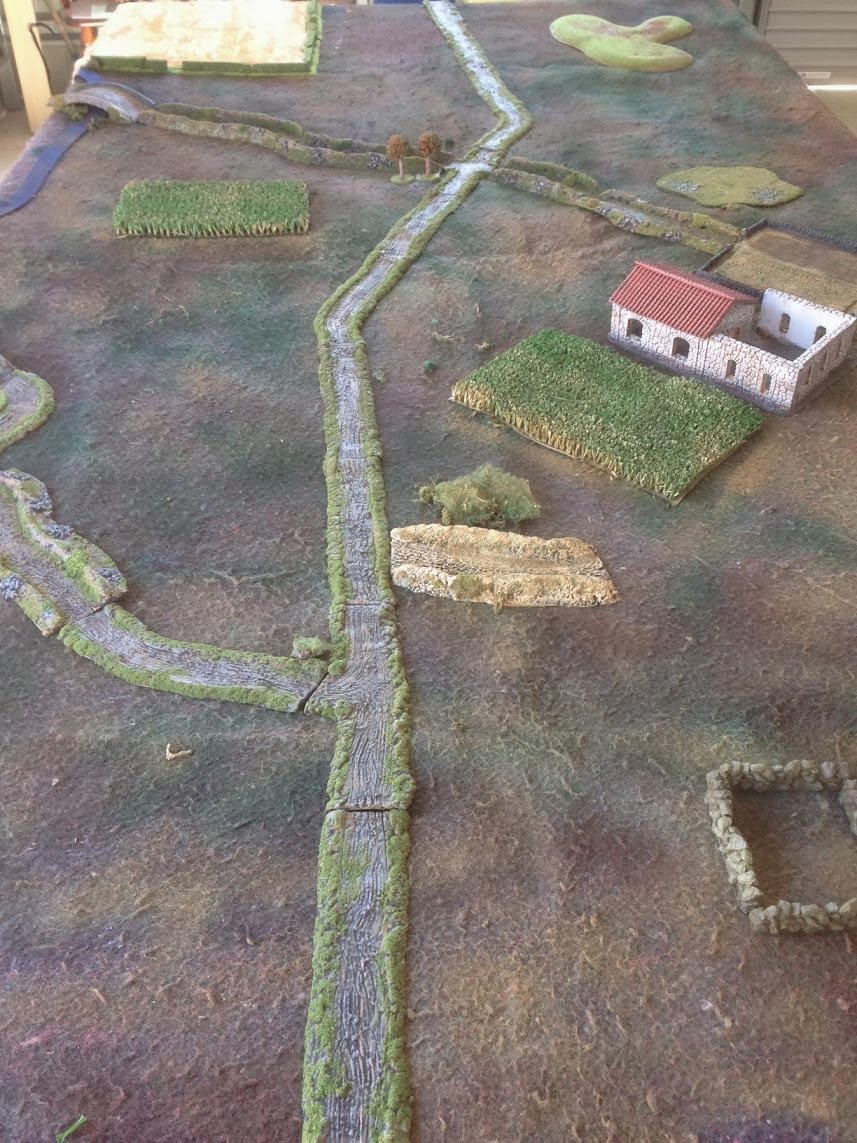 a '"teddy Bear' fur wheat field and a felt stream/ 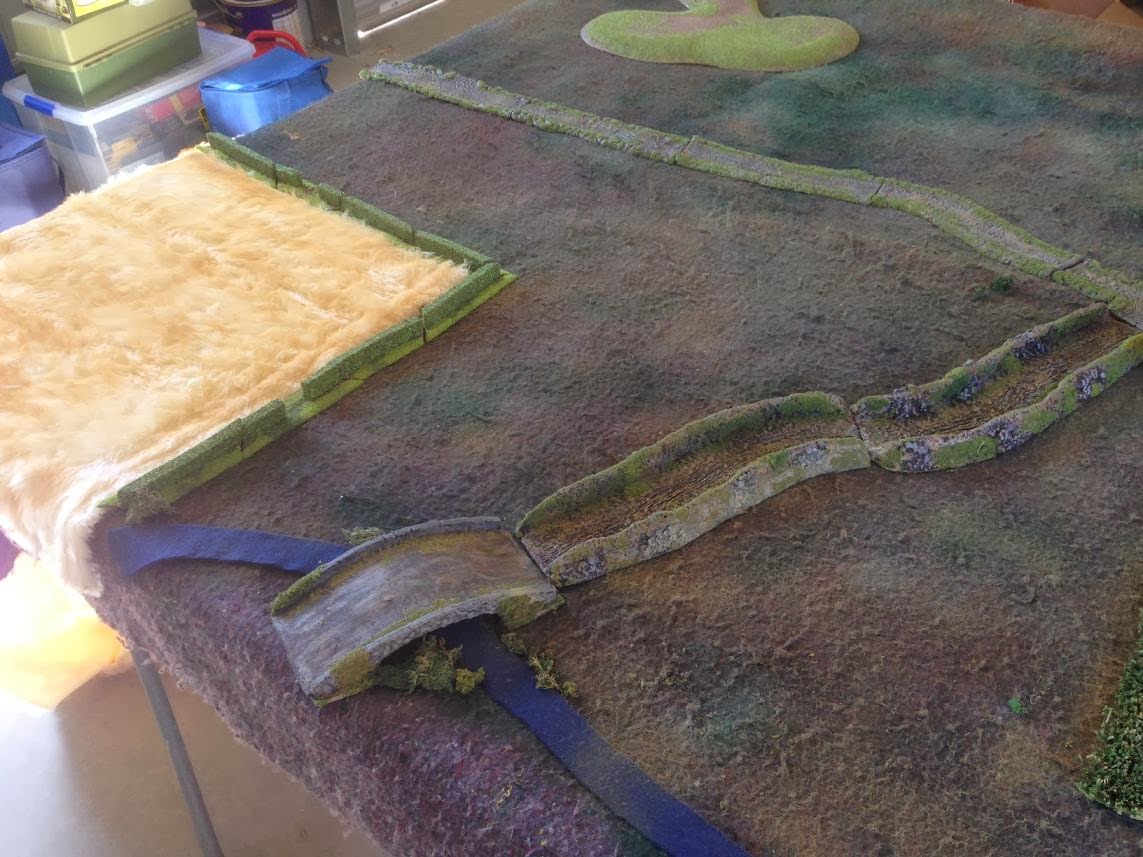 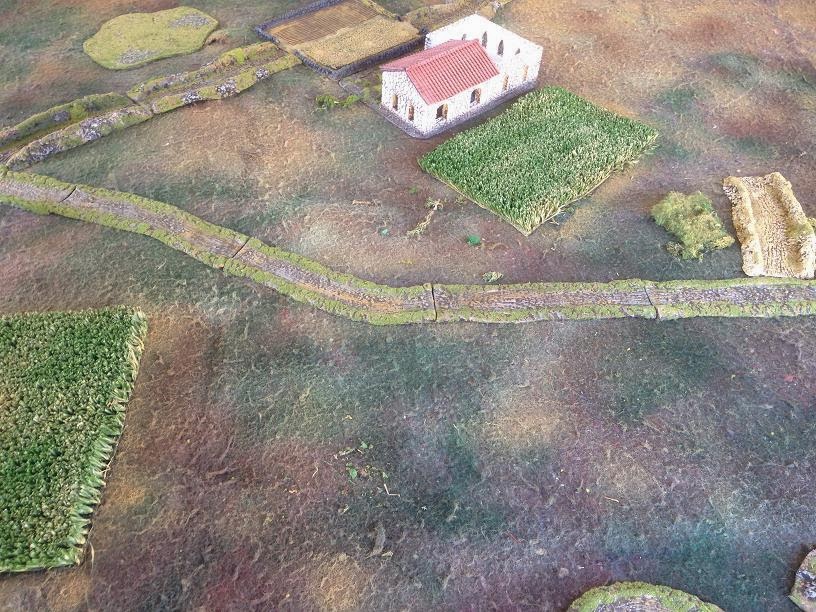 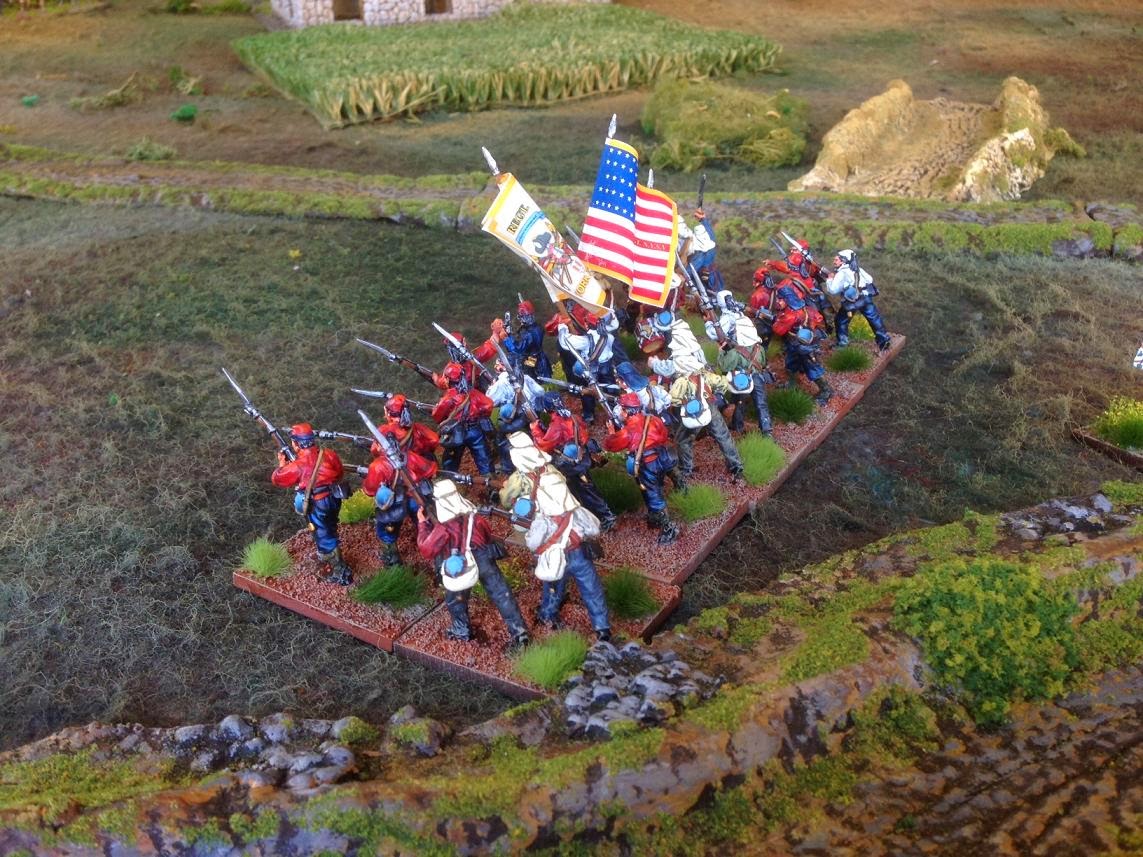 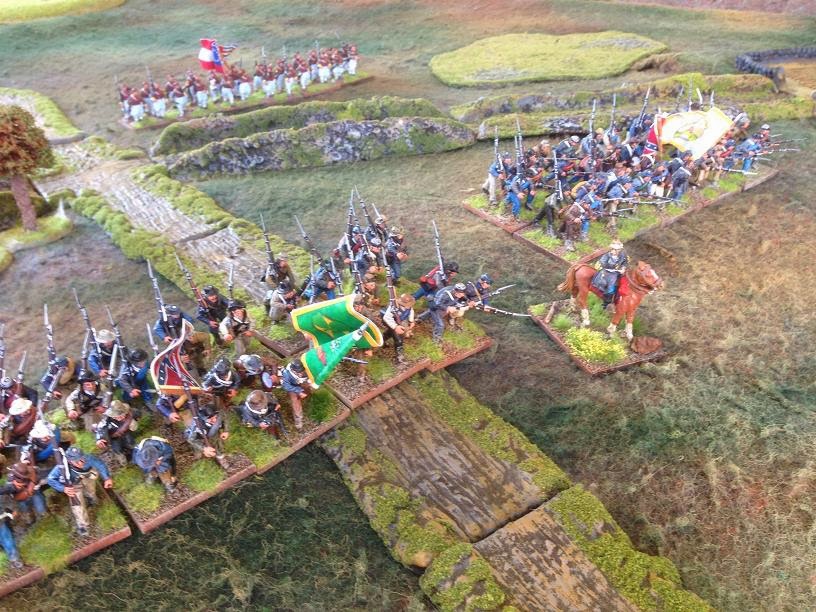 All in all it looks OK I think! 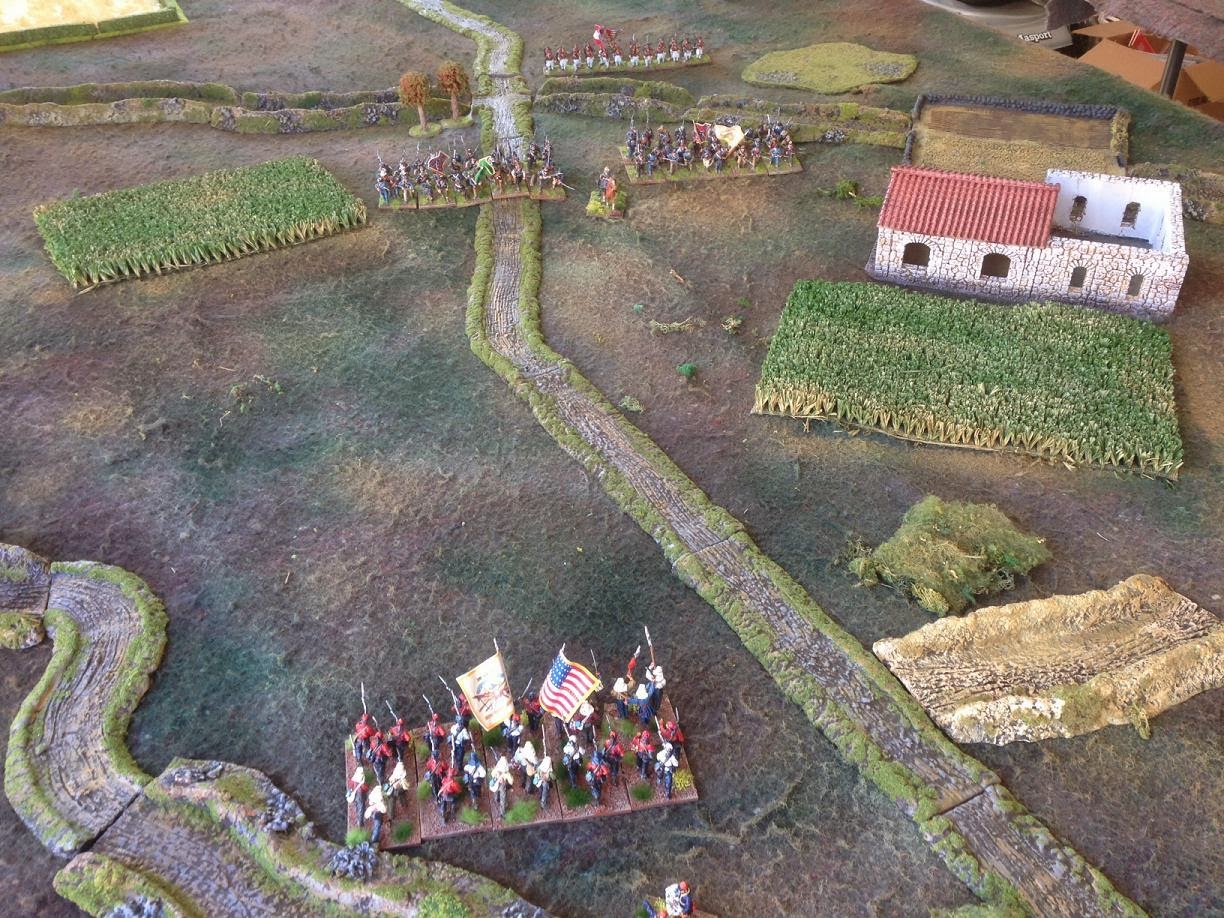 It will be interesting to see how well it stands up to the rigor of a few games.
I've discovered you can create some excellent hills by placing a couple of folded towels under the underlay.
As usual, comments are welcomed.
Posted by Trailape at 3:53 PM 3 comments: