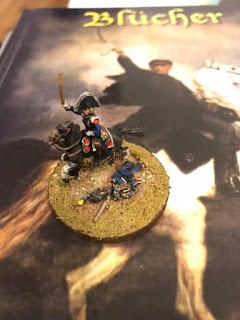 Rowan and I played a great game of Blücher today refighting Waterloo.
I obtained the scenario from HERE: HONOUR BLUCHER SCENARIO BUCKET
Here is some photos of the setup: 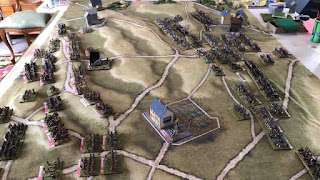 ABOVE: The view from the allied right and French left Flanks.
BELOW: Hougoumont closest to the camera with a view of the French deployment 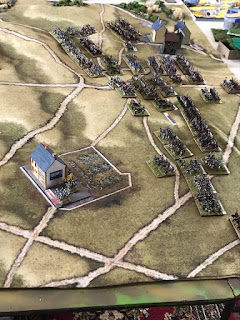 BELOW: The Allied line,.. 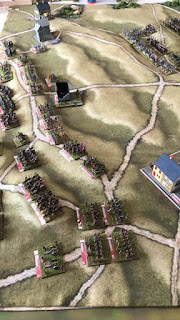 BELOW: The view from above and behind the Allied deployment. The French are at the top. 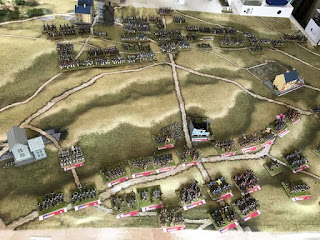 BELOW: Some of the Allies deployed, 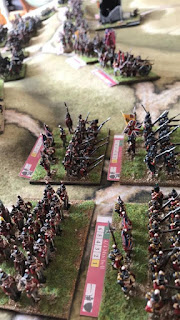 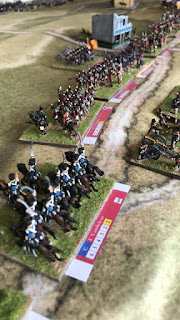 BELOW: The French 1st Corps deployed 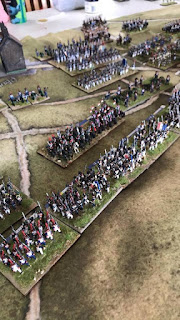 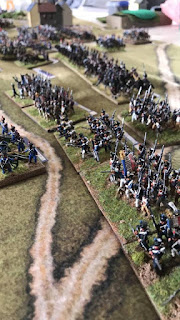 The French began at 1100 hrs with 1st Corps and 6th Corps advancing on the Allied centre and the Ridgeline of Mont Cent Jean.
The French 2nd Corps advanced on Hougoumont.
The French 4th Cavalry Corps moved off to support 1st Corps right flank and the Imperial Guard advanced behind the 1st Corps.
1st Corps failed to rupture the Allied centre however they did lay the foundations for a reasonable chance that The Guard might succeed.
After a violent initial Bombardment of La Haye Saint by some Guard Artillery a Brigade Of Young Guard successfully stormed the farmhouse. These young guardsmen were repelled by a Brigade of KGL. However a Middle Guard Brigade then was committed and the farmhouse fell into French hands again.
Whilst this was happening in the centre the cavalry of the French 1st Corps together with the heavy Cavalry of the French 4th Cavalry Corps supported by about 6 batteries (two bases) of horse artillery overwhelm the light Cavalry Brigades of the Allied Cavalry Reserve and the Netherlands Cavalry Division on the Allied left flank.
On the Allied right flank things had gone quiet. Marshal Ney had been killed leading an assault on Hougoumont and the emperor was satisfied that the attacks by this Corps (2nd) had prevented any further support moving to the centre.
Napoleon judged the time had come to rupture the Allied centre.
The remaining Imperial Guard Regiments were committed as 6th Corps swept onto the ridge to the left and behind Hougoumont .
At the same time the French 3rd Cavalry Corps launched themselves at the Household Brigade who (together with the Union Brigade) had been launching spoiling attacks on the vulnerable junction between 1st and 6th Corps.
The Allied Line was holding on grimly but had been pierced in the centre and left! They were very close to braking with 8 Brigades effectively destroyed and the a few others terribly close to routing!
But then the Prussians arrived,...
“I should have burned Berlin when I had the chance in 1806,...”! The Emperor was heard to mutter.
The Emperor has left two massed batteries and all of the Guard Cavalry in Reserve for just such an eventuality hoping that if the allies broke before the arrival of the Prussians their pursuit would prevent any hope of Wellington’s ‘infamous’ army of rallying or to protect his right rear if a stalling action was required.
The allies had lost the garrison of La Haye Sainte and 9 other Brigades. Their break point was 11!
The French had lost a single Brigade Of Infantry and 3 Artillery Bases (about 9 actual batteries, two of which were Guard Batteries).
The French would break at the loss of 14 Brigades!
I, as French commander concede defeat as even if I could rout the allies trying to also defeat a Prussian army would be too much of an ask.
Blücher (the rules) give a fantastic game. It’s a rare thing indeed to play the battle of Waterloo on a tabletop to a reasonable conclusion in about 7 hours but we managed it quite comfortably.

Here is a selection of photos from the game: 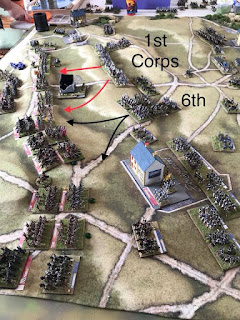 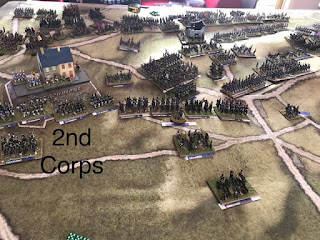 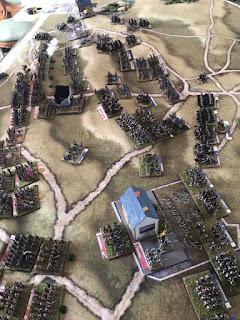 ABOVE: The British Household Brigade attacks French advancing troops in the centre just to the right of La Haye Sainte.
BELOW: The French counter attack the Household Brigade with a Brigade of Cuirassiers led by Kellerman. Kellerman is killed,... But the Household brigade retires. At the same time Dutch Light cavalry over runs a French massed Horse Artillery battery and tries to prevent 6th Corps advance. 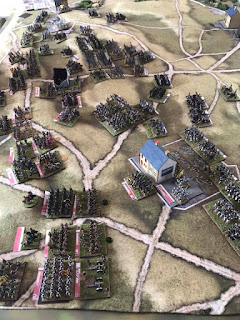 BELOW: The Dutch Light Cavalry cover the withdrawing Union Brigade. 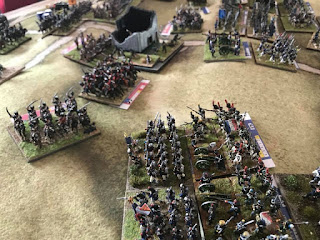 BELOW: The Young and Middle Guard are committed. 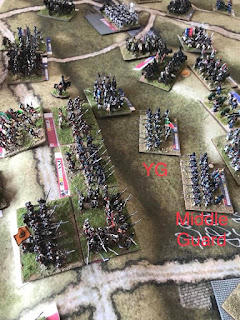 BELOW: Cavalry (Heavies of 3rd Cavalry Corps) rupture the allied centre as a Brigade of the Middle Guard capture La Haye Sainte. 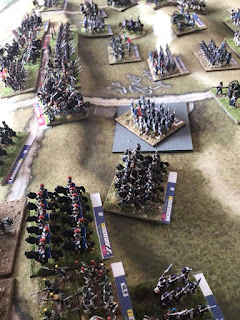 BELOW: Success for the French, but too late as the Prussian IV Corps arrives to bolster flagging allied moral. 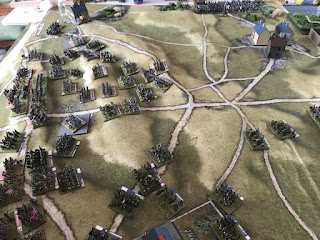 BELOW: The French Heavies of 3rd Cavalry Corps pierce the allied line as Wellington looks on. As French cannon boom the Imperial Guard infantry close in on the allied held ridge-line. 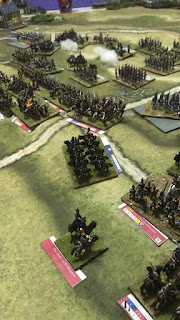 BELOW: Total French losses up until the arrival of the Prussians. 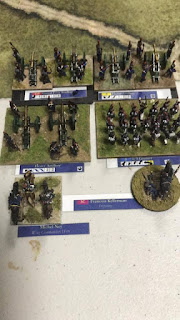 BELOW: Some of Britains finest.

BELOW: The French array for battle,...

BELOW: Troops of the French 2nd Corps and 3rd Calvary Corps