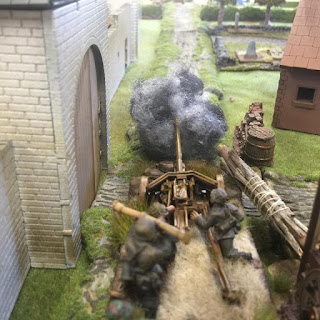 ABOVE: The SS men fire at the British Cromwell tank!
Hi Guys.
I live in semi rural Victoria and sometimes, (often) I struggle to find opponents to game with.
I think Chain of Command shows real promise as a a good old fashion 'Play By Mail' (PBM) game,...
Or should I say a 'Play By Social Media' (PBSM) game.
So I'll set up a game,.. Set the parameters (Situation, Mission ect) and then post some photos from the perspective of one (or both maybe) combatants.
Then request someone (anyone) to send orders, probably via 'Messenger' for secrecy if having both sides played 'remotely'.
I play the phases until a 'hinge point' is achieved.
Maybe a CoC die has become available,...
Maybe the original orders are getting us nowhere,...
And then I play the game to a conclusion.
So with the that in mind I set up the following game and soon had a nice chap named Kris offer to play the Platoon Commander for the British.
Here's how it played out,...

First, lets set the scene, the scenario and the very very 'Quick Orders' for the British from Company HQ.

7th Battalion, Duke of Wellington's Regiment
A Company
3rd Platoon
25 June 1944
West of Caen
The last of the young corporals moved into the hasty 'O' Group. The Platoon Commander gave a curt "Cheers" to the Battalion Adjutant Captain Morris and then turned back to the three corporals. Sergeant Crab was collecting 2 inch Mortar rounds from the CSM,...
"Bloody hell Sir, that's a grand total of 5 smoke and 3 HE! I'm hardly going to blast Jerry of the ridge with this"!
The CSM gave a sharp reply:
"Stop ya whinging Sergeant! In my day we just had rocks,....
Besides, the Trailapes (Artillery) will do all the stonking you need lovely boy"!

"Quick Orders.
Situation:
Ahead is the crossroads at Petit Fromage.
Enemy:
It's believed elements of the 12th SS are holding the objective.
We expect them to be supported by 'some' armour,.."..
Corporal Barry Haree chimed in:
"Probably bloody Tigers"!
Lt Baker frowned:
"Thank you Harry for that positive input.
May I continue?
Fritz has at least a platoon is in there. The 12th SS are all young die hard Nazis. I don't expect we' take many prisoners.
Friendlies:
We have 3 Cromwells from the 24th Lancers in Support.
We have air supremacy, but with the weather being so shite don't expect any air support.
Artillery is stonking the crossroads as you can hear.
Mostly 5.5 inch.

Execution:
(This is the bit the remote PBSM player contributes).
As I told him:
Your orders can be as detailed or as brief as you want.
Your intent is really all that is needed by me.
For example.
1 section on the right is to,...
2 section on the left is to,....
3 Section will be in depth with me.
One tank will be in support of each section
Or
All tanks will mass on the left / right / road,....
You get the idea.


"Section 1 to push towards the stone fence in front of position and then to remain on overwatch looking towards the houses forward and to the right flank.
The 2 inch mortar to support and drop smoke as required for sections 2 and 3 Section 3 push forward quickly using the field as cover aiming to get to the stone wall to the center Section 2 to push into the just vacated building of section 3 and then to follow in haste through the field towards the stone wall to the right flank more so. This will stop the sections bunching up. Cromwell on the road cautious advance up road ready to swing in behind cover when the enemy appears. The lads in section 1 are to be on the look out for panzerfausts or any AT weapons.
Common men lets at it, Jerry's not going to wait all day for us!"

"Admin and Log:
We have the Adjt with us! BHQ obviously sees our company as the main effort and the OC sees our platoon as the tip of the spear,...
We also have CPL Avnil the medic with us,.. So if you cop a Blighty we'll have you sorted.
Command and Signals:
The Radio nets are unchanged. Company signals will be back at the FUP, with the Adjt.
Chain of Command is Me (Lt Baker), then Sgt Crab, then Seco 3 Section, Seco 1 then Seco 2.
The rest can fight it out,...
The Adjt will feed the lads forward as required so I'll be with you lads all the way.
That's it,...
Move out"!

I determined the details on the individual 'BIG MEN' using the matrix in PLATOON FORWARD available from Too Fat Lardies. I highly recommend this PDF as it can be used with any rule system not just CoC or IABSM.

Platoon Commander Lt Baker:
Optimistic family man  (Popular with the Lads) and reckless. He was a salesman at his father's corner shop before the war. Joined the Regiment in June of '43.

Platoon Sgt Crab:
Likable and a 'True Believer' in their cause. "We're in a great crusade Lads! Let's kill all these Nazi swine"!
'Mud' has an even combat temperament. The lads respect his rank and the man (+1) for 'Rally' purpose, (removes one extra shock every time he Rallies the lads).

Section 2 CPL 'Bibles' Bower:
Glum and Religious with an even combat temperament (+1 dice when firing)

I sent SITUATION REPORTS (Sit Reps) to Kris as the game progressed. 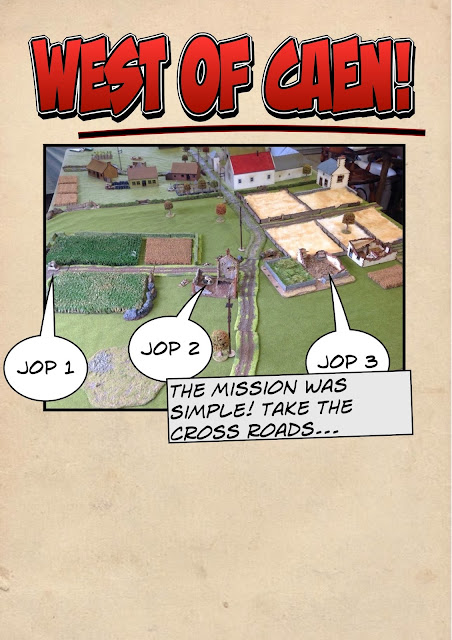 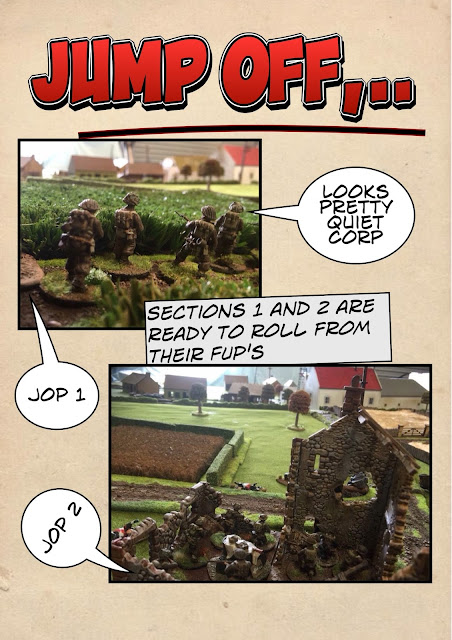 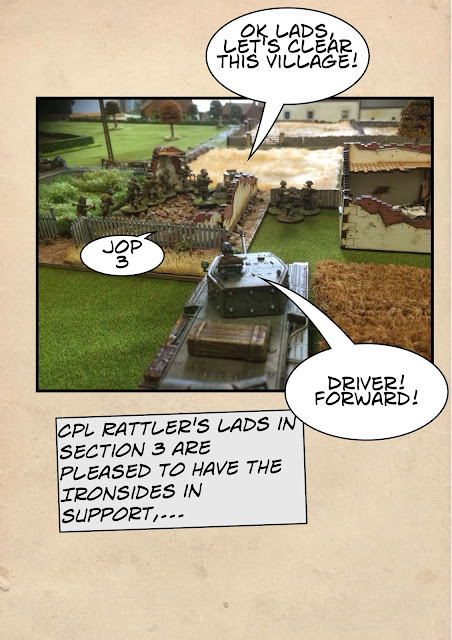 The two British sections on the right briskly moved forward but soon Section 3 came under heavy fire from 2 MG42s generating 18 dice worth of fire and despite being in hard cover the leading section started taking casualties.
Their Section Commander Cpl Rattler was soon down with a wound!
The Platoon Commander sent SGT Crab off to assist 1 Section that was busy moving forward towards the hedges on the slight rise ahead whilst he himself moved up with the support section behind 3 section.
As 1 section advanced they heard the rumble of a tanks engine in the village ahead and then saw movement.
They identified the enemy tank as a TIGER and reported its presence.
To complicate the situation even more a German 75mm Pak Anti Tank Gun also made its presence know when it opened fire on the Cromwell tank on the road, Call Sign (C/S) 2 from the British Armour support troop.
“1 this is 3-1!

Sit Rep
Section 1 has reached the hedge on the ridge and is in Overwatch
Our mortar is directly to their rear in the corner of the wheat field in position to provide Fire Support
Section 2 is positioned to provide covering fire for section 3
Section 3 is directly opposite the large farm building with the Red Roof.
Two Ironside elements of Cromwell Tanks are to the rear of sections 2 and 3
Ironside C/S 2 Cromwell on the road has been engaged by a 75mm AT gun on the road near the Farm complex gate.
The round missed!
Enemy tank is unobserved. Assumed to be in amongst the smaller buildings opposite 1 section.
Wait,.. 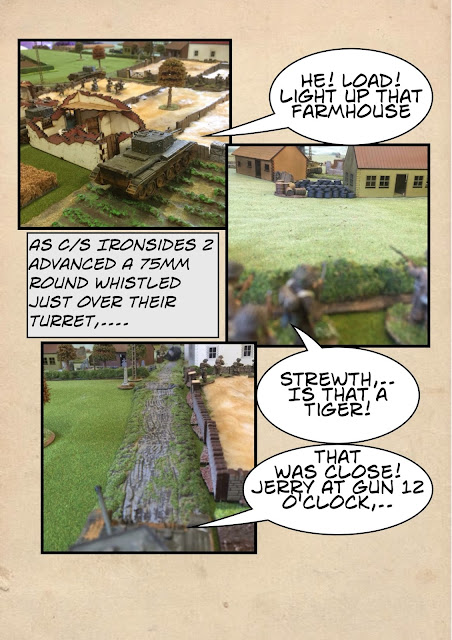 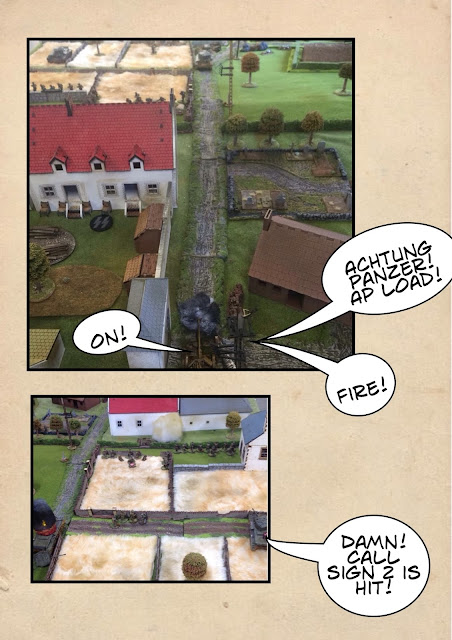 The Cromwell on the road returned fire on the Pak 75mm with HE and quickly killed one of the SS Gunners with a blast of shrapnel from a near miss,...
However the SS Men were not to be rattled and their third AP round stuck the Cromwell directly in the Hull MG position.
C/S Ironside 2 burst into flames with just the Sergeant commander tumbling out of the turret with a shard of metal in his right arm.
Meanwhile Section 2 moved off to their right to prepare for an assault on the large red roofed building that was giving Section 3 such grief.
Simultaneously the remaining two Cromwell tanks fired HE rounds into the Farm Building now called 'BIG RED'. The fire hardly slackened from the the building however and Section 3 suffered another casualty and more 'Shock'. 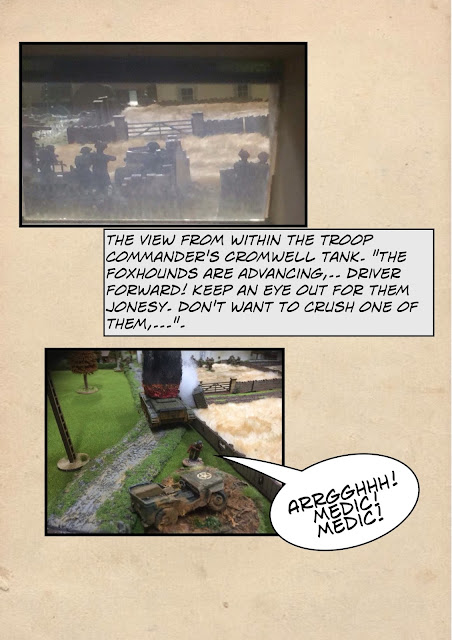 By now Section 1 reached the 'Stone wall' at the top of the slight rise to discover it was just a hedge.
Now the two SS squads in the cluster of buildings and hasty barricade burst to life!
Their four MG42s hurled buckets of lead into the unfortunate Tommies,...
The German tank rumbled up in support and the British sergeant identified it as a Panzer IV NOT a Tiger.
(I deliberately fed back some false information here)
As soon as the Brits noticed a tank I would roll a dice and based on rank / experience give an accurate or inaccurate target description.
Initially the Corporal rolled poorly (he rolled a 5 when he needed 1-3) and screamed "TIGER"!
The more experienced Sergeant however was less prone to making the same mistake (needing a roll of 1-4 to get it right)

The PzIV still added some punch however.
To counter this the Brit 2 inch Mortar dropped some smoke to blind the SS Tank and one of the MG42s. This was in addition to the smoke that they had dropped earlier in front of 'BIG RED' permitting 2 Section to get in close for an assault on that building. 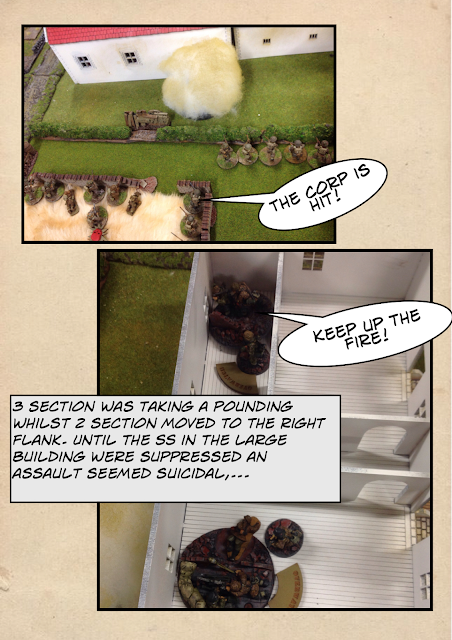 With smoke covering the Brit advance onto 'BIG RED' the Germans within that building withdrew into the farm yard.
The Tank fire had killed one of them and cause a little shock. 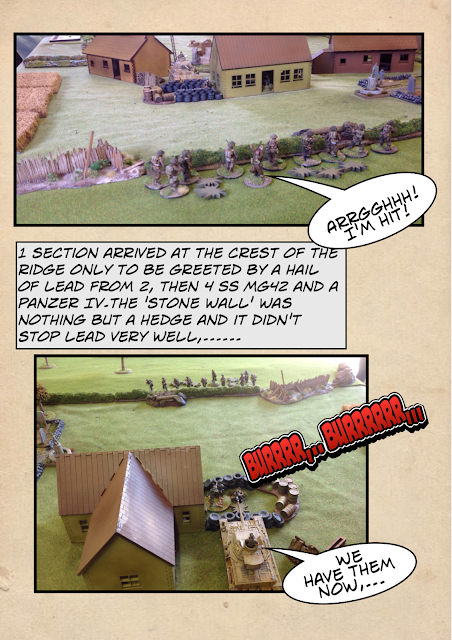 The smoke fired from the british 2 inch mortar that fell infront of the German tank did require it to be repositioned.
In doing so the SS tank commander exposed himself ever so slightly to the British Cromwells

Shots were exchanged by the 'Hull Down' tanks but luck was with the British tankers and soon the Panzer IV was a blazing wreck!
But there the good news ended.

The fire from the SS MG 42s however did not slacken,... 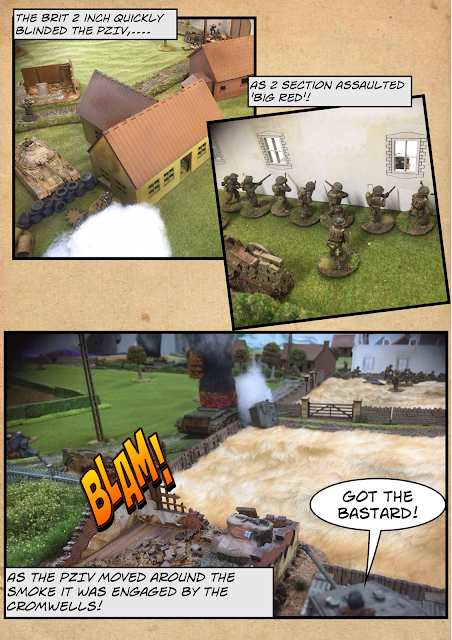