Hi Trend Setters
Well Fernando Enterprise has sent me a picture of a Provisional Croatian Regiment Voltigeur that needed correcting. The 1st effort(you may recall from a earlier post) had my Voltigeurs in GREY Jackets, (the artist had issues telling the differnce between Jackets and Greatcoats). Anyway, it appears we're getting there. The left hand figure was the 2nd attempt, (no cuffs painted, epaulets missing their yellow trim), and his waistcoat is GREEN.
It's should be white as per the picture I sent. The second from left fellow is the3rd effort. Almost there! Turnbacks, and cuffs painted and epaulets have their yellow trim. Still no white waistcoat however. "SIGH"
Finally on the the right we have the most recent effort. As you can see the waistcoat is now been painted white. Great, and they also sent a picture of the figure from behind. He does look great from behind ,... Ummmm, I don't believe I just said that (gulp).
All In all, I'm pleased with the results,.... Cheers
! Posted by Trailape at 5:02 AM No comments:

Ancients From Fernando and "some other stuff"

Hi All
As promised, I've posted some pictures of ancients I asked Fernando Enterprise (FE) to paint.
These figures were actually sent prior to the dispatch of my 15/18mm Napoleonic figures, but I thought I'd upload these pictures just to show you what you can expect from FE if you ask for "SHOWCASE" quality.
The first image is of a FOUNDRY 28mm Hypasapist Foot Companion, (middle figure).
He's painted to "SHOWCASE" quality. The shield is hand-painted, (no, it's not a decal). It's a profile of Alexander the Great as the Son of Zues. The photo doesn't do the figure justice. It's a real work of art. I have a unit of 24, (and yes they all have the same magnificent shield)! 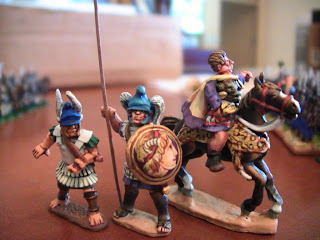 The mounted figure on the right is an OLD GLORY 28mm ALEXANDER, (from the OG Macedonian Command pack if I recall correctly).
Again, painted to "SHOWCASE" quality. Again, the figure is brilliant! The horse is really nice. I should have told FE to paint the Horse Black, ala Buchephalis (excuse the spelling

), but I forgot to. Just goes to show that you really need to take your time in preparing your order.

Finally the fig on the left is a FOUNDRY Macedonian Pikeman, (less Shield). Painted to "COLLECTOR" quality. These guys, (about 64 of them) were quite nice.
The next photo is of MIRILTON 15mm medieval Russians 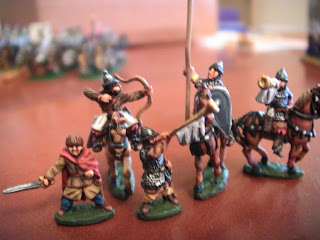 Sorry about to dodgy quality of the photo

All are painted to "SHOWCASE" quality.
Again the photo doesn't do the artist justice. I've shown these guys to a few mates, and they all agree the are some of the best painted 15mm figures they have ever seen. I'll upload a better picture with the next few weeks.
I also got some Marian Romans and Carthaginians in 28mm from them. I'll try and post some more pictures soon.
By the way, I'm listening to a podcast as I type; and it's rather good. Called:
There is a bit of content that's not really to my liking (especially when he talks of Lord of The Rings stuff), but it's kinda like listening to Radio for wargamers. You can check it out at:
http://www.meeplesandminiatures.co.uk/
Cheers
Posted by Trailape at 2:27 AM No comments: 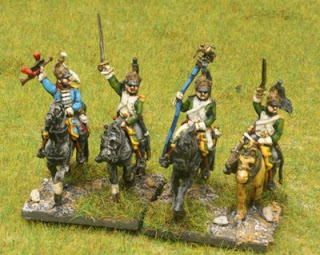 (Left: French Dragoons painted by RBP)
Hi Team
I've received confirmation from Neil at Reinforcements By Post (RBP), that he's finished my order and is almost ready to post. Just some packing and wrapping to do now.
Throughout the whole process, (pre-order questions, dispatch to his team in Bangladesh, and actual painting), Neil has been very helpful and maintained excellent lines of communication.
I'll post a more detailed review of the work done by RBP once the figures arrive, but in the meantime checkout the pictures to see what the team at RBP have done.
All figures are painted to RBP "Museum" standard, (equivalent to Fernando Enterprise's "SHOWCASE" standard): 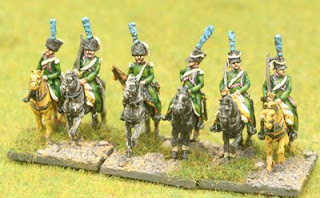 Here at left we have some French 9th Chasseurs A Cheval. Part of IV Corps of the Grand Armee of 1812.
The basing looks pretty good. Initially I didn't want any basing done, as I normally prefer to do that myself, but it's so cheap to have RBP do it, (cheaper than if I purchased the bases and did the basing myself); I would have been a mug to do it myself. Neil's guys did a better job than what I could have pulled off myself anyway. 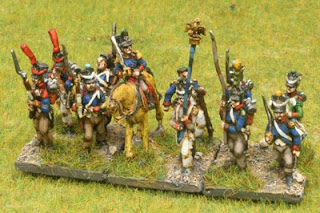 The miniatures are AB Miniatures purchased from EUREKA MINIATURES here in Victoria. Have I mentioned what a great bunch they are at Eureka?

Next (at right and below) we have some French Line Infantry. Mostly OLD GLORY (OG) figures, with a few AB's thrown in for some additional variety. OG are the type of figure that will look either really good or rather CRAP depending on the skill of the artist. As you can see here, they look FANTASTIC (I think). As the figures were to be based for AGE OF EAGLES, they should be 4 per base. Neil's team did a great job of fitting on the casualty figures and still making the bases look suitably "Regimental". Furthermore, as my original intention was to do my own basing, I sent a number of figures that weren't divisible by four. Consequently Neil had to make best with what he had, as explained in the email he sent:

All good suggestions, and exactly how I would normally do business. But like I said, I did intend to do the basing once I had the figures back home. I'm pretty happy with the results


Here at left we have some of the 13 Highlanders I sent. These guys were to be painted to match a sample I sent. I can say it appears that this has been done. I'll confirm that the job has been done to perfection once I have the miniatures here. I must say though they look pretty darn good! Again, the figures are the magnificent AB Miniatures.
Finally we have some OG 10mm Prussians. Now i must say I'm very impressed with the work done here. I think I'll base these guy to use with my the MIGHT & REASON rules by Sam Mustafa, (a pretty good set of rules I think). Check them out at:
http://www.sammustafa.com/mr.html

FE's efforts at my Italian Guard Conscripts, (Officer and Drummer) 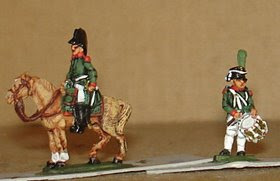 Hi Team
Fernando Enterprise, (FE) has sent me a bucket load of pictures of figures I've sent to them for painting, (see my ealier posts).
Check them out! First we have a Mounted Officer of the Velites of the Italian Guard and a French Drummer of a Line Regt in "Imperial" Livery: 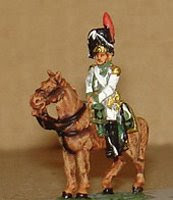 I think the Italian chap looks rather grand, (both AB miniatures 18mm scale figures).
Next we have a Grenadier and an Eagle Escort (or a "Deuxieme Portaigles" as we say in french) of the French 84th Line, and two Grenadiers of the 108th Line: 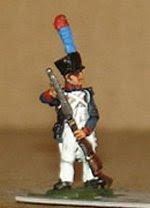 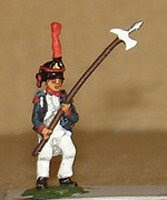 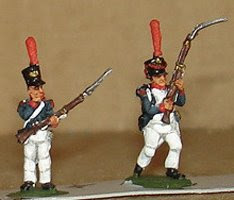 All are AB's except for the chap bitting the cartridge who is a "Eureka Miniatures" figure in "1812" Bardin Regulation uniform. They look rather good I think.
Next is the French "Light" Infantry. From left to right, Carabinier, "hornist", Voltigeur and finally a Deuxieme Portaigle with Halberd. 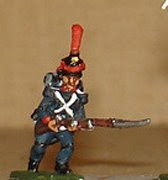 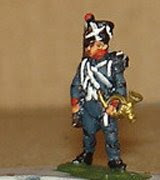 Next we have Some "Middle Guard" Fusilier Chasseurs : Eagle Bearer, (I guess I'll need to straighten out the pole once I have them back home), Officer and Fusilier. 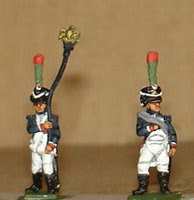 This is a classic example of figures being painted by non-wargamers. Any wargamer would "straighten" any "bent bits" prior to painting. I just know once I straighten out this guys flag pole (Staff), paint will be shed, "sigh".
Another "puzzling development" was this chap:

I asked FE to paint up some figures as the Provisional Croation Regt. Not a big asked you'd think, considering I provided plenty of pictures of the units uniform. When this picture turned up I had no idea who he was ment to be. The tag said "Fusilier 84th French Line". But with GREEN pants and a grey / white jacket?? "Nah, that can't be right"! Then I though, "he looks a bit familier though".
"But of course, he's a Provisional Croat", (that explains the green trousers). But what's with the greyish jacket? Well one of the pictures I sent have a voltigeur in a grey Greatcoat. Now any devotee of Napoleonic wargaming could tell the difference between a Greatcoat and a jacket, but not the dude that was painting this guy. "Sigh" (again). I hope FE understands the corrective advice I've sent. Below are the other Provisional Croations. 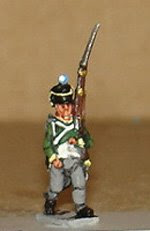 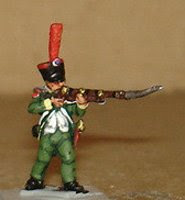 Another example of incorrect "tags" was this "Prussian Gun": 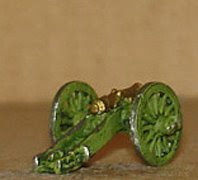 Problem is I only sent FRENCH guns to be painted. At least it's the correct colour. Yipppeee!
Finally some Joseph Napoleon Spanish (Drummer, Sapper and Eagle Escort), and French Line Voltigeurs. 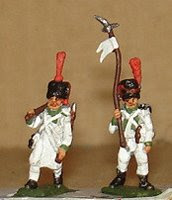 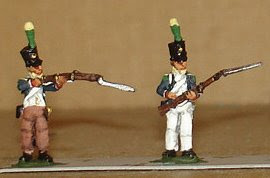 I do like the look of the "Eureka Miniatures" Line Voltigeurs.
That's all for now!
Cheers
Trailape
Posted by Trailape at 12:36 AM No comments:

Hi Team
Well I recently received an update from Fernando Enterprise regarding the progress of my order. They've sent pictures of a Gunner from my French line Artillery (Left) 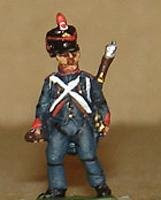 and a Chasseur from the 18th French Light, (Right).
I'm rather pleased with the results, but can't go firm on my opinion until I have them in my hands. Hopefully I'll have them home within the month.
Another update: Neil at Reinforcements By Post (RBP) tells me images of my figures will be ready for viewing in a few days. Recently I also asked him to amend my order an include basing. It was no problem but added about 3 weeks to the completion date, (as RBP actually manufacture their own bases to customer specs).
Again, I hope to have them here at home within the month.
Finally I've ammended the spelling of "Befreiungskrieg" thanks to some assistance from Jim from:
http://colcampbellbarracks.blogspot.com/
Thanks for the pick-up Jim! Your Prussian is far better than mine.
That's all for now.
Cheers
Trailape

Posted by Trailape at 7:45 PM No comments: