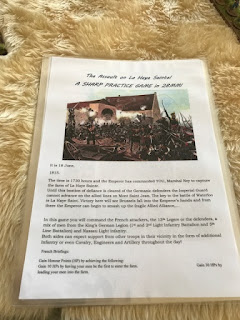 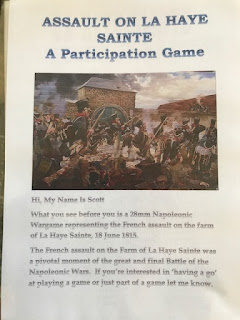 Hi Team
Recently I hosted a Sharp Practice Participation / Demonstration Game at a Local Gaming Convention, BADGACON. The showcase for the Bendigo And District Gaming Association, BADGACON is in its third year so I wanted to offer a gaming experience different to the usual fare of Fantasy and SciFi and 'Canned War-games' such as Team Yankee, Bolt Action and the like.

I thought a participation game would be good activity and something that I could make would look good might attract people to the hobby.
It also had to be of an Historical nature.
The game also had to be simple to play, with enough detail to give the gamers some decisions to have to ponder over, engaging for all concerned, fast paced and above all,.... FUN.
The game also needed to be played to a conclusion in at least 2.5 hours. 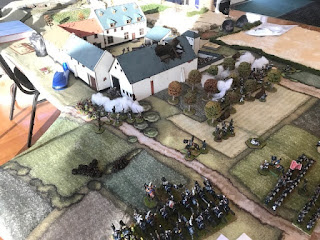 I immediately thought that gaming the assault and fall of La Haye Sainte would be a great action to replay.
I'm fascinated by the '100 Days' and have plenty of reference materials on the Campaign and in particular the battle of Waterloo.
So I'd committed to put on some kind of activity and I'd settled on a specific action,....
Now for the details,.... 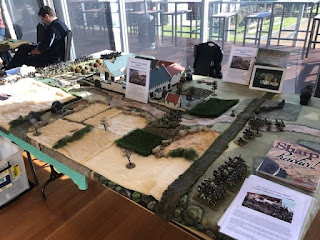 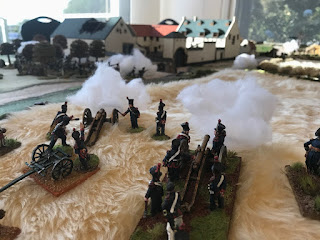 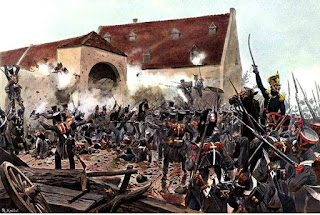 Firstly I need to settle on a scale or 'size' of game and for me I think 28mm is the best for a demo / participation. Big enough to catch the eye and visible to spectators and participants alike. The play or game area couldn't be more than 8 feet by 5 feet, but ideally something closer to 6 x 4.
Ultimately it was an 8 x 4 table we played on
I next settled on 'Sharp Practice 2' as my rules of choice.
These rules are easy to play even if you've never read the rules and as long as the person running the game understands them it'll be fine.
The participant simply needs to say "I wish to do this followed by that,...".
The 'Game host then simply states "Yes, you can do that, now roll two D6 an see how far you move,..".
SP is also gives a very realistic game and one that's fast paced.
I initially looked at 'The Complete Fondler' (CF), a TOO FAT LARDIES Campaign / Scenario book released back when Version One of Sharp Practice was released, for some inspiration.
Straight away I was drawn to the 'Fondler's Waterloo' scenario.
The Battle of Waterloo is reasonable well know, I have all the correct figures already painted and I have the beautiful 4Ground model of La Haye Sainte (LHS)!
The CF scenario is a series of engagements (3 in total) around and in LHS.
Taking a leaf from the TFL CF scenario I decided that the game would be played as follows:
The French would attack LHS in a series of 'Waves', (4 Maximum), with 2 wave each day as follows:
The French first wave. Game commencing at 09:30AM to 12:30PM
LUNCH
The French second Wave. Game commencing at 1:30PM concluding NLT 4:30PM
Day TWO
Repeat as above for French Waves 3 and 4.
If the french were successful in taking the Farm in the first wave I'd simply rest the table and let the gamers switch sides! 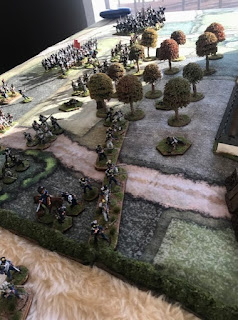 ABOVE and BELOW:
Photos from the game in play. 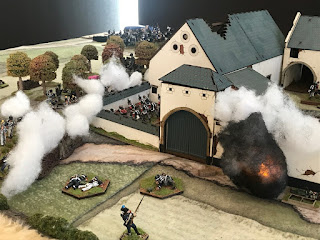 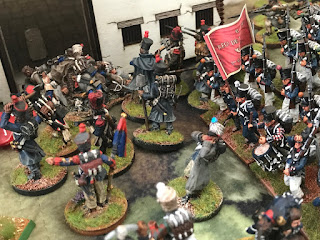 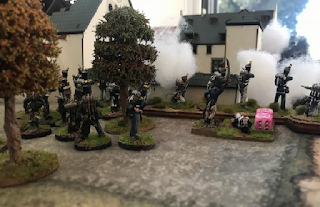 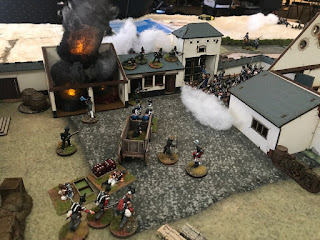 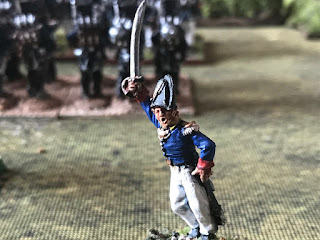 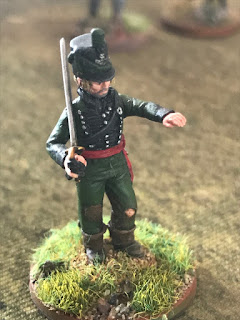 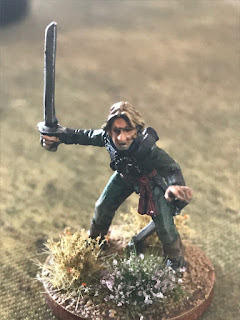 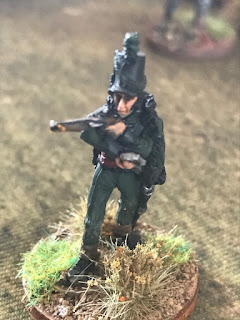 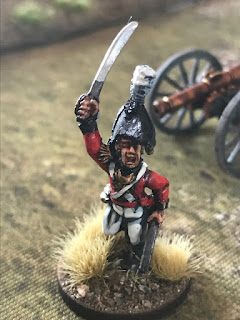 
The French:
Each wave would consist of two 'Forces' each consisting of two formations or 24 Line Infantry (Fusiliers or Chasseurs), and two formations or 12 Voltigeurs.
In addition each formation would have a choice of the following to be added to them:
a Troop of two Cannons (one medium Howitzer and one Medium Gun)
a Storming Party of Pioneers under the command of Status 1 Leader Maximillian Shagolotte and his inconceivable large 'Chopper' (axe)
an additional force of 12 Grenadiers (deemed 'aggressive')
Giving a grand total of:
96 Line Infantry
60 Skirmishing Light Infantry (Including the 12 Grenadiers)
6 'Pioneers' (Aggressive)
2 'Guns' with 12 Gunners. 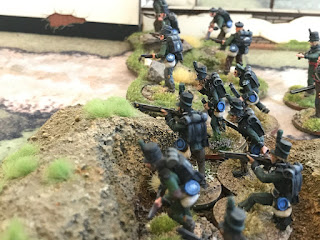 ABOVE: the 95th Rifles in The Sandpit

Leaders were allocated to the French as follows:
1 x Status 4 Leader Marshal Ney, and overall Commander of the French effort;
2 x Status 2 Leaders (Each commanding a 'Force' of Line and Lights plus supports) as allocated by the CinC (Ney);
2 x Status 1 leaders (To assist the Status 2 'Battalion' Commanders);
2 x Status 3 Leaders (To Command the two formations of Skirmishers) allocated to each of the Line Infantry formations;
and,
1 Status 1 Leader of the Pioneers.
There was the possibility the could get a replacement cannon, but no replacement Gunners.

By contrast the French would have their force fully reconstituted (less Leaders) as each wave was activated.
The french player could 'Recall' any wave at any point and get all his 'dead' returned to the ranks.
Additionally the French would have Access to a formation of 20 Cuirassiers from the 2nd Wave onward.
These would be triggered if any allied troops ventured out of LHS in a group of 6 or more.

To add a bit of internal 'Friction' I also gave each leader some 'Personal Goals' they could achieve in addition to gaining 'Points' or 'Honour' for simply winning the game.
Some also had extra skills and traits that would prove useful or incentivies players to play a certain way. 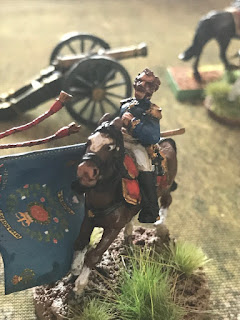 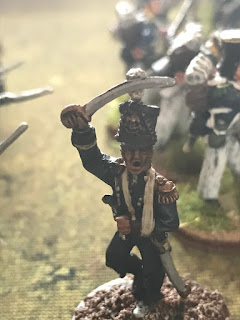 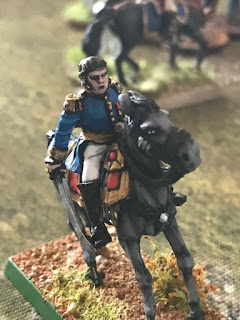 These were as follows:


Gain 30 HPs by leading your men into the farm.

4. Chef d’Battalion Henri Renault: Status 3 Leader. PG: Enter the farm and carry off the young daughter of the farmer within.

6. Lieutenant Hogo Boss: Status 1 Leader. PG. Be the first man into the farm!

8. Captain Maximillian Shagolote: Status 1 leader: PG: Smash in the main gate house gate and lead your men in a successful Hand To Hand (Fisticuffs) attack. Fight with 4 Dice! Plus 4 on any task involving strength!

To compensate for lost leaders the French CinC (Ney) could send an ADC to assist and 'Force' by voluntarily 'shedding' a status level and creating a new Status 1 leader. For example Ney could reduce himself to a Status 2 leader but GAIN 2 status one Leaders or 1 status 2 Leader. 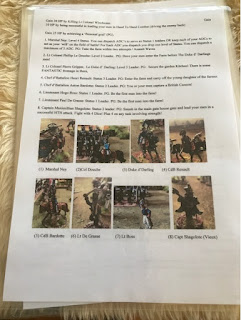 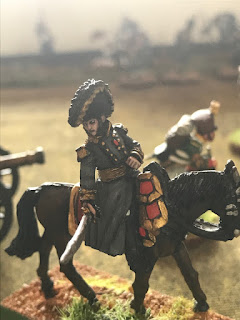 Gain 10 HPs by having your men be the first to repulse an assault.

Gain 25 HPs by leading your men into Hand to Hand whilst outnumbered.
Gain 30 HP by Killing Marshal Ney.
Gain 20 HP by Killing a French Battalion Commander

The Allies would only have those leaders and troops listed above to play out the entire battle.
Also, after the french 2nd wave was activated they would also have an increasing chance per turn that 12 x Dutch 6th Hussars and 8 x 5th Dutch Light Dragoons might ride to their assistance under the command of 1 Status 2 Leader,...

If the French Cuirassiers were activated then the Netherlands Cavalry would also be triggered, otherwise from turn 3 of wave 3 the Allied cavalry would arrive on the field on a roll of 5 or 6 on a D6 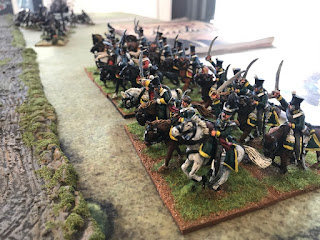 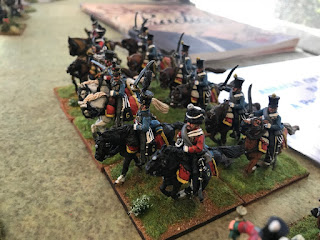 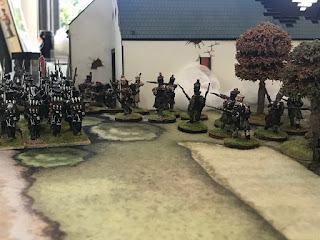 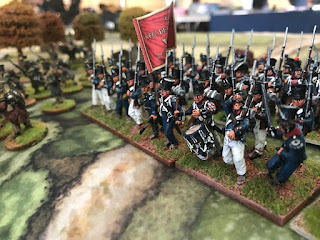 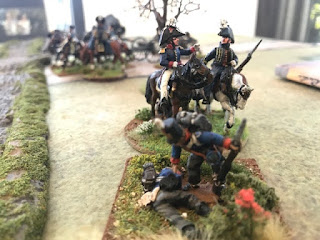 ABOVE: The Prince of Orange. A 'Non Player Character' on the table just for colour,... 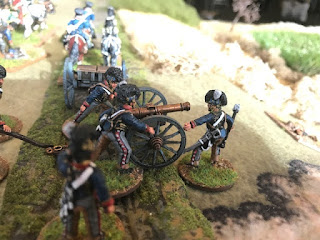 ABOVE: The RHA coming into action 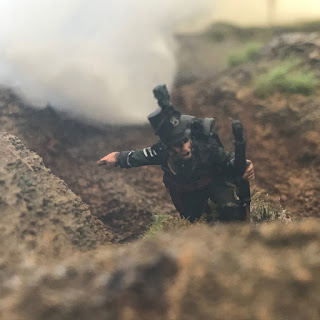 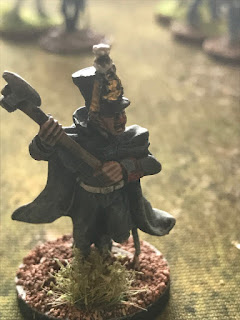 ABOVE: Captain Max Shagolotte and his HUGE chopper