An Introduction to Maurice 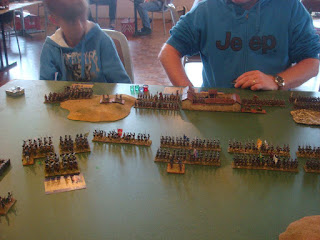 Hi Everyone
I played an introductory game of Maurice last Sunday at the monthly League of Ancients meeting.
My opponents were Darren and his son Declan (I hope I've spelt that correctly).
As this was an introduction to Maurice for them I simply slapped down some terrain and provided both armies.
Darren decided to defend and the objective was the town of Declansplatz.
Darren used my yet to be rebased Seven Years War Russians.
They had the National Advantages 'Steady Lads' and Maison du Roi.
Army ORBAT
1x Elite cavalry (Horse Guards)
2 x Trained Cavalry
1 x Elite Reg Infantry (Foot Guards)
5 x Trained Reg Infantry
4 x Artillery

National Advantages for my guys were 'Great Captain' and 'Artillery Academy'. The last was to prove totally useless to an army having the princely sum of 2 (count 'em), 2 guns.
BELOW: My Infantry lines advancing. The 1806 Prussians are a handsome army. 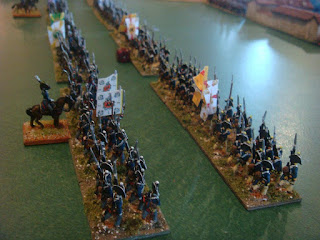 The terrain was pretty horrible from the perspective of the attacker. The objective sat neatly between a large hill on the enemies right flank and disordering terrain on the left. Darren garrisoned the objective with one battalion of infantry, an deployed his elite infantry on the right of the town with another battalion in front of them. He deployed his other 3 battalions to the left of the town supported by two artillery pieces. His other two guns were deployed on the hill to the right of the town together with his massed 3 regiments of cavalry.
With the enemy so well entrenched my usual plan of simply ignoring the objective and destroying the enemy army wasn't really on the cards.
I decided instead to try and seize the town. I pinned my hopes on somehow defeating his cavalry and his right flank forces and the capturing the town. On reflection a stupid pan, as he outmatched me in the quality of his horse, and his best infantry was also on the flank where
I intended to make my main effort.
As expected it ended in disaster. I suffered a bloody nose trying to take the town, and my cavalry were roughly handled by the enemy's superior cavalry.
Ultimately however it was all about introducing some fresh blood to 'Maurice' and so it was a successful two and a half hours of gaming.
All in all it was a fun game. I think Darren had fun, and young Declan commanded the Russian cavalry well, getting the better of the majority of combats 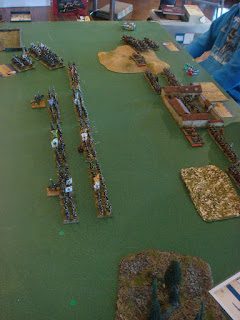 ABOVE: My brave infantry approach the objective.
BELOW: The Cavalry battle on my left flank. 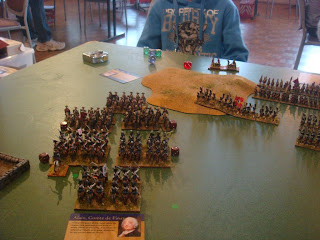 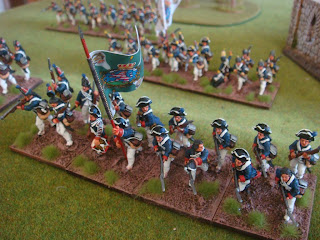 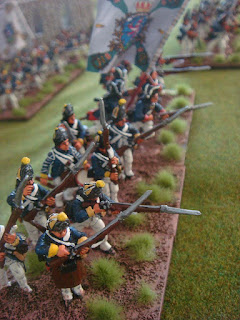 BELOW: The 'Hatmen' or Musketeers from Regt von Knyphausen 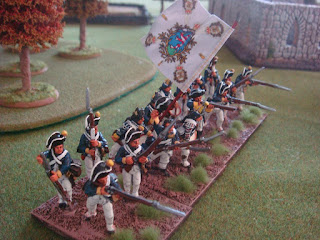 BELOW: All four Battalions ready for action. 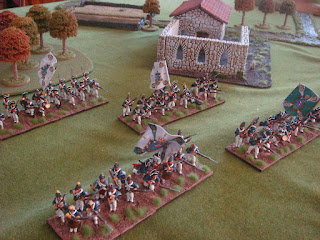 I will also use these guys for games using the excellent 'BRITISH GRENADIER' rules.
I've still got several battalions of PERRY METAL British to paint and recently ordered 3 boxes of the PLASTIC British Infantry and several packs of Americans, both Militia and Continentals.
I will certainly have my work cut out for me to get them all painted and based.
Feel free to leave any comments.
Here are some more photos for your viewing pleasure below. 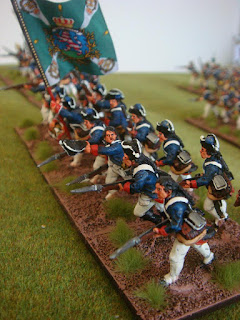 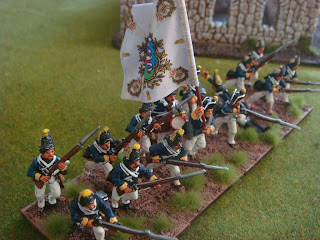 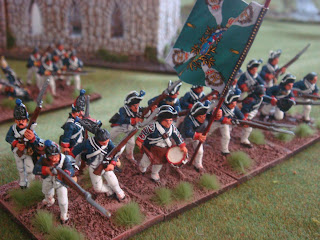 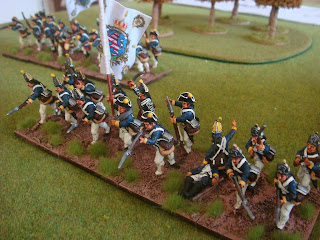 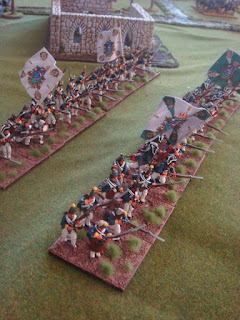