LANDWASTER '11. As viewed from BOTH sides of a battlefield

Hi All
Last year I played in LANDWASTER, a DBA tournament in Canberra. This was my 2nd tournament for the year and it had been my 2nd tournament in about the last 4 or 5 years.
In game 4 of the 6 rounds I was matched against my old mate Doug.
He posted a series of game reports from LANDWASTER, so I thought it would be noval to add my comment to the report he posted about our encounter in round 4.
I figured some of you might find it interesting to read about the battle as seen from both sides of the table.
My comments in BIG BLUE BOLD ITALICS.
Soooo over to Doug for the report:

GAME 4
At least I think this was game 4... Things were getting Hazy.. anyway - Scott (Trailape) is a top bloke to play against, hard but fair, and up for a laugh. As was customary by now.. the Waterway went down.. (groan). His army was a mix of Spear and Chariot cavalry led by Hector, looking splendid in his red chariot and shining armour. 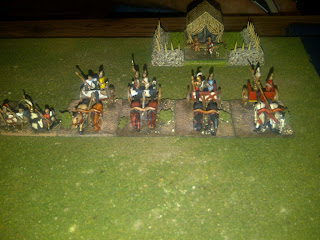 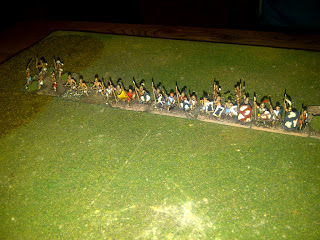 ABOVE: See those blokes with the bald heads second from the left in the front rank? Grrrrrrr....
I decided to mass my cavalry on my right and overwhelm the two cavalry in front of me then turn the line. Scott decided the best form of defence was attack and as I threw the column foward beside the waterway, he charged me with his two cavalry chariots - I had bow turning behind the column, and suddenly realised that the two Bw elements turning behind couldn't be pushed back and could cost me dearly!


This was my plan exactly. Initialy I was a tad aprehensive as Doug is a very experianced and canny player. His Bw was of concern to me on his right, so moving my Blade (Lukka Warriors) to that flank was a ploy to try and nulify them. Once I saw his 'blunder' with the column on his right I saw an opportunity to sieze the initiative on that flank and in turn roll up his flank.

LESSON ONE of DBA:

DBA is a excellent game for 'siezing' the opportunity, as usually one mistake can be fatal. With most systems, (such as DBM DBMM and FoG for example) you can bounce back from a single error. In DBA it's normally one mistake that can unravel the whole plan.

Luckily for me, the dice gods smiled on me, (oh.. how were they to turn!) and I threw off the first assault at 2-3, then moved out to get my own overlap and got a 4-1 to take out one of his chariots.

Unluckily for me! I really should have made more of this opportunity, but to then have potential success turn in to abject failure was quite disasterous. For the initial attack to fail was bad enough, but to then have the '4-1' result take a chariot out was just plain horrible!


By now I had elements pouring into the space on my right, behind and flanking the spear and blade that were left there as the second Trojan chariot succumbed. On my left I kept Hector and his other Chariot amused with Auxilia and Bw in a wood, supporting my remaining cavalry and LH that were facing off his Sp line in the centre.

Now both Chariots on my left were destroyed, and things looked very grim.
Lesson TWO of DBA:
Even when all seems lost, fight your way back into the game. If luck can be harsh (see Doug's comments on my failed Infantry assault below) she can also be forgiving. NEVER SAY DIE.


I had some extraordinary luck holding the Spear off (in one bound I had 5 combats and rolled 4 x 6 and a 2.. unfortunately the two was against that pesky Blade.. and the sixes weren't enough to do damage to supported spear). I was lucky not fleeing & sticking too much, as that would allow the Spear to contact me front and flank, but in the meantime, victory was turning to disaster on my right. I managed to kill the Sp with Cv in front and side at 3-3, but the remaining Blade (remember him?) was beating off all attacks.. and then to add insult to injury, got a 6-1 to kill a cavalry in front of him.

Clearly my redeployment was a stoke of genius. My Lukka Warriors obviously had a taste for horse flesh, (maybe they were Gauls).

I took a chance at a flank attack on his main spear line, which didn't come off at 3-3, and in return lost the cavalry attempting it. by this stage I was now two elements down, Scott was three down, and all I needed to do was kill this last Blade element, which was now completely isolated and surrounded by LH and Cv. For several bounds this went on, either sticking or throwing me back, I threw a bow in behind a spear hoping to recoil it into the bowmen with my cavalry, another fail... and lost the bow.. By now it was 3 elements each.

See notes on LESSON TWO. With the Lukka warriors fighting like Spartans in a narrow defile, I needed to now do a redeployment and get some support to them. Their luck wouldn't hold out for ever,...

I shot at his charioteers at 4-3.. several times, another fail, and still I couldn't kill the axemen as Hector drove his red chariot the width of the field to crash into the rear of my horsemen attacking the axemen, who again threw their opponents back, to die beneath the hooves of Hector's chariot horses. Game over, and I had gone down.

Hector to the rescue! By consistently using a pip each turn I was able to extract Hector and drive him across from the far flank to assist the Lukka Warriors. Hector insisted he saved them, by the lukka's assert that they had just been "having fun with the horsies".

A fun game, but one in which the dice played a disproportionate part. I was lucky to get away with surviving the first chariot charge, but after that the combat dice were not in my favour. Where I didn't need high dice, I was getting them as in the centre vs his spear, and yet time and again, needing to roll 3 or higher to get that last element I just couldn't do it.


Just when you need a high roll, you can be sure you have at least a 50% chance of getting a low one.


Scott's Blades should be rewarded with dancing boys, gold ornaments and some clothes. But yet again, I was left thinking that my troops didn't have enough punch to finish an enemy off when I felt he should have been on the ropes.

My lads are Trojans,.... not Greeks! Dancing Girls and a nice Horse steak was reward enough.
You can find all reports from all 6 rounds at Doug's BLOG: A LEAD ODYSSEY
Posted by Trailape at 1:34 AM 2 comments: