Now for something out of left field,.. 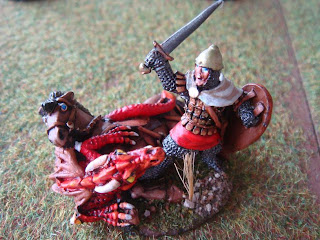 ABOVE: "GET YOUR OWN BLOODY HORSE HOT STUFF"!
Hi All
Now these pictures probably don't really belong on this Blog, but "Hey", there are some nice miniatures here.
First is Saint George and his epic struggle with the Dragon. I painted this model about 5 years ago I think. I bothed the Saint's eyes, but other than that he's OK I guess. 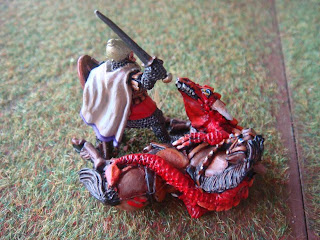 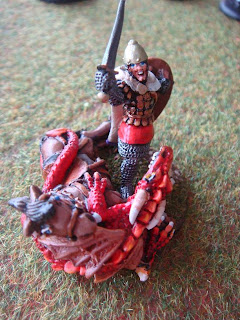 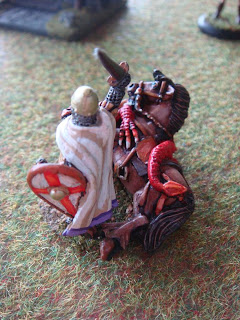 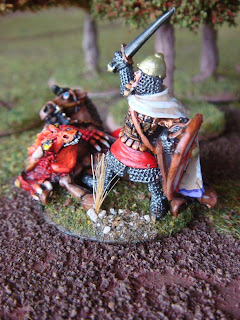 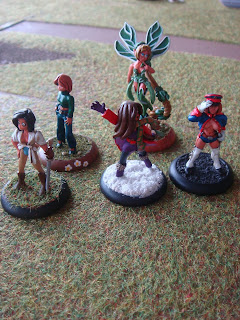 ABOVE: Raechel's Girls!
Next are some photos of some SHADOWFORGE Manga Girls my beautiful wife Raechel painted. What's so annoying is she picked up a brush about 6 years ago and knocked these out straight away. There she is, never painted before and she paints these.
I've been painting for about 33 years and I still can't paint this good.
Makes me want to punch her,...
BELOW: "TAXI"! 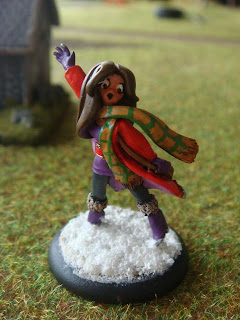 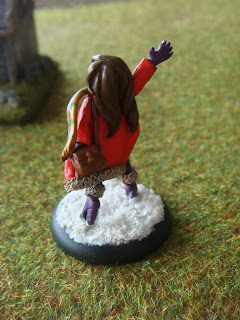 Below:
A figure she call's "RAECHEL" ('cause she look a little like her) 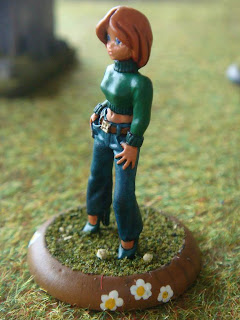 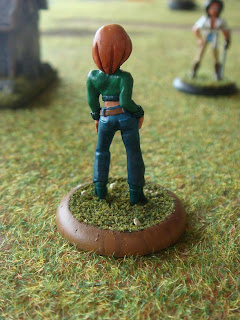 Finally.
Below is a Figure I painted whilst Raechel was a Staff Cadet. 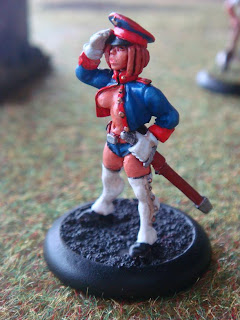 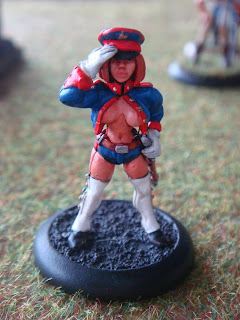 Every now and then Raech paints up a few miniatures for me. Normally 'character' or 'Command' miniatures.
Bless her,...
Cheers!
Posted by Trailape at 2:30 AM 7 comments:

One Can Never Have Too Much (GERMAN!) ARTILLERY! 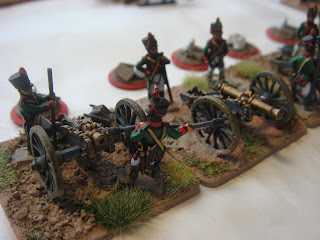 ABOVE: Saxon Horse Artillery!
Hi All
Another quick post, (WOW, two in one afternoon)!
Here is some pictures of some Saxon, Bavarian and Westphalian artillery recently painted for me by my buddy Danl (of GUNNERS WARGAMING fame). I've based them for LASALLE! Miniatures are from the AB MINIATURES stable and obtained from Eureka Miniatures.
BELOW: Bavarian Foot and Horse Gunners and their "Dogs Of War"! 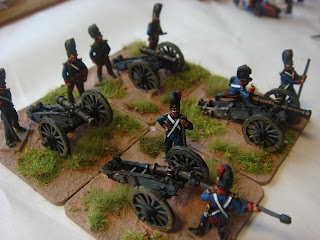 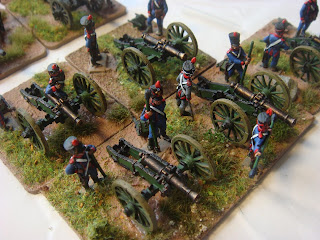 Being a 'Gunner' myself, I just love the Guns!
Cheers & MERRY CHRISTMAS!
Trailape OUT!
Posted by Trailape at 1:11 AM 3 comments:

Through The Mud and The Blood: WW1 Germans in 15mm 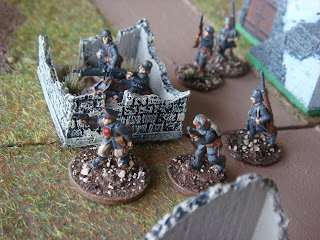 ABOVE: Some of my recently painted "BLUE MOON MINIATURES" WW1 Germans. A "Big Man (German Officer) and a HMG.
Hi All
Just a quick post to share some pictures of some recently purchased BLUE MOON Miniatures. I bought them from OLD GLORY in the US.
Long story short: My mate Stan and I decided to dabble in WW1, but what rules and scale?
We settled on TOO FAT LARDIES: "Throught The Mud and The Blood" rules, (as we both thought SHARP PRACTICE played really well, and I'm a big fan of their WW2 set, "I AIN'T BEEN SHOT MUM").
Next we settled on 15mm, as we both had plenty of terrain in that scale. Last choice to make was on figures.
With the release of BLUE MOON's excellent WW1 ramge, and the massive 40% discount from OLD GLORY it was a 'NO BRAINER'!
The added bonus is they are so easy to paint. Simply spray with "German Field Grey" (a Tamiya paint), touch up with a bit of flesh, green, brown and khaki. Next dip and spray with a 'anti-shine' varnish, flock and you're done.
I based the figs on old 1 cent pieces for the ordinary soldiers, and 2 cent pieces for the 'Big Men', (NCOs and Officers).
Though not spectacular results, I did get a Platoon of Germans on the table in record time!
BELOW: Jerries clear a town somewhere in Flanders,.. 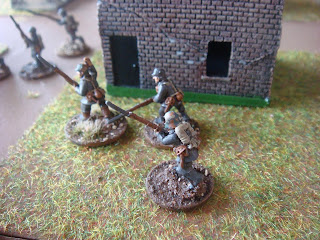 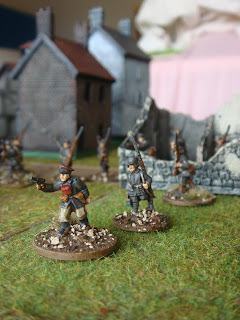 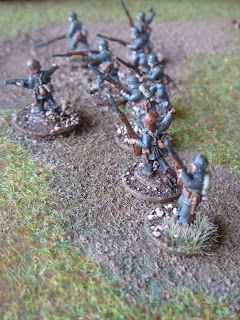 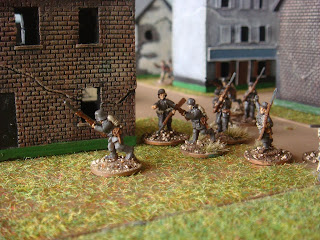 BELOW: Some of the BLUE MOON 15mm Germans base coated and based on old coins I had lying about.
I've included the pictures so you can see how nice these miniatures are. The Tanks are really nice, and I'll post pictures of some painted "LAND SHIPS" soon. 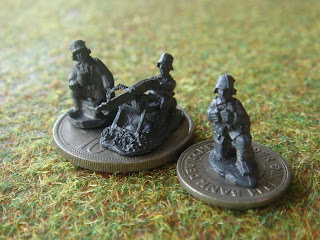 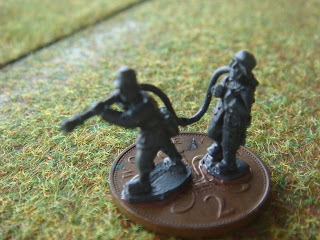 BELOW: An undercoated "BIG MAN" on a Aussie 2 Cent piece. What deeds of valour will he perform, (once painted)? 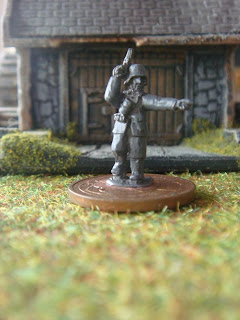