Hi
Here I've posted the pictures of my French Imperial Guard 1812.
Most were painted be MCM Painting Service, with the Middle Guard painted by FERNANDO ENTERPRISE Painting Service, and some of the Young Guard which were painted by Reinforcments By Post.
Almost all the figures are AB Miniatures, (which I purchased from Eureka Miniatures). The only exceptions being the "Imperial Staff", which are Fantassin Miniatures that I purchased from SCALE CREEP in the USA.
Now on with the show!
First we have the Emperor Himself, with his Staff gathered around him. Berthier is busy writting orders whilst Napoleon contemplates the campaigns progress with a foot resting on a drum. The next picture shows the Corps Of drums and the Drum Major resting between "Gigs" 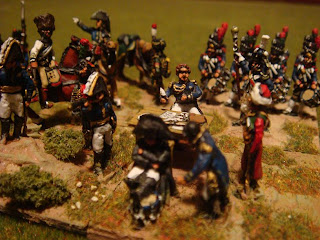 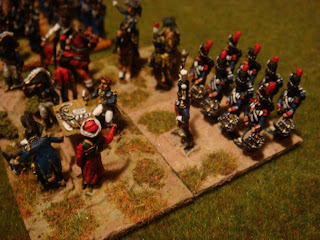 The next two pictures shows the Old Guard Grenadiers and Chassuers. The "Grumblers" in Greatcoats were painted by Dragon Painting Service and purchased via EBAY. (I might yet replace them with some more Old Guard in "Parade" dress,....). 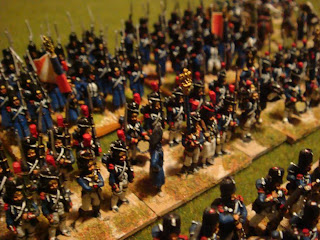 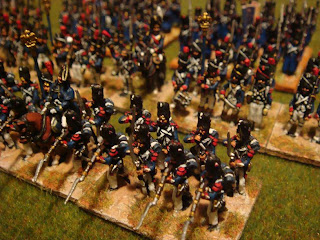 Here we see Marshal Ney, "Bravest Of The Brave"! 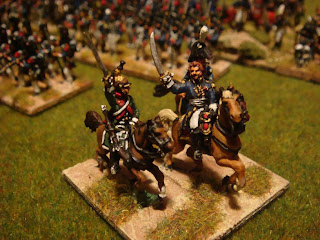 Below we have the Middle Guard; Fusilier Chassuers and Fusilier Grenadiers, (painted by FE to a "Collector" Standard). I might replace these with the same figures, but painted to a "Showcase" standard 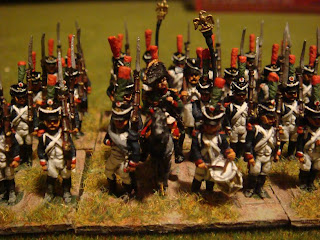 Now for the Cavalry or the Guard! 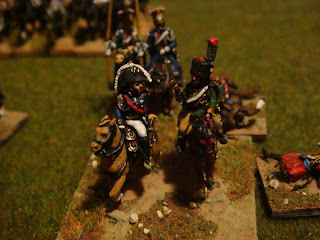 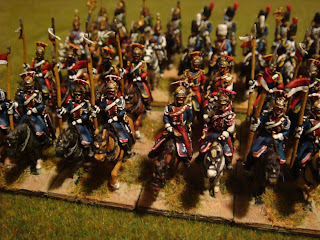 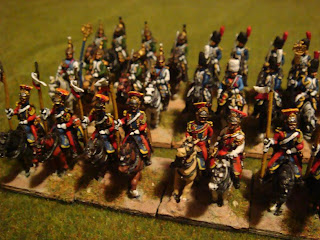 The Grenadiers A Cheval and Empress Dragoons: 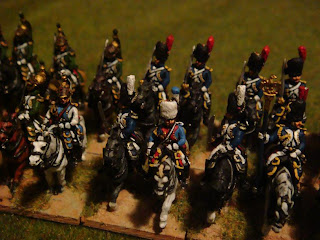 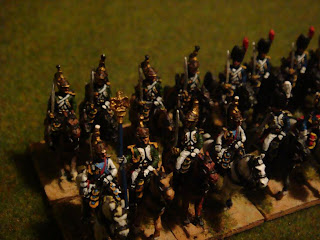 Here whe have the Chasuers A Cheval and Marmalukes Of the Guard: 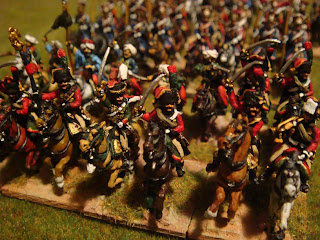 Of course we need the Guns! The Horse and Foot Artillery of the Guard Imperial! 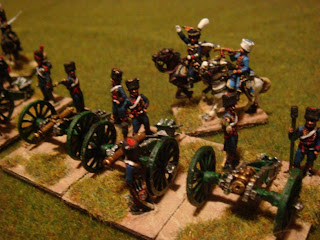 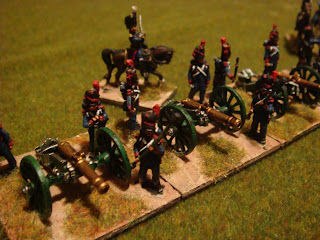 And finally we have the Young Guard: (The Young Guard in the Background are the RBP figs, which are very nice): 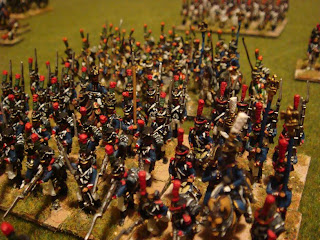 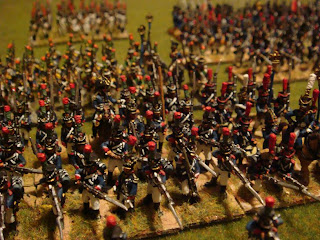 I'll post pictures of the rest of the army as soon as I can find the time.
Cheers!
Posted by Trailape at 4:42 AM 5 comments: 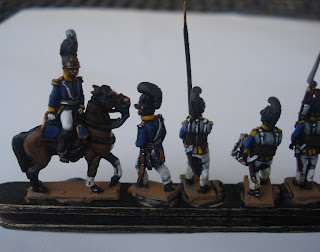 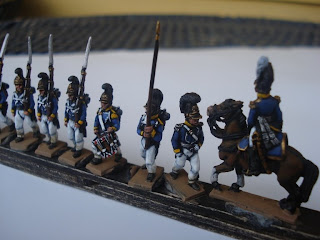 Hi All
I recently made contact with an old Army Mate of mine. I had not heard from him in about 10 or so years. We had served in the same Artillery Regiment together. Dan is his name.
If I remember correctly I think it was my mate Dal and myself that introduced Dan to historical wargames, (but i could be wrong). One thing I'm not wrong about was how good a painter he turned out to be. A real natural!
We all know the type. You say to yourself, "I show this newbie my magnificently painted Byzantine army that I've been working on the last 12 months. He'll be impressed and inspire to do an army of his own. Sure, it won't be as good as mine, after all, I have 20-something years of painting experiance behind me,..."

A week later he trots out an army the same size that makes yours look like it was painted by a half blind brain damaged chimp using damp crayons. You just wanna punch him in the throat! 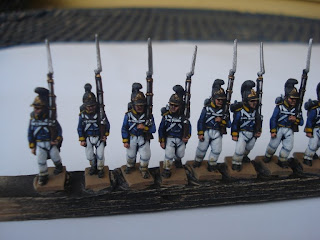 Anyway, Dan is a good guy, and has offered to paint up the Bavarian, Wurtemburg and Saxon elements of my Grand Army of 1812 / 13.
Here are some pictures of his work thus far: Top three pictures, 1st Wurtemburg Infantry Regiment, "Prince Paul". Below is Wurtemburg 1st Light Infantry Battalion and Bottom we have the Jager Regiment, "Konig" 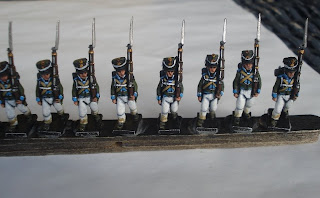 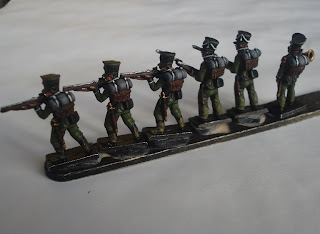 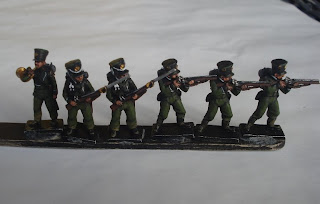 Now I just need to get some Wurtemberg flags!!
Soon I'll post some pictures of my Westphalians that I recently based and flocked.
BTW, if anyone's is interested, Dan used Games workshops (GW), "Dwarf Flesh" and GW Brown Ink to achieve the excellent skin tones on the figures above. He uses mainly Vallejo and GW paints. Dan has his own BLOG now, called Gunners Wargame . Check it out!
Cheers for now!
Posted by Trailape at 2:07 AM 4 comments: 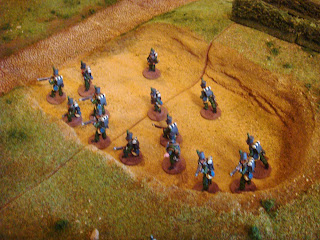 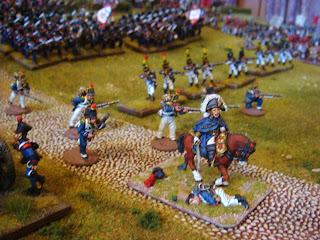 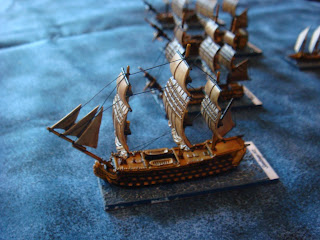 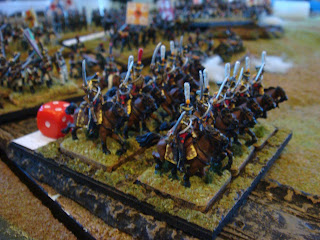 The next pictures (above) shows a Spanish 1st Rate SANTIAGO(?), and some Russian Hussars from the FPGA game. Below we have an out of focus shot of the entire 28mm Napoleonic game. 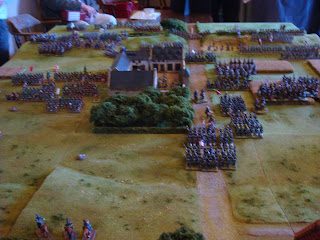 Posted by Trailape at 2:37 AM No comments: