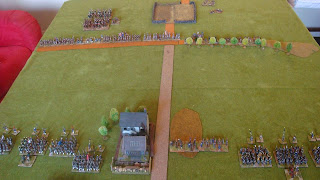 Hi All
Long time between blogs, but finally got something to share. Last week a mate of mine and I played a scenario straight out of the Lasalle rule book: "FINAL PUSH AT LA HAIE SAINTE". Obviously the scenario is based on the closing moments of the Battle of Waterloo. Unfortunatly for me, my British are based on the Peninsular Campaign, NOT The 100 Days. Consequently Mark and I fought "The Final Push at La Santa Haya".
The ORBATs were as follows:
The Brit OOB was:
1 x Battalion 95th Rifles
2 x "English" Battalions (32nd Foot and 52nd "Light")
2 x KGL Battalions
2 x Dragoons (should be KGL Lt Dragoons, but we used Heavies)
1 x Med RA Battery (should have been Rockets, but I only have Guns)
FRENCH OOB was:
4 x Line Battalions of the 8th Ligne Regt
3 x Light Battalions of the 13th Legere Regt
1 x MED Horse Battery
2 x Cuirassiers (large). One Regt was a Carabinier Regt. The Scenario has these as NORMAL sized units. For some reason I made them LARGE,.... (oooops) 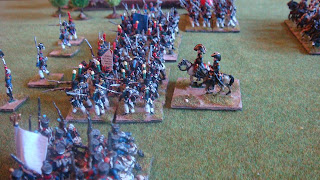 ABOVE: The French 8th Ligne Battalions Advance
BELOW:The French 13th Legere Battalions step off, with the Horse Artillery deploying in the background. 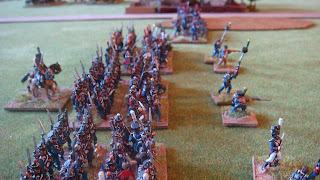 BELOW: The KGL Battalions deploy behind the sunken road, with the Royal Artillery Battery between the two Infantry unis. Behind them are the two Dragoon Regiments. 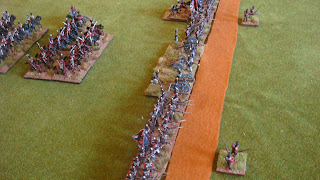 BELOW: The 95th Rifles deployed in the tree lined sunken road. 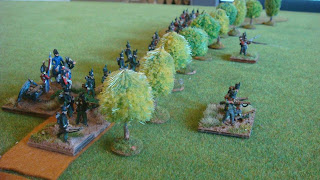 BELOW: A British 52nd Light Infantry Battalion deployed beside the lads from the 95th. 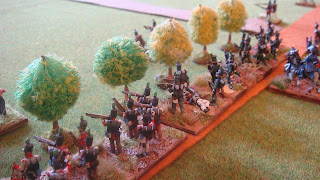 BELOW: The KGL and RA Battery await the advancing French Ligne Battalions. 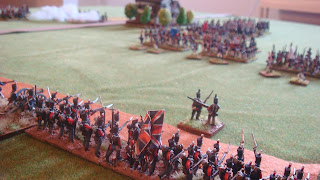 BELOW: The French Horse Artillery Open Fire on the British left flank. Their fire was rather telling all game! BON! Most of their fire fell on the 32nd Foot, but some roundshot bounced through onto the Dragoons redeploying. 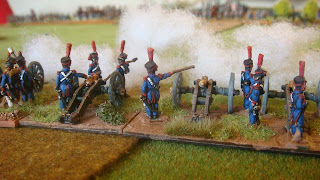 BELOW: Mark moves one of his Dragoon Regiments to support his left flank. The fact they were out of command for much of the game hampered their ability to rally off disruption they suffered from bounce through fire sustained as the carried out this redeployment from the British Right Flank to their Left flank. Notice the DISR markers on the 32nd,... 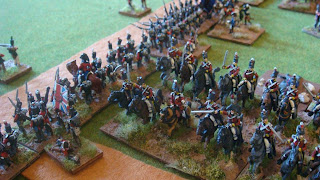 BELOW: The British CinC positioned behind the 95th. "I say, those Frog guns are doing some harm,.."! 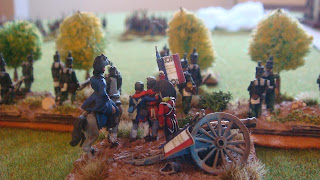 BELOW: The KGL Battalions and RA Battery let loose on the French Line Battalions. The RA Battery fired poorly, (must have been the gauling fire from the French skirmish screen,..). The "German" Infanrty did some execution however. 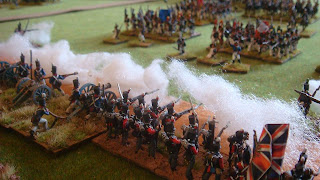 BELOW: Volley's smash into the flower of French youth, as seen from the French side. 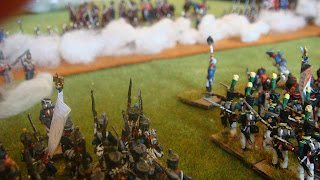 BELOW: The far right KGL Battalion CHARGES one of the French Ligne Battalions. The Germans were repelled, but rallied and fired a devastating volley that broke the Frogs. 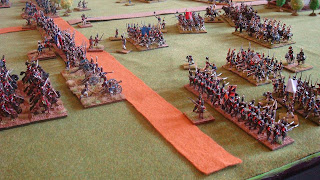 BELOW: The decisive moment of the game. The Dragoons CHARGE the 1st Battalion of the French 8th Ligne Regt. The Battalion formed square,and the nearby Carabiniers counter-charged the Dragoons! Thanks to some spectacular dice rolling the French heavies broke the British Dragoons! 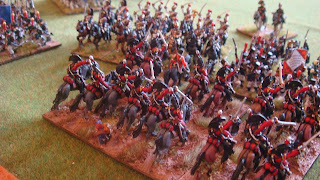 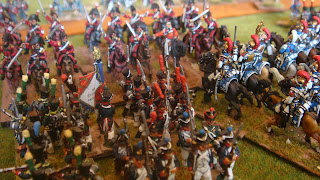 BELOW: As the Cavalry clash, the infantry blaze away! 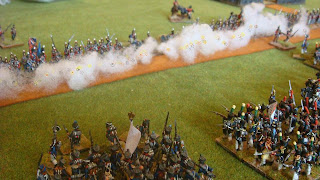 BELOW: The 1st Battalion (with Tricolour and Eagle), 8th Ligne form Line from Square as the Carabiniers head for the Brit Artillery!. The remnants of the far left French battalion are seen staggering about,... ("sob") 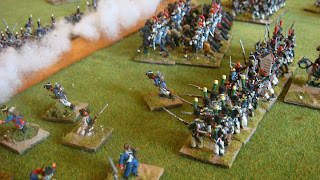 BELOW: As seen from above. 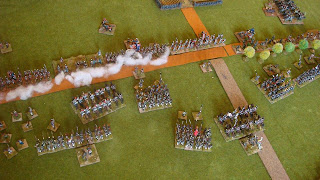 BELOW: The Carabiniers crash over the RA Battery. 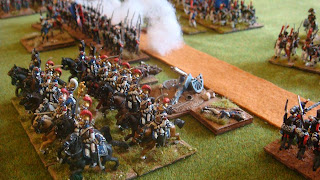 BELOW: The French Cuirassiers threaten the British 32nd Foot (now in Square) as the KGL Battalion on thier right try and hold off two battalions from the 8th Ligne. 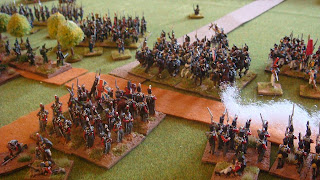 BELOW: The 95th facing the French "lights". 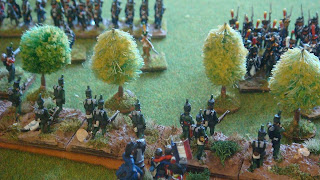 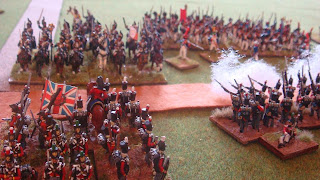 ABOVE: Last photo from the game. 32nd in Square. Not long after the two French Battalions swept away the KGL battalion. Game over for the Brits who failed their moral test.
Game time: 2.5 hours.
Result: Lots of Fun!
Feel free to leave a comment!
Cheers.
Posted by Trailape at 12:26 AM 17 comments: