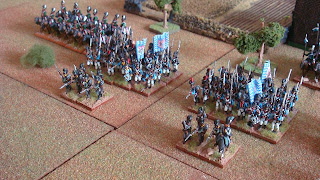 Hi All
Here are some more pictures of my Bavarians.
I took these pictures to offer to Sam Mustaffa for his LASALLE Bavarian Army List. I was lucky enough to have one photo used. That one is on the Lasalle / HONOUR web site. Below are the photos that didn't make the cut. All were painted by my mate DAN DUNBAR except for the cavarly noted below.
Flags are free downloads from WARFLAG. 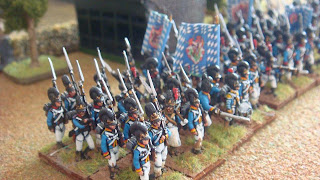 Above and Below: Bavarian Infantry. 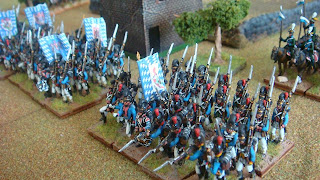 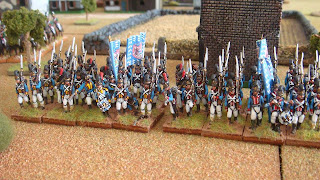 Above and Below: Yet More Bavarian Infantry 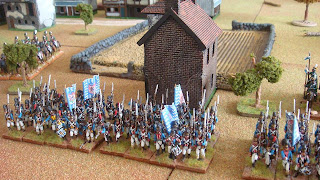 BELOW: Bavarian Cavalry. These guys were painted by DRAGON PAINTING SERVICE. 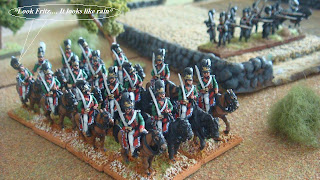 BELOW:
My Bavarian Light Infantry 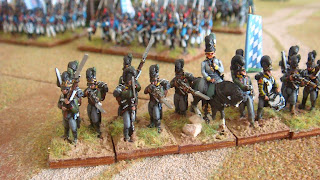 All are AB and FANTASSIN 18mm miniatures. Please feel free to leave a comment.
UBIQUE!
Posted by Trailape at 5:05 AM 14 comments: 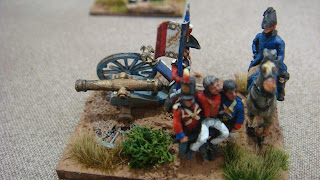 ABOVE: My Divisional Commander Base. A damaged 9 pounder with a Captured "Eagle" draped over a wheel. An officer presents a captured standard, (Dragoon I suspect). a wounded officer is carried off by a Gunner and infantryman; "All in a day's work Sir"!

Hi All
Here are some pictures from the LASALLE Demo game that I participated in at CANCON 2010, (CANCON: The Canberra Games Convetion).
My daughter Hayley and I played a game of Lasalle against some friends, (Dave and Zels). Hayley and I trotted out our Penisular British, whilst David and Zels attacked with a French Division. We picked a British Dragoons Brigade (BDE) as our optional Brigade, (and they arrived in the nick of time)!
BELOW: My BDE of an Elite Infantry Battalion (King's German Legion), and a regular battalion. You can see the skirmish bases / markers out front, (5/60th Foot and 95th Rifles) 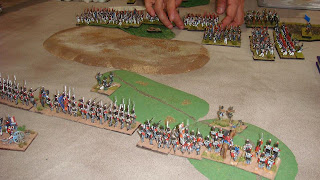 BELOW: The French close in,.. 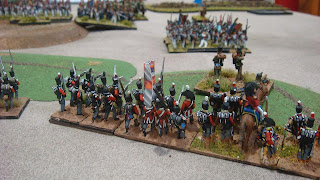 BELOW: The KGL await the French as they crest the hill. 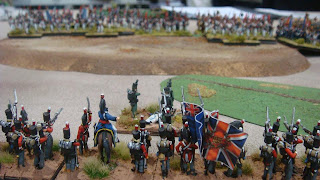 BELOW: The Dragoons charge to the rescue! 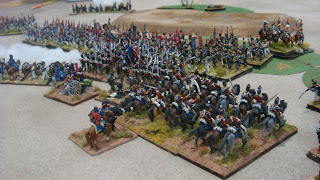 BELOW: "I say, where did those Frenchies go,...?" The Dragoons roll over one of the Veteran French Battalion 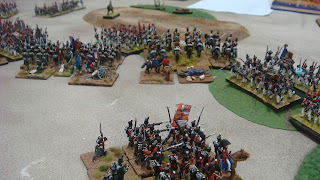 BELOW: The KGL battalion holds on for grim life after holding off two French Battalions. A Brit Dragoon Regt disptached one,... 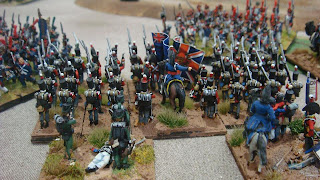 Most figures ar AB Miniatures, with some FANTASSIN Miniatures thrown in.
The Game was great fun. The highlight was the fist full of 5s and 6s Hayley seem to consistantly throw during the Fire Fights with the French attacking her,...
The game seem to get a fair share of passing interest. The EUREKA MINIATURES trade stall sold out all their coppies of LASALLE over the 3 days.
Cheers
Posted by Trailape at 4:27 AM No comments: