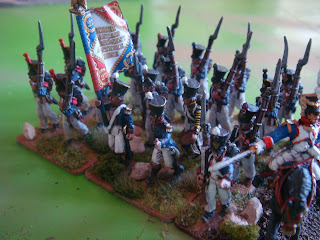 Hi All
It's been a long time since my last entry on the Blog; (work keeps getting in the way of my social life). Anyhooo, I thought I'd share with you some pictures of some OLD GLORY 2ND EDITION (OG 2nd Ed) Pre-painted miniatures I recently aquired a few months back, (before my car blew up)!
Well, they aren't ALL OG, the two mounted officers are the very nice VICTRIX French Mounted Colonels. I painted the two mounted Colonels myself.
Now Old Glory (OG) have a reputation of producing figures that are either very good, or very bad. Their 2nd Edition figures though are, in my opinion very nice. I don't think they are as good as PERRY's, but for the price they are pretty good at "bulking" out your line.
I think they were sculpted by the same chap who does the very nice SASH AND SABER 28mm figures.
The Pre-painted figures also are rather good value for money, with 20 painted "center" company figures setting you back $70.00 USD, or 8 "flank" company or "Command" figures costing $33.50 USD. Now they are not painted to what I'd call SHOWCASE or MUSEUM standard, but certainly a good to very good WARGAMER's standard. Bottom line was I happy for what I paid? YES.
Will I buy more? Hmmmm,... well I hear REINFORCEMENTS BY POST may well be doing a similar deal with the OG 2nd Ed figs, so when I see what they look like I'll spend my hard earned on what ones take my fancy,...
BELOW: French 36th Line Regt with a Mounted VICTRIX Colonel.
Notice the beautiful VICTRIX Colour (flag). It's as good as any flag you'll pay a couple of dollars for and you get about 8 of them FREE with a box of VICTRIX Plastic 28mm French infantry!!! 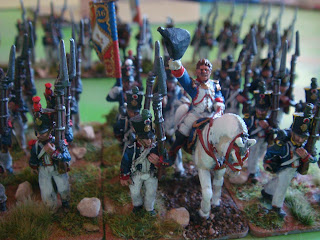 BELOW: The Eagle bearer, drummer and Officer of the 36th Line Regt. A much better look at the VICTRIX flag in this picture. 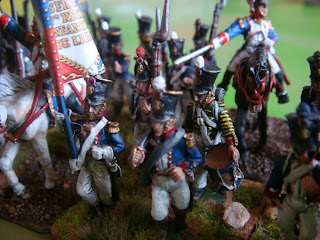 BELOW: The Grenadier Company of the 36th Line. I did repaint the Pom Poms and wings on the Grenadiers, (as the red was to subdued for my liking). 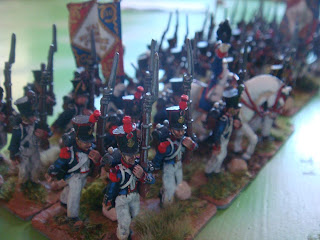 BELOW: a closer look at the Mounted Colonel of the 36th. The photo has made the horse look a lot "whiter" than it is, and has blured / blended the shading. This miniature looks a bit nicer in the flesh than this photo actually shows, (honestly). 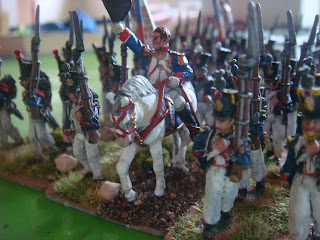 BELOW: The Mounted Colonel and his charges of the 27th Line! The VICTRIX metals are beautiful miniatures. I'd rate them the equal of the PERRY's, (and that's saying something)! 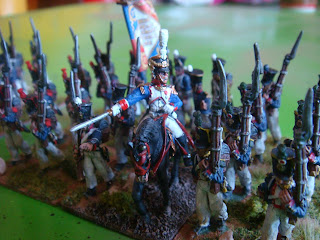 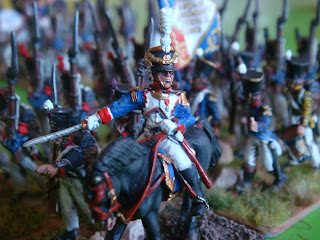 BELOW: the 27th and 36th Line Regiments advance! 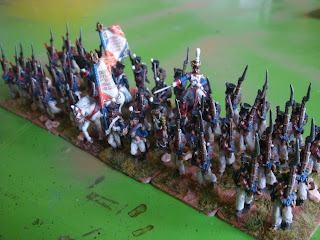 (BELOW) Old Glory 2ndEd Pre-painted figures as viewed from behind: 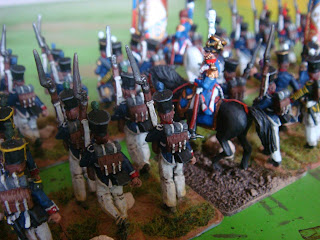 I based the figures on VICTRIX 40mm square bases.
Feel free to leave a comment!
Cheers
Trailape
Posted by Trailape at 1:02 AM 5 comments: