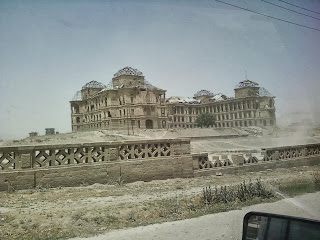 ABOVE: The 'King's Palace' at Kabul, Afghanistan. It'll be nice once it's finished I suspect
Hi Guys
Some of you may have noticed I'd not posted to my blog between June and November. It would have been only fair if someone had assumed I've been Missing In Action!
Well the reason is pretty simple.
I as diagnosed with Post Traumatic Stress Disorder earlier this year. One of the symptoms is a lack of interest in things that use to give you pleasure, (my hobby being a casualty). 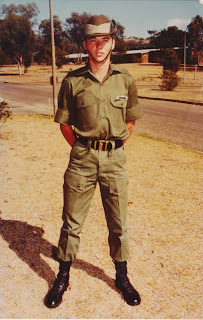 I enlisted in 1982 as a 17yr old and was allocated to the Royal Regiment of Australian Artillery. Moved through the enlisted ranks rather quickly being a Sergeant within six years and being posted to what was at the time the Army's only Medium Artillery Battery (103rd MDM BTY) equipped with 5.5inch Guns and then M198 155mm Gun Howitzers. Soon after I was posted to our only Airborne Battery, 'A' FD Battery (PARA).

BELOW: Exercise Far Canopy or Diamond Dollar in the late 80s. I can't remember which. 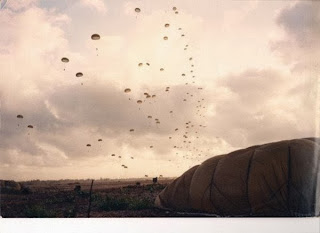 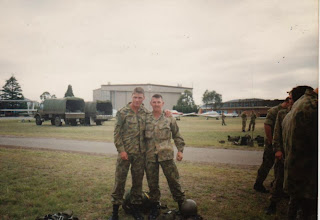 ABOVE: As a young Sergeant awaiting a jump with my mates.
﻿
I served with the British Army on The Rhine in 1990 on exchange. Deployed to the Sinai in 1999 attached to the Multinational Force and Observers (MFO). I deployed on Operation Relex II in 2004 doing border security work and took up a position later that year assisting in the training of US Marines who were deploying to Iraq. I deployed to Afghanistan in 2011 as a training mentor for 6 months working closely with the Afghan National Army (ANA). I was diagnosed with PTSD in early 2013. For me it wasn't one single incident but rather just the culmination of 31 years of soldiering. It wasn't just what I experienced in the Middle East and Afghanistan but in training. Unfortunately I had mates injured and killed in training accidents. It all came to a head after Afghanistan. My tolerance levels were shot to shreds. I was snapping peoples heads off at work on occasions and wasn't the happy go lucky easy going young lad that had joined up as a keen as mustard 17 year old who had wanted to be a soldier since he was five. My sister died in July 2008, and then my brother died 3 months later. Six months after that, my mother died and yet I was emotionally numb to it all. The combination of my experiences on deployment and in training together with the ridiculous personal standards that I had maintained as a professional soldier had taken their toll. Never being late. Never having as much as a bit of lint on my uniform. Everything having its place and making sure everything was in it place. Always placing the needs of my soldiers and superiors ahead of my own (or my family) for so long became unbearable. Oddly enough however I didn't notice the deterioration in myself. I was a Warrant Officer Class One by 2008. I was posted as Regimental Sergeant Major (RSM) of an artillery regiment and then RSM of my Regimental School in 2010. ABOVE: Laying a M777 as RSM School of Artillery. CO firing, (as is his prerogative)For any Artilleryman this would be considered the principal of their career, and certainly not one that would be attained by a 'weak' individual. My wife noticed a change in my demeanour when I returned from Afghanistan. I'd always been a difficult man to live with, demanding high standards from all around me including my family but upon my return I now took those standards to ridiculous heights. My wife and children were reduced to walking on eggshells. My four year old daughter Mathilda in particular was weary of me. My two year old son, (who was only 10 days old when I deployed to Afghanistan) stayed close to his mum. What I considered important, even life saving, was considered by my family as simply irrational. I was reduced to only 3 hours sleep a night from the time I returned from Afghanistan, which after 18months had done nothing to help with my attitude.
My 'tolerance' levels had been shot to pieces and I wasn't suffering fools in the slightest.
Ultimately my unit doctor intervened and I was admitted to the repat hospital at Epping for 6 weeks and then placed on a 12 week outpatient PTSD program. In itself this was not an easy feat for me and was initially impossible to accept. I was a man who had only ever had approx three or four months off for sick leave over a 31 year career, and most of that was convalescing after knee surgeries. Being away from my place of work and those who depended upon me for such an extensive time was one of the hardest parts. I felt 'jack' at times and I refused to accept there was anything wrong with me and that it was all in my head. I was having my own personal struggle about it. Yet as much as I felt bad about not being at work, the thought of returning made me sick to the pit of my stomach. Luckily, I've had excellent support from my Commanding Officer and unit in general. Most critically I've had fantastic loving support from my wife and children. I'm a long way from better, but I'm getting there. 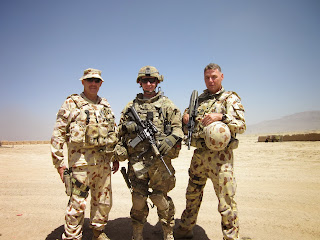 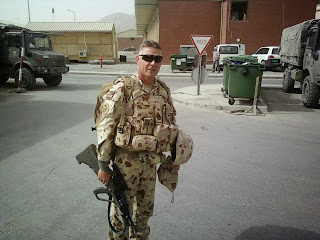 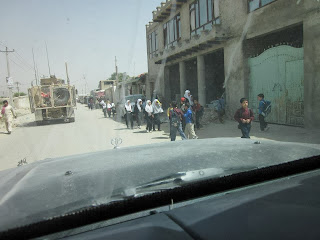 ABOVE: Why we fight. So little girls in Afghanistan can go to school. Its a good enough reason for me.
Posted by Trailape at 4:24 AM 23 comments: 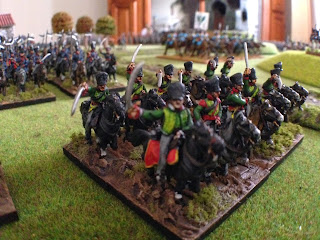 ABOVE:"HUZZAH"! Prussian Hussars to be sure, 2nd Silesian.
BELOW: The same Hussars, but from a different angle. 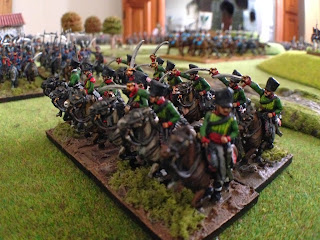 Hi Everyone
Recently I heard a new painting service was operating here in Australia, so always keen to support the local 'Wargaming' community I thought I should send some miniatures off to the new venture to be painted.
I came to know of EXPRESS MINIATURES via The Miniature Page (TMP). I sent Kurt a email and soon had five 12 figure Squadrons of Prussian 18mm AB Miniatures Prussian Cavalry on their way to him. I also sent of twenty BOLT ACTION 28mm World War Two Germans and twenty BOLT ACTION 28mm World War Two  US ARMY GIs to be assembled and painted. I also requested that they all be based and flocked so that essentially they were 'Ready to play' as soon as they arrived.
BELOW: Two Squadrons of Prussian Landwehr Cavalry, 1st Kurmark and 1st East Prussian 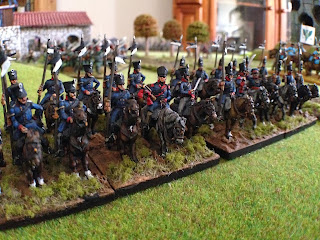 As a rule I rate Painting Services on four criteria. These being Painting (this includes assembly, basing and flocking if requested), Value For Money, Customer Service and Packaging.
So how did Express Miniature Fair?
PAINTING: The miniatures were well painted. Neat with subtle highlights and shading. I like my troops to have that 'On campaign' look about them, and Kurt asked me if I wanted my lads looking as if they were just off the parade ground or had been doing some hard marching.
I didn't need to provide uniform references, (which is very convenient). I was particularly please with the basing and flocking however I do like my base edges (I mean the very sides) to be clean and free from any marks. Some of the bases had brown marls on them, detracting from the otherwise 'neat' black edges.
Assembly of the 28mm plastic Bolt Action Germans and Americans was good. I won't say excellent as their were subtle issues to do with positioning of weapons and or hands that I as a professional soldier picked up on as 'odd'. I'm being highly critical it's fair to say. 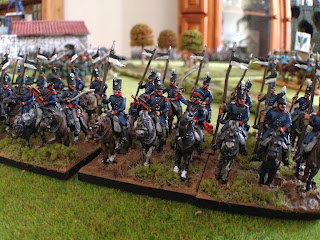 VALUE FOR MONEY: I would rate Kurt's painting somewhere between 'Collector' and 'Showcase' quality. For example he charges $6.00 for a mounted figure, ($6.50 for Hussars). Given the savings on not having to send the miniatures overseas the charges are pretty darn reasonable. All in all I'd suggest that Express Miniatures are reasonable to good value for money. Convenience is a big factor here as I live in Australia and posting miniatures overseas for painting can be expensive and stressful, (Will they arrive ok? Will they return ok?).

CUSTOMER SERVICE: Quite simply this was excellent. I was always kept informed in regards to progress, and provided photos to comment on. For example I was sent a photo of the BOLT ACTION GIs and I wasn't really happy with the colour of their trouser, (too dark). This was quickly addressed and a new photo was sent within 24 hours for my comment.
Kurt even returned the miniatures to me personally.
Consequently I cant comment on PACKAGING as like I said, they were hand delivered. 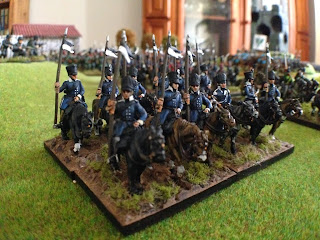 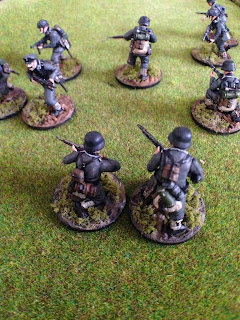 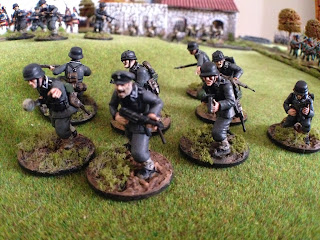 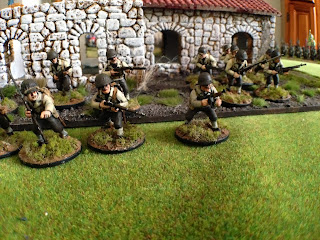 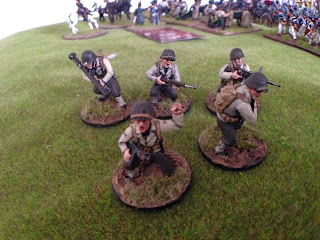 In summary I would recommend EXPRESS MINIATURES to anyone who wants their miniatures painted to a high standard for a reasonable price.
Cheers
Trailape Out! ﻿
Posted by Trailape at 7:10 PM 2 comments: 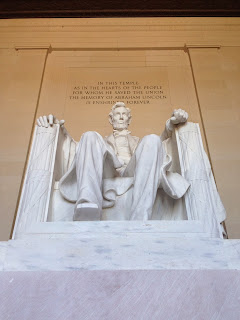 Yesterday marked the 150th anniversary of President Abraham Lincoln’s ‘Gettysburg Address’. Only recently I returned from a holiday in the US, and was fortunate enough to visit the battlefields of Antietam and Gettysburg
Given the date I thought it might be appropriate to share just a few photos of my visit to Gettysburg.

My beautiful wife Raechel accompanied me on my battlefield tours and I honestly thought it would be torture for her but much to my surprise she really seemed to enjoy the visits. So much so she got dressed up whilst at Gettysburg. Many thanks to the lovely ladies at the Gettysburg Emporium by the way.

To quote Raech:
To my dear friends at the Gettysburg Emporium thank you so much for such a lovely time on my recent visit to Gettysburg. When I entered your shop, I had in mind just to have a bit of a look, perhaps try on a dress or buy a bonnet, what I got instead was a warm, heart felt experience and pampering and some lovely life-long friends. Thank you and I can't wait to return to Gettysburg and visit with you once again some day xox
Anyway we had a fabulous three days at Gettysburg. The people were very friendly and we were blessed with fantastic weather.
I’d like to recommend that if you do visit Gettysburg a great way to see the battlefield is on horseback. Raech and rode along with a tour from Artillery Ridge.

The perspective of being on horseback was excellent, and our tour guide knew her business answering all the questions I threw her way.
The highlight for me however was having my photo taken in a Union Officer’s uniform with Raech dressed as a lady of the day with a camera that was over 150 years old. We now have ‘Tin Plate’ photos that will stay in the family for years to come. However the best part was actually seeing how the photos were produced and the photographer Rob Gibson was only too pleased to show us the entire process. 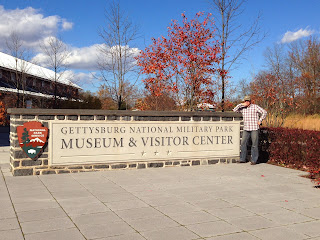 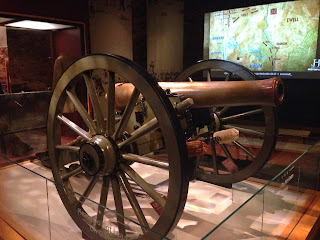 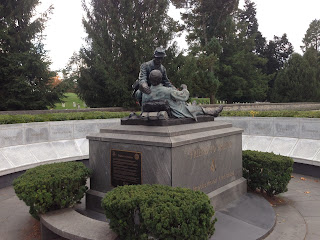 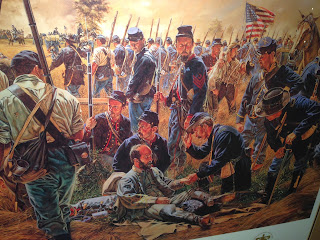 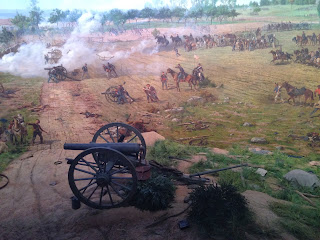 ABOVE: Just a small part of the Gettysburg Cyclorama. Just awesome!

BELOW: Raechel looking the part. She convinced me to get into a uniform, so being a 'Union Man' I selected that of a Federal Artillery Officer. 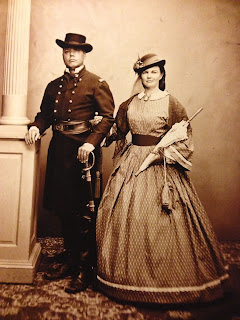