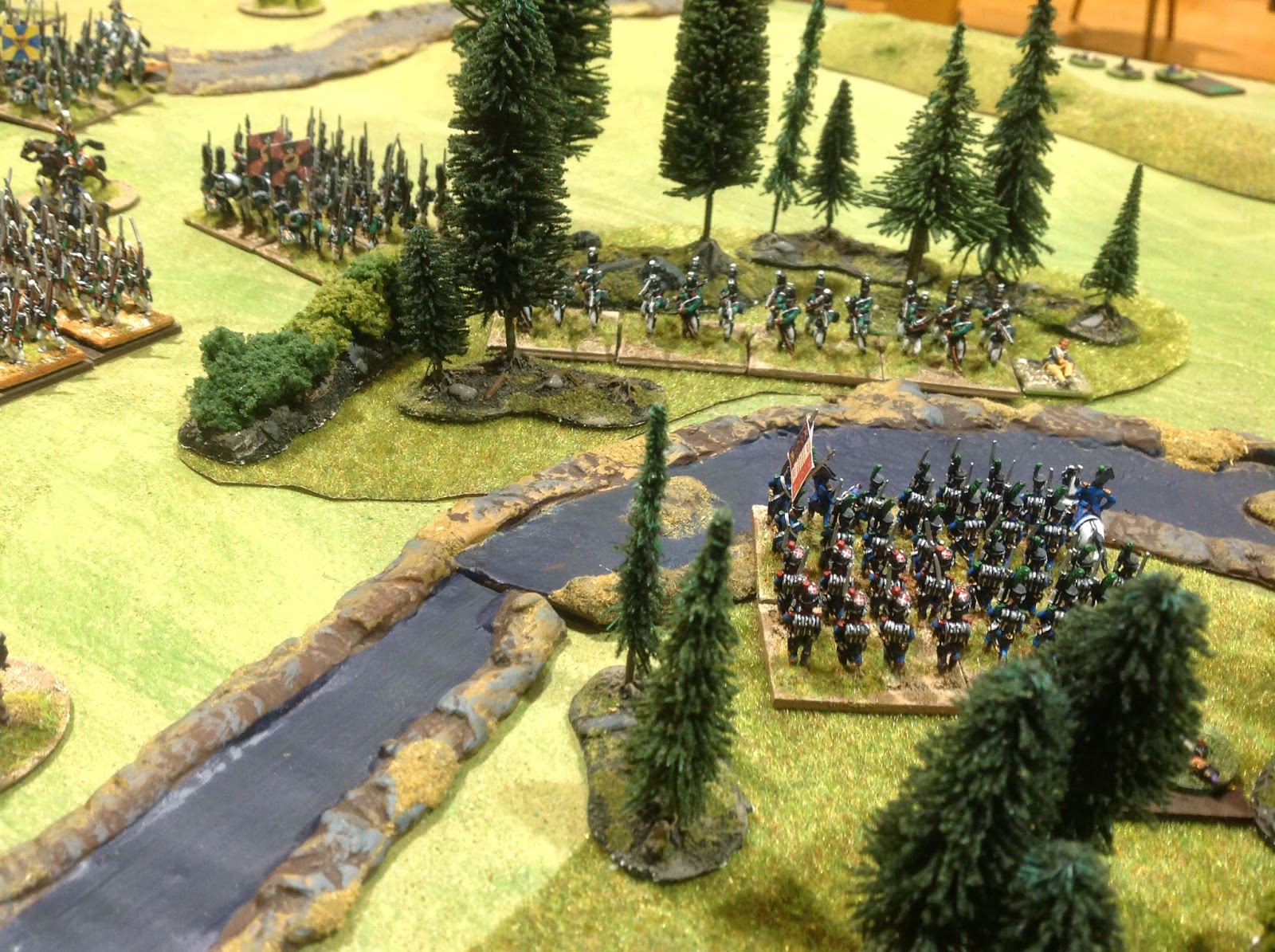 ABOVE: French Light infantry attempt to cross a stream in the face of Russian Jagers.
Hi Team
About a week ago I got together with my good mate Arnaud for a game of Field Of Glory, Napoleonic (FoG:N) at The League of Ancients (LoA) in Melbourne.
We were both keen to blow the cobwebs away and have a crack at these excellent rules that fall neatly into that gap between Battalion and Grand Tactical level rules where you manoeuvre 'Regiments' or Brigades within the scope of a Corps Commander.
It had been over a year since either of us had played and with a FoG:N tournament being hosted by the LoA in July we both wanted to get back into the swing of things.
We made a few mistakes with the rules but hey, that's why were wanted to play a test game.
We had both also forgotten what a cracking good game FoG:N is.﻿

Arnaud and I decided to play a 800 point per side battle. I opted for a Russian Advance Guard Corps of 1806 while Arnaud ran a French Infantry Corps of 1805.
I won't give a blow by blow AAR but suffice to say we both made plenty of mistakes with the rules. Fortunately there were plenty of LoA players who were more 'current' with the rules and helped out as needed.
As for the actual battle,... Arnaud planed to demonstrate in the centre and attack on the flanks. As we all know however what you demonstrate with needs to be sufficient to be of concern to the enemy.
As the French attacks on my flanks developed (actually the only real concern was on one flank, my right) I launched an assault of my own at the French centre. 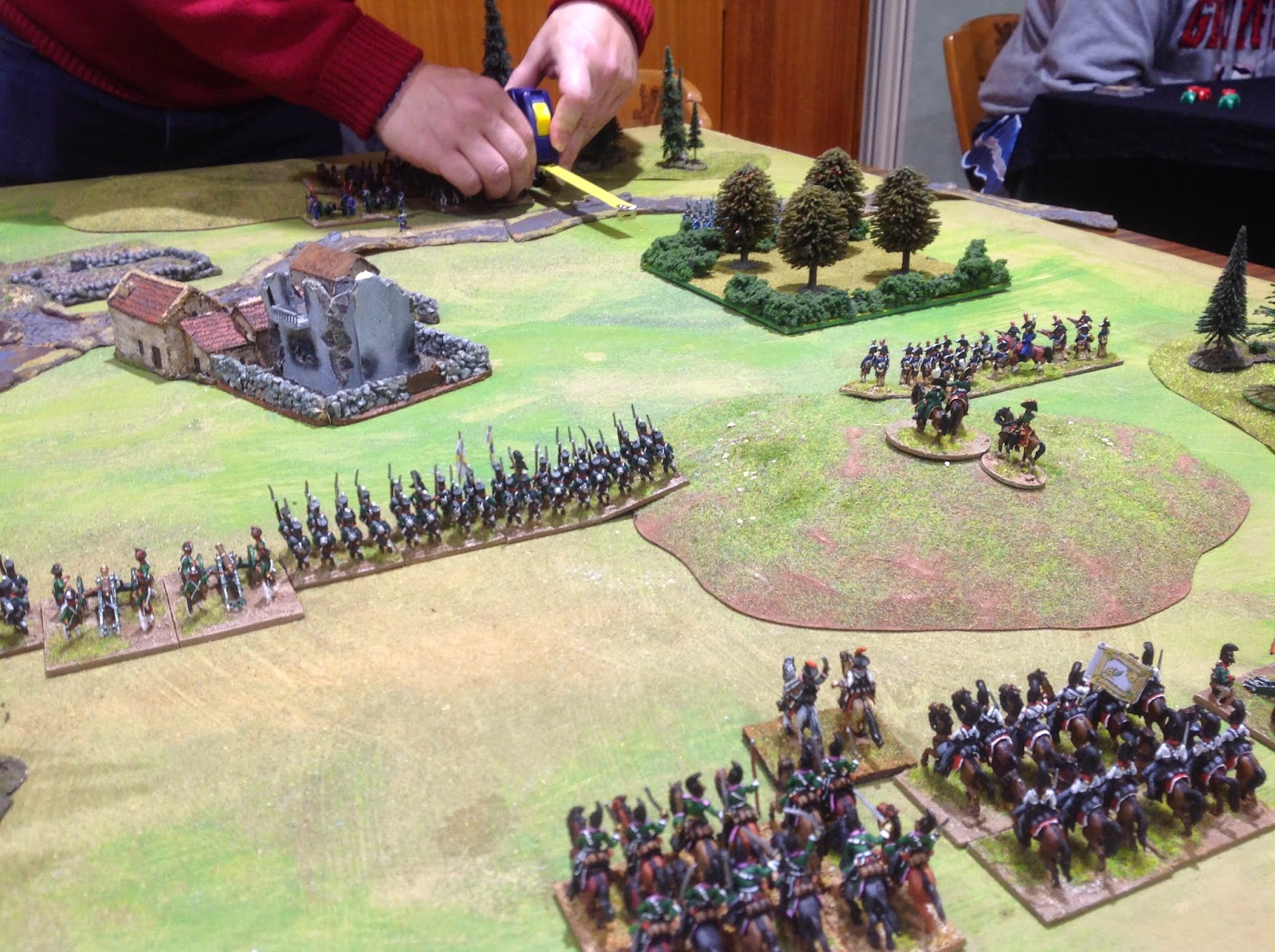 ABOVE and BELOW: The Russian Right (above) with the Cavalry Reserve of Dragoons and Cuirassiers and Horse Artillery and Centre (below) 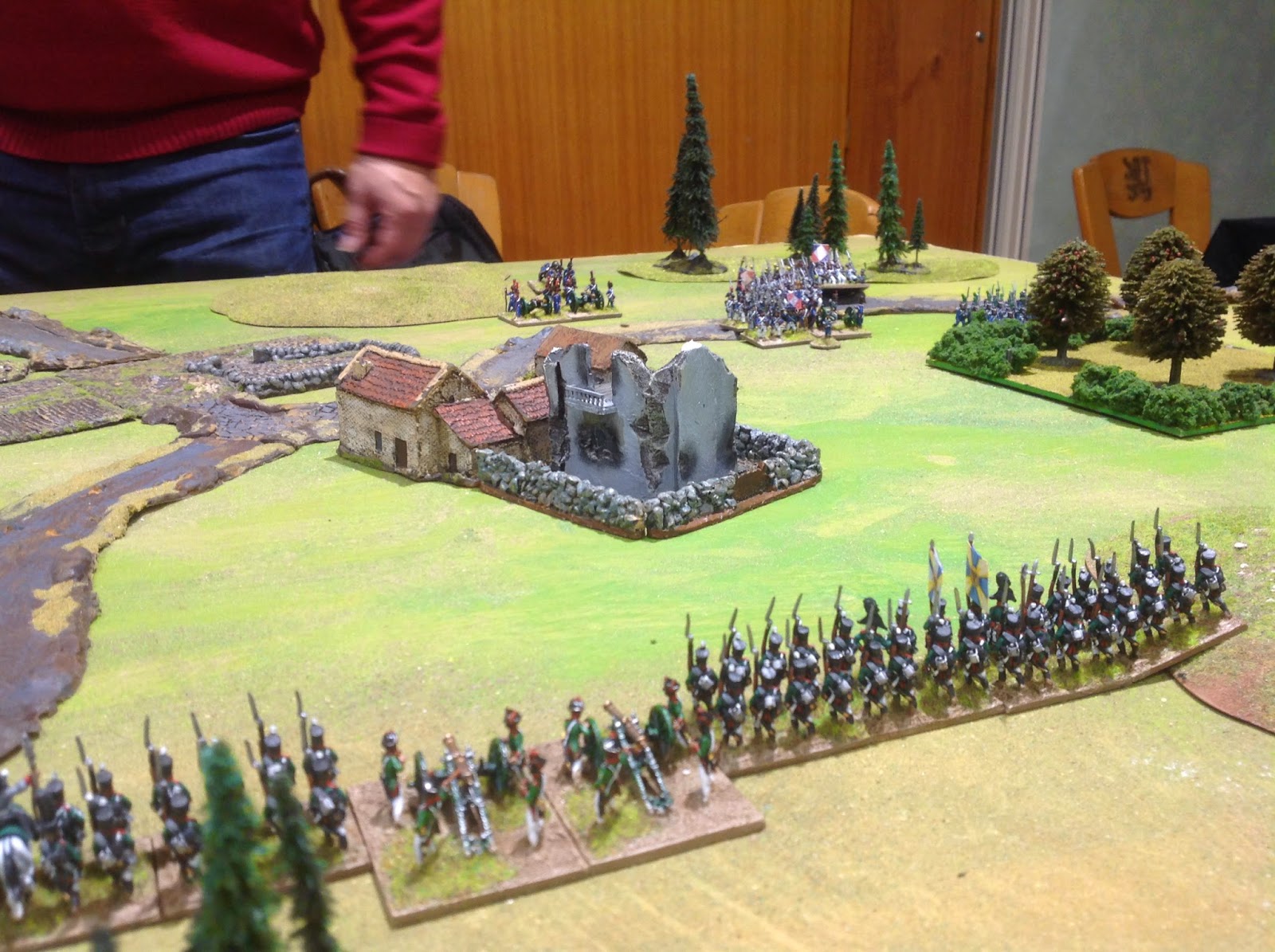 BELOW: The Russian left flank. Conscripts in 'Square Formation' with a Battery and Cossacks in support 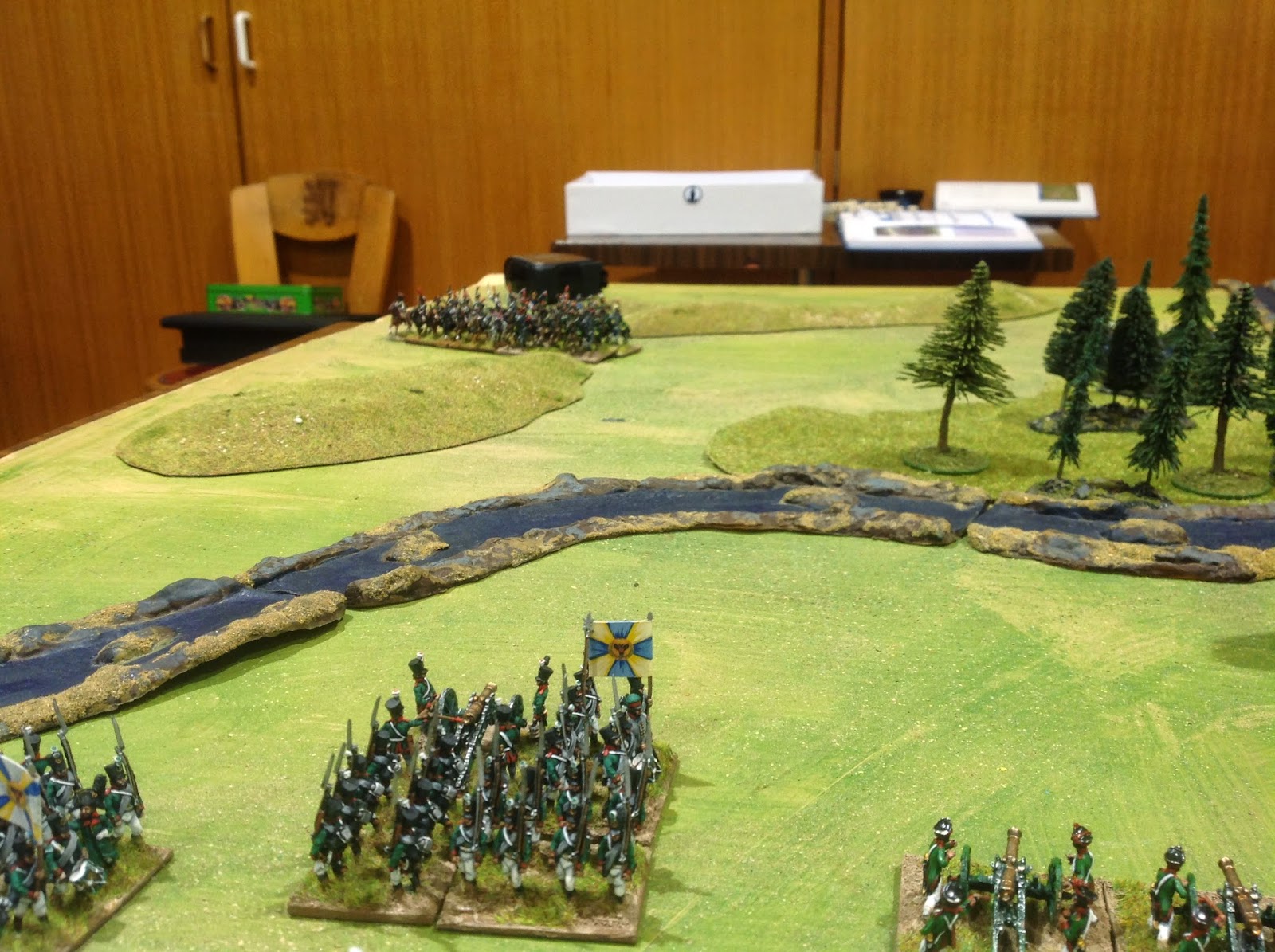 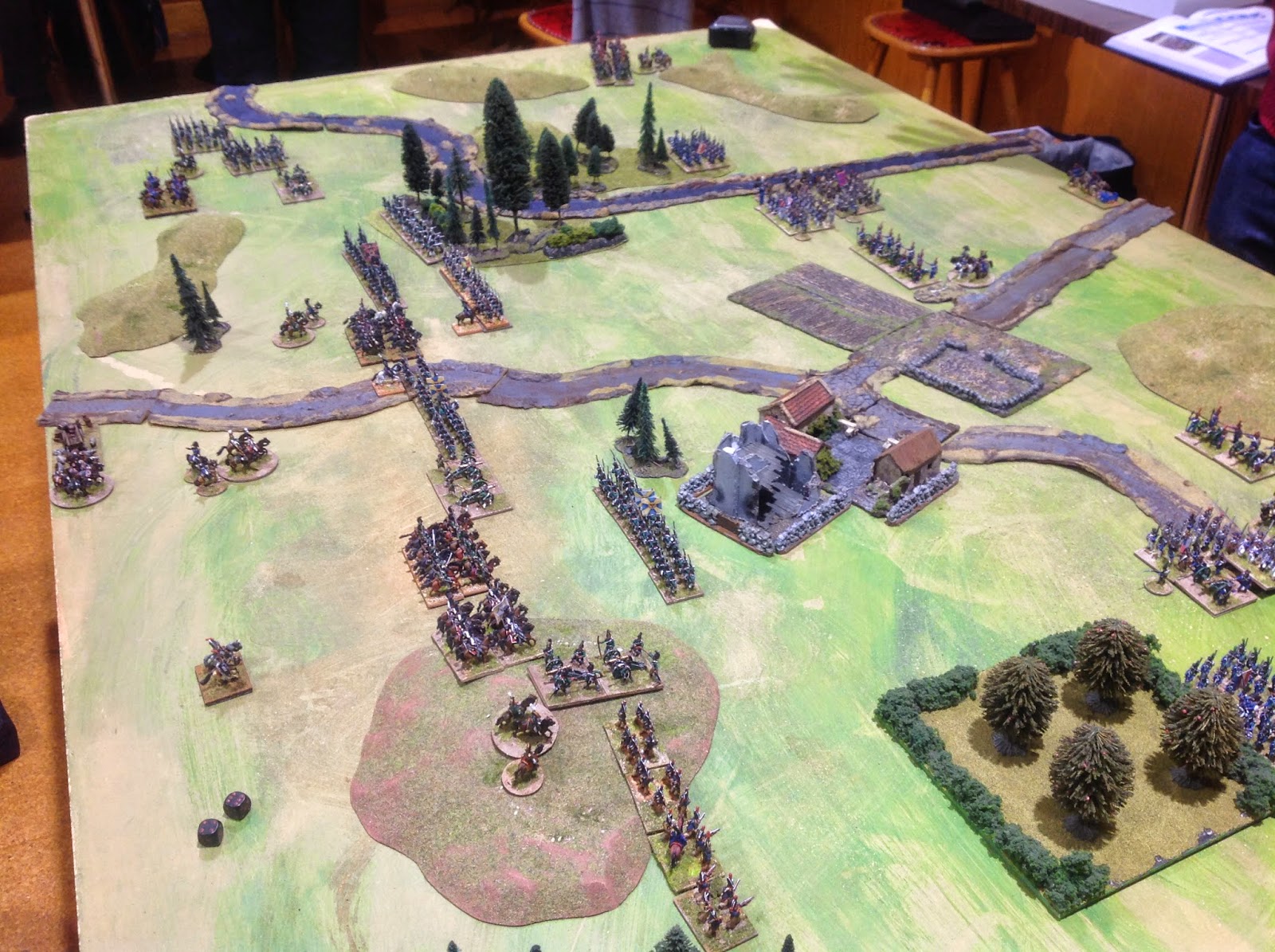 BELOW: Fighting erupts on the Russian Right Flank 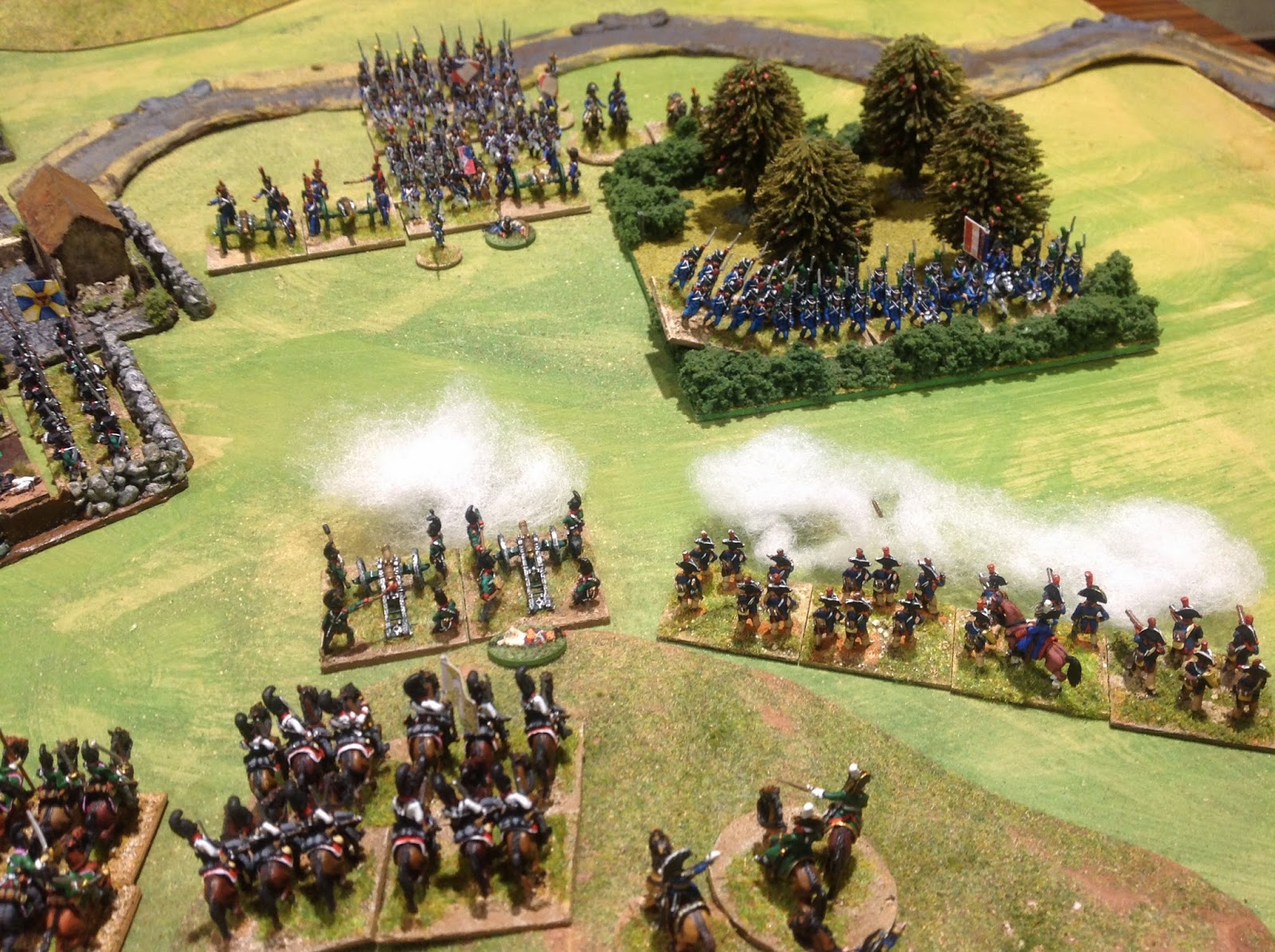 BELOW: French pressure builds on the Russian left. 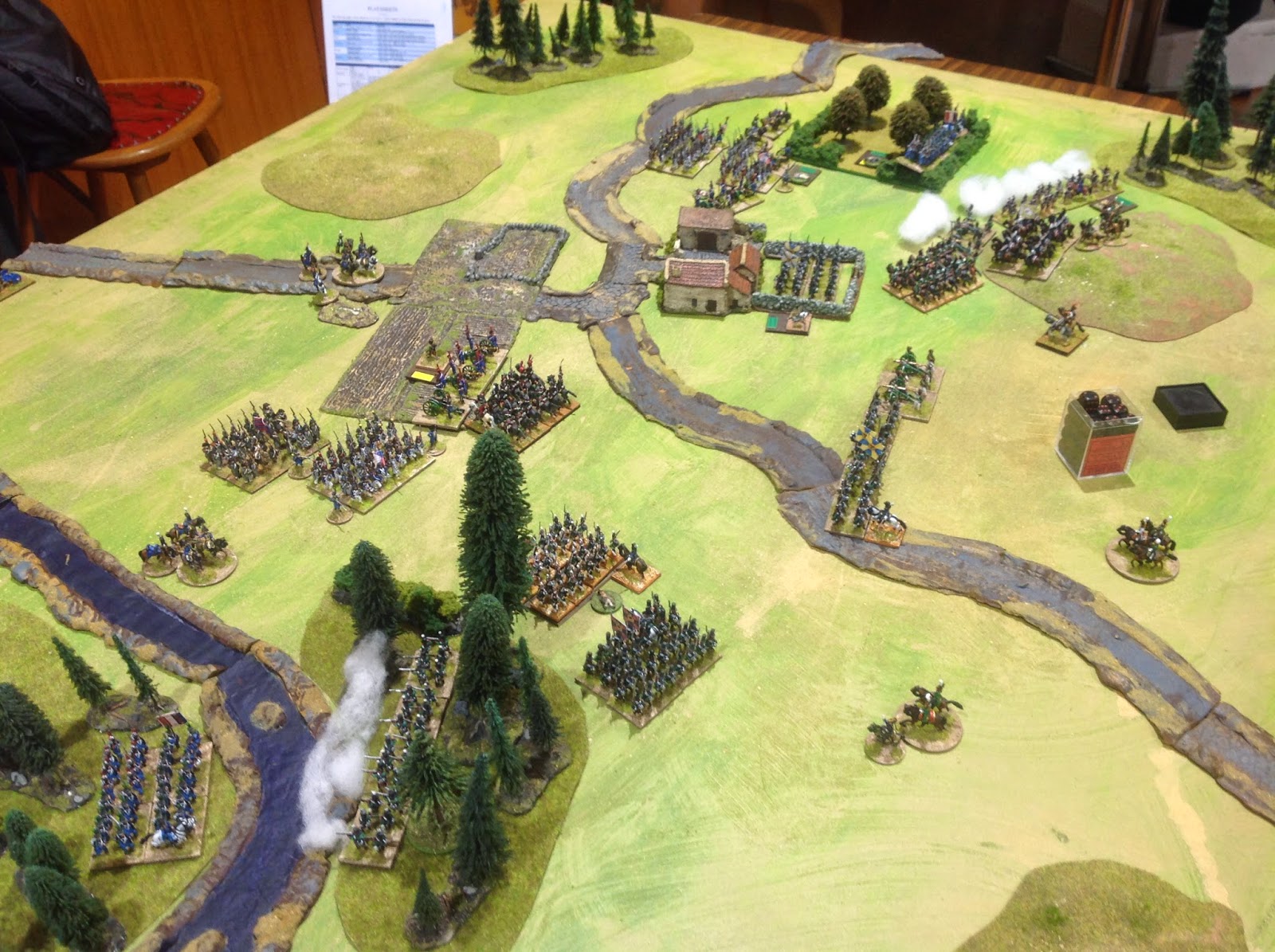 BELOW: The Russian attack in the centre goes in! Grenadiers supported by Russian Light cavalry and Artillery. Flanked by Russian Jagers on the left and a Division of Infantry and the Cavalry reserve on the right. The French are spread to thin,... 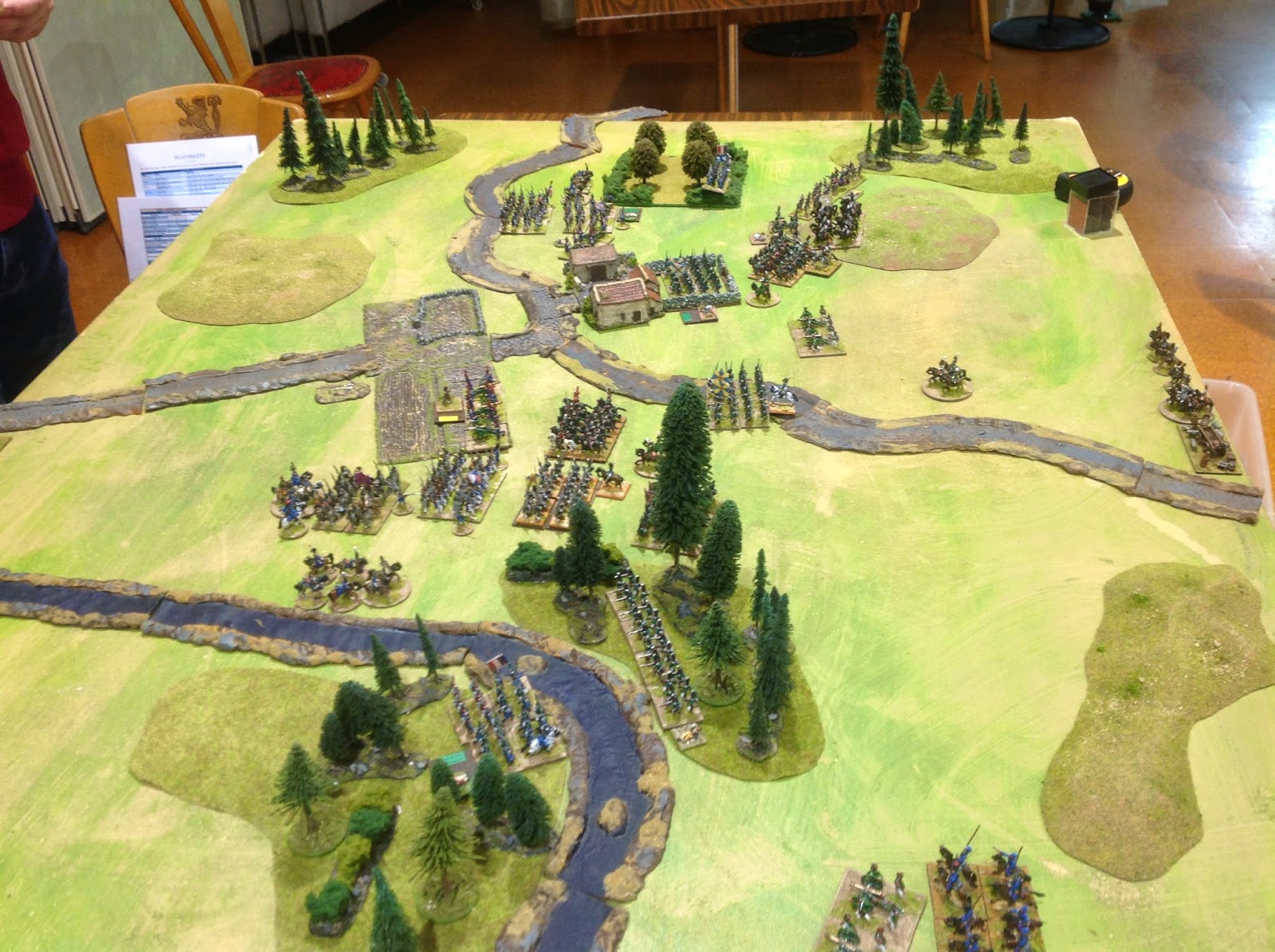 BELOW: French light infantry and Russian Jagers face off across the stream. These two brigades face off each other the entire battle.

BELOW: The French Light Cavalry division. Spectators for the entire battle. I suspect Arnaud wished he'd used them in the centre. 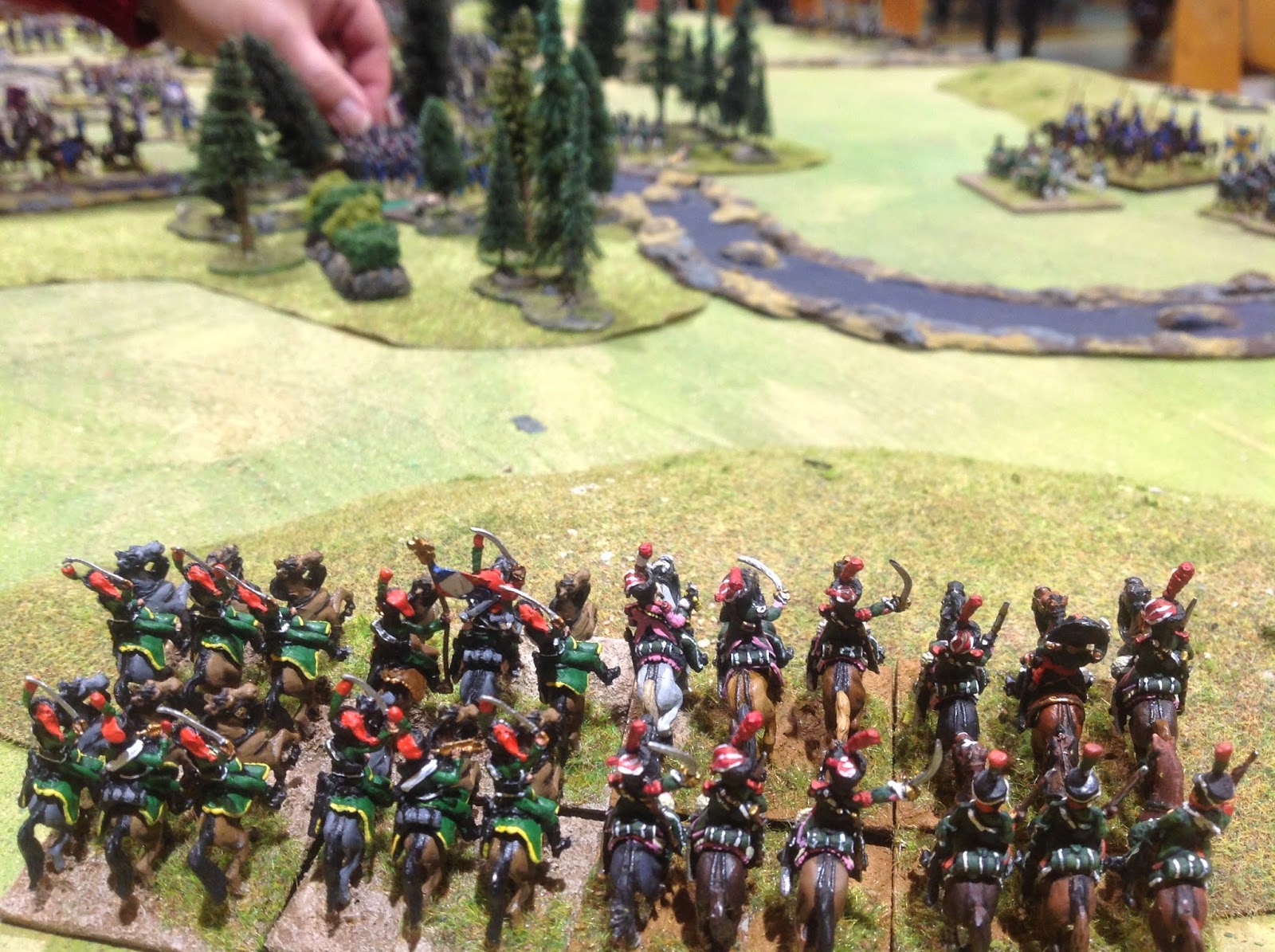 BELOW: The Russian assault closes with the thin French 'Assault' in the centre. 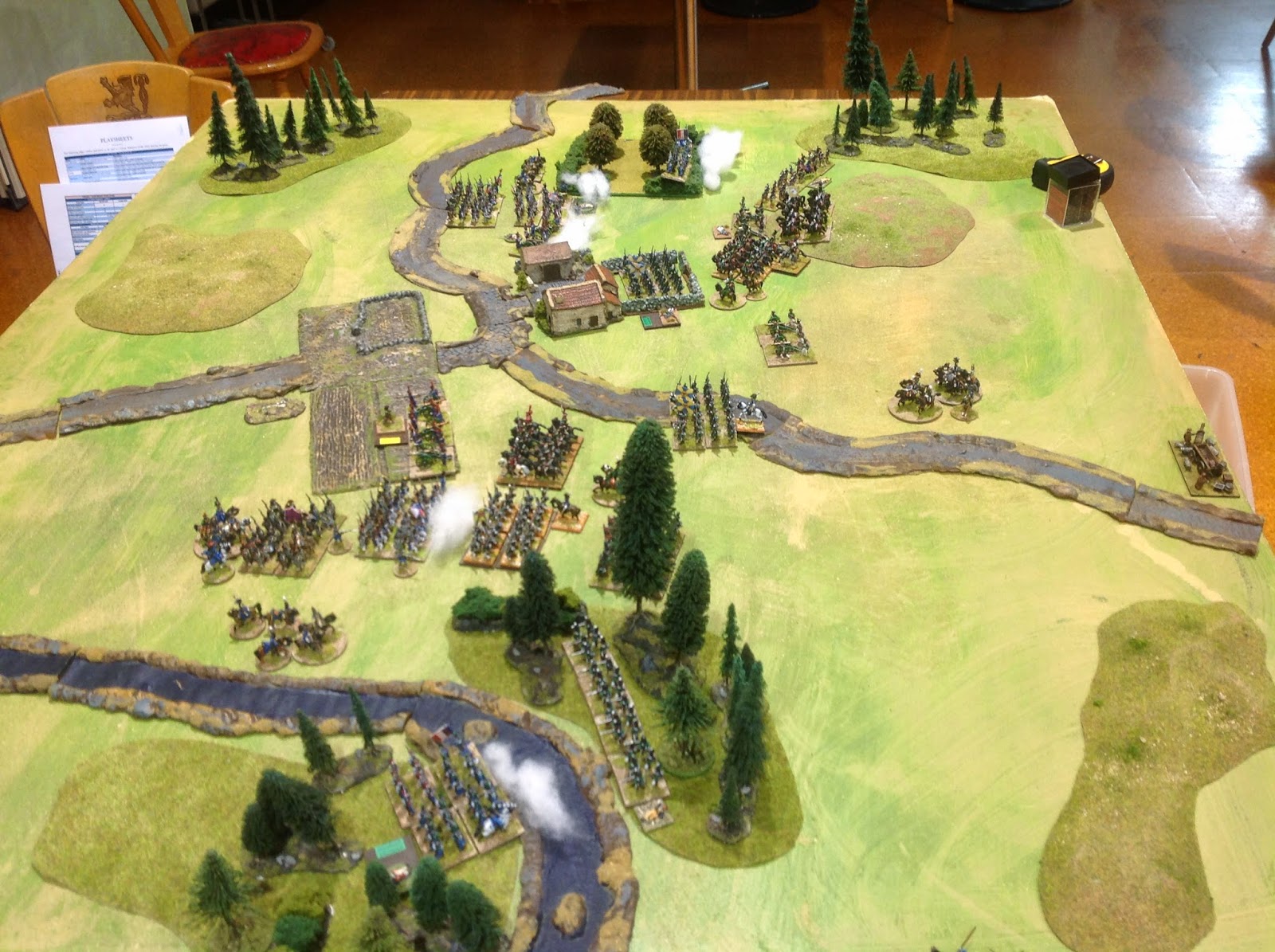 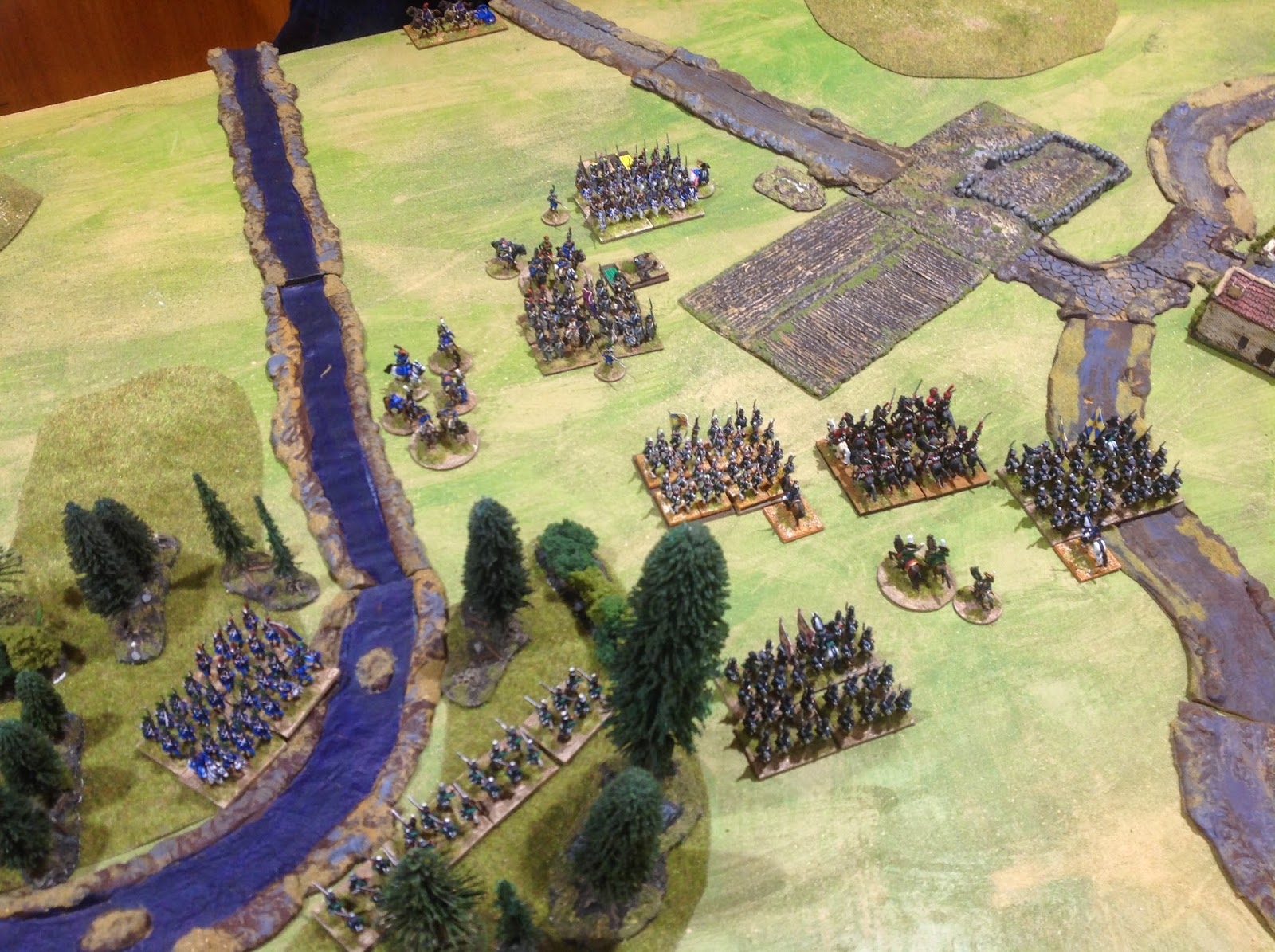 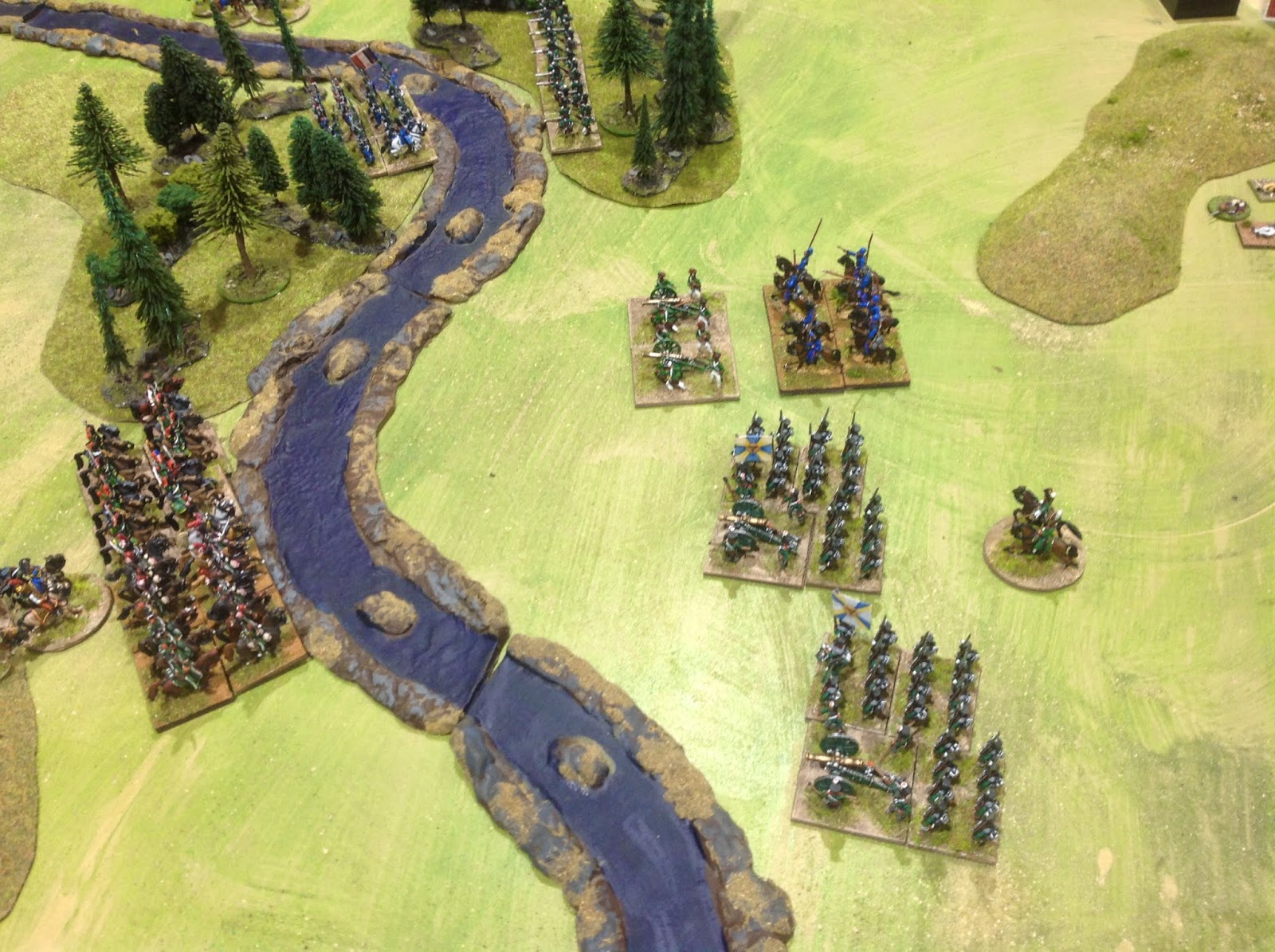 BELOW: After the Russian success in the centre the Russian Reserve cavalry attacks on the right, smashing through the French brigade between the orchard and village. 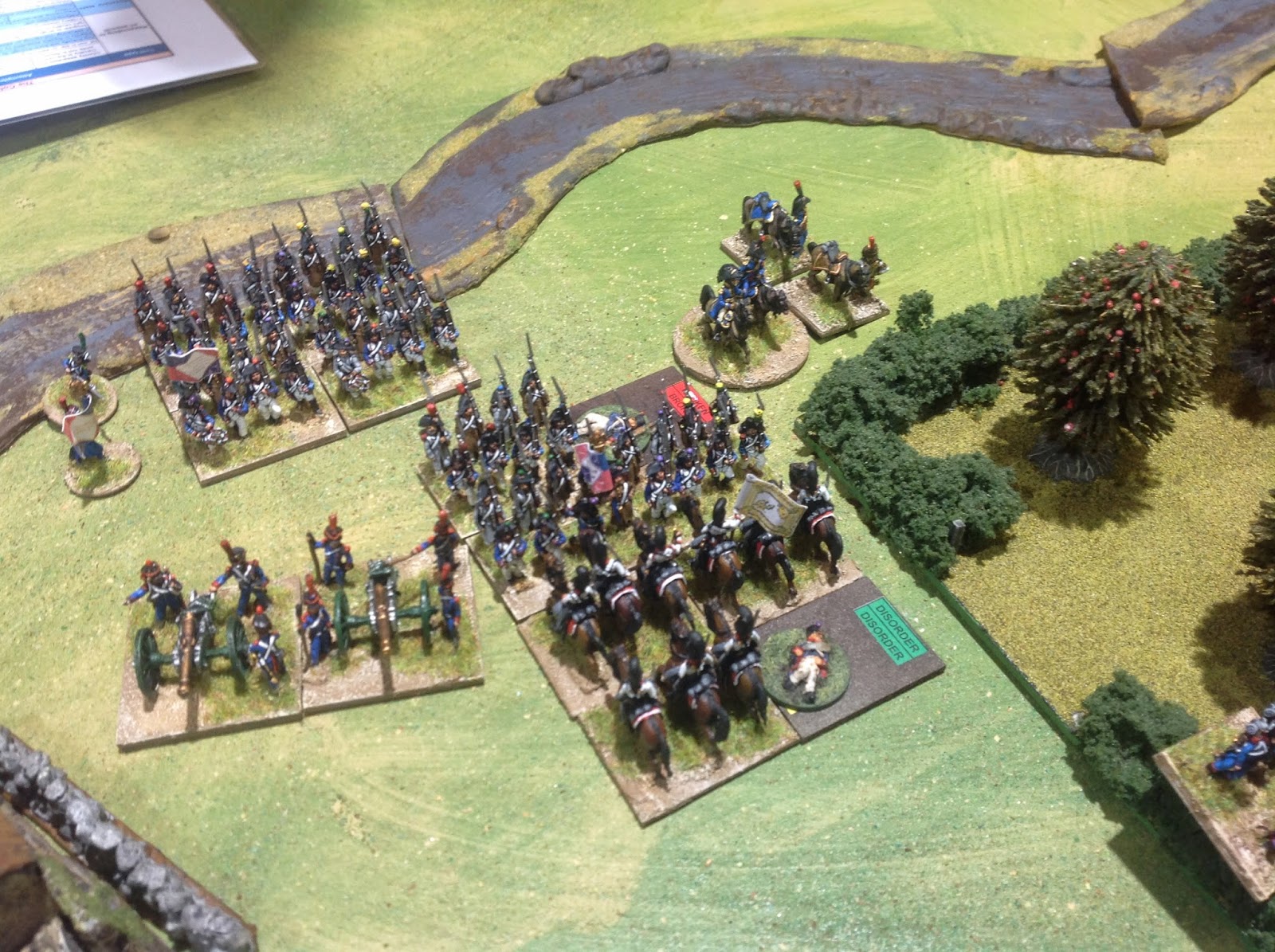 BELOW: The French failed to form 'Square' with predictable results. 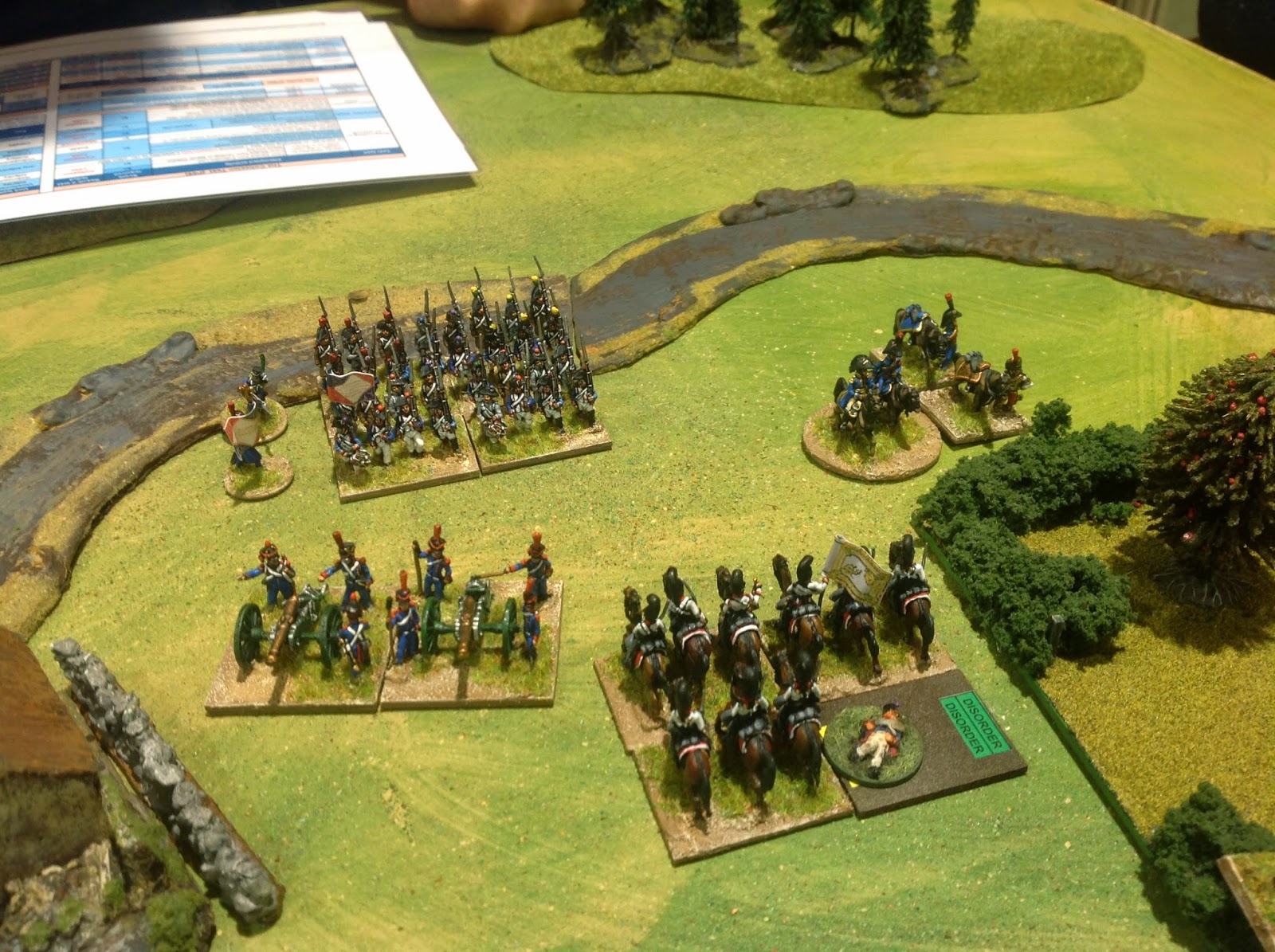 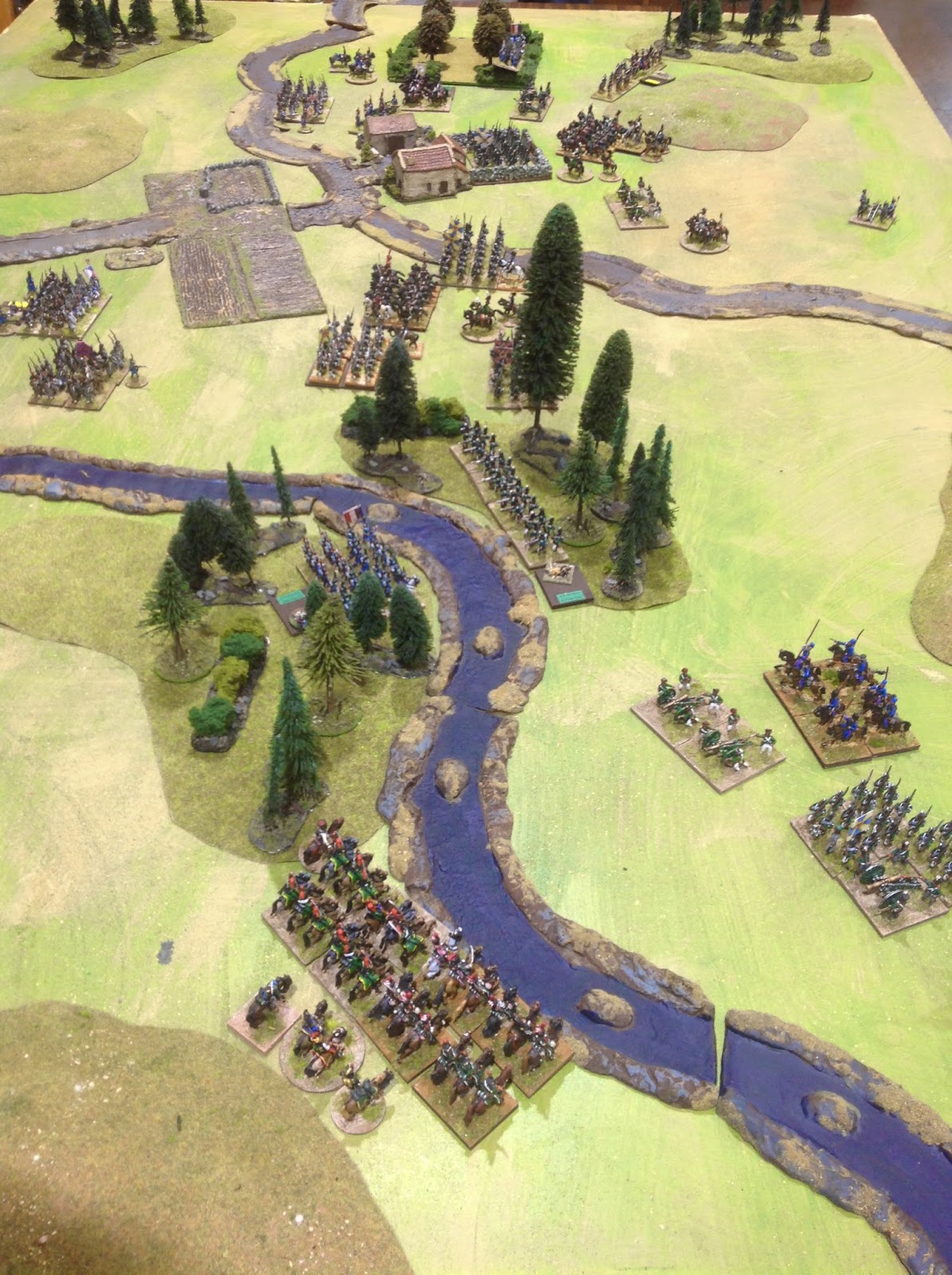 Conclusion:
Arnaud and I had forgotten what a great game FoG:N gives you.
Like I said, we made some mistakes with the rules but we cant wait to play again.
The LoA will be hosting a FoG:N Tournament in July and I'm keen to give my Dutch Belgian Reserve Corps of 1815 a run. A sea of crud but a pretty army.
Until then, keep your powder dry.
As usual, comments are welcomed.
Cheers
Posted by Trailape at 3:56 PM 5 comments:

﻿
The dawn broke over the small stream that ran along the front of the tree line before rolling into the leafy forest.
Men in blue coats quickly finished filling canteens and returned to their 'Colours' as drums beat a call to arms.
The Union troops finished badly cooked breakfasts and packed away tents.
After their defeat at 'The Cornfield' in June the Union Brigade had withdrawn north back to join Pope's Army of Virginia. They had not been present at the debacle at 2nd Manassas and had now become part of the Army of The Potomac.
The Brigade was now operating again as an independent Brigade tasked with defending the logistic centre near Boonsboro
Now as the Union army under command of 'Little Mac' went into action at Antietam Rawlin's Brigade was preparing to defend the town supplies concentrated nearby from a rouge Confederate Brigade that was approaching from the north west. Were they intending on raiding the supply depot or were they simply hurrying to the sound of the guns blazing away near Sharpsburg?
It really didn't matter why the Confederates were there, only that they were there and looking for a fight. 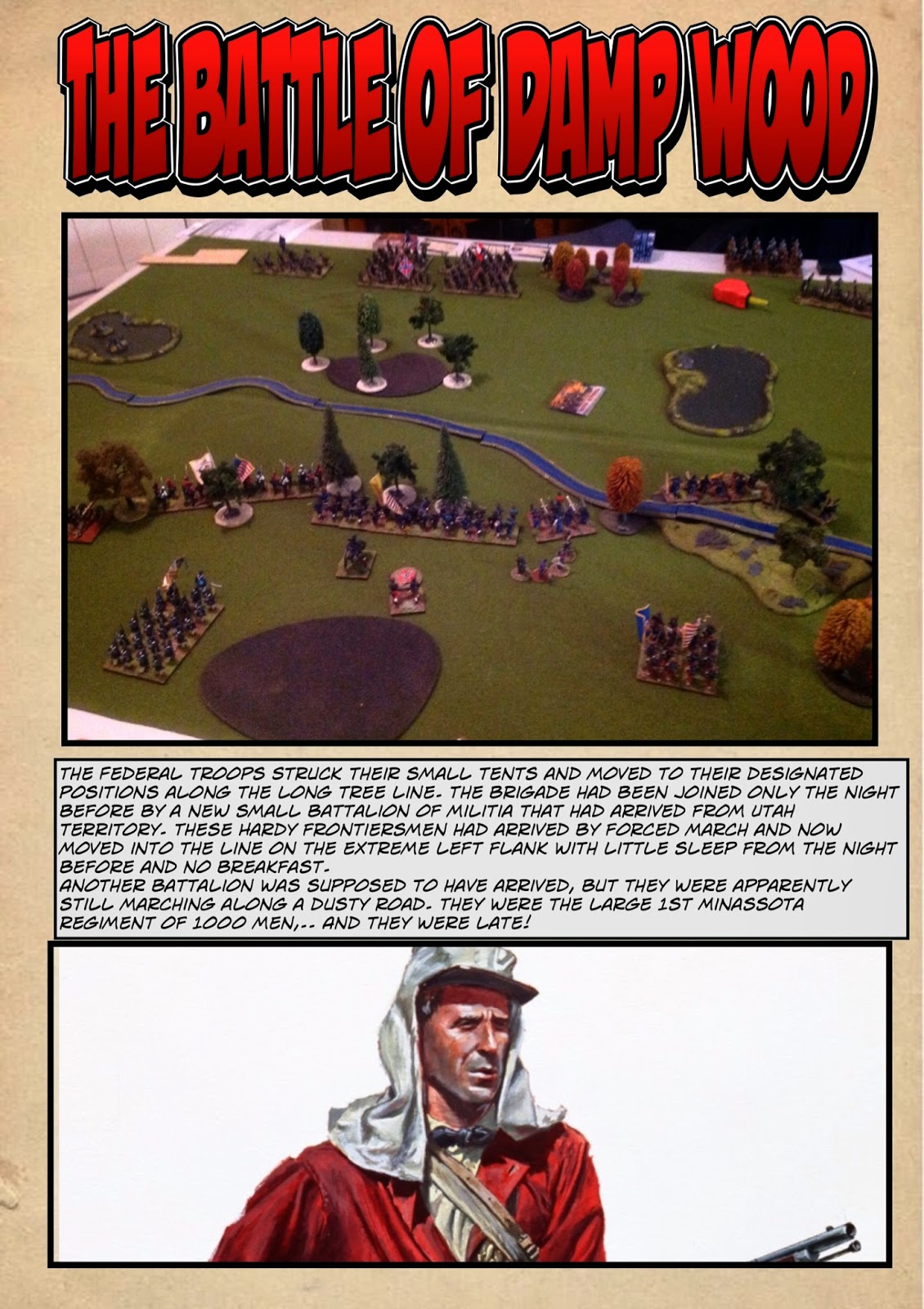 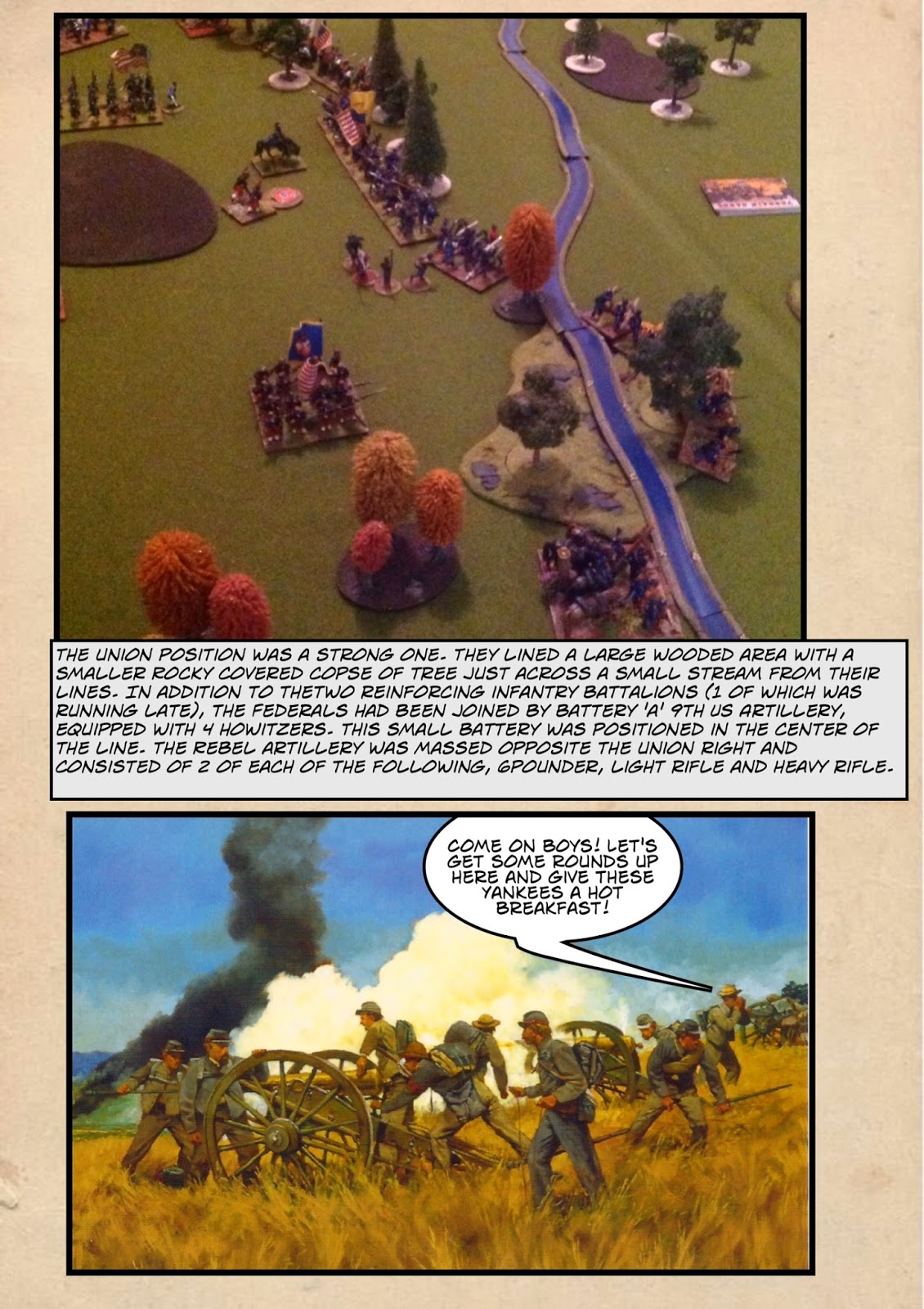 Across from the federal position the confederate brigade prepared for battle. Their artillery was positioned so as to provide fire support to the massed Reb infantry. It was apparent to the union commander, Brigadier Rawlin, that about 3000 rebel infantry intended to advance on the center of the union line via the woods and broken ground in the center of the field of battle. The rebel cavalry appeared to be tasked with protecting the rebel artillery just in case the Yankees decided to go on the offensive, or maybe exploite some opportunity if it presented itself.
"We will keep the Marines in reserve" Brig Gen Rawlin gestured to an aide and his horse was brought to him. "I expect the Rebs wil fall on our center. The 1st Maine and the 11th New York will meet them. I will use both batteries to fire into the flanks of their assaulting columns as the come on as I know the will. The 14th Brooklyn will counterattack the left of the enemy attack and the new boys from Utah will strike the right. The cavalry will hold our right flank. Hopefully the 1st Minassota will arrive soon, but we need to be ready to fight this day without them. Those people over yonder mean to drive us off. They're arrogant people. Today we must stand firm"!
Rawlin settled into his saddle. "I'm confident we will prevail men, with or without Minassota".

BELOW: The Rebel Deployment. 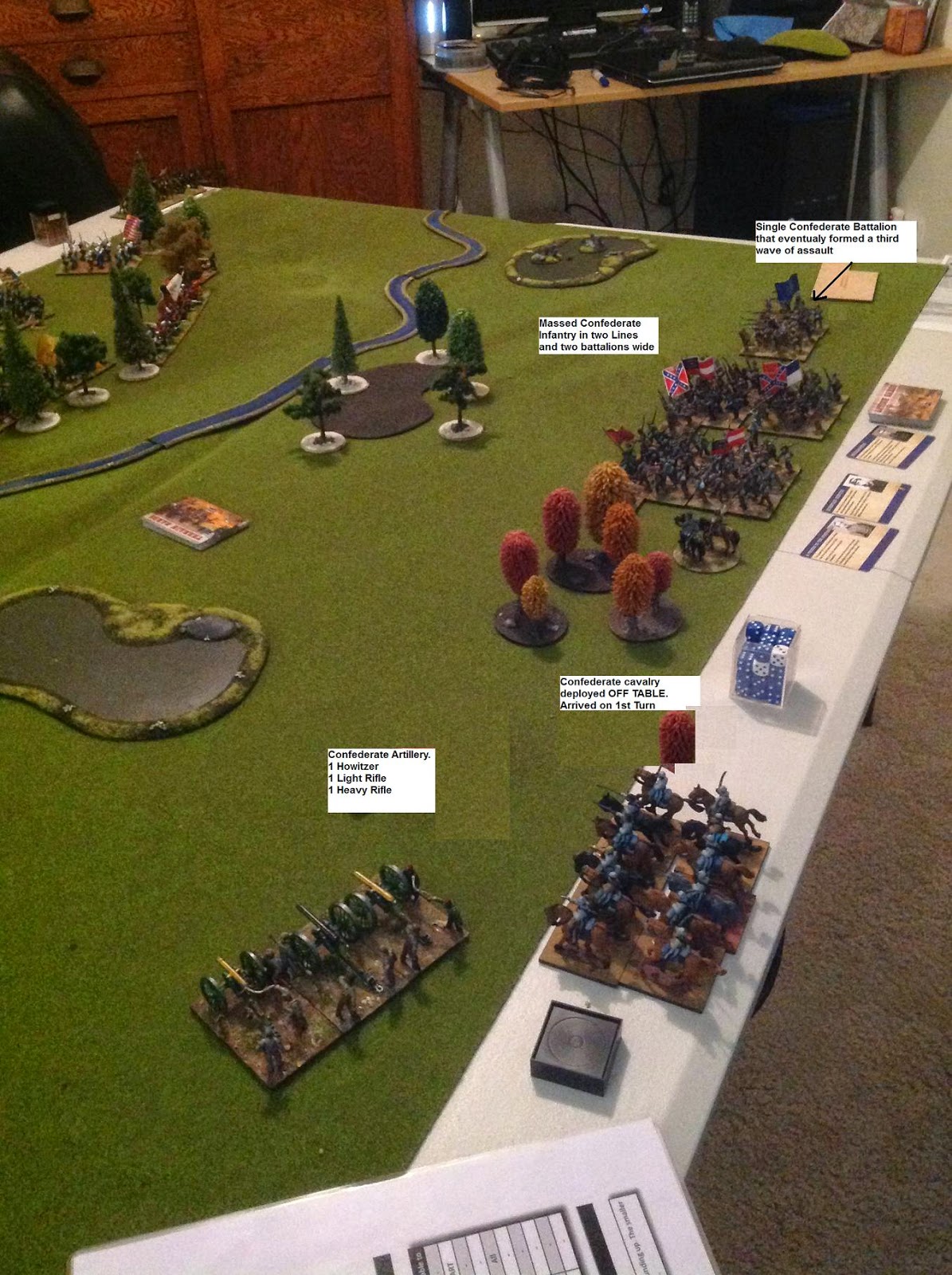 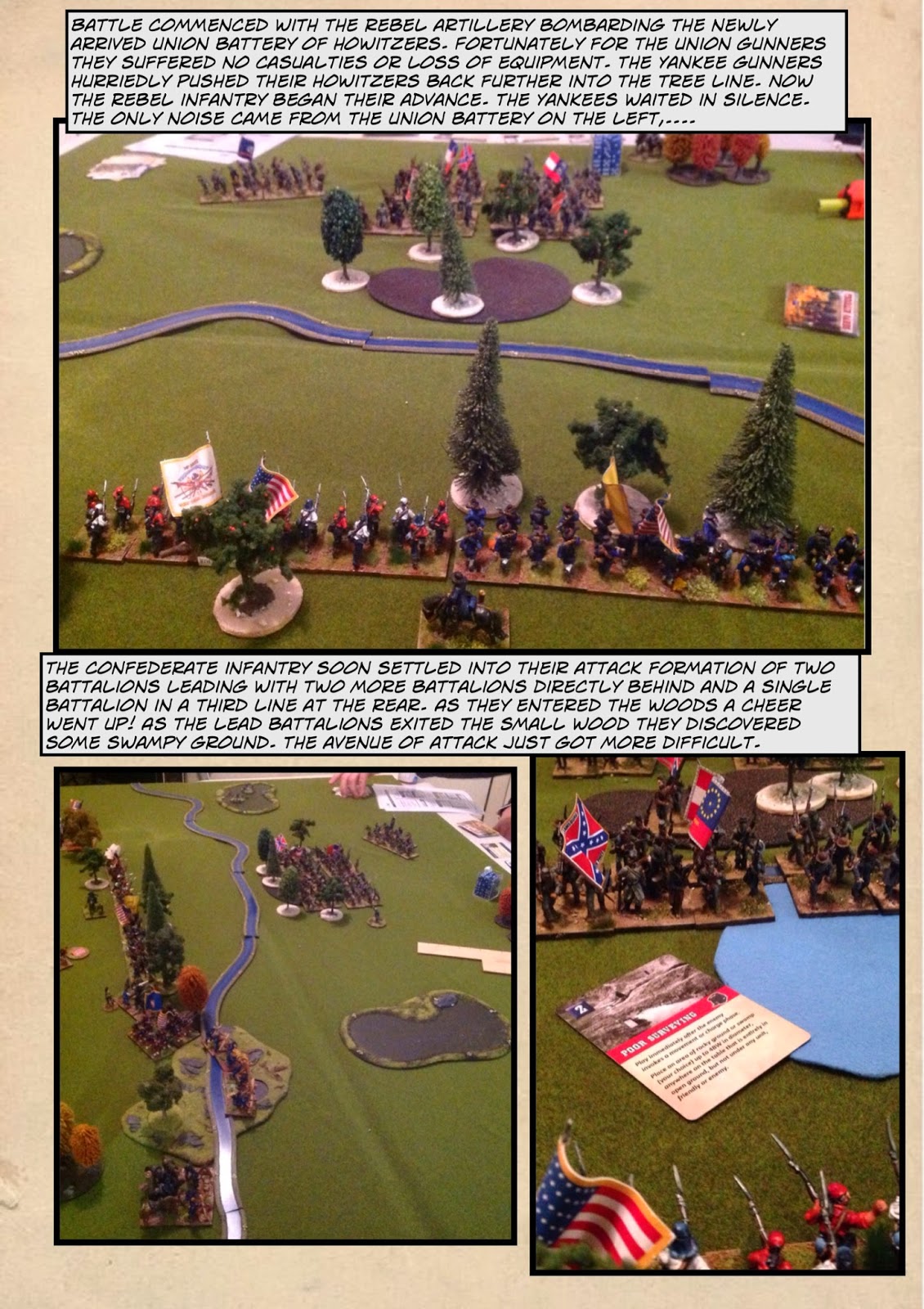 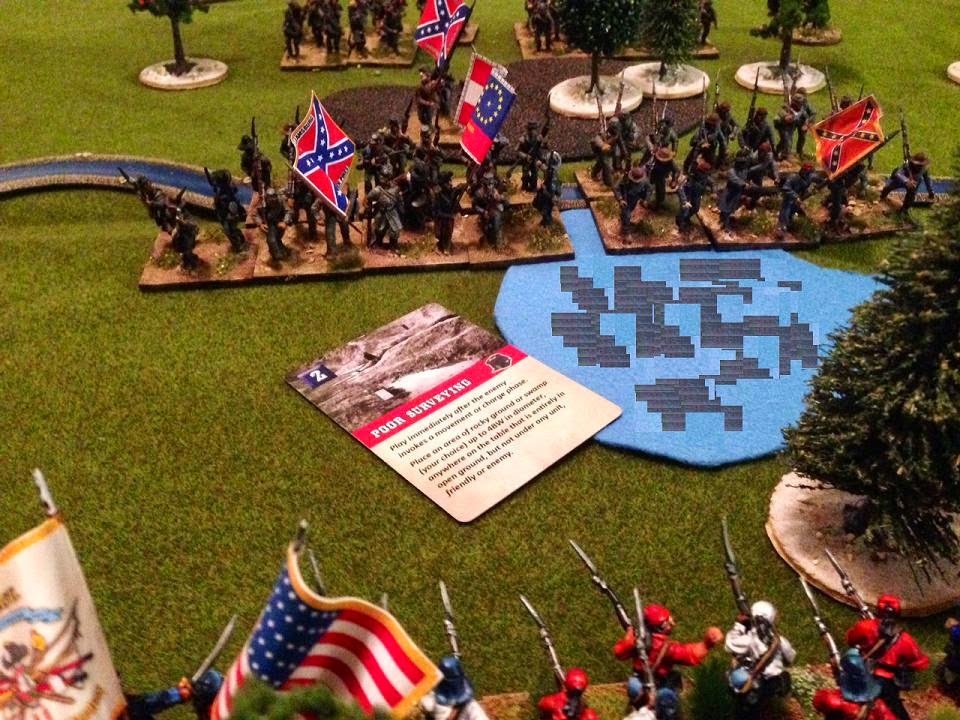 ABOVE AND BELOW: As the Confederates emerge from the small wood they are confronted with an unexpected swamp.
The 11th New York Volunteer Infantry 'Fire Zouaves' lead the charge against the Rebs! The 1st Maine supported them on their right flank! 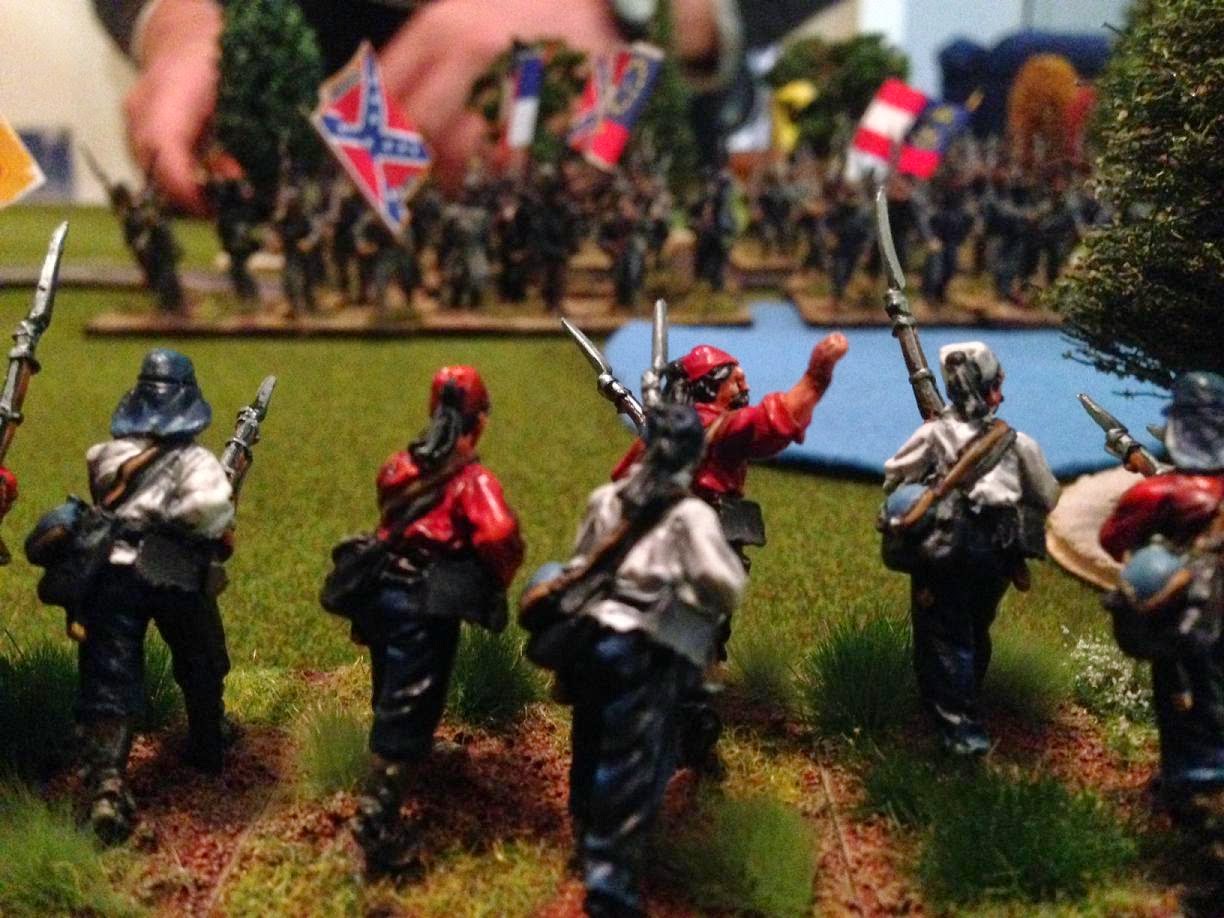 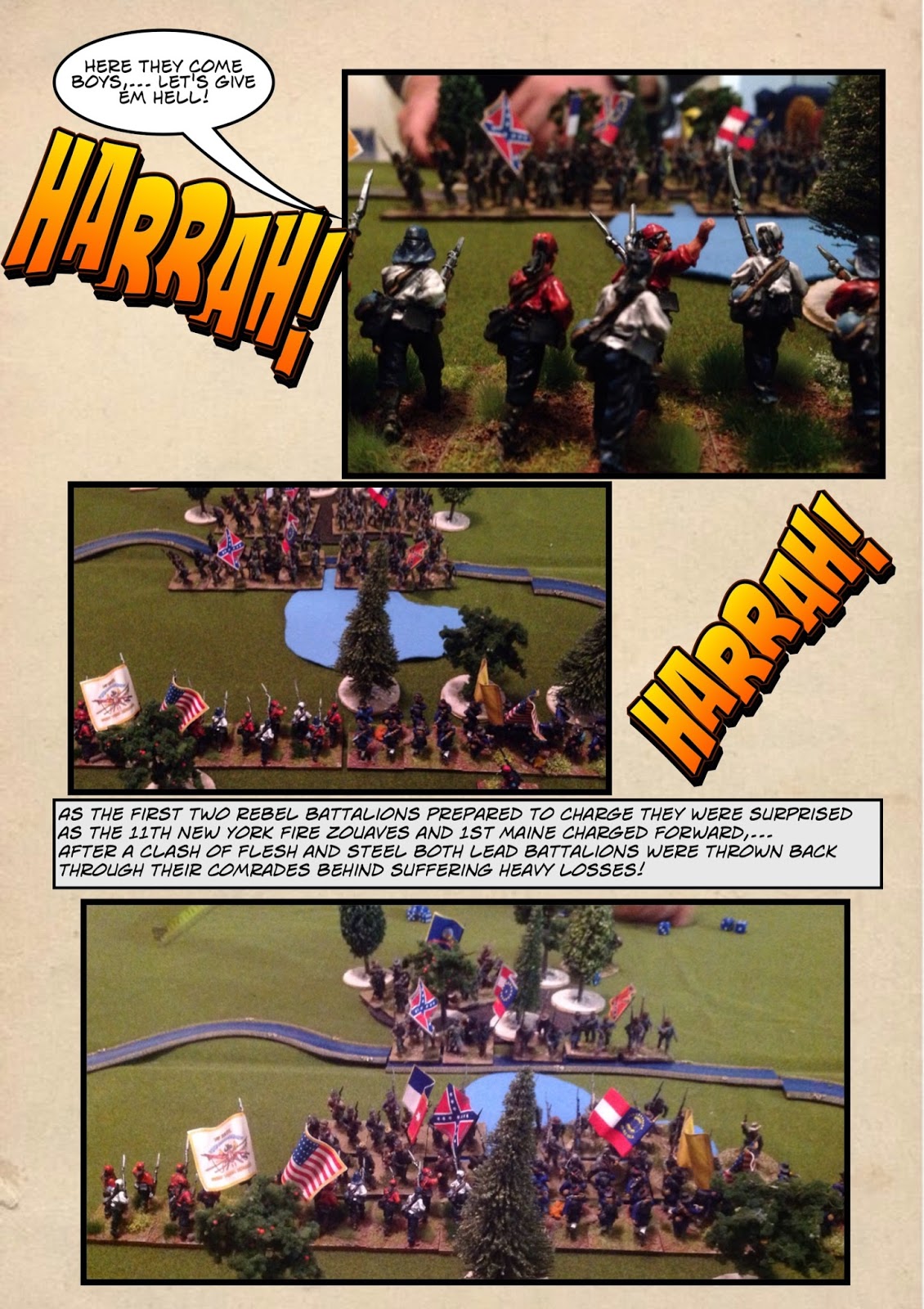 During this heavy fight Sergeant (SGT) Clements of the 1st Main (Heavy Artillery) sigle handly slew 4 rebs who attempted the carry away the Regimental Colours of his regiment. Grasping the large yellow flag he yanked it from the grasp of a rebel Corporal and swinging his rifle like a handspike clubbed the Grey uniformed man down. As three more rebs came up to claim the flag SGT Clements picked up a fallen officers sword and ran the first man threw before drawing his revolver and shooting the other two. 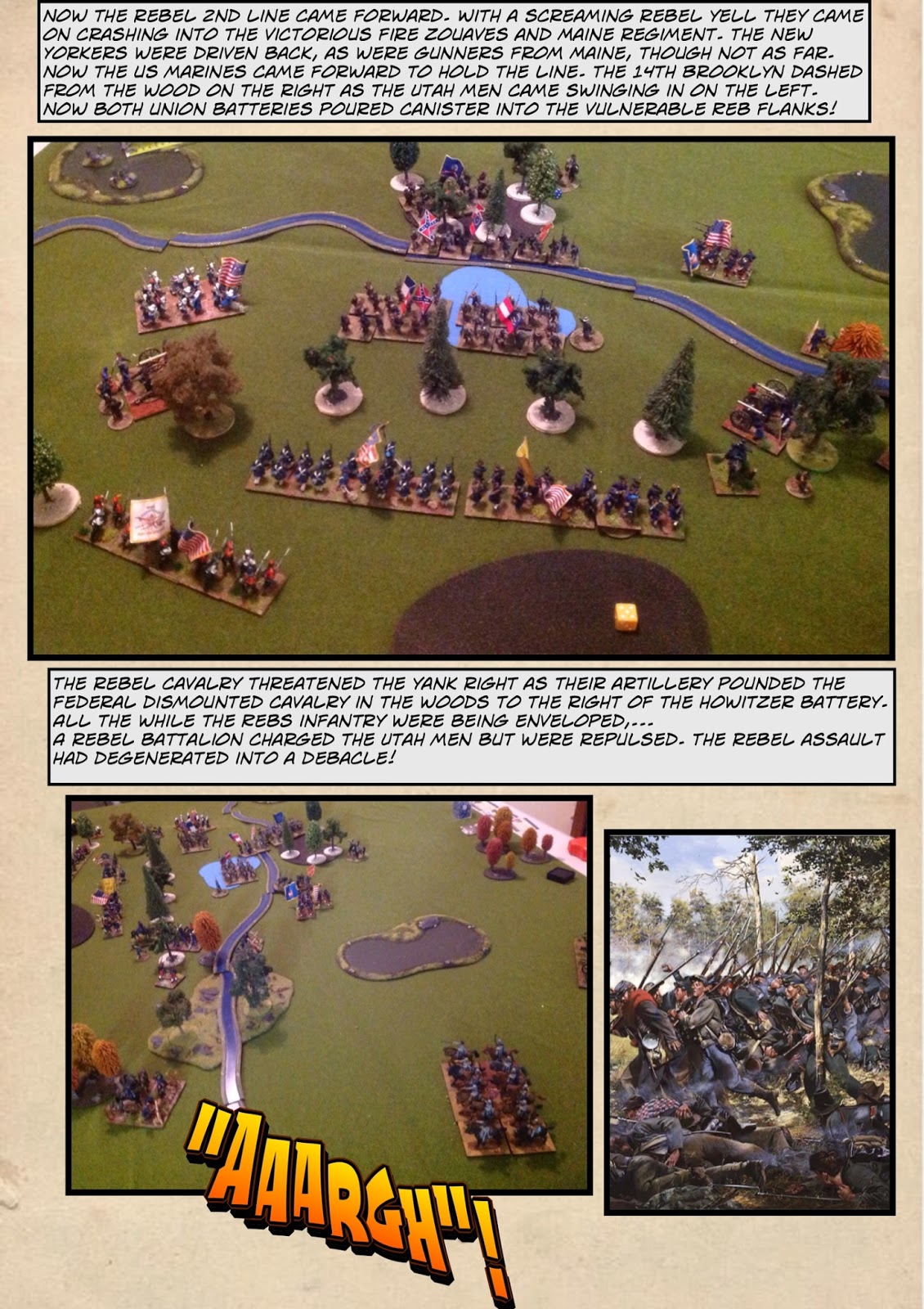 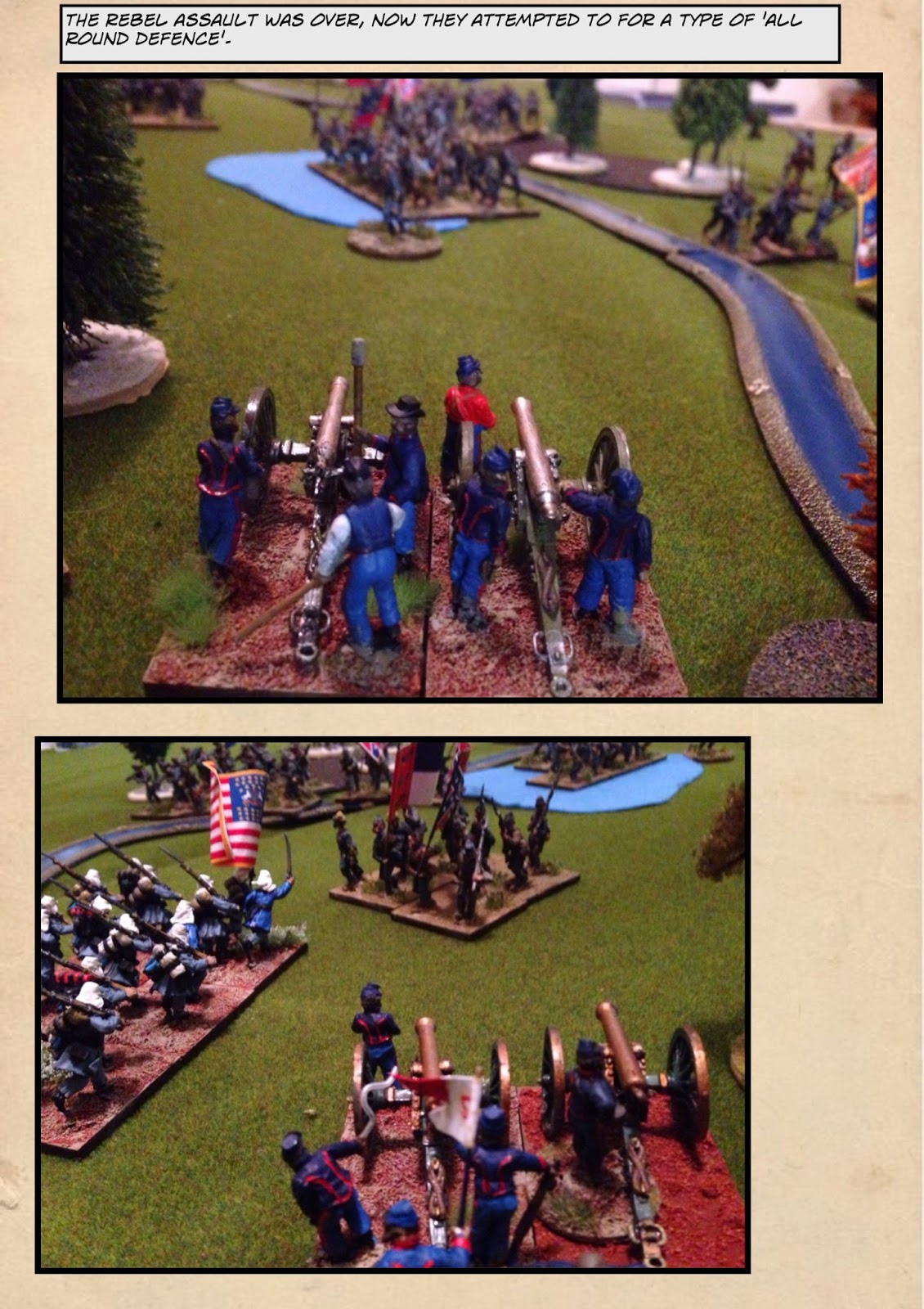 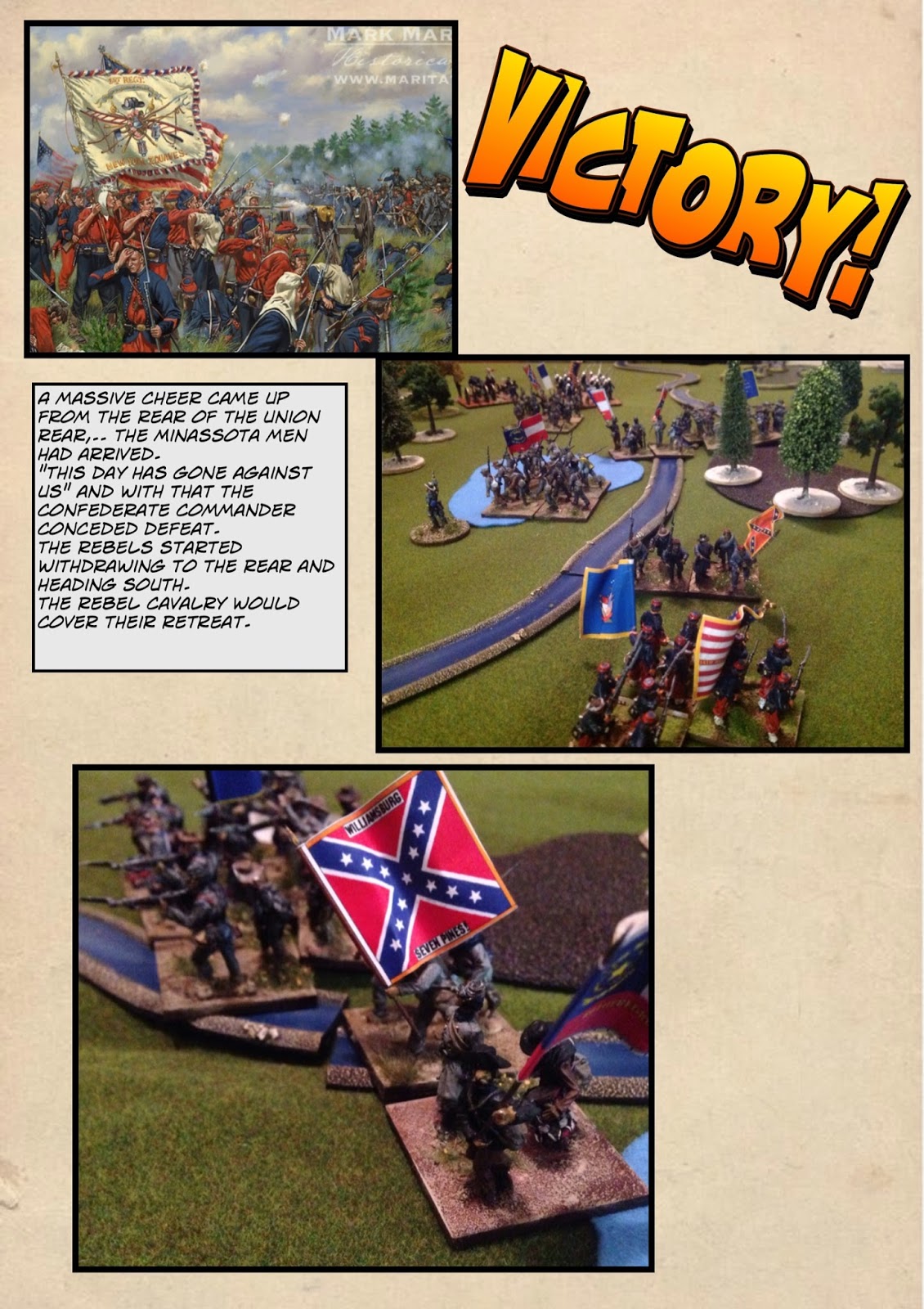 It was an tough battle for the Rebs. Even with my largest battion off the table, (the 10 based 1st Minnesota) it was always going to be hard for the Confederates to succeed in driving the yanks away.
After the battle both Brigades reordered themselves and recieved reinforcments and rplacements. As usual sicknes in the camps took as many lives as battle itself.
Brigadier General Rawlin formed a provisional Regiment out of the remains of the US Marines and the 14th Brooklyn with the three remaining companies forming a small 6 company Battalion.
The Utah Volunteers fought like demons, and were upgraded to 'Veteran' status.
News of the arrival of a small Regiment from New York and a 4 gun (2 base) Light Rifle Battery was very welcomed news.
As 1862 slipped into 1863, 'Rawlin's Brigade' now looked like this:
INFANTRY REGIMENTS

The Utah Volunteers: Eager Veterans 6 base


As for EPIC POINTS, Brig Rawlin's total was 9. (three from each battle) and he had achieved one Promotion (after the 2nd battle).
Despite his success at this engagment no promotion was forthcoming.

Stan and I also decided on a new HOUSE RULE:
BAD SURVEYING: Can not used in the enemy deployment zone and can not be place in an area between a enemy and TARGETED friendly unit once that those units are within 16cm of each other.
Posted by Trailape at 9:03 PM 3 comments: