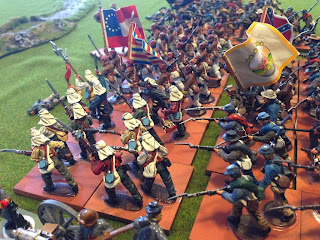 ABOVE: Part of my force. Louisiana Tiger Zouaves followed by the 18th Georgia Regiment
Hi Team
Well I've finally done it. I finally got around to playing a game of LONGSTREET. For those that don't know, LONGSTREET is the latest offering in the Honour Series of wargame rules by Sam Mustafa. Previous offerings have been LASALLE and MAURICE. I'm a big fan of Sam's two previous sets and you can find plenty of AARs on my blog if you are interested.
LONGSTREET is Sam's American Civil War rule set, the previous sets covering the Napoleonic and 'Age of Reason' periods. As you've probably guessed each set is named after a particularly noteworthy General Officer of the period being gamed.
It just so happens that Lt Gen James Longstreet is probably the confederate officer I've been most interested in for quite some time.
I purchased these rules as soon as they were available but unfortunately due to illness I've not had the opportunity until now to actually play a game. Fortunately however my gaming buddy Stan and his beautiful family ended up spending Christmas and Boxing Day with my family and we both we keen to squeeze in a game.
I'd just finished basing some Confederate and Union troops, and Stan had brought with him his ACW collection. Neither of us however had any cavalry, so it was destined to be an infantry dominated affair with a battery on each side.
Much to my shame I was going to have to use troops with unflocked bases but at least they were painted.
We had both read through the rules but I'd never played a game and Stan had only played about one or two games previously.
We settled on playing a scenario and dice roles resulted in the 'Meeting Engagement'.
Graciously Stan allowed me to pick a side, so I chose the side of the Confederacy.
Both sides would consist of three large ten base battalions of infantry and one three piece Artillery Batteries consisting of two six pounders and a howitzer.
All infantry would be EAGER RECRUITS for simplicity and the year would be 1863.
In LONGSTREET the year you are fighting in is of importance as certain advantages will be enjoyed by either the Confedreates or Union sides. For example early in the war (1861 to 62) the Rebs have the advantage. Later in the war (1864-65) the Union become more dominate. 1863 sees both sides fairly even, and this showed in our game.
Preparation for play is very straight forward. Each side is activated and maneuvered through the use of a 'hand' of six cards which is maintained at that level by drawing the appropriate number of cards from you deck consisting of cards based on the side you're fighting for and year you are fighting in.
The battlefield was dominated by a hill on my left flank and a few fields of standing crops in the centre. Three clumps of wood covered my right flank. 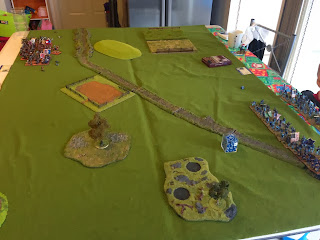 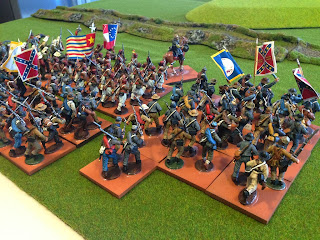 The battle itself was a rather straight forward affair. The Federals moved up between the 'Three Pond Woods' and the open ground to their right. I suspect their plan was simply to stand their ground and shoot me up. The Federal Battery was deployed on the Federal right, and I thought my best option was to rush my Battery forward over Boxer Hill and bring enfilade fire onto the Yankee line. 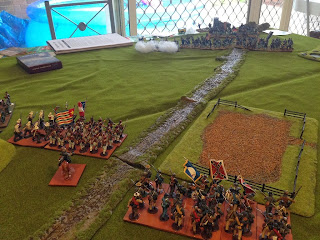 ABOVE: My brigade advances and is met with the first shots of the day from the Union Battery.
BELOW: "BOOM BOOM BOOM"! 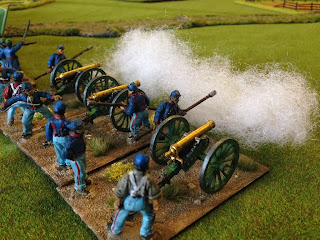 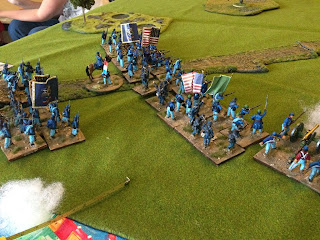 ABOVE: The Thin Blue Line.
The Louisianans' were to have the privilege off capturing the Federal artillery but someone failed to notice the swampy ground directly between them and the Yankee guns, (Stan played an 'interrupt card' that resulted in the swampy ground being 'discovered') . They were a mixed lot these boys from the Pelican State being the dregs from the 'Tigers' and some fresh faced firemen from Baton Rouge (See Below). 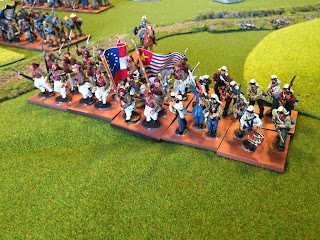 BELOW: As the Rebs advance they are surprised to find a swamp. 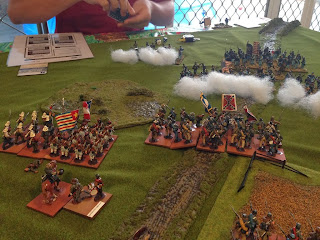 As the  Louisianans' contemplated what they were going to do about the swampy ground before them the remaining Confederate infantry pressed forward determined to settle the matter with the bayonet!
Meanwhile the Confederate Battery finally came into action and started a duel with the Yankee gunners. 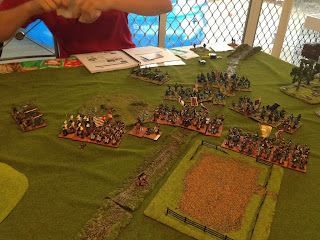 Immediately the 8th Virginians in the centre of my line unleashed a "Rebel Yell" and hurled themselves at the Federal 'Irish' Regiment. The Irishmen stood their grand manfully and the result saw the Virginians driven back a considerable distance.
BELOW: Hot Yankee lead greets Rebel Cold Steel. 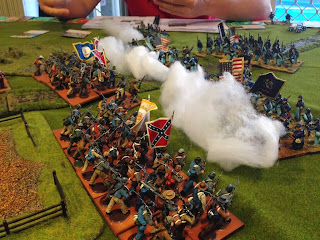 The 18th Georgia Regiment on my right were more successful. They drove off the Yankees they met but soon found themselves confronted by the Federal Regiment that was held in reserve and the reformed Yankees they had had the better of earlier.
BELOW: The 8th Virginian are driven back by the Irish, and the 18th Georgians are about to be monstered by two Union Regiments. Meanwhile the Reb Zouaves agonised what to do about the swampy ground. Apparently no one wanted muddy boots. 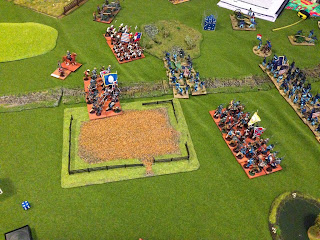 As the 18th Georgians were grudgingly but steadily driven back by the more numerous yanks the 8th Virginians edged forward and engaged the Irish in a musket duel that they steadily got the better of.
As this unfolded the Confederate Gunners also proved to be better at their trade than their Union counterparts and soon wiped out the Union Battery for the loss of one base (two guns) of their own guns.
Suddenly the Irishmen received some confusing orders, or maybe their Colonel decided that an advance was appropriate. Either way they found themselves disordered when part of their regiment blundered into the swampy ground.
It was at this point the Rebel Zouaves decided to throw caution to the wind. With the Union Battery knocked out they unleashed themselves on the Irishmen.
The Louisianans charge inflicted heavy casualties on the Irish and sent the reeling back.
BELOW: The situation after the Louisianan attack through the swampy ground into the Irishmen. 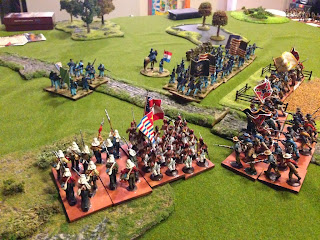 At this point the Federal commander called it a day. With only one base away from breaking and the Rebs now with the initiative (my turn about to commence) the writing was on the wall.
I was 3 or 4 bases away from defeat myself.
BELOW: The situation at the end of play. Two of the three Union Regiments reduced to half strength or below and their artillery destroyed. The Georgians were down to only 30% strength! 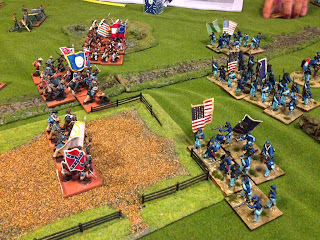 BELOW: The dogged 18th Georgia Infantry. 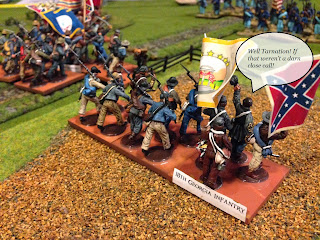 My conclusion:
LONGSTREET gave an excellent and 'flavoursome' game. One might ask "Why don't units rout"?
I guess it comes down to this. When units are forced to fall back by the bayonet they can be considered "Driven Back" (a short fall back move dictated by a low numbered die roll) or routed (a high die roll). It's assumed that once they have fallen back the required distance the Officers, Sergeants and other NCOs have got the remainder back into some semblance of order and back into the fight. This seems consistent with my readings of the conflict.
The card driven system ensures a quick paced and exciting game. You never know what spanner your opponent will throw into your gears with an 'interrupt' card.
All the game mechanisms are very straight forward with rolls to hit and then Kill when shooting.
Hand to Hand combat is a little more complicated but is quickly picked up.
The player has the option of using cards to remove some 'Kills' but in doing so might have to give up a card or two that really could prove useful later on. Decisions decisions,...
I HIGHLY recommend LONGSTREET for those that have a hankering for battling Regimental to  Brigade level games in the American Civil War.
All Miniatures were a mix of PERRY MINIATURE (both Plastics and Metals), some Sash and Saber Miniatures and Old Glory 2nd Edition Miniatures. Most of the Rebs were painted by Fernando Enterprise
Comments Welcomed!
Cheers