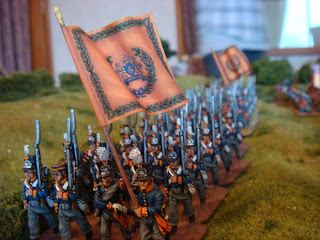 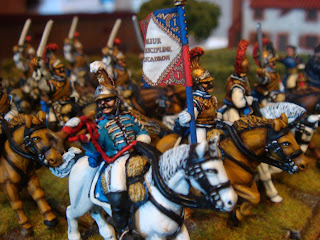 (Allied troops marching into position; and French Carabiniers in full flight! All part of one of the FANTASTIC demo games at Little Wars '09)
Well, I had a great time a Little Wars! So much to see and do. In the morning I played a few turns of "Hold The Weather Gauge", a Napoleonic Naval Game; (I think that's what it was called). Anyway; Great fun! Here we see two of my Spanish "Man-o-war" blazing away at a RN 3rd Rate. 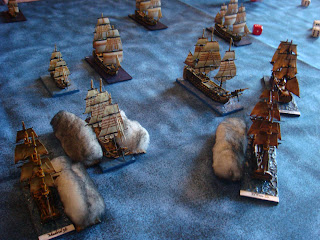 I'm sad to say my Spanish ships were soon blown out of the water by the Royal Navy, (so nothing new there). I must have enjoyed the game though, 'cause I was soon over at the Olympian Games Stand and the Bring And Buy Stall buying some GHQ Micro-Naught Napoleonic Ships! They will go nicely with the LANGTON Ships I purchased a few days ago.In the afternnon I played a few turns of Fast Play Grande Armee, (or FPGA for short). What a great set of rules they are! And FREE for download. Here is a picture from the FPGA game: 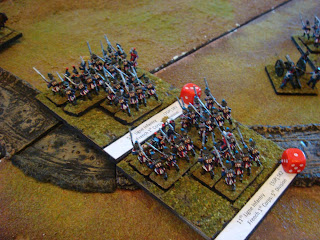 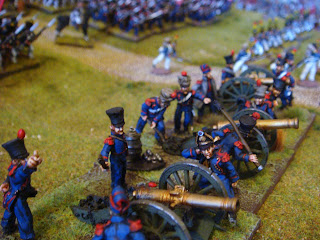 A highlight of the day was the re-fight of the battle that raged around La Hay Saint (Waterloo 1815) in 28mm. Fantastic terrain and stunning figurines. Suitably impressed I'm now inspired to redouble my efforts to have my Victrix and Perry Napoleonic figures painted. (Above we see the French Gunners in action, and below we see a photo of the French massing to assault the Anglo-Allied line): 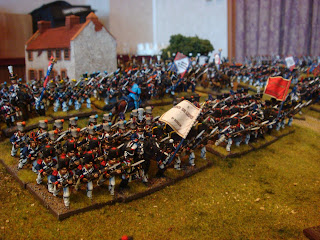 Posted by Trailape at 6:10 AM No comments: 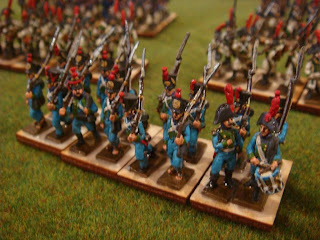 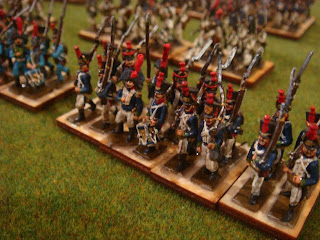 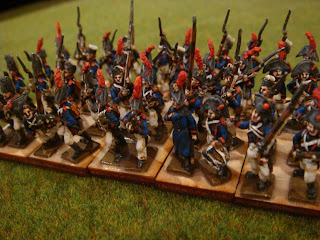 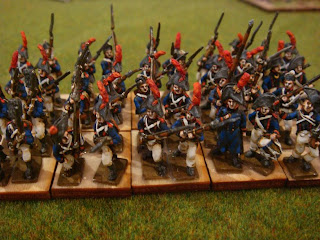 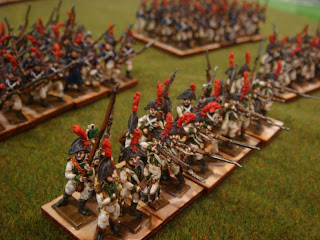 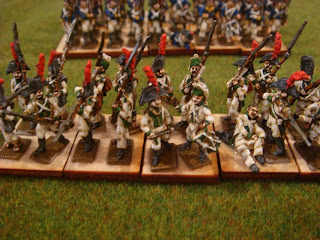 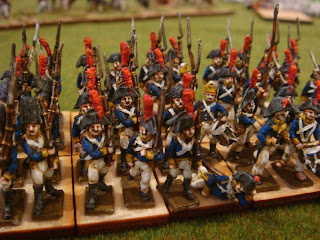 Hi Team
Here are some pictures of the Spanish Napoleonics I commissioned RBP to paint for me.
(see the review of their service here).
As usual, painted to a very high standard. I've not completed the basing yet, (still awainting the flocking), but I guessed some of you would like to see how they came out.
All the miniatures are the magnificent 18mm AB MINIATURES available from EUREKA MINIATURES in Australian. I think Fighting 15s produce them in the UK.
They are almost all from the AB Miniatures Spanish range of figures. The casualties are actually from the AB Miniatures EARLY PRUSSIAN Range, (Jena 1806).
CHEERS!
The bases seen here are from Litko BTW, (highly recommended).

Posted by Trailape at 2:56 AM No comments:

EUREKA! Some more figures to paint! 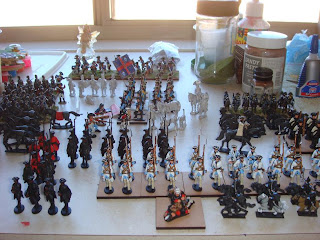 Hi All
Thought it was about time I came through with an update. Before I start, I thought I'd show you what MY painting table looks like. Not at all the neat and tidy desk that the vast majority would be use to I expect.
Here we see some MINDEN MINIATURES French Infantry I'm working on, (more on these later), and some completed EUREKA MINIATURES and some near completed AB Miniatures.
First let's look at the Minden Miniatures French. 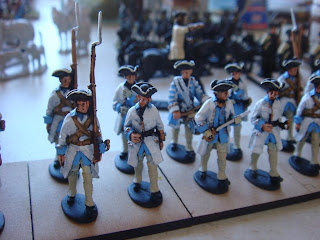 I'd like to say I could paint to a standard that these guys deserve, unfortunately I can't. What I can say is they are beautiful little miniatures. They are probably the most anatomically correct miniatures I've ever seen. Fantastic detail. My only criticisms are that they are all posed the same, (marching), and they just don't seem to fit in well with other "28mm" figures, (IMHO). It must be remembered though that these miniatures are a "Private" venture, so the commissioner has stipulated that "Marching Troops" is what he wants. I suspect he also doesn't give a flying fig (no pun intended), if they don't fit in well with OLD GLORY or FOUNDRY miniatures. 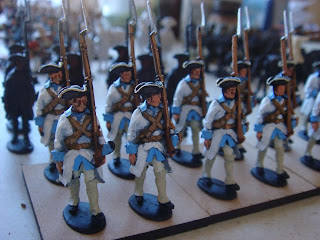 The other miniatures I'd like to show you are some delightful French and Indian War (FIW), Militia that I picked up by chance from Nic at EUREKA MINIATURES. I say "by chance" as it was whilst I was discussing some ideas pertaining to sculpting of 18th Century Artillery that I noticed on Nic's work desk one of these little guys. In short order I'd purchased about 26 of these little fellas who will be soon (I hope) painted up as a fictional Militia Unit for my Imagi-Nation, The Holy Mormoan Kingdom Of New Wales.
They are available in either "Marching" or "Firing Line" poses. As usual for EUREKA MINIATURES, there are some subtle differences within each pose, (about 4 within each "pose"). I couldn't find any reference to these miniatures on Nic's Website, but I'm sure you could get some if you either described them as FIW Militia, ("those figures with Tricorn Hats and hatchets in their belts,..") or point him to his blog! 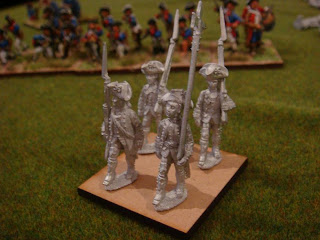 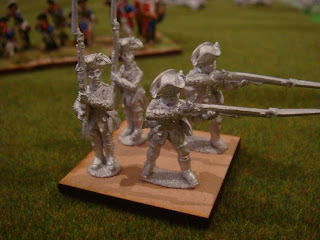 I was also lucky enough to pick up some of EUREKA MINIATURES soon to be released "French Revolutionary War" Austrians. I picked up three casualty figures, (including a drummer), two officers on foot, one mounted officer and a drummer and fifer. The French are fantastic miniatures, but so far (with what I've seen), I think the Austrians will be even better. I particularly like the Drummer that has been hit, (cannister or a well placed French musket ball the cause; your choice)! I was going to upload some pictures of the French, but go to the EUREKA website for a good look at the figures in the raw and painted form. Cheers for now! 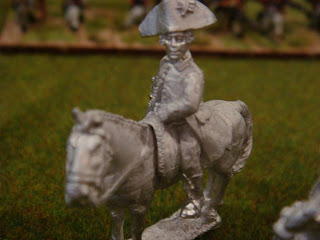 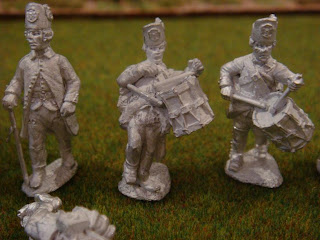 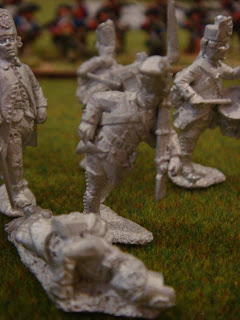