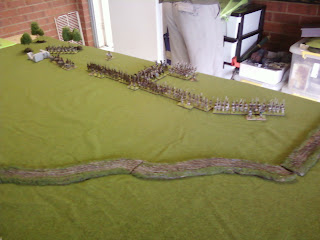 ABOVE: The Prussian defensive line.
Hi All
I've been away for quite some time, but here is some photos of a Lasalle game I played before I departed over seas. It was played over at my mate's place. Stan ran his 1813 Prussians against my French Young Guard Division. Yes, I did use some OLD GUARD minis as 'stand ins', ("oh the horror"). I just gave the 'Old grumblers' the same stats as if they were Young Guard. It was a great little battle, with the Young Guard eventually triumpant! Originally my plan was to smash my way through on Stan's right flank, but after that stalled I switched to trying to get through the center, which turned out to be successful. Stan did try to sweep around my right with his Landwehr Cavalry, but the resulting carange was lots of Prussian dead horses,..
BELOW: My YG Battalions roll forward towards the Prussian Line. Stan deployed a battalion facing the woods on his right, as opposed to deploying them IN the woods. The resulting delay in getting his lads through the wood did give me an opportunity to get close without to much hurt. 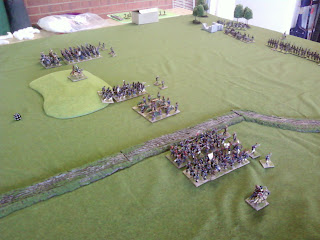 BELOW:Prussian Guns Blaze away at the advancing French. It was here on my left I used OLD GUARD Grenadiers and Chasseurs as Young Guards! Eeeeeeekkk!!! 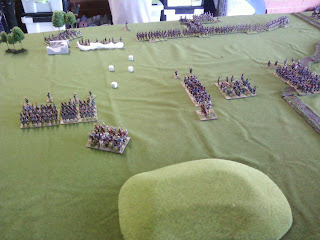 BELOW: The Prussian center crumbles! "On to Berlin"!
Here we see the Lancers of the Guard (Dutch 'Red' Lancers) bursting through. French Old Guard are capturing a battery, and Young Guard are standing their ground where a Prussian Battalion once stood. In the distance (my right flank) you can see YG Battalions advancing into the gaps where Prussians were,.. 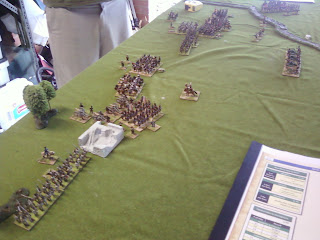 Sorry for the poor quality of the photos,..
Cheers for Now!
Posted by Trailape at 10:15 AM