Hi All
My friend Stan and I recently played our 4th game of Lasalle. Stan had just finished putting together a Prussian Division, so we decided on a 1813 battle with the Prussians Division with a Cuirassier Brigade in support attacking a French Division supported by a Light Cavalry Brigade.
I won't go into a detailed game report, (I just don't have the time I'm afraid); but briefly here is what happened.
BELOW: The French deploy with the Division roughly in line, with the Prussian 'Objective', the building at the end of the road, (in other words, "Drive ze Frogs avay from ze crossroads, schnell"!). 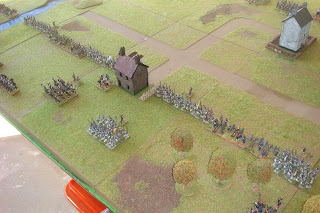 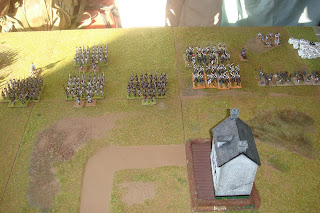 Above: A section of the Prussian deployment.
The French deployed with the division in line with the sole 'Veteran' Battalion in reserve to the left of the objective and another battalion of conscripts to the right. All but one of the French battalions were Conscripts! The bulk of the French Light Cavalry Brigade, (Lt Bde), was on the opposite side of the river, with the Unit of Hussars just to the left of the Veteran Infantry. The French Commander placed himself in the center, near the house (objective). The two French Divisional Batteries were positioned so as to break up any assaults that would fall on either the center or right flank. The Horse artillery was deployed on the left bank of the river, together with the two units of Chasseur.
The Prussians massed mostly in the center, (intent on smashing through to the objective I suspected). The two Line Infantry battalions were to lead the assault, with three Reserve and three Landwehr Battalions in support. Von Crabbe (Stan) beefed up his Skirmishers from two of the Reserve Battalions with Shutzen light Infantrymen. He placed his Landwehr Cavalry on the opposite bank of the river, facing my Lt Bde (- the Hussars).
His Cuirassier Bde, which included some Saxon Cavalry and Horse Artillery that had changed sides at Leipzig, face my right flank. The ground was covered in a thick mud, and this was going to slow the sausage eaters down, "Bravo"!
Below: The Prussian's advance! Napoleon's daughters say "Hello". 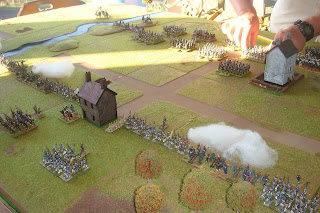 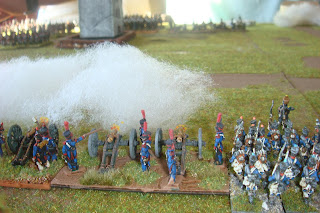 Above. The French battery on the right flank open fire on the Saxon Guns. The French gunners got the better of the exchange, and forced the Saxon's to limber up and move back. Above: As the Prussians advance on the Objective, the Battery on my right prolongs into a position to pour fire into the Prussians.
In short, the Prussians advanced on the objective under a hail of artillery fire. Eventualy both Regular Prussian Line Battalions were destroyed by a combination of Canister and musketry.
The real heros for Von Crabbe turned out to be a Reserve battalion and a Landwehr battalion that routed the two French Conscript Battalions on the left and right of the objective.
Below:The French Veterans await the order to counter attack. 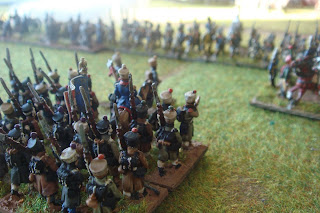 Below: The Prussians are catching buckets of canister! 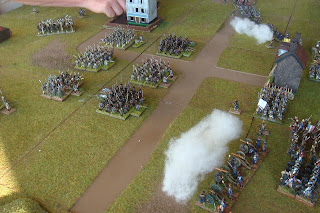 In the end the Prussians ran out of time, with the night came the order to withdraw. So close, but not close enough. 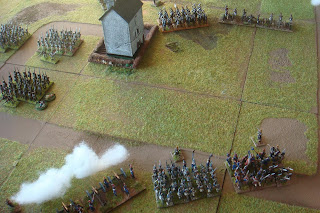 Above: The French right flank swinging in. The Saxon Gunners did their best to pound the French conscripts on the extreme right, but just kept coming up short of breaking them. The French commander consistently rallied off the disruption. 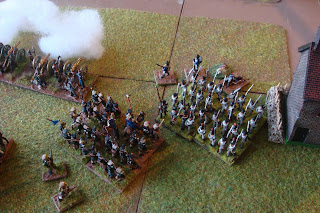 Above: The Prussian Reserve Battalion breaks though, and is then confronted by the French Veterans.
Below:The moment when the Landwehr Battalion enters close combat with the French battalion on the right of the objective. 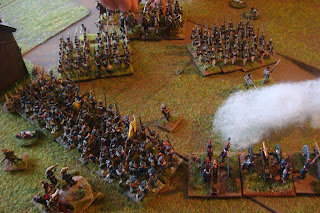 Below: End Game. The Prussians haven't managed to secure the objective, with the French Veterans deploying into line as night falls. 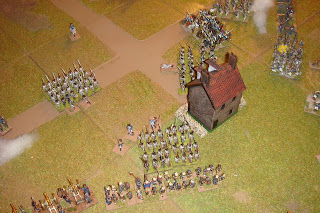 Below: The French Right Flank at game's end.The Landwehr have routed a French battalion, and the Saxon Cuirassiers and a Reserve Battalion arrive in support. Unfortunatly the French Battery and three French Battalions are still full of fight. 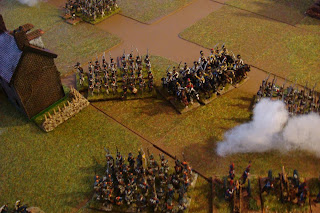 A great game, and a 'close run thing' in the end. The Prussians were painted by Fernando Enterprise. The French 'Conscripts' were painted by Reinforcements By Post. The French Artillery were mainly painted by me, as were the French Veterans, Prussian Artillery, Skirmishers and Prussian Commanders. The French Hussars and Saxon Heavies were painted by Model Citizen Miniatures.
Another fun Lasalle game. I apologize for some poor quality photos.
Cheers
Posted by Trailape at 9:32 PM

Really nice photos. It would be nice to see a post discussing how you made those terrain squares.

Excellent as always sir, your blog is a go-to of mine when I'm in the painting or gaming doldrums!

Hi Rolland
Thanks for the comment!
We do our best to please,...

I just wanted to say, that I absolutely love your Lasalle battle reports, they are brilliant! I have Lasalle and my mini's are based for AOE, Lasalle or GdB but opponents around my parts are few and far between. If I was into 40k or WHFB I could through a rock and hit 10 people but Historical's...Hah Anyway great work, I love you mini's as well!