Hi Team
It's been a few months since I played a game of BLUCHER so Rowan and I decided to have another game.
We settled on 250 points each and Rowan commanded a Russian Army consisting of:
1. Guards Corps of Grenadiers, Heavy Cavalry and Massed Artillery,
2. Corps of Cossacks, and;
3. 2 Infantry Corps with Massed Artillery.

I commanded a 1814 French Army of 3 Infantry Corps, (one heavy with ‘Marie Louise’ Conscripts) and a Cavalry Reserve Corps. The Cavalry Corps and the 1st Infantry Corps were each blessed with a Brigade of Horse Artillery (both were to do sterling work on the day). 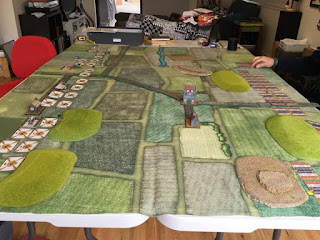 Above: The Troops deploy. The Blucher system of using Cards for deployment really goes a long way in creating that 'Fog Of War' feel so often missing from miniatures games.
Below: The French Deployment left to right:
2nd Corps: Mainly Conscripts with a single Brigade of Light Cavalry in support.
3rd Corps straddles the road, consisting of 'Marie Louise' conscripts and a Brigade of Lancers. Behind the hill in the centre is 1st Corps with the bulk being 'Veteran' Infantry and a Brigade of Hussars and massed Horse artillery. On the far right is the French Cavalry Reserve with 4 Brigades of  Cuirassiers and a massed Horse Artillery Brigade. 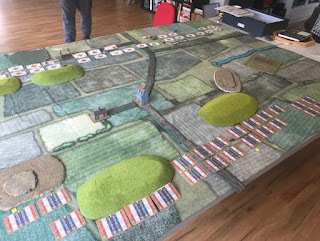 The French were able to get a localised advantage over on their right flank by ‘Reserve Marching’ (a swift redeployment) of the Reserve Cavalry Corps against the Cossacks. The Russian Guard Cavalry attempted valiantly to come to the aid of the scruffy Cossacks but were brutally handled by the French Cuirassiers and Carabiners. 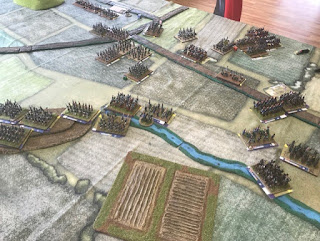 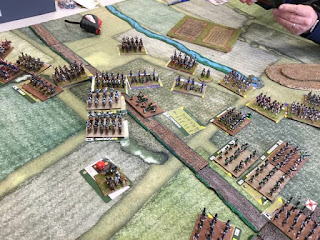 
This was surprising really given the superiority of the Russian Guard Cavalry being one point of elan stronger and having the 'SHOCK' trait. The French 'Heavies by 1814 are on poor mounts so only have an 'Elan' of 6 and no 'Shock'!
As this was going on the Russians on their right under Barclay d’Tolly advanced on the French left and the two garrisoned Villages.
The French on THAT flank had a concealed Corps around some hills and d’Tolly seemed cautious and deployed his Corps into ‘Prepared’ (Squares and Dense Columns) as a Brigade of Chasseurs a Cheval hovered nearby.

As these events unfolded on the flanks the French advanced their 1st Corps which was predominantly veteran infantry supported by a Brigade of Hussars and a Massed Horse Artillery Brigade advanced in the centre. 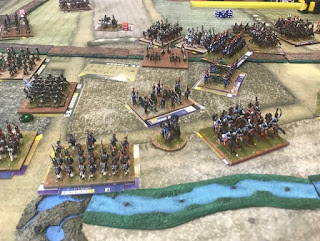 ABOVE: Top right of the photo we see the French Cavalry Reserve clashing with Russian Guard Cavalry as the Hussars, Horse Artillery and Infantry of 1st Corps strike the Russian Infantry redeploying

As the Russian left collapsed and centre was threatened d’Tolly and the Russian Grand Batteries spurred into action and captured the two villages! 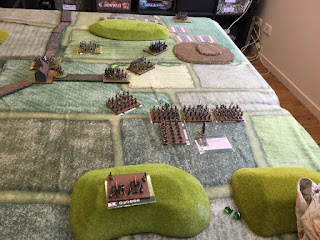 ABOVE: Barclay d'Tolly's Corps advances but seems (from the French perspective) wary of the undisclosed French Brigades beyond the high Ground,... "Is that the French Imperial Guard? Is napoleon on the field"?

But the losses on the left and the rupture of the centre was enough to convince the Russian commander Marshal Kutosov to call it a day. 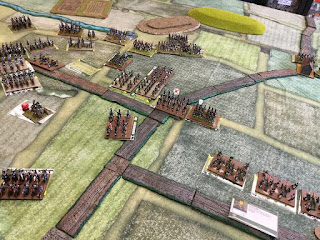 A great game where the dice rolls went the French way at the critical moments.
I also think my 'clearer' recollection of the rules (such as Reserve Moves) helped.
We did a couple of things wrong in regards to the rules but nothing major.
It's worth noting we used the excellent 'Scharnhorst' campaign system to create the battle which is fun in itself.
A rematch is on the cards! 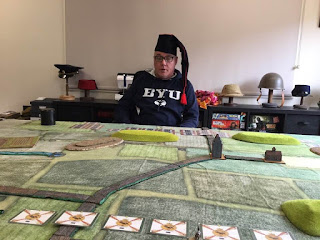 ABOVE: A contemplative French Commander contemplating why he has on such a ridiculous hat
Posted by Trailape at 6:11 PM

Blucher is a good set of rules, nice AAR and good set up.
Thanks for posting!
Is that a hat/helmet for every period of game you play in the background of the last pic 😊?

May I upload one of your pics to Wikipedia, for the articles on miniature wargaming? Would you release this pic to the public domain?


This is lovely. keep it up.This is so lovely.

Thank you so much for the information. i appreciate it very much. Very good post.


Great Article it its really informative and innovative keep us posted with new updates. its was really valuable. thanks a lot.

the very entertaining game I wish I could play again...Kinemaster diamond

Uttarakhand Board Of School Education (UBSE) Responsible For Conducting 12th Annual Examination Starting 12th Class Exam might begin on May 4 and might end on May 22, 2021, UK Board 12th Question Paper 2021 UBSE is an company of Government of Uttarakhand entrusted with the Responsibilities of Prescribing courses of instructions.