BELOW: two views of Napoleon and his Household at Boridino 1812.
Painted by Model Citizen Miniatures, based by Trailape. Napoleon broods as Berthier dictates orders! In the background the Old Guard waits, (and grumbles). 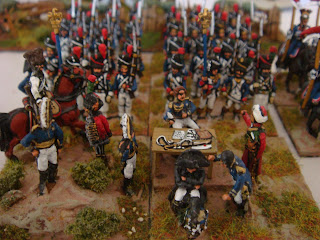 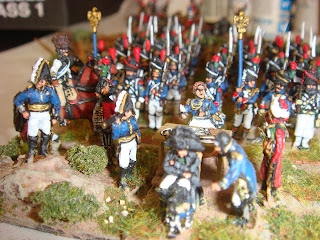 Let's now review the offerings from Fernando Enterprise:
They were the last to arrive. They took about 5 months or so to return to me from time of dispatch at my end to their eventual return.
I asked for about 10 different units to be painted to "COLLECTOR" standard. This is one level down from what I've asked the other painting services to do. The only reason for this was that to have them painted to "SHOWCASE" standard was going to take a rather long time. As it turned out they still took a month or so longer than expected.
I did send about 300 figures!
Packaging:
VERY GOOD. I'd have to give them a 8.5/10.
Most of the figures were packed and wrapped in foam, (but some were simply placed in individual zip-lock bags and the placed in larger plastic bags. The lot was then packed buy Order Lots (regiments) in boxes lined with tissue and bubble wrap. I dropped the boxes a couple of time and no harm was done. These could easily take the normal Postal Service poundings. All the same, a couple of Bayonets did snap off.

Accessing the figures from the packaging was easy, with little chance of the customer damaging the figs in the process of un-packing!

(Trust me, it happens)!
PAINTING:
As for the figures themselves; they were painted to a rather high standard.
They were painted with some shading and highlights. We did have some issues with the occasional unit; (I thought for a while there we'd never get my Provisional Croation Regiment painted

); but other than that the uniforms were on the whole historically correct as far as I could tell.
The only other issue is that one regiment has the Fusiliers (center Company's) with red cord on their Shakos, (should be white). A minor pain, (and all the other units have the correct white cords on the Fusiliers.
As I did ask for a "Collector standard" I'll give FE a 7 out of 10.

VALUE FOR MONEY:
These guys were the cheapest figures to get painted, (obviously as they were painted to a "lower" standard in comparison to the other painting services).
Having said that, they were not that much off the mark in comparison with the other painters.
So on the Value For Money scale let's hand FE a 9 out of 10

Finally, a customer service score is now required. Communication was a slight issue. The saga of getting the Croats painted is a good example of what I'm talking about. The figures also took quite a while to get to me
Lets give FE a 6.5 out of 10.

That gives FE a total of 31 / 40.
In summary; I'll be sending more figures FE's way.
I must stress though it's VERY IMPORTANT that you provide as much detail in your painting instructions as humanly possible. Don't assume the artists can tell the difference between a greatcoat and a jacket. The best option is to send a painted sample of what you want done, and/or as many detailed pictures as possible.
I recommend using pictures available from the Histofig site:
http://empire.histofig.com/-Armees-et-Uniformes-.html?lang=en
Anyway, here are a few pictures of the work done by FE:
Italian Royal Guard (top) and Velites of The Guard (below). 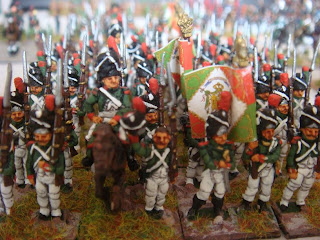 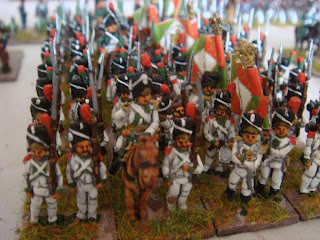 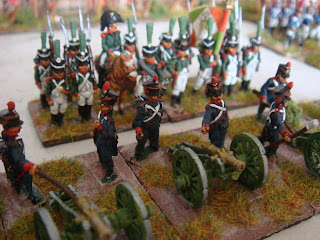 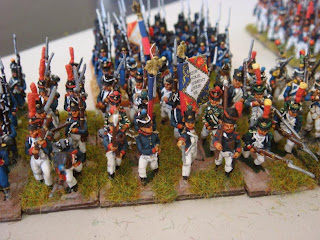 Above is the Guard Conscripts of the Italian Royal Guard behind a battery of French Foot Artillery and below is a French Line Regiment. All painted by FE. Based by me.
I'll soon provide a review of our last Service Provider, Reinforcements By Post (RBP); and a final SIDE BY SIDE look at the work done.
Cheers

What FE painting standard are these figures? Wargamer, collector or showcase?

Hi Peter
I asked for about 10 different units to be painted to "COLLECTOR" standard.
On reflection, I would just as happily had them painted to "WARGAME" standard and then just Dipped them in Army Painter Strong Shade dip.
Cheers