Chain Of Command at CANCON 2014 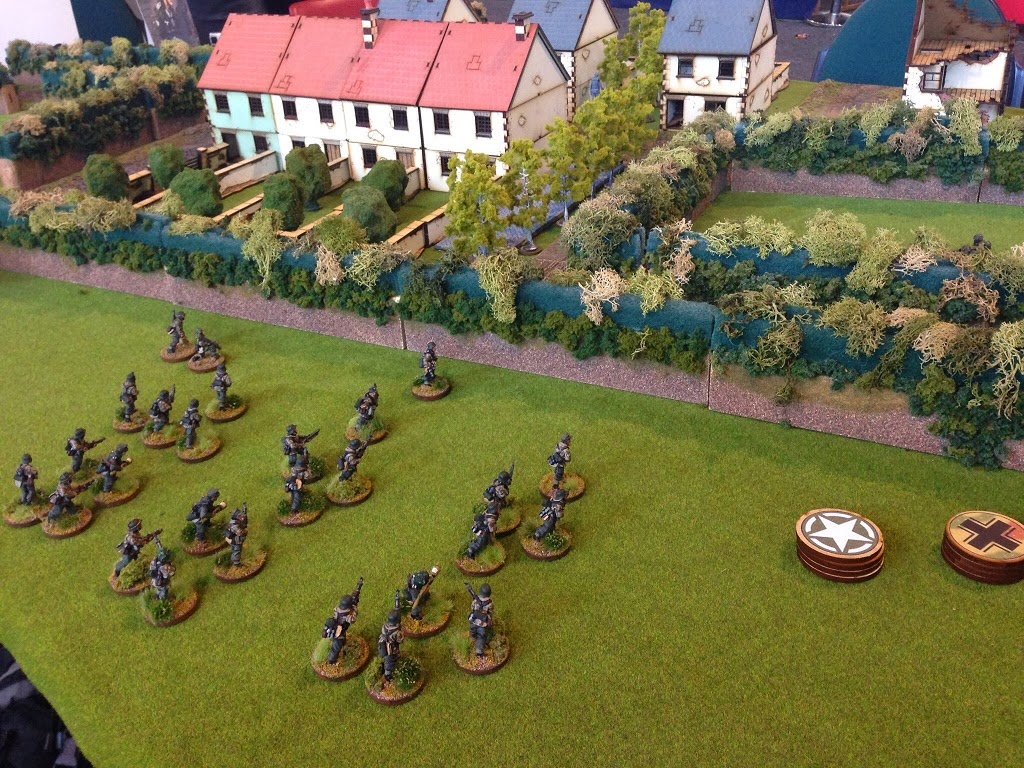 ABOVE: My forces for the game

I was fortunate enough to play a CHAIN OF COMMAND participation game at CANCON.


What follows is an AAR from my (The German Army or Heer) perspective. 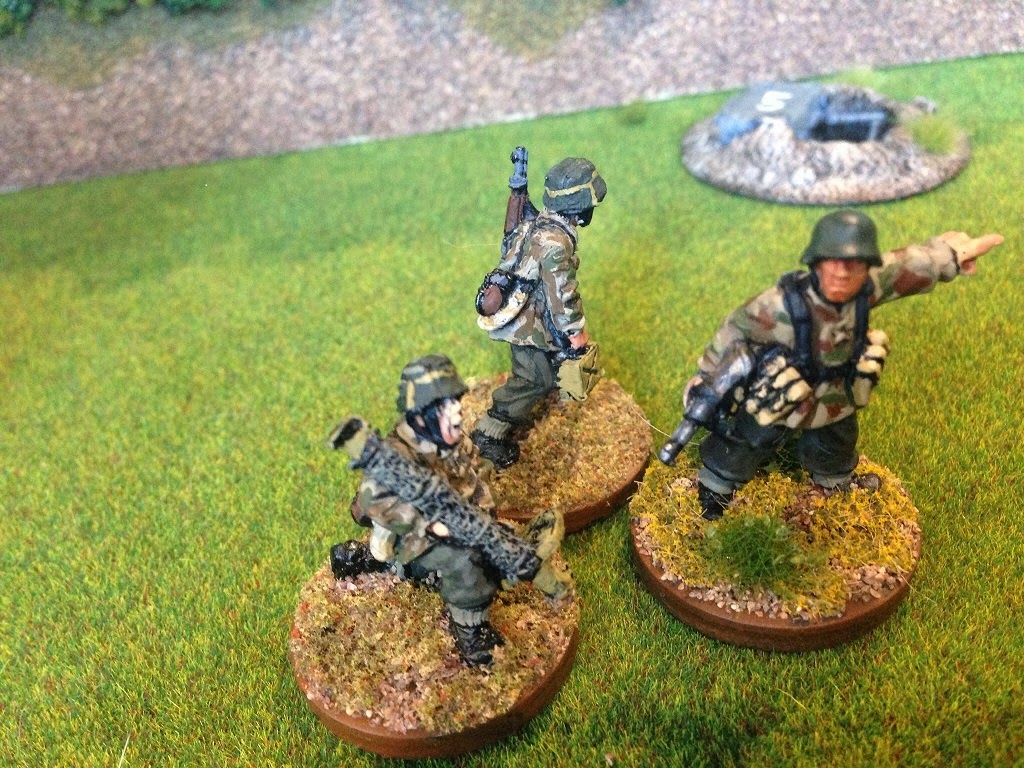 His unit had been fighting for the last week against American Paratroopers and had suffered some casualties. Each of his 3 sections had been reduced to a MG42 LMG team of 3 men and 4 riflemen with a panzerfaust. CHQ had offered up a Panzershreck team and these two soldiers where his main defence against an armour that might link up with the American paratroopers from the beachheads of Normandy. Hopefully it wouldn’t come to that.


The small hamlet of Le Epic seemed empty. The little terrace houses and their small enclosed gardens looked peaceful enough nestled in amongst the bocage that surrounded it.


“Unteroffiziers Schmidt and Paulus, take your sections and secure the first two houses on the main street. Obergefrieter Gobel, take your section along the line of bocage and await further orders. I will keep the Panzer killers with me. Move out”!


With that sections one and two occupied the two buildings on the western end of the hamlet on the south side of the road. 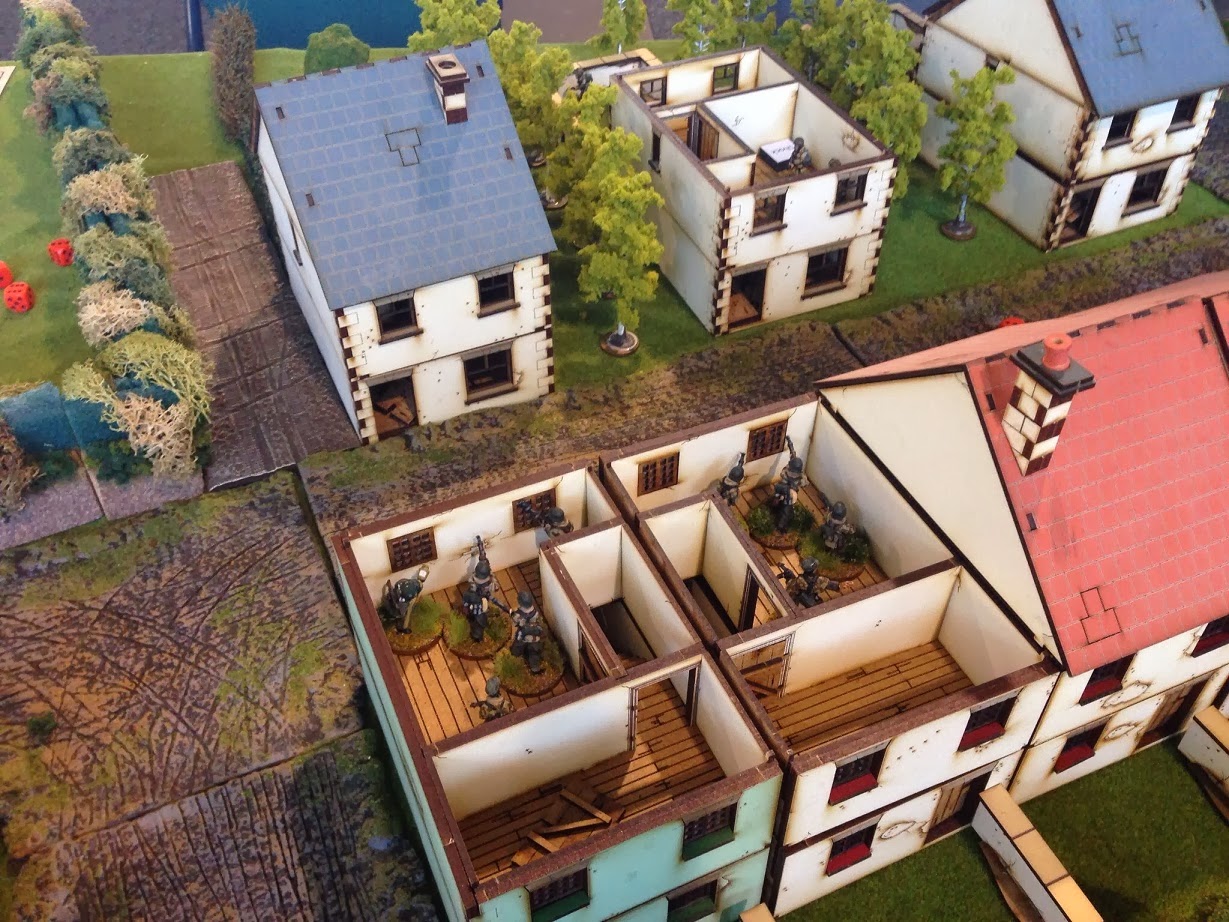 ABOVE: The German Sections secure the two houses
Obergefrieter Gobel’s section was slower to move off. The familiar and terrifying sound of a 60mm mortar firing caused them to pause.


At the north east end of Le Epic American Paratroopers from the 82nd were advancing into the Hamlet. One squad rushed into the house almost opposite number 2 section. Just as Unteroffizier Paulus’ men open fire on the ‘All Americans’ across the road a mortar round crashed into the roof above them killing Private Brand and causing the rest of the section to become concerned (suffering a point of ‘SHOCK’)


GAME NOTE: When a section, team or squad have more shock then members they become ‘Pinned / suppressed’ Once they have twice as much ‘Shock’ as members they rout! 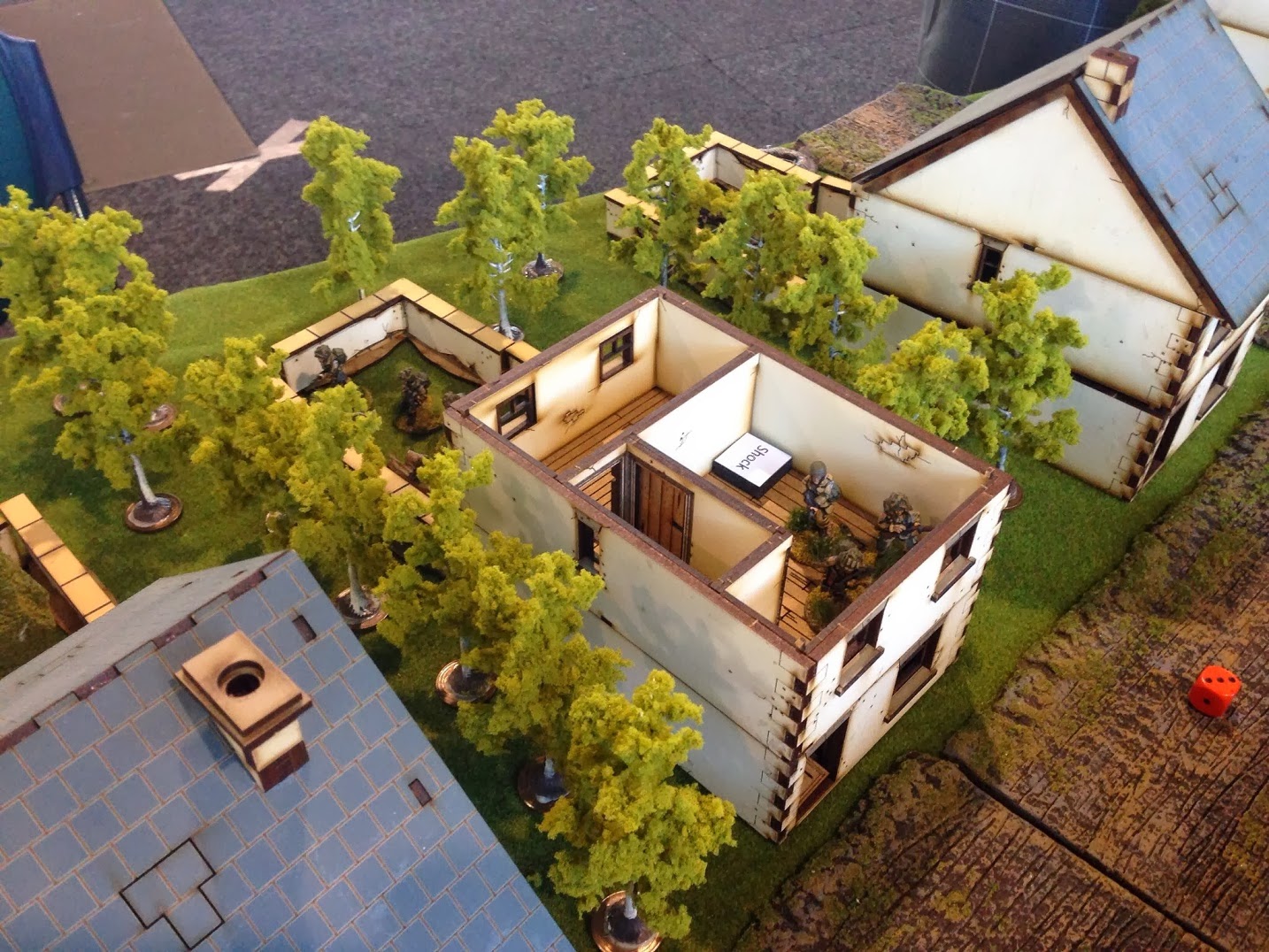 ABOVE: The American Paratroopers take fire from Paulus men, and;
BELOW: Paulus men suffer a casualty and some 'SHOCK' from the Paras and their 60mm Mortar. 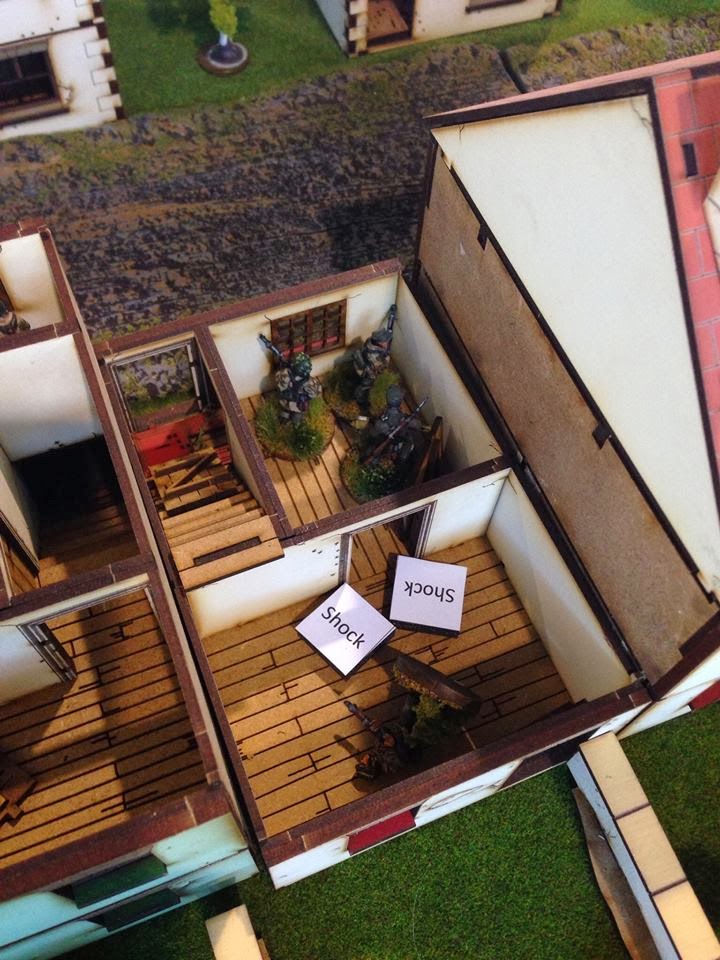 Unteroffizier Paulus started kicking some butts and the fire that his section poured across the road at the Yank Paratroopers across the road was very effective killing or wounding half the Americans.


Shorty an uneven firefight erupted between the two German sections and the now much depleted American Paratroopers. A Panzerfaust shot across the road sealed the Yanks fate and the three survivors fled out the back of the house into the part of the Platoon Sergeant who rallied them.


Whilst this was happening Obergefrieter Gobel’s section was moving east along the bocage in an attempt find a flank to work around, and towards the sound of the American 60mm mortar that was continuing to drop round after round of HE on the two Heer sections in the houses at the western end of town.
Now Leutnant Hans Meashmizer entered the battlefield with the Panzershrek team. They halted in the walled garden behind Unteroffizier Paulus’ house. “Franke, take Hessmann with you and cover down the road for the approach of enemy Panz,…”

Both Franke and Hessmann were both killed instantly and their Panzershreck fell in amongst the tomatoes and beets in the garden. As masonry and twigs flew all around him Leutnant Meashmizer dashed for and reached the relative safety of Paulus’ house. Only to find Paulus section dashing out the front door in an attempt to secure the house that was vacated by the broken and fleeing Americans. Paulus’ men stacked up outside the house in preparation of entering. 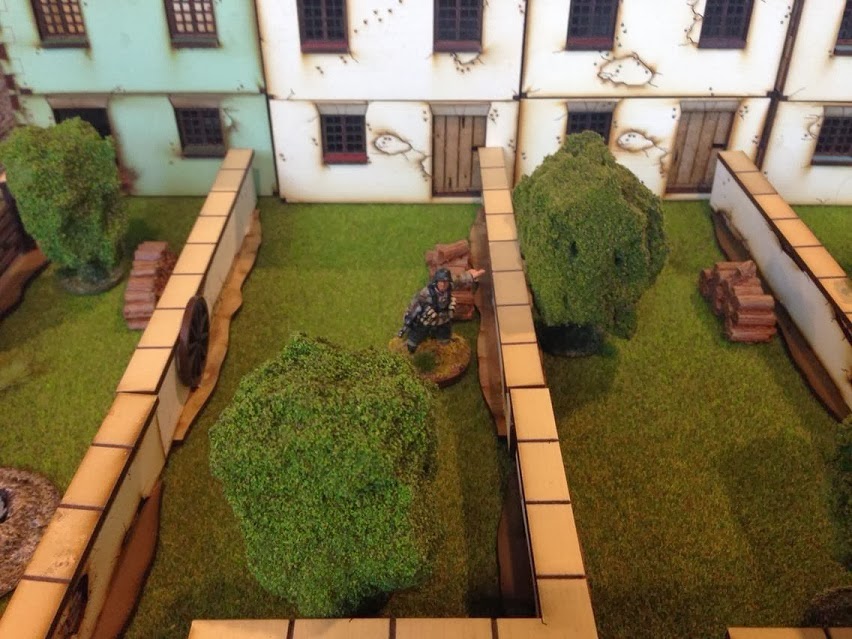 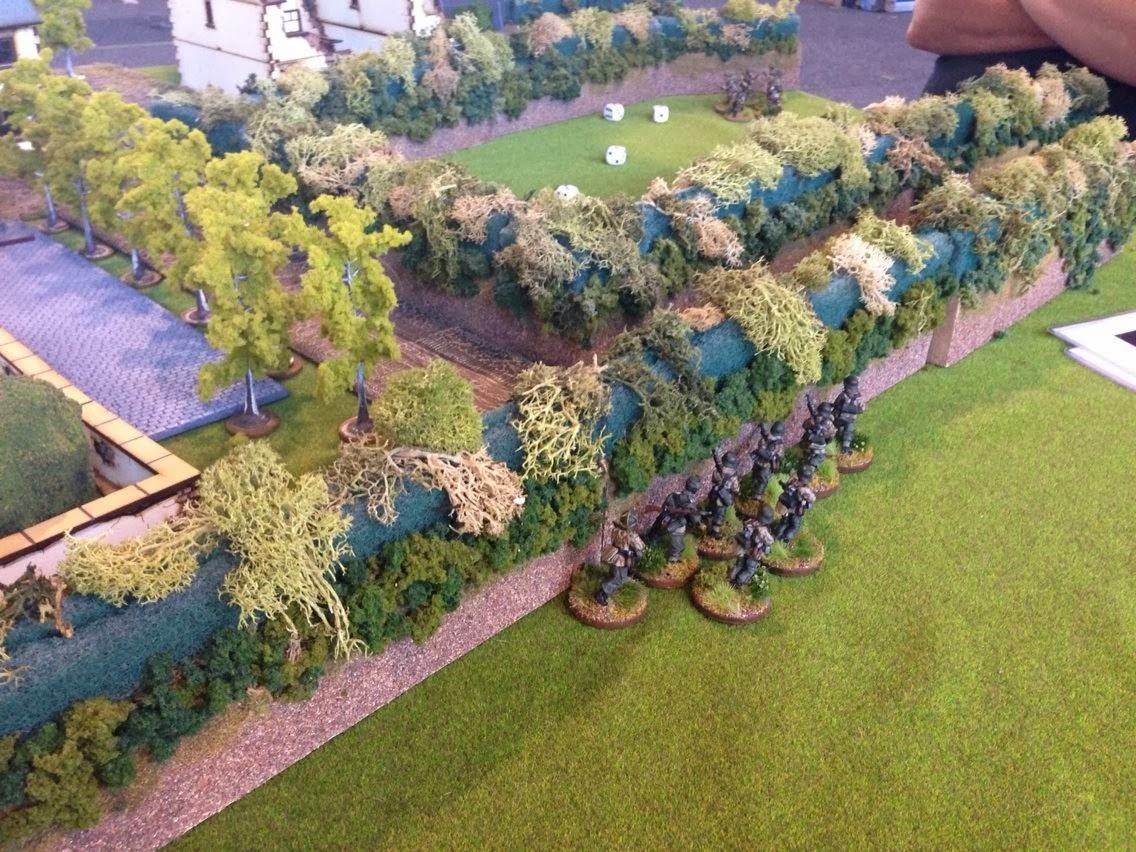 ABOVE :Obergefrieter Gobel’s section moving east towards the sound of the mortar firing.
As this was happening another American squad and a bazooka team was attempting to move to the west and dashed across the road heading north and propped up against the side of the bocage,… the wrong side of the bocage. Unteroffizier Schmidt’s section blazed away and wiped out the majority of the Paratroopers. Only the Bazooka team managed to get over the bocage to relative safety. The three surviving Paras went back the way they cam and hunkered down in a garden behind a house.


Maybe it was the close call or maybe the rain of 60mm onto the house Leutnant Meashmizer was sheltering in but a paralysis overcame the German command.


GAME NOTE: My opponent stung together two phases of double 6 rolls, them played a CHAIN OF COMMAND (CoC) die then we had a ‘Random Event’ where ‘JABOS’ appeared overhead that resulted in everyone not moving. 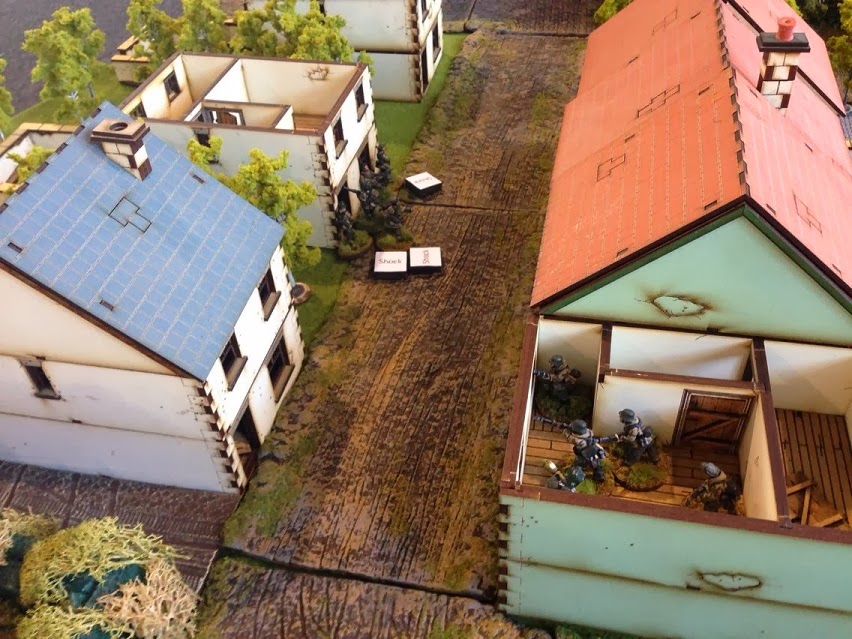 As Paulus men prepared to enter the house the Americans had vacated Yank Paratroopers at the northern end of the bocage that had just wiped out the P’shrek team now blazed away at them. The 60mm mortar also dropped a round on them. Only Paulus and two of his MG42 team made it inside. They managed to get their LMG into action and finished off the three remaining Paras that Sergeant Rock had rallied. At that same time Schmidt’s section crossed the road and occupied the house opposite them.


Obergefrieter Gobel’s section arrived opposite the bocage the American squad to the east had been using to cause so much carnage and managed to get the drop on them
GAME NOTE: I played my CoC Die and interrupted the American’s turn. 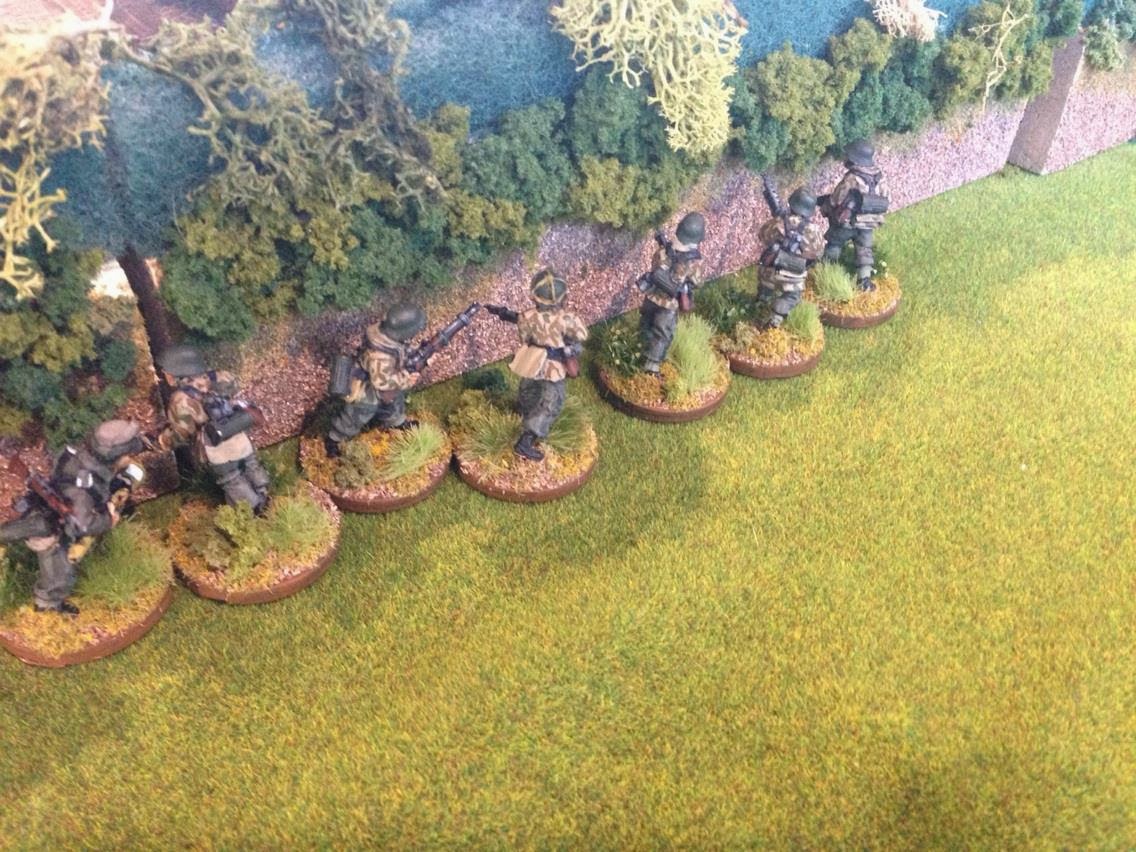 ABOVE: Obergefrieter Gobel’s section arrived opposite the bocage
BELOW: The Yanks suffer the consequences of being surprised 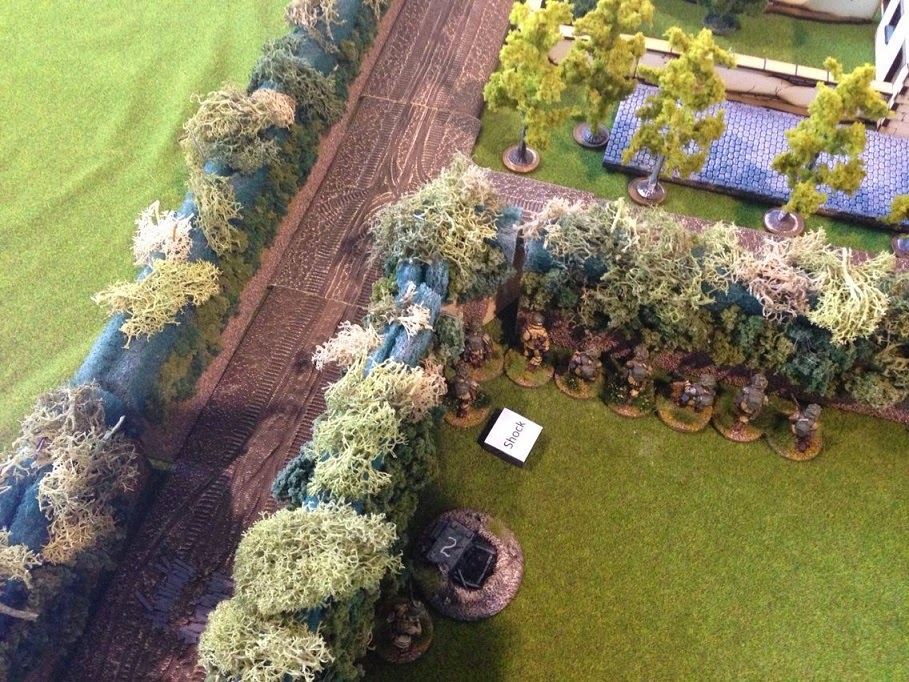 Grenades sailed over the bocage onto the Americans followed by a hail of Rifle, SMG and LMG fire. Killing or wounding 4 Americans.
The Mortar shifts its fire onto Paulus and his LMG team.

The American SNCO SGT Rock called out to the three Paras lurking in the garden to lay down a suppressive fire onto Paulus’ and his two Machine Gunners before hurling a grenade and assaulting them. Amazingly he killed all three Germans and recaptured the house! . 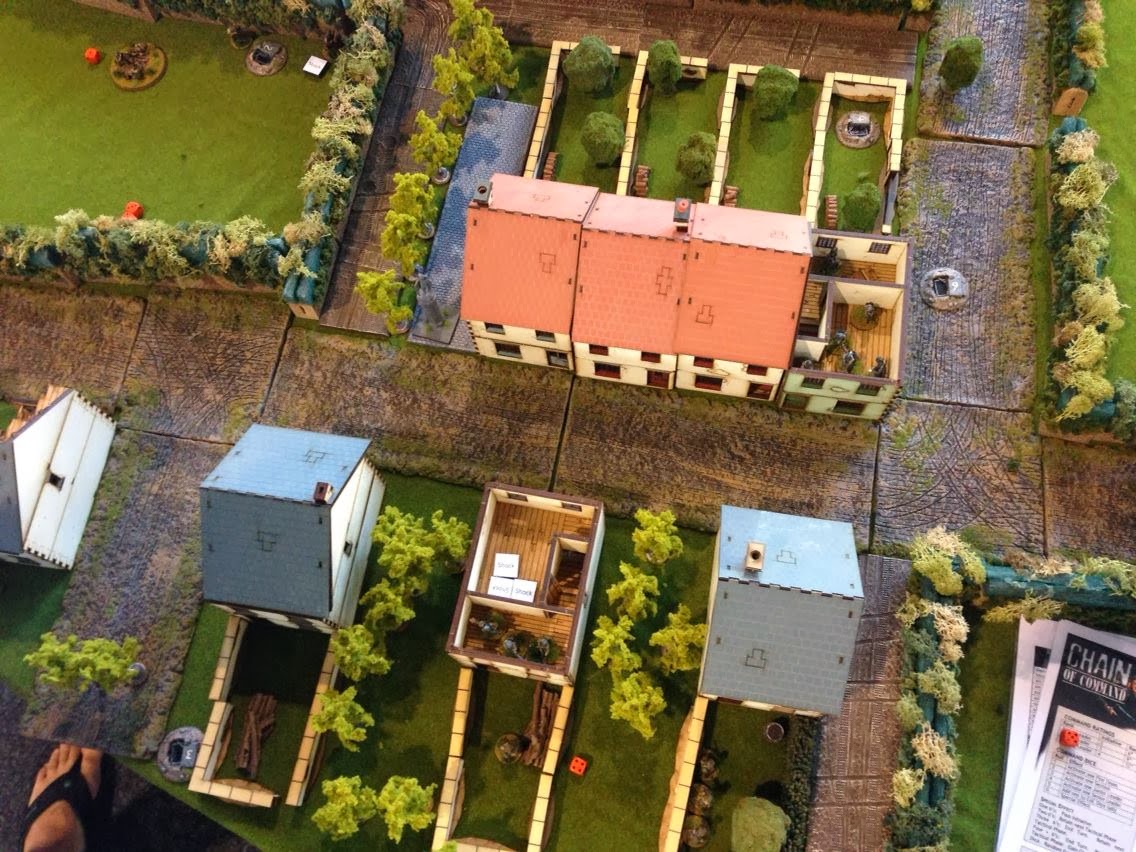 BELOW: The Three Yank Paratroopers who laid down the suppressive fire for SGT Rock's charge! 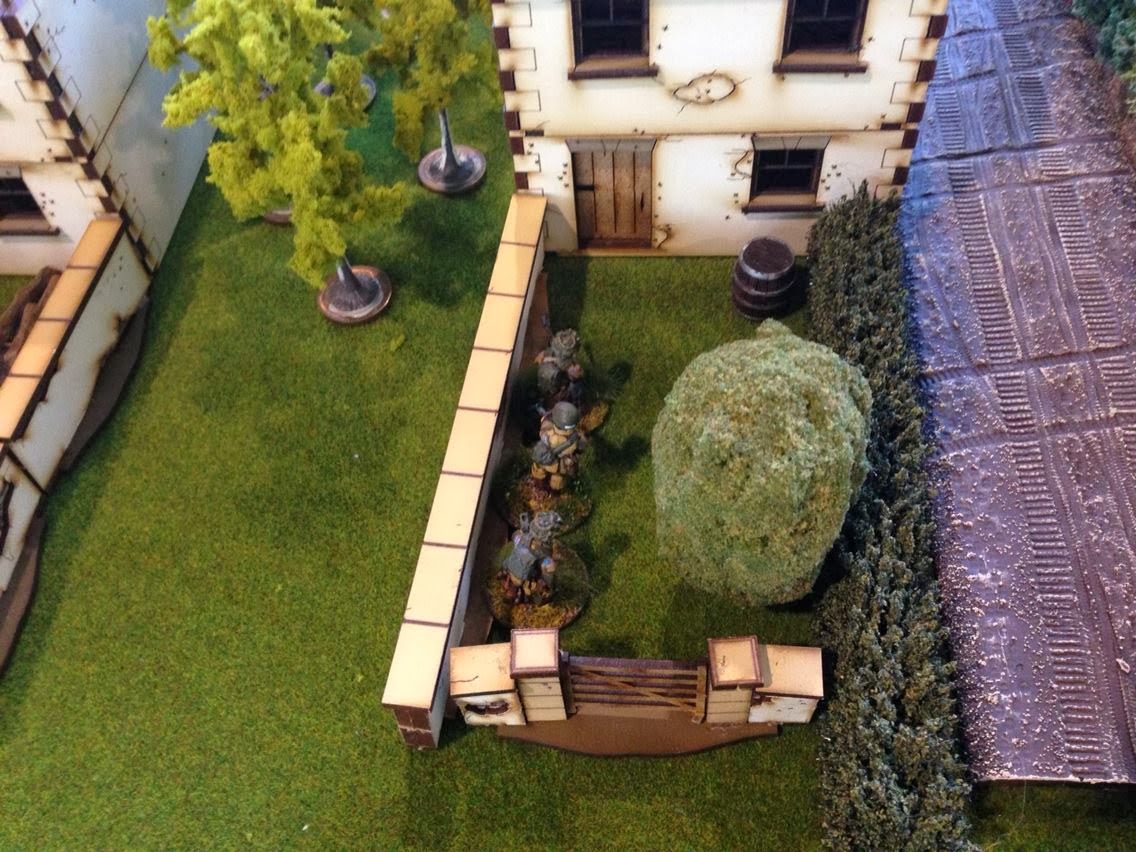 BELOW: SGT Rocks Assault! THE PLAN! The thin red lines represent the 'Support by fire' from the 60mm Mortar and the three paratroopers in the garden. The narrow arrow is SGT Rocks assault. The thick red arrow is Schmidt's dash across to road into the house. 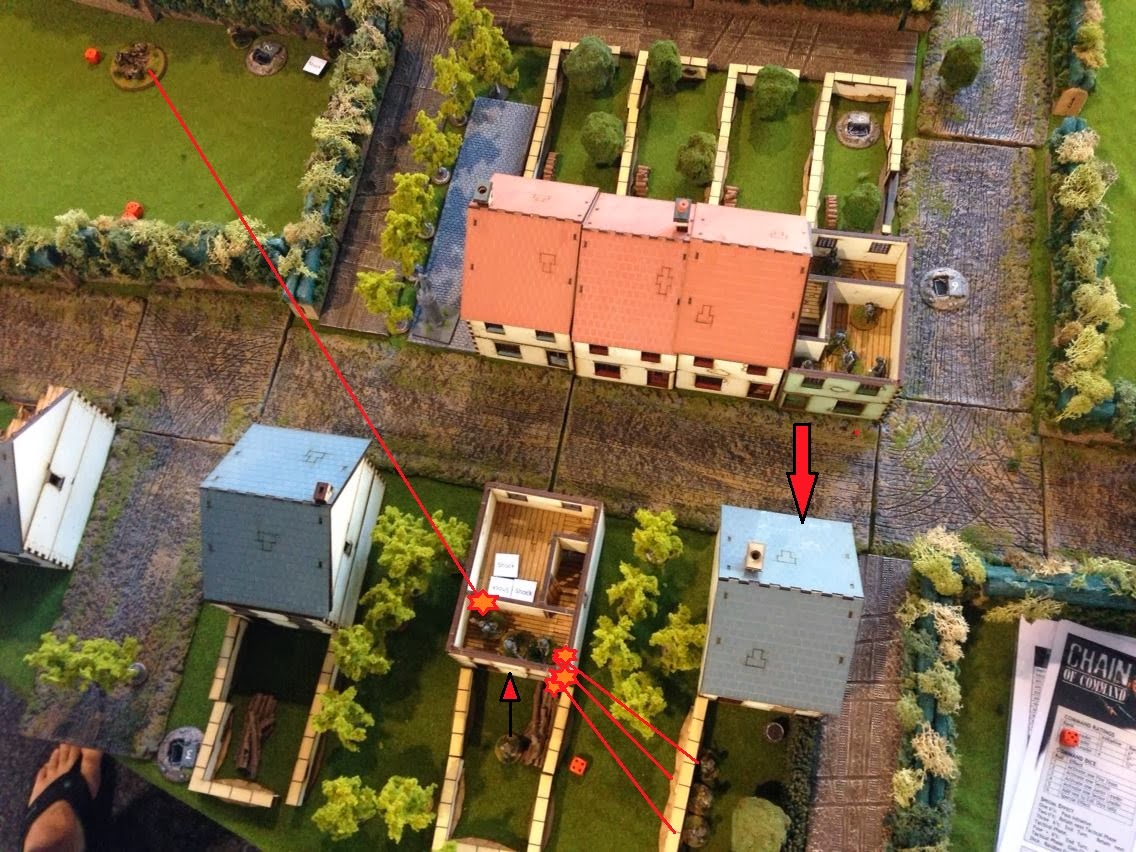 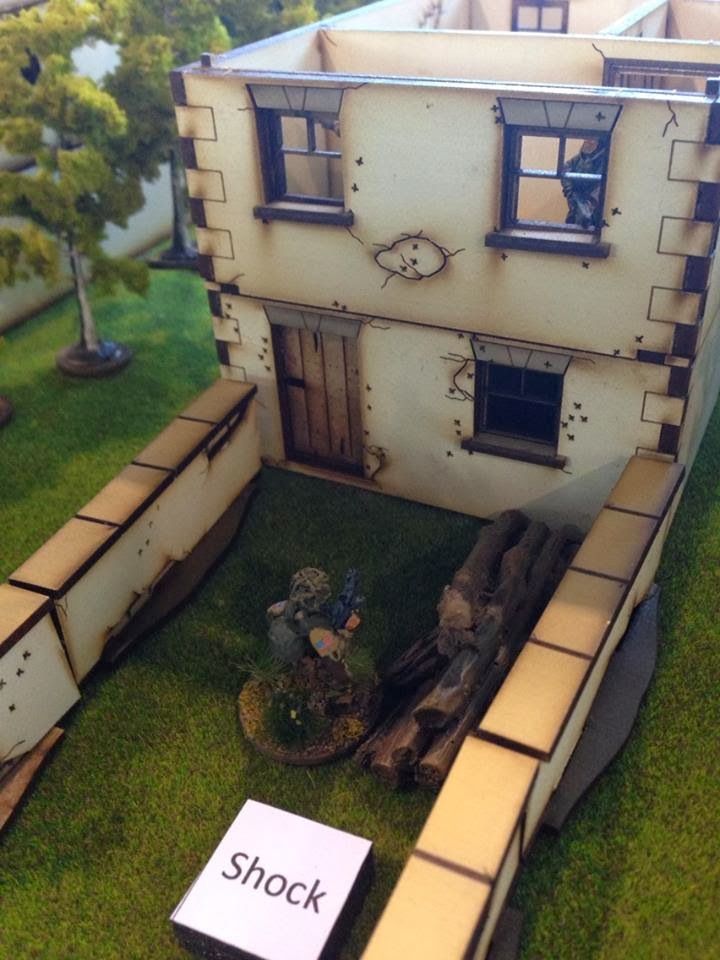 ABOVE: SGT Rock prepares to assault Paulus and his two man LMG team!
BELOW: The victorious SGT Rock 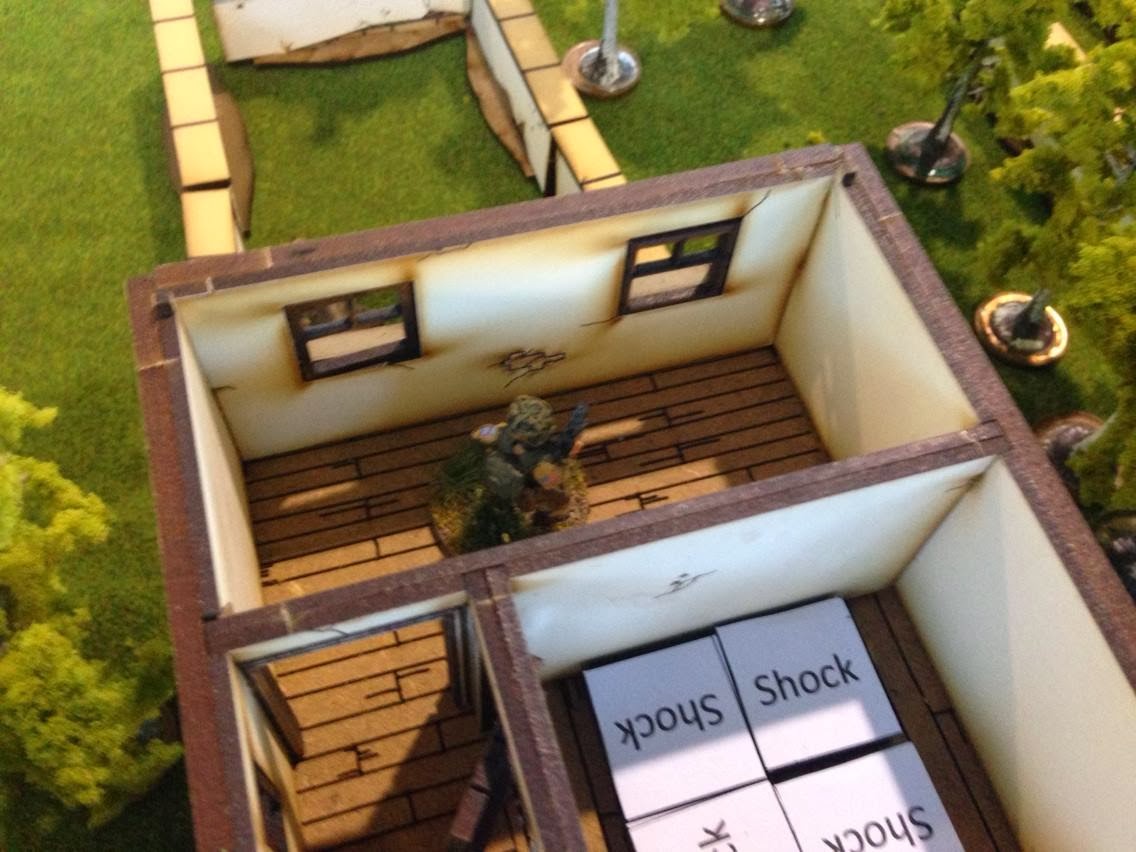 Feeling embolden by SGT Rock’s heroics the three Paras rushed into Schmidt’s house only to be wiped out.

BELOW: Schmidt's men seize the house on the northern side of the road and dispatch the three brave / foolish Paratroopers. 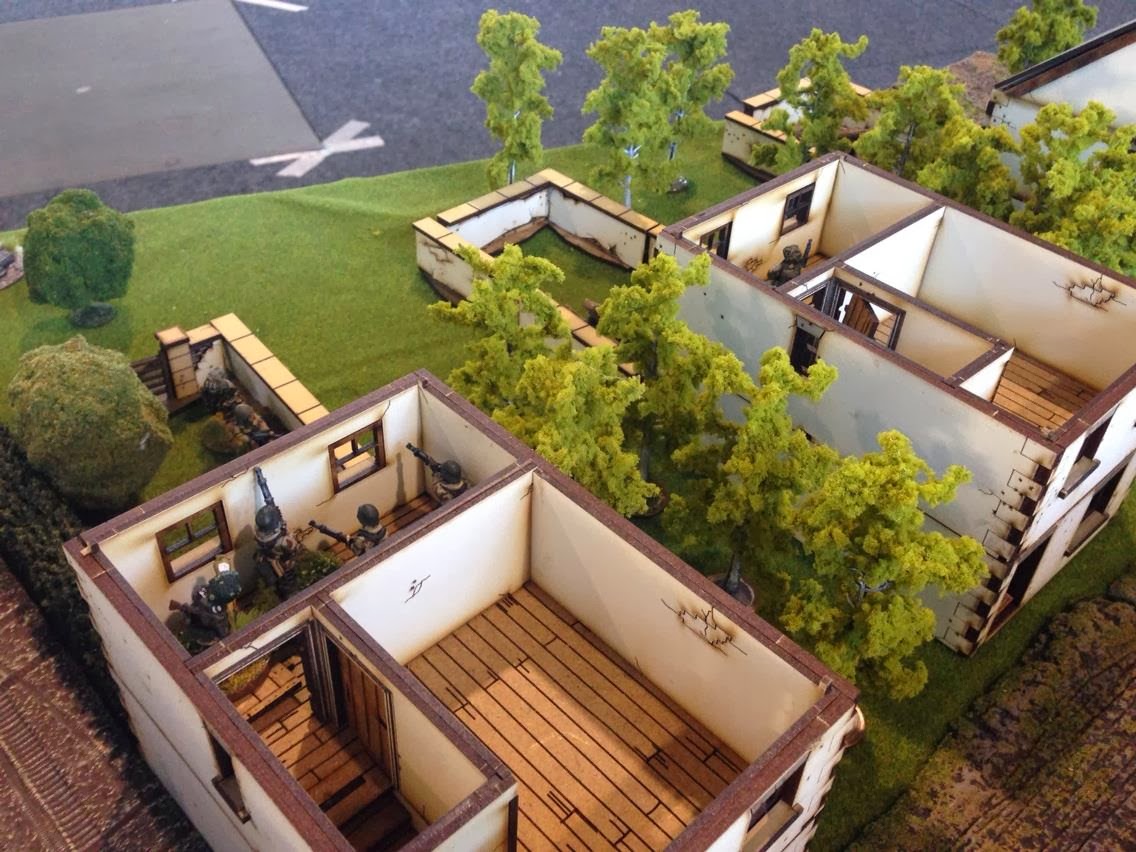 From their now digs Schmidt's men engage and kill the Bazooka team. The American moral is now very low and only one point away from breaking!

Obergefrieter Gobel’s section continued to engage in a vicious firefight with the Paratroopers across the road and behind the bocage eventually coming off second best when the Obergefrieter is stunned and unable to rally off any shock. 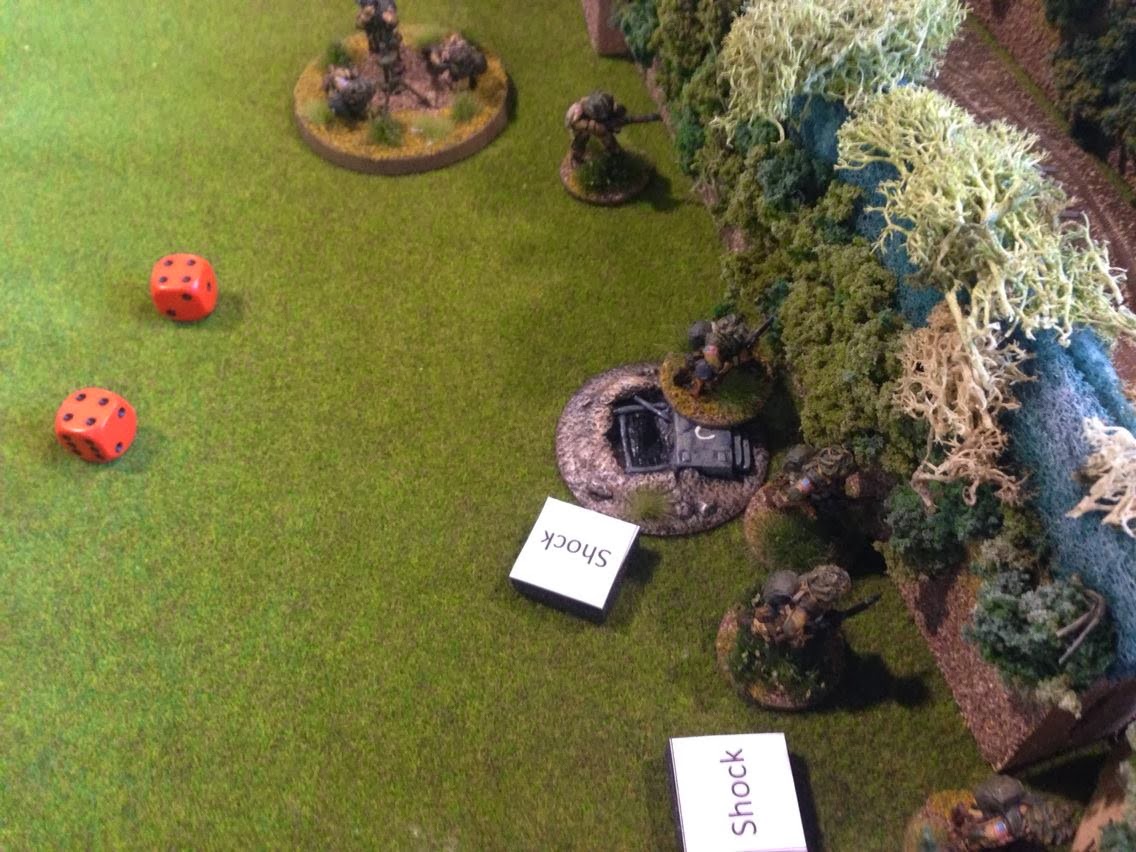 Leutnant Meashmizer then decides it’s up to him to storm the house occupied by SGT Rock. SGT Rock decides to meet the German officer in the street and like some scene out of Saving Private Ryan they both kill each other.


At this point the game ends with the German Moral at 0 and the US moral at 1. Both sides are pretty much destroyed.
SUMMARY!
What a FANTASTIC game! CoC is without doubt one of the most realist WW2 / Modern skirmish games I've ever played. It plays quickly, easily and if you employ historical / real tactical doctrines you will be rewarded with a very enjoyable and historically accurate game.
My two biggest blunders were sending Paulus' section across the road without first ensuring it was safe to do so. No smoke was thrown to cover their crossing, and the whole section crossed when really I should have sent across only a team at a time. A rush of blood saw the section lose half it's strength. I should probably have sent Schmidt's section across the road at the same time and by team bounds.
Blunder number two? Assuming my P'shreck team and Leutnant Meashmizer were in a secure position resulted in a near disaster. Losing the P'Sheck team was a bitter lesson. Never assume anything unless you absolutely have to.
Unfortunately for me the firefight with the American squad behind the bocage came down to poor firing by my guys and the JNCO being taken out of the fight. Without his leadership the section soon fell apart.
I wont go through all the game mechanics. My advice is go over to YouTUBE and watch the video series the guys at Too Fat Lardies have posted on CoC. They are well worth a look.
Part one is here:
http://youtu.be/XiT70m6CJO8
In short. A great game. I highly recommend Chain of Command to you all!
Thanks to the guys who put the game on and to my opponent Dean from Sydney. The terrain and miniatures were first rate and Dean was a real gentleman to play against.
Posted by Trailape at 3:43 AM

Great looking game. Got to love those 4Ground mdf buildings.
I have CoC but still in unplayed pile !

Wow! That is a terrific looking game. What a pleasure to game with such outstanding pieces.

G'day Trailape. Glad you enjoyed the game. Thanks for posting!

Nice report Scotty - great to catch up as always mate.