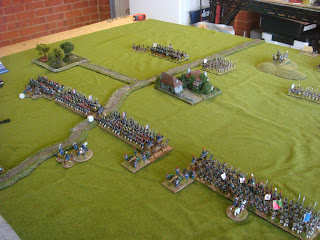 ABOVE: The French Corp of two Divisions with a Heavy Cavalry Brigade deploy for battle,.. "Ahhhh Prussians again".
Stan and I decided to play a game of FIELD OF GLORY: NAPOLEONIC (FOG-N) over the weekend.
Now I'll start by saying that this IS NOT a review of the rules. The truth is you can find plenty of them on the web.
No, this is really just some observations.
Now some of you may know that my preferred rules for Napoleonic gaming are LASALLE.
So is FOG-N better than LASALLE?
Well, there is no easy answer to that question, and that's because both rule systems are aimed are different levels.
LASALLE for example is a BATTALION level game. That is to say that you the gamer are manoeuvring Battalions on the tabletop within a Divisional Organisation.
FOG-N on the other hand is a REGIMENTAL (or what I like to call a Multi-battalion) level game which is played within a Corps level organisation.
Now you would think Multi-Battalion means you are moving Brigades, but no, not necessarily. In FOG-N you 'Units' (4 or 6 bases) can be a small unit of only 4 Battalions, or you can add on 'attachments' of Artillery, 'Skirmishers' or cavalry or have an 'Officer attached (Brigade Commander). You an also combine additional units of infantry, cavalry or Artillery to form Divisions.
The fact that FOG-N is a 'Regimental' level game is quite controversial in my opinion, as traditional Napoleonic wargames are fought at Battalion, Brigade, Division or Corp level. Using the Regiment seems at first somewhat odd.
But here's the thing,.....
It works.
LASALLE can be used to fight battles within LARGER battles, such as the attack by the French on La Hay Saint during the Battle of Waterloo.
FOG-N could be used to fight Waterloo, (though this would be a BIG game).
Now the first thing you notice when playing FOG-N is that it's complex. Well in comparison to LASALLE that is but then again a robust game of Connect 4 is complex in comparison to LASALLE also.
FOG-N flows quite nicely, it's just there is a lot within each phase of play you need to come to grips with.
This system was built with the competition gamer mind.
There are rules coving terrain placement, Flank marches and Reserves off table and each army must deploy a Line Of Communication (LOC) marker which when captured has a pretty sever effect on Moral across the entire army.
It simulates the battles of the period quite well. In very simple terms Armies are classed as Un-Reformed (those nations still moving and fighting in lines) and Reformed (those nations that have adopted the Column as the preferred method of manoeuvre and assault).
Austrians in 1801 for example would be classed as Un-reformed and most French and the Prussians in 1813, Reformed.
Where there is a big difference from LASALLE (apart from the scale of battle) is that movement by units is broken down to 'Simple' or 'Complex'.
An advance straight ahead for example is 'Simple'. An assault when disordered by enemy fire or forming square when being assaulted by Cavalry is 'Complex'. Complex moves can only be performed when there is a Commander within range who is willing or able to expend Command Points (CP) to enable the unit in question perform the manoeuvre, (or an additional CP if outside command range).
Failure to past the test can see units suffering penalties such as a fall in cohesion, (not good). What's really cool is that CPs are modelled by the use of ADC figures. Now I can have a whole bunch of young officers on horseback dashing about the battlefield relaying orders from Corps Commander to Divisional commanders and then to the units that need orders to conduct 'Complex' manoeuvres, HUZZAH!!
You could you counters or poker chips, but where is the Dash and Bravado in that?!
Stan and I discovered in our game that once cohesion losses start to build up, sooner or later units become static and or fall apart and as one routs, others soon follow.
The Army Lists are also very different, (not surprising). In LASALLE you build a Division from a set list based on theatre of operation or campaign, with optional supporting Brigades or Allies that are also set.
In FOG-N you have a points based system where you have Minimums and Maximums from a core list to chose from and then chose form a list of 'Attachments', 'Options' and Allies. In short you have far greater flexibility in the composition of yourFOG-N Army (Corp) than you do in your
LASALLE Army (reinforced Division).
What is similar about FOG-N and LASALLE is the gradual collapse in unit cohesion. Units fall from STEADY to DISORDERED to WAVERING to BROKEN (routed).
Basing in 15mm is also (thankfully) the same.
I enjoyed my first couple of games of FOG-N and will continue to play more games.
I don't see these rules replacing LASALLE, they just give me another level at which to play.
Ok, below is some photos of our game. 630 points each side. Enjoy, and as usual please feel free to leave a comment. 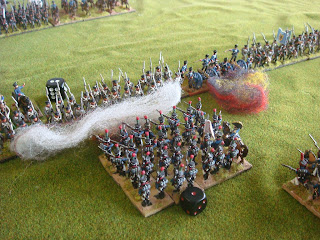 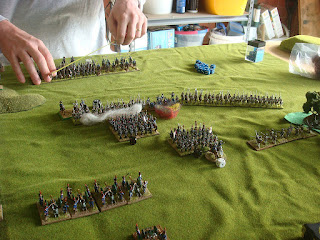 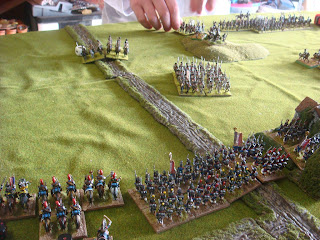 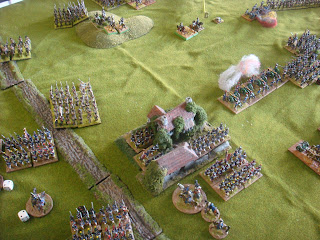 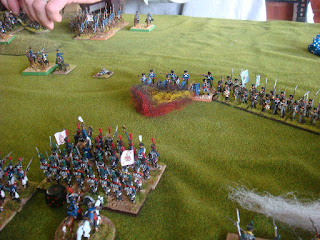 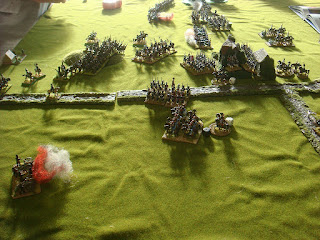 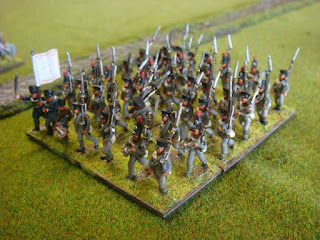 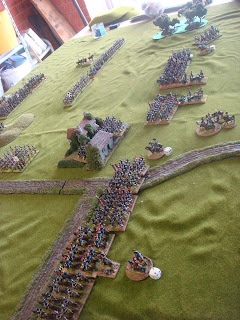 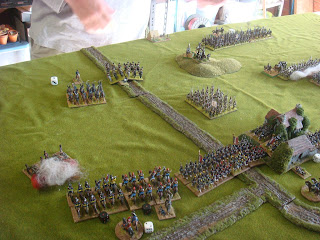 Great looking game. Interesting rule system too. Thanks for posting.

Really enjoyed your post, I agree with you, it looks like a good grand tactical game. I am setting up the Placenoit scenario from the book just to see how it looks on the table. Hope to get in a real game soon.

I bought the FOG-N rules recently and not had time to read, let alone play!

Hi Guys
I hope to play a 800 point game on the weekend. Time will tell. T\I do think they (FOG-N) are a great set of rules. I'll stick to LASALLE for Battalion level games, but when I want to play at CORP level I think FOG-N will take some beating. I'll be very keen to see if Sam Mustafa's 'BLUCHER' rules will be a better set.

hi all i am dimitris from greece a veteran napoleonic gamer .
today i had my second FOG-N game at 800 points with french against british .
i have to say i love these rules
i was playing lassale and reslly liked them but from now on fog-n will be my set for napoleonic gaming

Hi Micheni
I hope to get a 800 point game in this week.
Cheers

Hey Scott ,
Me and a couple of others at the LoA are starting FoG N . I've had 2 games , we'll be playing one next meeting (20th May) if you want to join in .
Richard

Informative review and nice piccies! Have you ever played General de Brigade? if so hwo do those rules compare to GdB?

Great blog by the way.

LOA brothers in Melbourne are trying FOGN. And they like it.
I'm old school Empire but master painter Peter Cross et al are playing
a streamlined Empire in Brisbane.
Is LASALLE really a battalion game?

Hi
I dislike Empire myself, (to complicated), but I do like FoG-N. LASALLE is a Battalion level game, in other words you manoeuvre individual battalions.
Actually, I like all of Sam Mustafa's rules that I've used thus far, LASALLE, Maurice, Fast Play Grand Armee etc.

I like these photos! May I upload one of these to Wikipedia? I want to use them in the articles for miniature wargaming. Would you release them to the public domain?