A Tale of Two Farms. PART 2 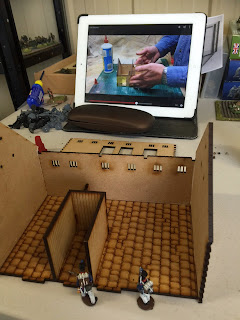 ABOVE: Two Perry Miniature 28mm French Infantry scope out the barn. How much blood will be spilt capturing the place?

Hi Team
Well, its been some time coming but finally I've arrived at PART TWO of my review of both BATTLEFIELD ACCESSORIES (BA) and WARLORD GAMES models of La Haye Sainte farm sets.
After comparing contents of the two sets in PART 1 in this and following posts we'll look at construction and the level of detail in the respective models.
Let's start with the Aussie offering from BA.

One of the things I really like with BA's models is the VIDEO tutorials on construction you can access via YouTube.
These are a real God send!
As you can see I watched the videos on my IPad as I constructed the kit and the little tips on construction are simply excellent.
Construction proved to be pretty simple. Honestly there wasn't anything tricky here. Anyone with even the slightest experience in model construction would find assembly pretty straight forward.
Assembly was rather intuitive for the most part.
I was impressed with the details included in the models including interior walls and staircases and lofts in barns. 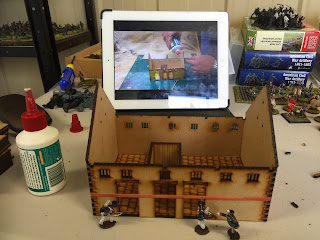 Ensure you have a good PVA / White Glue, (I like Selleys), an old paint brush for cleaning up any access glue, and PEGS,... lots of pegs!!!
I also found rubber bands to be useful tools as you can see. 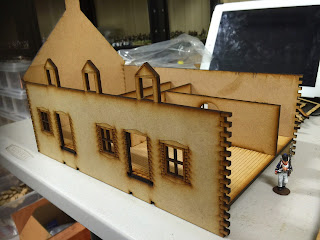 I found the model to be simple to construct (did I mention that).
I assembled the ENTIRE farm set including sheds, walls, main gate house, farm house, Coach house, barns etc in a single day. I started at 9 am and was finished by 5pm including a hour long lunch and a couple of brews. 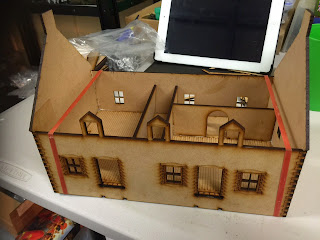 It's fortunate that assembly is so simple and that the videos on YouTube are available because there are no written assembly instructions to speak of, just photocopy images.
The detail available in the photocopies is rather poor but ultimately it wasn't an issue so "Meh". 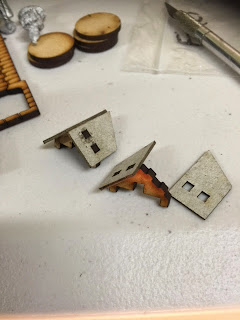 ABOVE and BELOW: Probably the trickiest part of the assembly, the roof and second story windows. 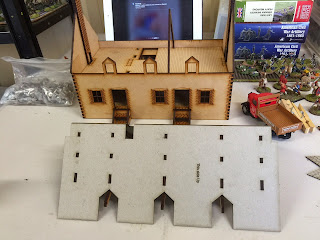 BELOW: I did say LOTS of pegs. 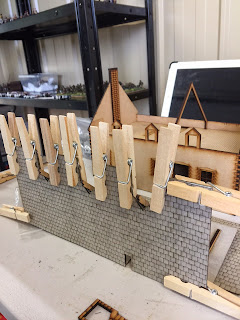 BELOW: The second story of the Main farm House. 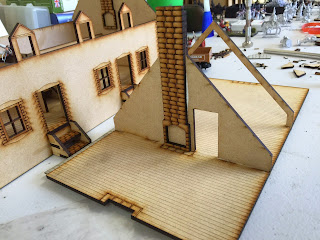 TIP: For ensuring you get walls squared to the floor I use a laser cut 60mm square base and use it as seen below. By butting it up agains the wall as it sets you get a perfect Right Angle / 90 degrees. 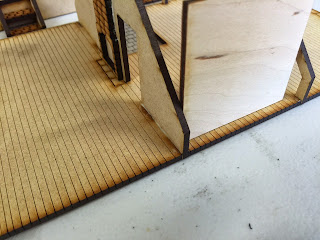 TIP: Use some of the 'Punched Out' off cuts as braces for internal walls. Not really required but it cant hurt IMHO. 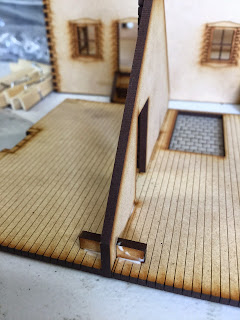 BELOW: A nice view of the interior of one of the barns 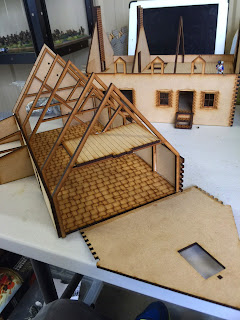 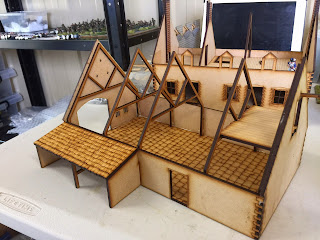 BELOW: Two of the nifty little shed that but up against the farms walls.
I believe these might eventually be available as separate items to add to 'other' BA models. 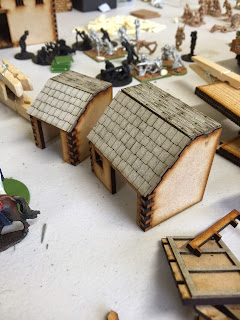 The overall quality of the entire set is EXCELLENT and is well worth the asking price. 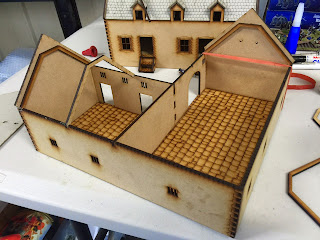 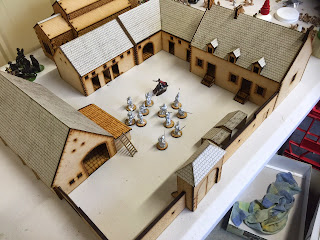 ABOVE: The COMPLETE FARM SET
Part Three will cover the WARLORD GAMES La Haye Sainte model and a direct comparison of the two farms side by side
Posted by Trailape at 11:56 PM